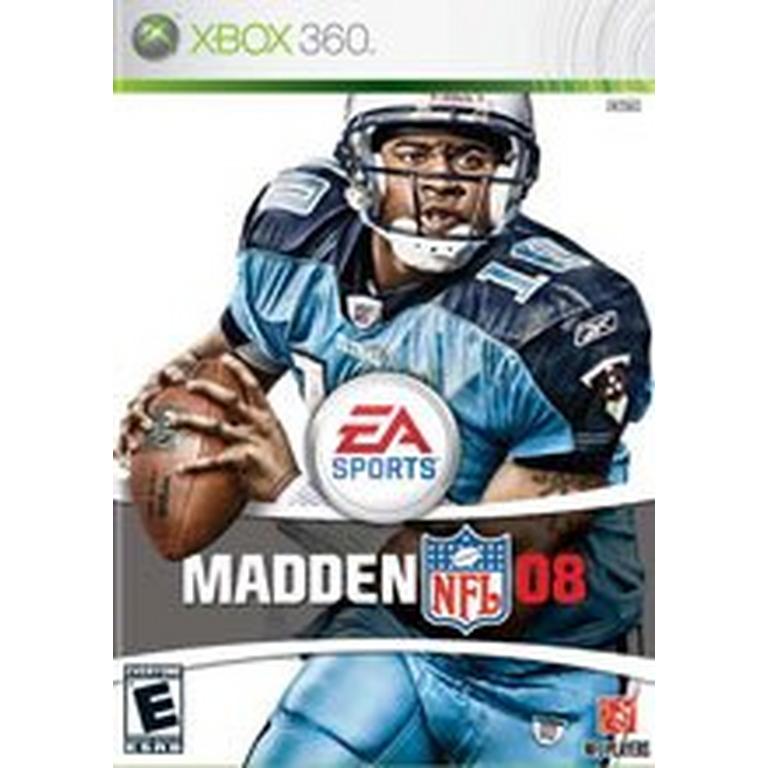 Feel what it's like to be a field general making key personnel decisions on both sides of the ball during the game's biggest moments in Madden NFL 08. Quickly identify your strongest players on the field before every snap then move them into position to make game-changing, momentum-altering plays. Play to your team's strengths by immediately reading your opponent's schemes and reacting to the action as soon as the ball is snapped. Create mismatches and exploit weaknesses as you read and react with Madden NFL 08.
More Details Less Details

1. So, the natural question, what are your thoughts/concerns on the supposed ‘Madden Curse'?
No, no concerns whatsoever. I've always been a man of God and I put my faith in him to keep me healthy and if something happens it happens. But hopefully I'll be able to stay healthy and help my team make it to the Super Bowl.

2. What superstitions, if any, play into your own pre-game rituals? What's the most bizarre one you've ever witnessed?
The only thing I do is put on my iPod and get jamming, maybe some dancing too. Can't say that I've seen anything bizarre…Kevin Mawae walks around the locker room in a Hawaiian skirt but nobody is going to say anything to him about it. Whatever it takes to get ready for a game

3. Of all your teammates, who would be the toughest to beat in a game of Madden?
I've played against a lot of guys who take it serious. Probably the best I've played against on a regular basis is Roy Williams. He wins sometimes, I win sometimes. We have a lot of fun playing though.

4. After one year in the league, who's the hardest hitter in all of football?
I would say either Sean Taylor from Washington or Robert Griffith from Arizona. I've watched lots of film on both of them and you always have to know where they are every single play. They can bring it big time. But after going to the Pro Bowl I havemuch respect for defensive players. They can be out there trying to make the big hit but and take you down but they're not out there trying to hurt you. Ray Lewis – tough guy and he comes to play but he treats you with respect.

5. Who had the best touchdown celebration of all time?
No question, Ernest Givens doing the electric slide for the Oilers back in the day. I remember playing Pop Warner football back in Houston and everyone was doing it.

6. Of all the great players, both past and present, who would make up your “dream” backfield and receiver corps?Oh, I would have to say LT (LaDainian Tomlinson) in the backfield, Chad Johnson and Andre Johnson at receiver, Reggie Bush in the slot with Tony Gonzalez and Antonio Gates at tight end. Throw Deion Sanders in with my defense now and nobody's going stop us.

Madden NFL 08 is rated 3.8 out of 5 by 22.
Rated 5 out of 5 by PD0GN355 from Best. Madden. Ever I bought this is 2020 and it is more advanced, has more modes, and better features than Madden 20 (2019)
Rated 5 out of 5 by Scott the woz from There a madden for me Madden '03 and 4, you play it for the lore Packed with stuff you've never done before Madden '97, turn it to eleven This game can cure all kinds of depression Madden 25, what, did we travel through time? (Nah, I mean it was pretty alright...) John Madden Football, now I've seen it all It shows how the mighty just refuse to fall Pick any game you want, you have my guarantee Because there's a Madden just for me! Madden Overdrive, not a nosedive EA Sports, you continue to thrive What's their bottom goal? Their honest intent? Providing players with pride and accomplishment Madden CD, oh boy, oh gee Why can't these things start growing on trees? Madden '08, it's nirvana on a plate
Rated 5 out of 5 by AlC1 from i love it That's good stuff i love madden nfl 08 xbox 360 i love vinc young and i also love it when they tackle.
Rated 4 out of 5 by BReview from Really fun game I'm usually not that big on EA games but, I bought this game to see if I'd like the Madden experience. And true to form it's a really fun game and EA did a better than usual job with it. For the price you can't beat it and, You'll just want to move on up the Madden food chain experience as I have. If your into Football at all. Since I purchased this one , I"ve moved on with the mass populace to enjoy the fun of the Madden football games.
Rated 5 out of 5 by RayDAgamer from GREAT GAME This is an amazing madden i love the graphics the gameplay and its challenging on all difficulties (except rookie) My Fav part of the game is superstar mode its so fun being a qb for a terrible team on rookie destroying other teams with 200 rushing yrds a game and a 100 passer rating even though your a 60 rating. this game is just awesome even though its 08 i have the newest maddens and i still play it even though its been 5 yrs. i definetly recomend playing it on a hd tv itll be even more epic
Rated 4 out of 5 by KillstreakXD977 from madden you impress again This madden game was great overall. The gameplay was simply fantastic you could absolutly dominate other teams. My overal opinion on this is that if you love madden this is the game for you. The only minor kink i would say was the sound sometimes john madden just has to stop interupting, but besides that you feel like you are actually playing in the telecast. Lastly madden live on forever.
Rated 2 out of 5 by Anonymous from Ugh There is a reason this game is worth one dollar. It sucks, even though it is 5 years old it still sucks, I gave this game away less than a few months after I bought it, and Madden 09 was the last Madden I felt to buy. Now 06 was excellent.
Rated 4 out of 5 by skullkruncher007 from good if.... its a good game dont get me wrong but if u are an achievement hunter like me then you will need this

can i play this on my xbox one?