Sea of Thieves is a multiplayer game that delivers all you need to live the free-roaming pirate life. Whether adventuring as a group or sailing solo, you'll encounter other crews... but will they be friends or foes, and how will you respond?

Sea of Thieves offers the essential pirate experience, from sailing and fighting to exploring and looting – everything you need to live the pirate life and create all-new legends.1

With no set roles, you have complete freedom to approach the world, and other players, however you choose.

Whether you're adventuring as a group or sailing solo, you're bound to encounter other crews in this shared-world adventure game – but will they be friends or foes, and how will you respond?1

A world of exploration

set sail upon a vast, open ocean, venturing into new regions and discovering the secrets of unspoiled islands and sunken ships. Hunt for treasure by following maps and untangling riddles, and learn to expect the unexpected...

A world of excitement

engage in ship-to-ship crew battles with cannon, pistol and cutlass, pursuing rival ships through raging storms. Sail in pursuit of deadly bounties or ferry cargo through hostile waters. Clash with the skeletal remains of cursed former pirates and beware undersea menaces that lurk beneath the waves!

A world we sail together

whether you're playing alongside friends, matchmaking to find a crew or setting out as a ‘lone wolf' pirate, you'll have hilarious, memorable encounters in a world where every sail on the horizon is a crew of real players.

A world of achievement

on your quest to become a pirate legend you'll amass loot, build a reputation and customize your ship (and yourself) with your hard-earned rewards.

Sea of Thieves is rated 4.0 out of 5 by 416.
Rated 4 out of 5 by WetBilly from Don’t go it alone Fun game to play with friends. Playing alone isn’t as fun.
Rated 2 out of 5 by creativename from Beautiful game, not worth the price Rare used to be a great developer, but ever since it was purchased by Microsoft, it has dramatically gone downhill. When first starting up this game, which takes up about 10 to 50 gigs of storage, you may think that you're in for a treat with the beautiful graphics and the pirate-themed music. But soon, you will realize the big mistake you have made. First off, the game is filled with people who have hours on hours into this game, who will ruthlessly destroy any new player that they find. When you choose your ship, you will find that you start with 3 ship options: The Galleon, which is the largest and strongest, yet also the slowest, the Brigantine, the medium ship that people should choose when in groups of 2 to 3, and the Sloop, the smallest ship that is best for solo players. You will notice over time that these are the only ships that you can get. There is no actual progression, besides cosmetic, so you can't upgrade your ships or weapons. Then there is the actual ship operations. I personally enjoyed the operating of the ships. There isn't an actual guide in the entire game except for treasure maps, so you have to learn how to drive the ship yourself. Speaking of treasure maps, you can go on quests to search for treasure chests. As you progress, you can unlock harder quests that give you greater rewards, but then again, these rewards are either cosmetics or coins that you can only buy cosmetics with. When you first start the quests, they are actually quite fun, but you'll notice that they get extremely repetitive. After completing quests, you get treasure chests which you have to return to an outpost and sell it to one of the shopkeepers. But there are a surplus of players who tend to camp at the outposts, wait for players trying to sell their chests, kill them, and take the chests. You'd think that if that was a big problem, then you would just switch to solo mode or play with your friends in a private server. But, surprise surprise, there's another problem with that; online mode is the only option. Oh, and after you die from one of the outpost campers, or die at all from anything, you restart completely at a different island with none of the stuff that you earned. The game is very boring unless you're playing with friends, or someone who you met in game that for reason didn't kill you. So it's the same situation as Fallout 76, you're only paying for half of the game. And since Rare is owned by Microsoft, you can only purchase this game on Xbox or a Windows computer. In conclusion, Sea of Thieves is a huge disappointment that Rare is too unmotivated to fix, and you shouldn't get it unless there is a huge sale or you have Xbox Game Pass.
Rated 5 out of 5 by oTrap Jr from Sea of thieves Fun with family and friends to battle ship and loot treasure
Rated 1 out of 5 by Mouseyrobert gt Xbox from Not happy with it. Cant advance Won't let me advance past building the ship and sailing around the island.
Rated 1 out of 5 by Golfnut1969 from What a waste of money I bought this game and played about 20 hours. The cartoonish style is annoying, and the game play is really bad. I found myself completely frustrated after an hour or so, but I wanted to give this game a fair shake, so I continued on, planning on playing at least 20 hours. After 20 hours, I couldn't wait to quit. Looking forward to Skull & Bones, as this game was a bust.
Rated 5 out of 5 by Chelledagr8 from Good game My son seems to be enjoying playing this game every day.
Rated 5 out of 5 by Cypher516 from Sea of Thieves Great collaborative pirate gameplay. It has enough for the gamer to really create their own adventures. It shines in its social.
Rated 5 out of 5 by Yusufu from Great game to play with others Great game. Lots of updates. Find people to play with on discord

whats the difference between the pre owned and new?

Asked by: crystals4
Really nothing except one comes with all it's books and content and no scratches.
Answered by: Wazupbutrcup

Asked by: Shari Fridman
I do not believe that will work. The play anywhere is for digital only anyways.
Answered by: ewalt89

Can this game be played solo or do you need to play with others?

Asked by: Diecast
Solo and Multiplayer up to you
Answered by: Little shark

Can you play this game solo or do you need to play on line with other players?

Asked by: Diecast
Sea of Thieves is an online-only game. While you don't have to play with other players, it's highly recommended to get the most out of the game.
Answered by: MicrosoftOutreachTeam

I pre ordered xbox one sea of thieves &quot;digital version&quot; I got a code on the receipt for beta access. But no code for the game itself. I checked back today to see if the game was in my queue, it was not. How do I get the actual game, not just the beta?

Asked by: SKINNUTZ
you have to go into the store to pick up your code
Answered by: hd45

I pre ordered the game to get the black dog pack, but the code is not on my receipt. The receipt does show that it was a pre order pick up though?&nbsp;

Asked by: Smith23
I had the same issue with my pre-order. Try going to your local gamestop and asking them about it and see what they can do. I'm still working on mine so if you get a response please let me know as well.
Answered by: ChrisY91

Can the Xbox download be purchased and redeemed on PC through the Windows Store? I no longer have an Xbox but would like to buy this on PC in the near future, so trying to figure out how best I can do that.

Asked by: madmatt213
You would have to buy the Xbox version digitally and you will get the windows 10 version free from the Microsoft store. Just make sure you use the same email from your windows machine and you Xbox gamer tag.
Answered by: Jgale

Is it possible to buy a game let&rsquo;s say today and come in and pay for it the next day?

Asked by: Nolan1718
to get a game it must be paid for in full otherwise the store will not let u walk out with the game and that goes for online purchases as well u cant play the game without paying for it at the time of purchase
Answered by: demon321 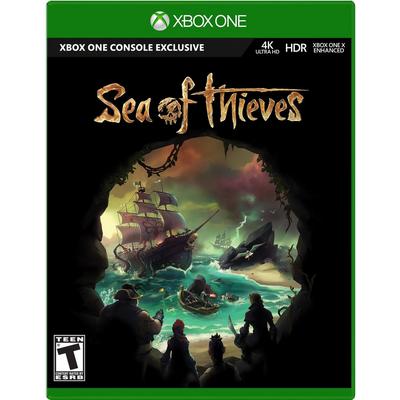 Sea of Thieves
Xbox One