A high-definition version of the phenomenal GameCube remake, complete with updated controls and widescreen mode

Rare, minor clipping visuals don't detract from the presentation. This is still a beautiful, atmospheric masterpiece

Listening for every zombies' footfall and awful moan is not only creepy as hell, it's necessary for survival

With the new modern control scheme and new easy mode option, this is now the most accessible entry point into the classic RE formula

The PlayStation-era of games is often criticized as a generation that has aged poorly, thanks to muddy 3D visuals and controls. The 2002 GameCube remake of 1996's Resident Evil fixed the former, but some still found the infamous tank controls cumbersome. This new remastered HD iteration frees the game from its sluggish shackles like a doberman freed from its winter booties.

The visuals have received an impressive overhaul, from the exquisitely detailed backgrounds to the 3D character models. You can even play as Jill or Chris as they appear in RE 5 - it's a fun treat seeing these alternate appearances in cutscenes. Some vignettes are still terribly graining, like draining the courtyard pool or the end credits, but for the most part the mansion looks appropriately creepy and worn in. I did notice some minor graphical issues, like limbs or shadows clipping through bookcases or doors, but they're rare enough that they don't distract for long.

The new widescreen view is great as well. The zoomed-in 16:9 perspective sacrifices some of the vertical screenspace from the original 4:3 view, but at the benefit of a wider horizontal axis. The changes, including the subtle camera panning, are subtle and it's become the way I prefer to play.

Speaking of preferred play styles, the biggest changes involve the new control scheme and easier difficulty option. The modern control scheme allows players to move in the direction they point the analog stick, opposed to the classic tank controls. The result is a liberating, intuitive, and immediately satisfying. Unfortunately some of the enemy AI can't compensate for the S.T.A.R.S. team's newfound agility, trivializing certain battles. For instance, I can now safely slash a single zombie to death with a knife and run circles around the giant snake boss. However, the game still retains its rewarding difficulty when players are faced with multiple threats. Unfair challenges sometimes flare up due to quick camera angle transitions where the view wigs out, occasionally leading to a few frustrating zombie chomps. These instances were very rare, however.

A Harrowing Prequel Adventure Worth Revisiting

The updated control scheme does wonders, but the clunky inventory management is showing its age

The smoldering, destroyed helicopter of the S.T.A.R.S. Bravo Team is one of the first sights to behold in the original Resident Evil. Jill Valentine, Chris Redfield, and the rest of the Alpha Team crew have little time to investigate what happened to their lost compatriots before they're forced to flee into a nearby mansion to avoid becoming puppy chow. Resident Evil 0, set a day before the infamous Mansion Incident, explores the journey of S.T.A.R.S. Bravo Team medic Rebecca Chambers and an unlikely ally through Umbrella's nasty facilities. Capcom has given this GameCube prequel from 2002 the same treatment as last year's HD update of the excellent Resident Evil GameCube remake, complete with more accessible control options.

Resident Evil 0 is the last hardcore survival horror entry in the series, before the juggernaut Resident Evil 4 sparked a dramatic paradigm shift away from the demanding resource management, complex puzzles, and fixed camera angles. Rebecca teams up with fugitive Billy Coen as they explore a runaway luxury train, abandoned Umbrella Training Facility, and other appropriately ominous locales that tie into the early RE games in fun ways. Controlling both Rebecca and Billy, sometimes simultaneously, is a unique departure from the standard formula. The new control scheme - which eschews awkward tank controls in favor of characters moving in the direction of the analog stick - works wonders here, especially when controlling both characters with both sticks at once. The more agile characters don't break the balance of the game, either, as sloppy play will get you chewed up by zombies or swallowed whole by mutant frogs.

The original 1996 Resident Evil kicked off an early series tradition of magically interconnected storage boxes. Before settling on that design decision, Capcom experimented with not having them connected, and instead tasking players with lugging all their guns and items around the game with them. Resident Evil 0 returns to that concept, but instead removes all the boxes entirely, allowing players to leave items anywhere on the map. While it's initially liberating to quickly toss out your knife or an unwanted ink ribbon, the system can become tedious. Trying to angle your character just right to pick up an item can be tricky, especially if the new, optional zoomed-in widescreen mode cuts an item you're looking for out of the shot. Additionally, nearly as much time is spent swapping ammo and items between characters as exploring the creepy environments, which can hurt the pacing.

Resident Evil 0, a remastered version of the popular prequel to the original Resident Evil game, is coming to PS4, PS3, Xbox One, Xbox 360 and PC in early 2016. This remastered version takes the fear-inducing atmosphere from the original 2002 release and transforms it with stunning new HD visuals, improved sound, widescreen support and an optional modernized control system and more. Both series fans and newcomers alike can experience the story of what really happened before the iconic mansion incident that was the catalyst for the entire Resident Evil saga.

The story of Resident Evil 0 takes players back to 1998. Reports have been mounting about unusual murders on the outskirts of Raccoon City. The city's Special Forces division, S.T.A.R.S., sends their Bravo Team - including rookie cop member Rebecca Chambers - to investigate. On route, the team's helicopter suffers engine trouble and is forced to make a crash landing, where they find an overturned prisoner transport vehicle. Splitting up to search the area, Rebecca discovers the Ecliptic Express, a train stopped dead on the tracks. Inside, she meets death row convict and ex-Navy lieutenant Billy Coen. Throughout the game, players will take control of both Rebecca and Billy, at times switching between both characters in order to proceed. Learning the advantages of each character is the key to solving puzzles and surviving the nightmares that lie ahead.

The hugely popular Resident Evil® series, having sold over 62 million units to date, returns to its roots with a remastered version of the critically acclaimed masterpiece, Resident Evil . Originally released in 1996, Resident Evil was then “remade” in 2002 from the ground up with new visuals, gameplay elements, environments and story details while retaining the survival horror atmosphere the series had become synonymous for. Both fans of the franchise who want a trip down memory lane and those who have yet to experience the game that coined the term survival horror for the gaming world will appreciate this definitive re-visit of that iconic 2002 Resident Evil title.

The intense horror fans first experienced with the release of the original Resident Evil is back. Taking place in the now notorious Raccoon City, players will choose to take on the role of either S.T.A.R.S. (Special Tactics and Rescue Service) team member Chris Redfield or Jill Valentine, who have been sent into the city to find the missing Bravo team. When the team is suddenly attacked by a ferocious group of mutated dogs, desperate for an escape they take shelter in the Mansion, but will they ever get out alive again? Players will need to be brave as they adventure through the dark, enclosed spaces searching out the horrors that await them. With limited ammo and survival items available gamers will need to keep their wits about them to survive the various traps and puzzles that greet them at every stage.

Resident Evil Origins Collection is rated 4.3 out of 5 by 104.
Rated 4 out of 5 by Martin sandwich from 2 great games in one sandwich packed disc! Resident evil zero is good, resident evil remake is a classic! It started the famous Jill sandwich line!
Rated 2 out of 5 by Richard the ggvvccfhh from Watch YouTube before you buy Not what I was hoping for, I was looking for a remastered version that made it more like RE4 to RE6 but not the case, might be great for others but not for me
Rated 3 out of 5 by Techno1 from Too much backtracking I love the Resident Evil games don't get me wrong. However the backtracking in this is absolutely " horror-endous" lol
Rated 3 out of 5 by Richard the ggvvccfhh from It's ok for the money It's cool and all, just hate dying and having to start all over cause I couldn't save beforehand,
Rated 5 out of 5 by Nailor21 from It tons of fun imo! First time I’ve played the first resident evil and I love it to be honest. Yet I have not started on zero yet, but if it is anything like the first resident evil then let’s assume I love it as well!
Rated 5 out of 5 by Raffe from Well worth playing! Great Remake! Loved both games. Loved the remade Part 2. Hope they remake part 3!
Rated 5 out of 5 by BloodQueen from Great Game I really enjoyed this game. The graphics weren’t too bad and it was fun to play.
Rated 5 out of 5 by Horror fan FTW from It’s let’s you know that nothings good coming Wonderful brings me back to the Original horror with a Update feel 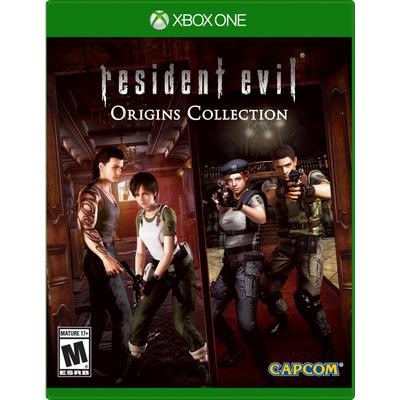