Blood
Suggestive Themes
Violence
Naruto Rise of a Ninja is rated 4.1 out of 5 by 64.

Blood
Suggestive Themes
Violence
Naruto Rise of a Ninja is rated 4.1 out of 5 by 64.
Guide Naruto from the series' beginning along his ninja training and rise to power. Relive t Read More
Please Choose An Option

Because his body holds the Nine-Tailed Fox Spirit, Naruto grew up disliked by most of the people in the Leaf Village. As a child, he gained a reputation for being a troublemaker. However, he is trying to change his ways and become a truly great ninja. Naruto is enthusiastic and powerful, but he rarely thinks before jumping into the action. This gets him into trouble on more than one occasion. Naruto has his teammate, Sakura, whom he has a crush on, and Sasuke, who is also his rival.

A genin from Sand Village who comes to the Leaf Village for the Chunin exams, Gaara is actually somewhat like Naruto. That is, he has a demon living inside of him. However, where Naruto has made friends and is no longer isolated, Gaara has no friends and everyone in his village fears him. This has made him angry and violent. Gaara's demon protects him and gives him special powers, making him extremely difficult to defeat in battle.

Kaskashi is jonin, elite ninja who is assigned to look after Squad 7. Although he is always late and may seem flaky and scatterbrained, Kakashi is actually one of the best ninja in the Leaf Village. He's tough on Naruto, but is secretly proud of the work of all the members of his team.
As a Master, Kakashi will give you Ninja Missions and train you to become a better ninja!

A genin from the Village Hidden in the Leaves. He is teamed with Hinata and Shino. Wild in both personality and appearance, he moves around with his ninja hound Akamaru. Their relationship and trust runs deep. His special jutsu are the Man Beast Clone, a joint jutsu carried out with Akamaru, and a secret Beast Man Taijutsu that is called the Fang Over Fang. Akamaru can smell an opponent's Chakra and determine the extent of that person's strength.

Genin from the Village Hidden in the Leaves, he is in the same squad as Rock Lee and Tenten. He is Hinata's cousin and a genius, but feels constrained to the branch family of the Hyuga Clan. Neji uses the Byakugan Kekkei Genkai: a bloodline trait handed down genetically within the Hyuga Clan. His special techniques are the 8 Triagrams Palms Rotation and the 8 Triagrams 64 Palms.

Sakura is in Squad 7 with Naruto. She's very smart and has great control over her chakra. Her jutsu are not necessarily strong, but she is knowledgeable in the properties of herbs.
She thinks Naruto is a screw-up and the Squad 7 would be much better if it was just her and her beloved Sasuke.

Sasuke is the third member of Squad 7. He is considered a genius, with the potential to be the best ninja of his generation. Naruto struggles to outdo him on all of their missions. At first, Sasuke regards Naruto with contempt. but eventually comes to see him as a worthy rival and their competition becomes a way of encouraging one another to improve.

Zabuza became renowned as a member of the Hidden Mist Village's AnbuBlack Ops Unit. After a failed attempt to overthrow the Mizukage several years back, he fled the Land of the Water with his followers. His true motive is not clear, but the blade of his ambition was not shattered.

A former elite Tracker Ninja, he was adopted by Zabuza and taught combat jutsu. Faithful to Zabuza, he will not forgive anyone who endangers him. Behind his mask is a face as beautiful as a young girl and a painfully sad past.

Orochimaru is a former student of the Third Hokage, but he has left the Leaf Village and turned to evil. He is an incredibly skilled ninja who wants power more than anything else. He specializes in forbidden jutsu, but he is also very good at summoning jutsu, particularly involving the summoning of snakes.

A genin fro the Village Hidden in the Leaves. Though his Ninjutsu and Genjutsu skills are pathetic, his Taijutsu is outstanding as a result of his constant training. From his hairstyle to his sensei, everything about Lee is intense. Like Naruto, he too is in love with Sakura.

If this playable on Xbox one?

Is this game playable one the Xbox one?

Asked by: Macleonie
No, Ubisoft no longer has rights to the Naruto Series so unfortunately I dont think this game will ever make it to Xbox One unless Bandai buys it from them.
Answered by: Levon123
Naruto Rise of a Ninja is rated 4.1 out of 5 by 64.
Rated 5 out of 5 by Sam Collins from More reasons GameStop is amazing The game was extremely easy to understand and play. The graphics and movement quality is good. And it was in an immaculate condition. Also the service was amazing on finding the game, purchasing, and creating an account.
Rated 5 out of 5 by Anonymous from Beginning This game starts you at the very beginning of the Naruto series. I enjoy it.
Rated 5 out of 5 by Jhgd from Extremely fun I bought this a couple weeks ago and I have had a huge blast
Rated 4 out of 5 by Theta from Nostalgia I love the Naruto series. I bought this game when it first came out on the Xbox 360. I had so much fun playing this truly amazing game! I was thinking back when I first watched the very beginning of the Naruto series, talk about an amazing anime! This game brought back the awe and wonder I felt when I watched the anime.
Rated 4 out of 5 by TomoyaOkazaki from It Was Alright. The games was okay. I mean, the Broken Bond is basically a sequel to this game and is obviously better. The game has great fights and don't get me wrong. But, I hated that you only play as Naruto. I bought this game not too long ago, last week to be exact. Anyways, it was too short as well. That and the races were kind dumb as well. They were fun and all but some people would take some time to do them because it would take a bit. But, not a bad game.
Rated 4 out of 5 by wham100 from Nice for the first try overall this is a pretty decent game with problems that made the game feel really repetitive. This game had issues with the voice actors not actually being the ones from the television show. But overall it was fair
Rated 1 out of 5 by HALOGOD116 from Disgrace to naruto first off where are all the characters second why is rock lee so fast like people who first use rock lee are going to automatically win because you cant stop him and last why is the story so short you can beat it in hours. if you ask me get the broken bond you will really be satisfied
Rated 5 out of 5 by Landpie from Great awesome, perfect Classic Naruto game for XBOX360. Sometimes you just gotta play the classics, and you know, Naruto is cool. 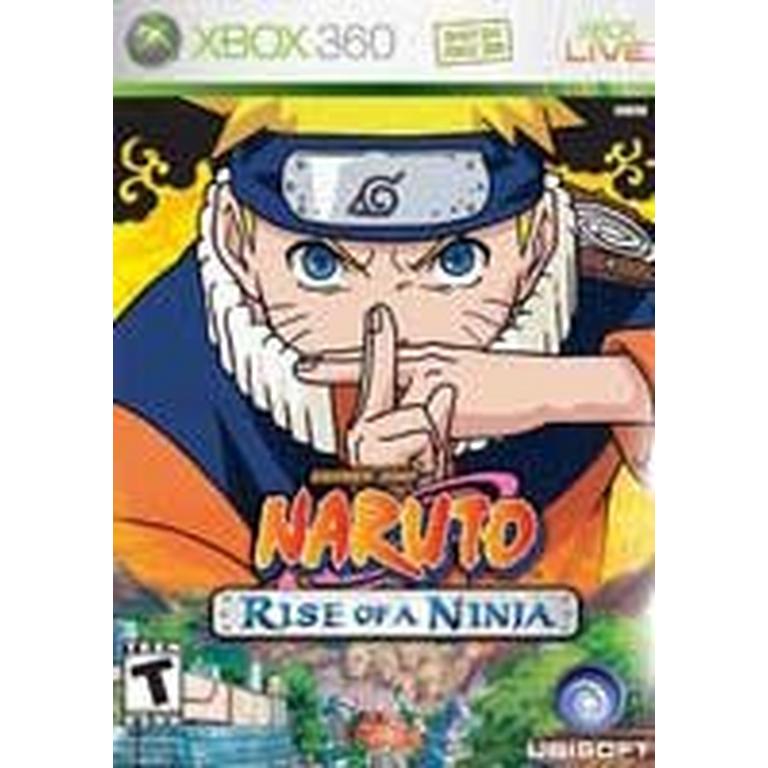