Trade Value
The kingdom of Romulea is in peril. Monsters are leaking out of every nook and cranny in the Read More
Please Choose An Option

Trade Value
Select Condition For Availability
The kingdom of Romulea is in peril. Monsters are leaking out of every nook and cranny in the land and have started an uprising against humanity. Players take on the role of Fried, an adventurer from the Royal Library sent to stop the uprising. Early in his journey, Fried discovers a broken shrine. This sets in motion the story where Fried travels around the kingdom, and through rescuing, defeating, or bumping into any of the 16 unique girls that can join his party, he is on a mission to save the world. Set in a first-person perspective with turn-based combat, players will encounter normal monsters as well as more powerful mutant girls, who must be sealed away to prevent the spread of the evil monster scourge.

Art That is Sure to Leave a Mark

The hand-drawn art of the girls in your party, as well as the mutant girls who must be defeated, breathe scintillating life into the quixotic world of Romulea.

Defeating enemies in the dungeon produces Sealbooks, which can give the girls in your party unique bonuses, enchant weapons, or be sold for gold. Deciding how to use the Sealbooks is a crucial part of the game's dungeon-crawling aspects.

Turn the Party into a Par-tay

As you explore dungeons, players can trigger sub-events which allow for further character development between Fried and the individual girls in his party. Favorite girls can even show up in the menus (cosmetically) more often.

Each girl in your party has one of five base classes, from which they can spec into one of several sub-classes, which can be further specialized. For example, a Magic User can become a Sorceress, which can specialize into Magical Princess. Each sub-class has its own unique skill-set and corresponding armor/outfit, allowing for intricate tweaks for discerning party managers.

Dungeon Travelers 2 The Royal Library and The Monster Seal is rated 4.3 out of 5 by 4.
Rated 4 out of 5 by Potatolord1394 from Funn n Haven't played much of this game but it seems fun from the opening.
Rated 5 out of 5 by Anonymous from Another Great Dungeon Crawler The Vita already has a great library of Dungeon Crawler games. Games like Demon Gaze and Operation Abyss kept me busy for hours. Dungeon Travelers 2 fits into that genre very well. Like with Demon Gaze and Operation Abyss, the player will find themselves grinding to level up and perfect all they can with skills and defeating creatures multiple times for sealing with the main character. Once entering the dungeons, things will get more difficult as new enemies are introduced with stronger attacks and stronger magic. As long as the player grinds relentlessly, this will not be an issue. Graphics are right in line with the PS3 and above. The game, as a whole, is fun and grabs you to want to come back for more. Great dungeon crawler and fits perfect in the family of dungeon crawlers. Get this game!
Rated 4 out of 5 by GamingLegend from Great JRPG with classic turn base battle system The game is your typical JRPG. Grinding out experience to level up can be boring to some but it comes with rewards with a modified job system. At certain levels you change the jobs of each party member to suit the gameplay style you want for each of them to have. The music and graphics are top notch and the story is easy to follow. The turn base battle system is something I personally love. I would definitely recommend this game to any RPG fan, anime fan, or someone who enjoys turn base battle system.

Dungeon Travelers 2: The Royal Library and The Monster Seal 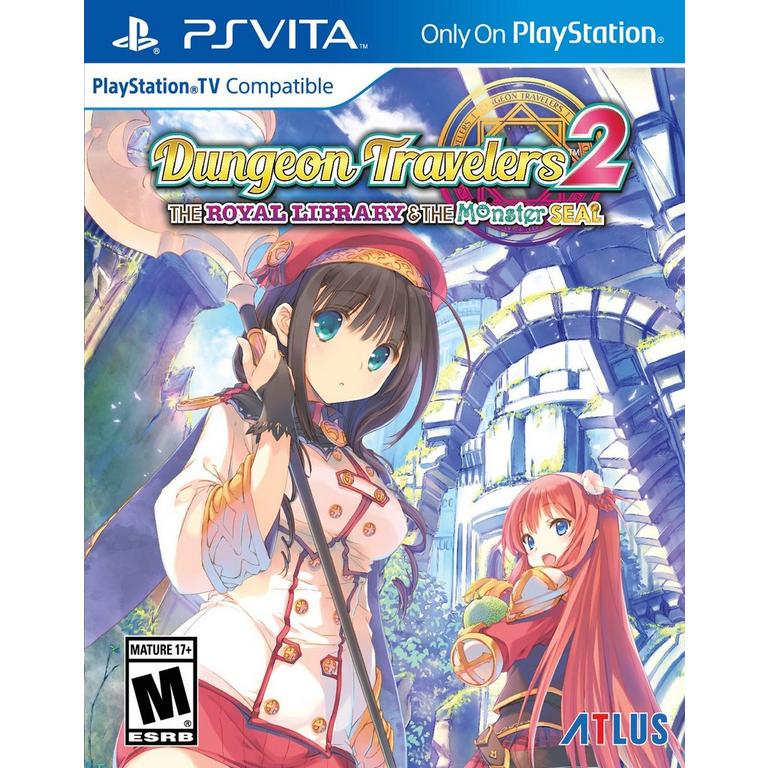 Dungeon Travelers 2: The Royal Library and The Monster Seal