Get it this way:
Free pick up at store with delivery@door
at
No availability within 15 miles. .
Change Store
Everyday Free Shipping $35+
DELIVER TODAY
(Only $5.99!)
Learn more
Deliver to
Verify Address Change
Please provide your address to verify you are within our delivery area.
Select Condition For Availability
Buy Together
Winner of Best Action Game at The Game Awards 2017, Wolfenstein II: The New Colossus is the highly anticipated sequel to the critically acclaimed first-person shooter, Wolfenstein: The New Order developed by the award-winning studio MachineGames.

A Bloody And Unforgettable Revolution

Retake America from the Nazis with a gun in one hand and a hatchet in the other in this epic, violent road trip

Character models and animations are top-notch, and the alternate-history versions of locations like Roswell and New Orleans are stunning to behold

Mick Gordon's soundtrack thumps and wails in all the right places, and the thunk of an axe sinking into a Nazi's skull never gets old

The first hour is challenging, but flexible systems make it a surprisingly forgiving shooter as the game goes on

Wolfenstein: The New Order was a bold, flawed attempt to reinvent the first-person shooter that kickstarted the genre. Taking place in an alternate history where the Nazis won the war, long-time protagonist B.J. Blazkowicz tried to take back the world with the help of resistance fighters hiding in the sewers of Berlin. Though the run-and-gun gameplay was satisfying, The New Order shined through its story, focusing on a diverse cast of people trying to hold on to scraps of hope and love. The sequel, The New Colossus, trades the somber tone to become a tale of fury and uprising, and in doing so emerges as both one of the best first-person shooters and narrative-driven games I've ever played.

The New Colossus kicks off on a grim note, with B.J. awaking crippled after the events of the first game. You are in the middle of the action almost immediately, roaming around a U-boat in a wheelchair and blasting Nazis as you go. From there, the game gets zanier and more ambitious. I rode a giant mechanical fire-breathing dog of death chasing armored troops down the streets of New Orleans. I infiltrated an airship with the power to level a city. The New Colossus is constantly upping the ante and making the most of the locations you visit, like Reich-occupied Roswell, where the Ku Klux Klan walk arm-in-arm with Nazis and talk about the importance of Americans taking their German lessons. These sequences create a compelling world, going to great lengths to sell the horrifying nature of the Nazi regime's iron-like grip on America. From detailed and beautiful propaganda adoring walls to background sequences with characters talking amongst themselves about their struggles and secrets, Wolfenstein II goes all-in on making its terrifying world a breathing place filled with atrocities and towering, architectural wonders.

An exhilarating adventure brought to life by the industry-leading id Tech® 6, Wolfenstein® II sends players to Nazi-controlled America on a mission to recruit the boldest resistance leaders left. Fight the Nazis in iconic locations such as small-town Roswell, New Mexico, the bayous and boulevards of New Orleans, and a post-nuclear Manhattan. Equip an arsenal of badass guns, and unleash new abilities to blast your way through legions of advanced Nazi soldiers and über soldiers in this definitive first-person shooter.

America, 1961. Your assassination of Nazi General Deathshead was a short-lived victory. Despite the setback, the Nazis maintain their stranglehold on the world. You are BJ Blazkowicz, aka “Terror-Billy,” member of the Resistance, scourge of the Nazi empire, and humanity's last hope for liberty. Only you have the guts, guns, and gumption to return stateside, kill every Nazi in sight, and spark the second American Revolution.

THE MISSION:b> Head into battle armed with the most effective tips and strategies for navigating every mission.

THE GEAR:b> Use the right tool for the job! From hatchets to helmets to heavy weapons, we provide full equipment stats and upgrade details so you can go in prepared.

Having trouble with the reunion mission? - Take a sneak peek inside the guide to learn how!

Is there online multiplayer?(Not including co-op)

Asked by: gabemg9
No, this is a single player only experience. Well worth it too if you liked the first one.
Answered by: Seetj 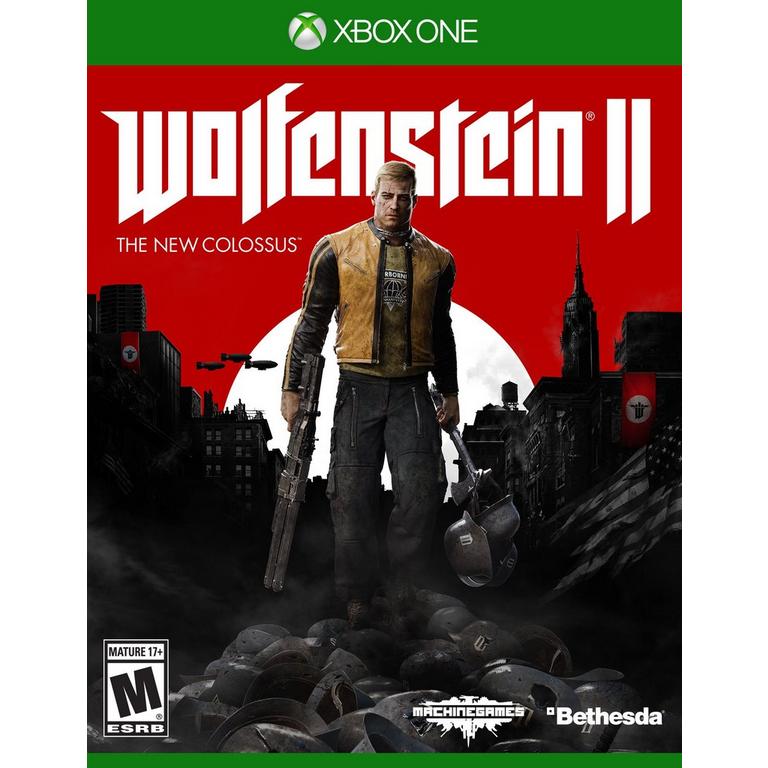