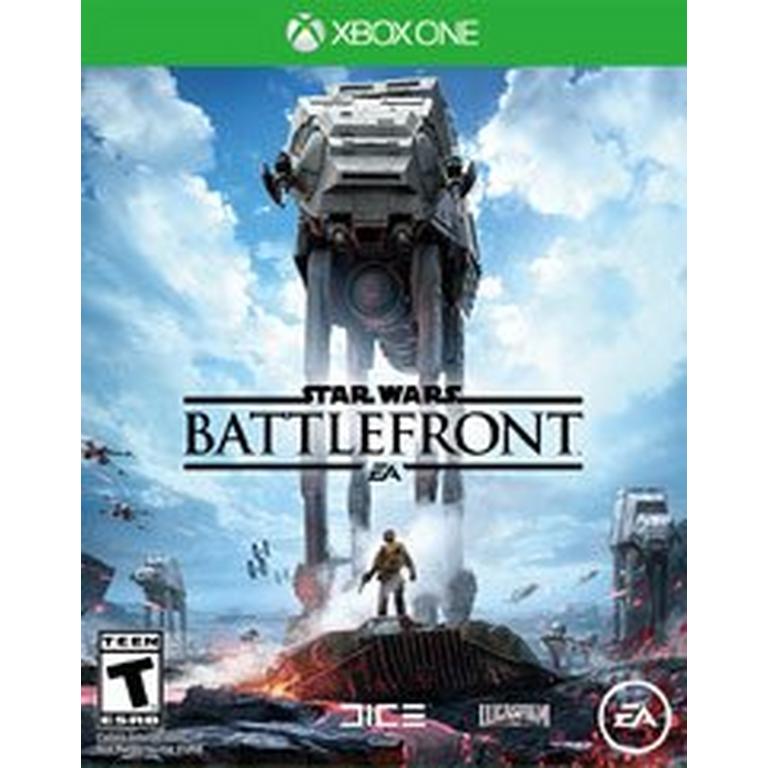 Feeling the ominous thud of an AT-AT stomping down on the frozen tundra of Hoth. Rebel forces firing blasters as Imperial speeder bikes zip through the lush forests of Endor. Intense dogfights between squadrons of X-wings and TIE fighters filling the skies. Immerse yourself in the epic Star Wars battles you've always dreamed of and create new heroic moments of your own in Star Wars™ Battlefront™.

THE MOST IMMERSIVE GAME

Photorealistic visuals and authentic sound design from the talented team at DICE.

Prepare to be transported to a galaxy far, far away.

GROUND-BASED COMBAT ON A GALACTIC SCALE

Fight for the fate of the galaxy.

Fight as the galaxy's most memorable heroes and villains, like Darth Vader and Boba Fett.

Interact with some of the most beloved characters from the original trilogy.

Become the hero or villain of the battle.

Find out which squadrons will rule the skies.

FOR JEDI AND PADAWANS ALIKE

Partner up with a friend in online multiplayer, share unlocks and have each other's backs on the battlefront.

Fight for the Empire or the Rebellion offline, solo or with a friend, in carefully crafted missions.

Play as some of the memorable heroes and villains from the original Star Wars™ trilogy, and encounter many more in Star Wars™ Battlefront™.

The Force is strong with this one. Live out your Jedi fantasies and deliver Force Pushes and Saber Rushes in the battles of Star Wars Battlefront. As Luke, move faster on the battlefield and use his lightsaber to deflect enemy blaster fire back at Imperial foes.

Ready to feel the power of the Dark Side? Strike fear into the hearts of any Rebel as the evil Sith Lord, Darth Vader. What he may lack in speed, he makes up with power and his unique abilities such as Force Choke and Saber Throw.

Go behind the mask of the mysterious and deadly bounty hunter Boba Fett. Use the jet pack to bring death from above, or take out Rebel scum with the powerful rocket barrage or flamethrower.

Packed with action and depth, Star Wars™ Battlefront™ Missions are a great way to jump into action offline, via couch co-op or online co-op.

Hold off waves of Imperial forces including AT-STs, TIE Fighters, elite stormtroopers and more. Experience a different Survival mission on every planet.

In addition to Survival, Star Wars Battlefront will feature a variety of exciting Mission modes including Battles, Hero Battles and Trials. Stay tuned for more info coming in the months ahead.

From large-scale 40-player battles to smaller modes for 8 players, Star Wars™ Battlefront™ has a variety of action-packed multiplayer modes.

Take to the skies and dogfight in some of the most memorable Star Wars vehicles including X-wings, TIE fighters, the Millennium Falcon and more.

Rebels and Imperials fight for control of five key points in this intense 40-player clash that takes place on some of the largest maps in Star Wars Battlefront. Take advantage of both ground and air vehicles in order to secure victory for your team.

Fight in epic 40-player battles as a Rebel to destroy the Empire's onslaught of AT-AT's by calling in Y-wing bombers. Or, side with the Empire and protect your Walkers while utilizing their mighty weaponry to crush the Rebel objective.

A classic Team Deathmatch mode with a Star Wars Battlefront twist. Fast-paced and packed with chaotic fun, Blast pits 10 Rebels against 10 Imperials in a fight to the finish.

Keep an eye on the sky! Escape pods are crashing down onto the planetary surfaces and your team must fight for control over them. Drop Zone provides frantic 8v8 matches that will put your combat and strategic skills to the test.

Six Rebels and six Imperials fight to capture and hold on to three GNK Power Droids. These are the Droids you're looking for. GONK!

In addition to Walker Assault, Blast, Fighter Squadron, Drop Zone and Supremacy, Star Wars Battlefront will feature immersive, fun-filled multiplayer modes including Cargo and more to be announced in the months ahead. Stay tuned for more information on these exciting multiplayer modes.

Star Wars Battlefront is rated 3.9 out of 5 by 415.
Rated 3 out of 5 by Potion Mixin from Fun to be the heroes Decent game if only for nostalgia and fandom. Great graphics but repetitive gameplay. Even falls short in multiplayer
Rated 5 out of 5 by Karina Blayer from Working just fine I loaded up the game and everything is working just fine no bugs or glitches in the game
Rated 4 out of 5 by Lajojogogo from GS cancelled my online order w no explanatIon giv I ordered this online and mg order was cancelled with no explanation given. I had to find a GameStop that sold it. My son enjoys the game.
Rated 5 out of 5 by Adollis91 from Awesome game Big fan of star wars games this game is great to add to your game collection
Rated 4 out of 5 by Callen from Good deal Bought for a friend. He loves gaming and Star Wars. I thought it was a win-win. Great price, great store.
Rated 2 out of 5 by Zaccari from Disappointed Boring game, it was cool for an hour but then i didn't want to play it anymore, graphics look amazing but the gameplay is dull and uninspired.
Rated 3 out of 5 by VALUX from Probably skip it. The description of the game was SEVERELY lacking. There is no campaign to play. A few training missions, a few battle missions and that's it. Only otherwise playable online and you will never get a full team. Now I understand why it was so cheap. It's cool in that its star wars, but that's about it.
Rated 5 out of 5 by Hunter Watters from Star wars Awesome gameplay with a wide variety of missions including the endor speeder chase

Is it digital or physical