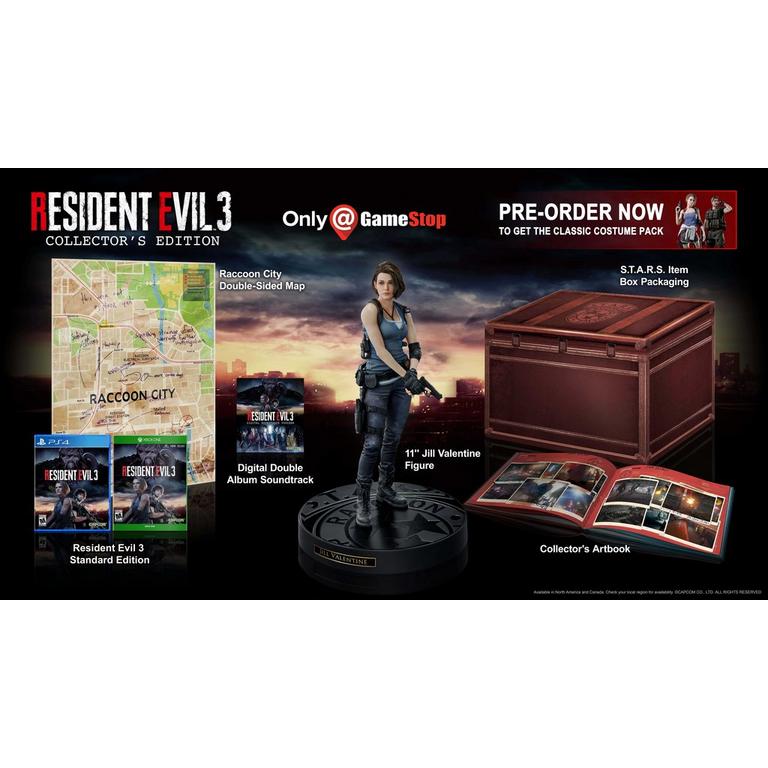 The Resident Evil 3 Collector’s Edition is the ultimate way to complete the return to Raccoon City, with an assortment of paraphernalia packaged within an alternate S.T.A.R.S. version of the iconic item box.

I’ve always been fascinated by the concept of “persistence hunting” – the idea that a hunter doesn’t need to run faster than its prey as long as they chase with dogged determination. Early human hunters would often pursue their game for hours – or even days – until they’d brought down some behemoths. After an extended chase, even the healthiest creatures must collapse, beaten and exhausted from the endless pursuit. It sounds like an incredibly terrifying way to meet your end, and if you ever wanted to know how that prey feels, play Resident Evil 3.

Return to the Raccoon City zombie outbreak in this third-person shooter than reworks everything, including enemies, puzzles, and environments

Resident Evil 3 looks clean and crisp, and the monster designs are appropriately grotesque

The soundtrack is intense, which matches the emphasis on action. Ambient effects and zombie moans set you on edge even when the bullets aren’t flying

This is another spectacular remake for the series, and Nemesis is an imposing enemy who relentlessly chases you throughout the game.

Resident Evil 3 Remake Collectors Edition Only at GameStop is rated 3.3 out of 5 by 32.
Rated 5 out of 5 by BVC_Duke from Staaarrrrs!!!! Such a great remake! Awesome titles, great remake!
Rated 5 out of 5 by T0PHSTR from Expectations EXCEEDED after RE2 REmake! RE2 (the original) is my favorite game of all time. I really enjoyed RE3 as well, but RE2 always stuck out for me. With that being said, I was ecstatic when they announced the REmake of RE2. I preordered that Collector's Edition and was very pleased with the collectibles and especially the game. I feel like the bar was set high for RE3 REmake, and popped it into my Xbox with pretty high expectations, and a little bit of hesitation that it wouldn't hold a candle to RE2 REmake. However, I was totally blown away by the RE3 REmake experience! From the opening of the game setting up the atmosphere of Raccoon City at the peak of the T-Virus outbreak, the game doesn't quit pacing you through the story. There is very seldom a lull in this action based sequel to the 2019 REmake. As may people have pointed out, the game is shorter than the last few RE games. I'd say that's true as there aren't two campaigns (i.e. Claire and Leon or Jill and Chris in other games), nor are there "A" and "B" scenarios. However, what this game lacks in quantity, it more than makes up for in quality. It's hard for me to admit, but I really think at times I enjoyed RE3 REmake more than RE2 REmake... The game is the perfect balance of horror, suspense, action, and a great story. There are also several instances where this game ties into RE2 in ways that are really cool, if you played RE2 REmake. Overall, if you're a fan of the games, I'd say it's worth the buy. My expectations were surpassed buying this game in full, and I'm sure if you're a huge fan of the series, yours will be too. Especially if you've played RE2 REmake.
Rated 2 out of 5 by Broly113 from Deliver or pick up I pre-ordered my collector's edition back in December, but due to the coronavirus outbreak, my local gamestop in NJ closed. An email was sent, but gave no specific instructions about collector's edition pre-orders, whether i should have it delivered or pick it up at my local store where i purchased the CE. Does anyone know how i can get my CE.
Rated 1 out of 5 by Ash112 from POOR INFORMATION Regarding collector editions Gamestop you are the worst and have no clue how to release a collector editions...... You are losing many customers due to your poor decisions how to release a collector edition. You have no clue and do not listen to your customers advice!
Rated 4 out of 5 by Kingvic2236 from Delivering game I recently pre-order the resident evil 3 collector's edition due to the coronavirus and GameStop being closed when I get my resident evil 3 collectors edition delivered to me or will I have to go to the store and pick it up.
Rated 1 out of 5 by Jon Juan from Poor Handling of CE! Did not have an active time, so no one knew when it went up. You just had to be there at the right time. Not to mention people are scalping this edition already. GameStop you are terrible!

Can you buy standard edition then upgrade to collectors edition when it&rsquo;s available&nbsp;

Asked by: Samuel rose park
No...
Answered by: CaptainAsia 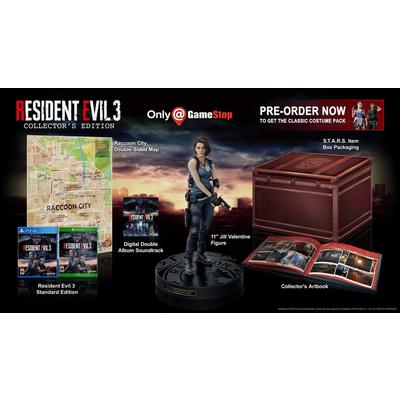