Blood
Use of Tobacco
Violence
Overwatch Game of the Year Edition is rated 4.5 out of 5 by 97.

Blood
Use of Tobacco
Violence
Overwatch Game of the Year Edition is rated 4.5 out of 5 by 97.
The world needs heroes-- take your place in the world of Overwatch. Choose your hero from a Read More
$31.97
BUY NOW, PAY LATER
with 4 payments of $ Learn More

Tradeable
Buy Now
The world needs heroes-- take your place in the world of Overwatch. Choose your hero from a diverse cast of soldiers, scientists, adventurers, and oddities. Bend time, defy physics, and unleash an array of extraordinary powers and weapons. Engage your enemies in iconic locations from around the globe in the ultimate team-based shooter.

You get Overwatch®, plus:

Soldiers. Scientists. Adventurers. Oddities. In a time of global crisis, an international task force of heroes banded together to restore peace to a war-torn world: OVERWATCH.

It ended the crisis and helped to maintain peace in the decades that followed, inspiring an era of exploration, innovation, and discovery. But after many years, Overwatch's influence waned, and it was eventually disbanded. Overwatch is gone… but the world still needs heroes.

Overwatch features a wide array of unique heroes, ranging from a time-jumping adventurer, to an armored, rocket-hammer-wielding warrior, to a transcendent robot monk. Every hero plays differently, and mastering their abilities is the key to unlocking their potential. No two heroes are the same.

Whether you're engaging in combat on the front line, providing defensive cover with your energy shield, or supporting your allies by amplifying their damage, every hero's abilities are designed to be effective as part of a team. Learning to utilize your abilities in concert with your teammates' is the key to victory.

Teams of heroes do battle across the planet. From protecting the secrets of the mysterious Temple of Anubis, to safely escorting an EMP device through King's Row, the world is your battlefield.

Does this game contain vulgar language

Asked by: Mmgdk
Thank you for your question! No, this game does not contain vulgar language. It has a Teen rating based on blood, use of tobacco and violence.
Answered by: GameStopTeam23

Asked by: Fluzao2020
Nah. Along with overwatch pretty much any game made late 2015 and forward for the Xbox one can only be played on the Xbox one.&nbsp;
Answered by: Xbox is Better than Ps4

Will it work in xbox one S

Asked by: Antdabeast
Yes, any Xbox One game will work on the Xbox One S.
Answered by: EF Godlike

To play Overwatch, do you have to have a subscription to Xbox Live? I am just wanting my son to play against computer.

Hi how long will the price offer of Overwatch $29.99 last ? Will the deadline be after Christmas ? I&rsquo;m planning on buying it once I collect my Christmas presents money ;)

Asked by: NightShroud
Thank you for your question NightShroud. This offer is valid through Christmas Eve, 12/24/17.
Answered by: GameStopTeam10

How long will overwatch still be at 29.99

Does game of the year addition come with origins or legendary? Everywhere else I look it says origins but here it says bonus legendary content...while supplies last. I want legendary and don't want to buy this if it only comes with origins

Asked by: gamerboymom
Overwatch Game of the Year Edition is rated 4.5 out of 5 by 97.
Rated 5 out of 5 by Locodreamz from Still enjoyable Fun game and enjoy the free updates with maps and characters
Rated 5 out of 5 by Xbox is Better than Ps4 from Great game! Awesome game. Overwatch never fails! I think I requested for legendary edition on the website but it turned out fine
Rated 5 out of 5 by JaxSaber from A truly amazing game A couple weeks ago I finally bought this game after being convinced by a friend and watching a lot of the animated shorts. I at first felt like I wouldn’t do well at all, but after a couple games I felt right at home. This game can put a smile on your face with the amazing characters and fun gameplay. There at two things that may take that experience away, lag spike issues and being a bit to competitive. Try to avoid being over competitive. This game heavily relies on teamwork. Although you don’t have to be in a party with team mates, it’s probably recommended. This game provides some of the most fun and friendly but tough competition on the market.
Rated 5 out of 5 by Aleycat from Great Display I love this game!It's really fun to play alone or with friends.Highly recommend :)
Rated 3 out of 5 by chronoVesper from Do you like terribly balanced characters? Well then this game is for you! Though it's fun to play, it can be quite aggravating for several reasons. One of which, as stated in the title, is Blizzard's inability to properly balance anything in any of their games. They buff characters who don't need it, nerf those who don't (usually/entirely) need it, and leave the characters who do need either of the two alone for long periods of time. Beyond that, the player base can be extremely aggravating to play with. You might get lucky and get lots of good teams, but for the most part this game is being played by people who's only idea of "strategy" is "rush to the point and try to kill some people," which almost always ends in their timely demise. (Also, if you're a Support main, I feel for you and I fear for you. Be prepared for the onslaught on "I need healing!" by people who are half the map away fighting one person while there are three currently owning your face.) Now some good points. The game looks wonderful. The maps are well crafted; the character skins look swell, and the effects aren't (for the most part) overwhelming. The characters and abilities are fun to play with and there's a wide range for you to choose from to fit your own play style. Overall, here's my score: Gameplay: 4/5 Characters: 4/5 Balancing: 2/5 Players: 2/5 Annoyance levels of Support mains: 10/5
Rated 3 out of 5 by Sal8 from Good for kids but EXPENSIVE for parents My son seems to like they game however the price was a bit much.
Rated 4 out of 5 by Shawn11189 from Almost perfect Gameplay isn't quite as fast pasted as some other online shooters which is actually good. Each character truly feels unique. If i had one complaint it's a lack of game modes like a horde type mode and no single player modes outside of custom ai battles.
Rated 5 out of 5 by DaGold Package from Perfect Art Style. So Happy I purchased this game. Love it so much.... Everlasting fun!

Overwatch Game of the Year Edition 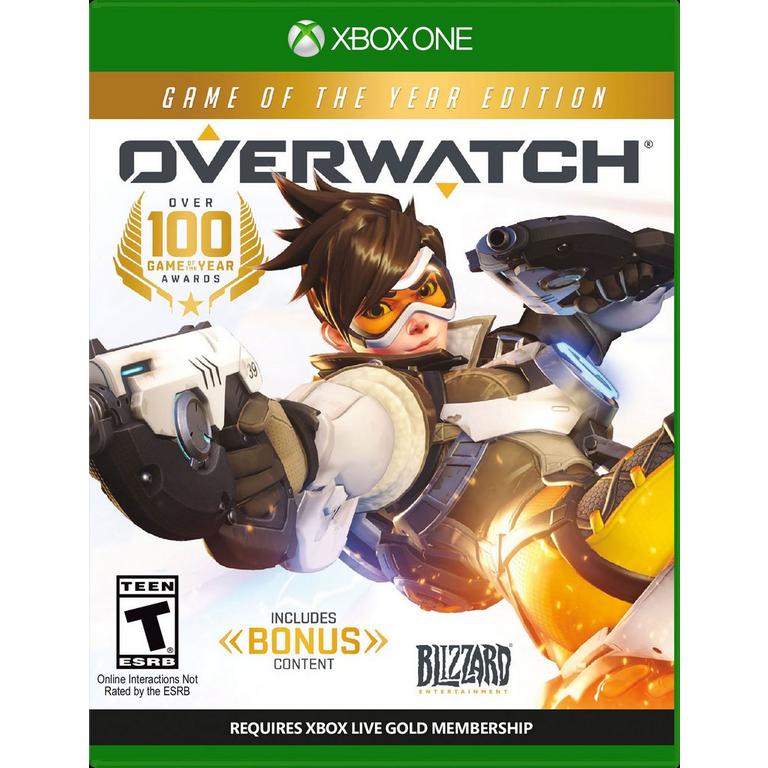 Overwatch Game of the Year Edition