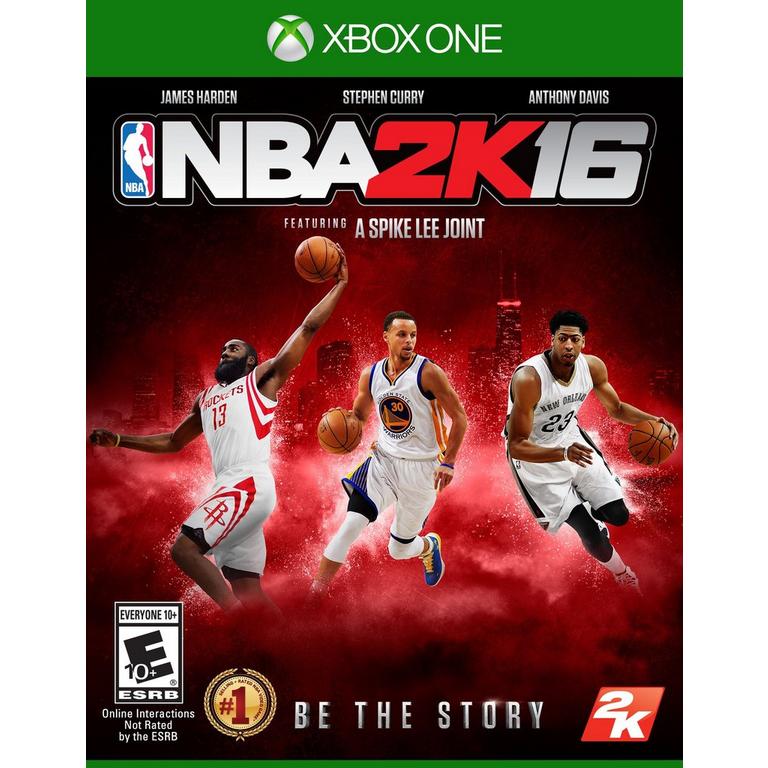 Alcohol Reference
Mild Language
Mild Suggestive Themes
Violent References
2K
NBA 2K16 is rated 4.0 out of 5 by 104.
$1.99
Buy 2 Pre-Owned Games, get 1 free! Cannot be combined with any other offer. Add items to cart for discount.
Pre-Owned
$1.99

The NBA 2K franchise is back with the most true-to-life NBA experience to date with NBA 2K16. Guide your MyPLAYER through the complete NBA journey, take control of an entire NBA franchise, or hone your skills online competing against gamers from around the world. With animations that provide smoother movement and more realistic articulation, it's certain to be the most authentic NBA gaming experience yet.

From the realistic player models to the first-class broadcast presentation, this is the best-looking sports game ever made

The acting in MyCareer is dramatically improved, and newcomer Greg Anthony slides between commentators Kevin Harlan and Clark Kellogg without a hitch

With several modes worth playing, NBA 2K16 offers the most value you'll find in a sports game

Letting a championship slip out of your grasp can be a harrowing experience for a franchise. Some teams never get over the hump, fading back into the pack never to emerge as a contender again. Others use the disappointment as motivation to improve and prepare for a second run. Visual Concepts found itself in this position after server woes sullied the launch of the otherwise impressive NBA 2K15. Using the offseason to retool, the series has emerged with its best effort in years.

NBA 2K16 is the virtual equivalent of a player who can play all five positions on the court. The already strong gameplay receives a boost this year from a redesigned post game that lets you back down players with a press of the left trigger, a welcome return to days of old. Passing also received an overhaul, giving you three face buttons for lobs, bounce passes, and the traditional toss. Double tapping these buttons gives you quick access to alley-oops and flashy passes as well. Having these options at your fingertips is great for specific situations, but expect to still use the icon-based passing because directional passing can occasionally misread your intent and send a ball across the court instead of into the post.

You will need all the tools at your disposal to keep up with the impressive A.I. in NBA 2K16, which is the best I've seen in a sports game to date. Each team employs different strategies, making every game feel different. Teams run play sets to get their best players involved, attack quickly in transition, and react to your tactics on the fly. This dynamic gameplay translates across NBA 2K16's strong collection of game modes.

For the last few years the destination mode for NBA 2K games has been MyCareer, which puts you in the shoes of an up-and-coming baller breaking into the NBA. This year 2K handed the storytelling duties to famed director Spike Lee, who takes the experience in a decidedly cinematic direction. Users still create their own player, but Lee is the true owner of this story. Player agency means little to Lee – no matter what race or creed you create for your MyPlayer, you play the role of “Frequency Vibrations,” a high school hoops sensation born and raised in Harlem. I embraced this narrative direction since this is the story Lee wanted to tell, but the dissonance of seeing my pasty white player interacting with his black twin sister ultimately made me go recreate a different character so the cutscenes wouldn't be so jarring.

Read the rest of the Review at Game Informer

Three of NBA's top super stars will be available on the cover of NBA 2K16: Golden State Warriors' Stephen Curry, Houston Rockets' James Harden, and New Orleans Pelicans' Anthony Davis. While game covers will be distributed at random, each game box includes a foldable insert with all 3 individual cover athletes, ensuring the ability to insert the cover of your choice into the front of box.

NBA 2K16 is rated 4.0 out of 5 by 104.
Rated 4 out of 5 by Itta pupu from Good It really puts you in the game like never before.
Rated 5 out of 5 by RonGotSole from Best 2k game ever Absolutely my favorite 2k game of all time. The gameplay is smooth and all around fun.
Rated 1 out of 5 by Crys19 from Don't care for the game I have a hard time understanding how to shoot and or to steal the ball.
Rated 4 out of 5 by MightierToaster from It's 2019 and NBA 2k16 Still Holds Up Plays as well as the newer versions for a price of pennies on the dollar. Having been a 2K player since 2k2 on the Dreamcast and PS2, I occasionally pick up an NBA 2K game when the itch needs to be scratched. 2k16 is a wonderful basketball game with all the modes you'd like. However, the online servers are now down and thus there is no competitive play or MYPARK modes. If you want just a MyCareer mode or Dynasty mode, this will be perfect for you.
Rated 4 out of 5 by Caen from Pretty Good It was a pretty great game, and the story mode definitely keeps you involved at all times.
Rated 5 out of 5 by Spoiledrottonlillady from NBA 2K 16 My son loves this game he hasn’t stopped playing it since I got it for him
Rated 5 out of 5 by LadyTee83 from All NBA games are good lol My sons are just starting the game but have not stopped playing
Rated 5 out of 5 by Robot Minecraft from Great game. Amazing graphics, great gameplay, incredible soundtrack, extremely replayable. Best nba 2k on Xbox one. 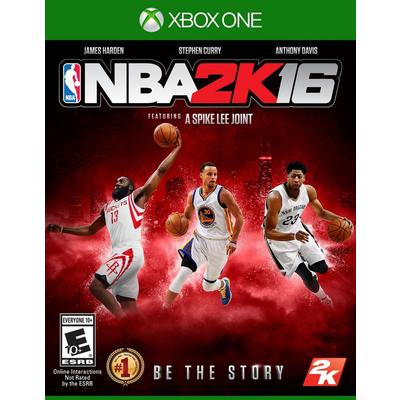 NBA 2K16
Xbox One
Buy 2 Pre-Owned Games, get 1 free! Cannot be combined with any other offer. Add items to cart for discount.