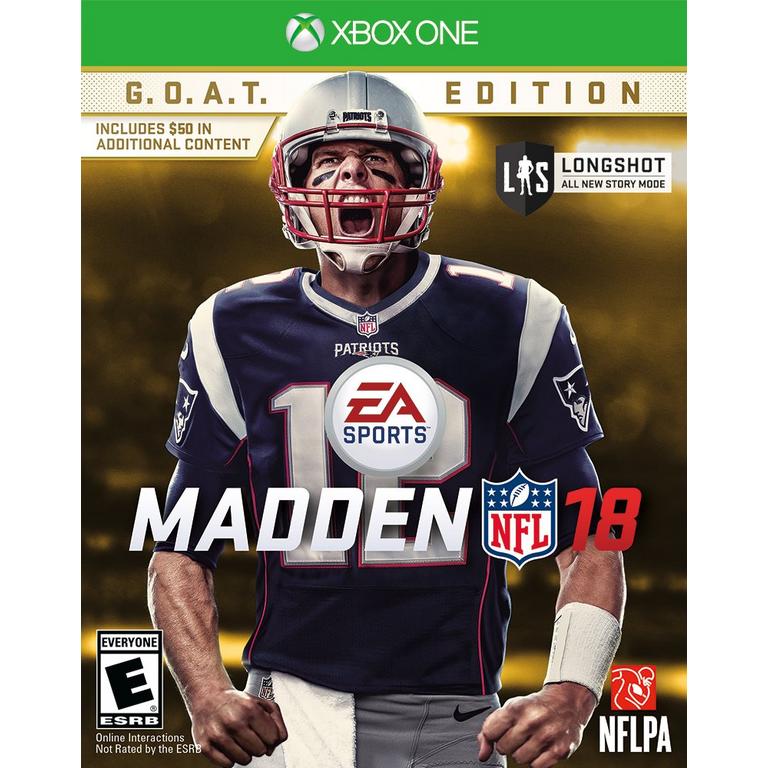 This is Madden like you've never seen it. Powered by the Frostbite engine, Madden NFL 18 introduces Longshot, a football redemption story you can play. Your decisions lead forgotten prospect, Devin Wade on the pursuit to fulfil his NFL dream in the first ever Madden story mode. Team up and dominate the gridiron with your friends in MUT Squads and play each matchup to your liking new Play Styles: Arcade, Simulation, and Competitive. Play the best real-world NFL matchups each week in Play Now Live! New stadium exteriors surrounded by vast cityscapes bring the spectacle of NFL gameday to life in the most photorealistic game to date.
More Details Less Details

Purchase today and receive up to $50 in additional value. Start building your dynasty on day one with one of five Elite G.O.A.T. players, an Elite player from your favorite NFL team, 12 Squad Packs, 2500 contracts and one uniform pack in Madden NFL 18 Ultimate Team, the complete NFL team-building mode where you build, play and win with your ultimate team of today's NFL superstars and legends.

POWERED BY FROSTBITE Madden Like You've Never Seen It.

LONGSHOT Live the story of an NFL prospect on and off the field.

For the first time in franchise history, Madden NFL 18 introduces Longshot, a football redemption story you can play. After three years away from the game, lead forgotten prospect and former five-star high school quarterback, Devin Wade as he tries to overcome the loss of his father and take one last shot at his dream of becoming an NFL player. Bolstered by his best friend Colt Cruise and NFL Legends, your decisions will determine if Devin hears his name on Draft Day.

MUT SQUADS Team up with friends and conquer the gridiron.

Lead two friends to victory in this all-new online team play experience by selecting roles on the field and merging each players' Ultimate Team line ups of current NFL stars and legends to play cooperatively vs. other players.

Take the field with your favorite team or play the best weekly matchup using live updates containing the latest rosters, custom commentary and up-to-date stats from NFL.com then continue your season all the way to the Super Bowl from Play Now.

MUT Build, play, and win with your ultimate team of todays' NFL stars and legends.Madden Ultimate Team (MUT) is the complete NFL team-building mode using your favorite NFL players from the past and present. Play games, collect rewards, and upgrade your team with daily, fun and engaging content updates including legendary NFL players exclusively found in MUT. Continuously craft your squad to elite status on the road to building your Ultimate Team dynasty.

Play weekly full-game matchups or get through a season quickly by playing as just the offense, defense, or key moments from the game. Grab the reins and control your teams' operations from signing free agents and making trades, to scouting and drafting players, your decisions build your dynasty. Join up with other players and battle through the season in a fully connected league experience. Manage your Franchise from your smart phone using the Madden Companion App.

Madden NFL 18 GOAT Edition is rated 4.2 out of 5 by 20.
Rated 1 out of 5 by Mike 187 from Games is garbage don’t waste money If want you just want to play long shot or franchise this game is for you but if you want to play online don’t waste your money always lags and garbage happens every game it doesn’t make sense not realistic in anyway shape or form pretty terrible
Rated 3 out of 5 by Vinnie2k18 from Great game play It has excellent game play but the story mode was very disappointing. It was too much to throw a pass in story mode. I really wish they would have kept it simple with story mode instead of making it extra complicated.
Rated 5 out of 5 by MrBeAsT from This game is very This game is very good and it has amazing graphics but the thing that liked more about this is the story mode
Rated 5 out of 5 by Bconner80 from Great Graphics I GOT THIS GAME A WHILE BACK AND 11OUT OF 10 it is awesome
Rated 5 out of 5 by Stickstickly from Wow... Just wow! I just went to Gamestop to purchase Madden 18. Here's what I think: 1) Out of this World Graphics! The videos and screenshots do not do it justice! 2) The fluidity, precision, and response is so crisp. 3) MUT is still fantastic and great fun. When GOAT edition is purchased you get off to a sprinters start! (Highly recommend the extra bucks). 4) Just buy it. You'll see, it's well worth your hard earned $$$ Great fun, amazing graphics, UPDATING commentary (it downloads new commentary, seriously...). Go! Go buy it! :) ***Side note*** The rap / hip hop in the menus is extremely annoying and required that I mute it! EA, throw some rock and country in there!!!
Rated 5 out of 5 by Apollo5 from Great Game I really enjoy playing madden every year a new one comes out. Nice game flow and graphics.
Rated 1 out of 5 by fcfightermma from Horrible Don't waste your $ just update your rosters manually on 17 and create rookies, this game is horrible, I mean come on you can't even hear tackles no gameplay sound effects yet again...seriously Frostbite engine huh?? NFL 2K5 was more realistic than any of these Madden games nowadays
Rated 2 out of 5 by cory184858384858 from Can't pick up at store on xbox one I can't pick up the goat edition on xbox one and it's annoying on ps4 you can but xbox you can't and idk why? Doubt there not sold out!

Does Madden 18 come on a disc?

Does the Goat edition have legendary teams as well as current

What is the trade in value for this game