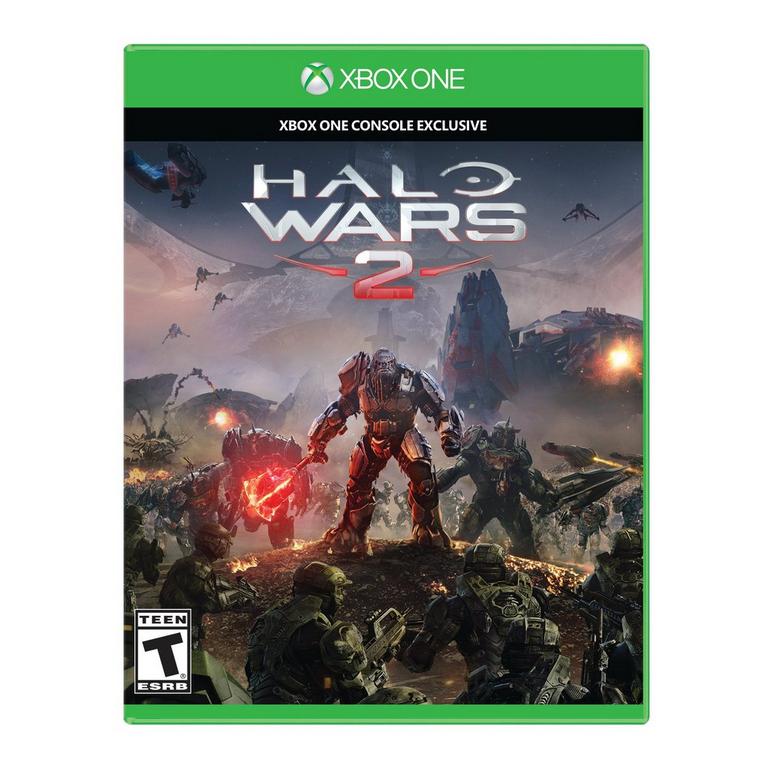 An all-new enemy threatens the Halo universe and the only thing standing between Armageddon and humanity is the brave crew on board the Spirit of Fire. Real-time strategy makes an explosive return to the Halo universe in Halo Wars 2. Lead armies of Spartans and other Halo fighting forces like Warthogs, Scorpions and exciting new units in a brutal war against a terrifying new enemy on the biggest Halo battlefield ever.
More Details Less Details

All-new, Action-packed Story – The heroes of Halo Wars return to find themselves - and the galaxy - in more danger than ever. Following the events of Halo 5, the all-new story is told in action-packed missions set on the legendary Halo destination known as the Ark. Players will strategically command overwhelming firepower in large-scale battles against a terrifying threat facing the UNSC and all of humanity.

Build Your Halo Army – Construct your bases, prepare your vehicles and amass your troops. Lead them into huge battles that span across alien environments in a vast collection of campaign and multiplayer maps.

Multiplayer Warfare – Play with or against your friends and the Xbox Live community in up to 3v3 matches. All-new units with explosive firepower, Leaders with special abilities that help to turn the tide in battle and thrilling multiplayer modes are at your fingertips as you wage war on a variety of maps.

Blitz: Instant Command – Blitz is an entirely new way to experience Halo Wars and real-time strategy gameplay. Combining tactical combat with card-based strategy, your deck is your army in Blitz as you build collections of powerful Halo vehicles and troops and command those units in fast-action matches online or solo against waves of enemies.

Multiplayer Coverage: Get expert tips and strategies for every multiplayer mode, customized for the RTS experience - including the all-new Blitz mode

All Available Units: Master all forces, weapons, and vehicles - new and familiar - and send them against your foe!

Want to know more about Blitz Mode? - Take a sneak peek inside the guide to learn how!

Halo Wars 2 delivers real-time strategy at the speed of Halo combat. Get ready to lead armies against a terrifying new foe on the biggest Halo battlefield ever

Join the best community of gamers on the most advanced multiplayer network. Experience the best in competitive and cooperative gaming across Xbox One and Windows 10.

Get free games every month with your Xbox Live Gold membership, worth up to $700 a year.

Save up to 50-75% in the Xbox Store. With millions of gamers worldwide, and so many games to play, now's a great time to go Gold.

Halo Wars 2 is rated 4.1 out of 5 by 134.
Rated 1 out of 5 by TG08 from Halo wars 2 Waste of money, should have done better review search on this.
Rated 5 out of 5 by TonyG818 from Gotta Try it out Just like the old days of Command and Conquer with that great Halo twist to it. Easy to command and follow through on operations.
Rated 5 out of 5 by DJ WESLEY from Halo 1 and two Great game, Always love Halo went it first came out, keep up the good work and continue to make it better.
Rated 3 out of 5 by Skippi Skip from he. Game The first game was better. Boss fights are dumb. Overall...eh.
Rated 5 out of 5 by wolfpaw1988 from great game. a wonderful tatical game and good story, would recommend to buy.
Rated 1 out of 5 by Tommy Dee from Lamest of the Halo titles Not a fan of the format would prefer a first or third person shooter. Returned the next day after purchase.
Rated 2 out of 5 by Gurrman from Meh The game is about as good as smashing your head into your computer. There is no point in getting the game for xbox, as for it's really built for pc. The controls are wanky and the only redeeming quality is the things the marines say.
Rated 1 out of 5 by GiGi52064 from halo wars 2 Not like the other Halo's don't care for it at all.

Can Halo wars 2 be placed with no internet