Welcome to Australia! In Forza Horizon 3, you'll explore the Land Down Under, along with more than 350 of the world's greatest cars and trucks.

You're in charge of the Horizon Festival. Customize everything, hire and fire your friends, and explore Australia in over 350 of the world's greatest cars. Make your Horizon the ultimate celebration of cars, music, and freedom of the open road. How you get there is up to you.

With the new Horizon Blueprint, create and instantly share your own custom race events, championships, and Bucket List challenges.

Select your driver character, customize your car, your license plate, even your own car horn sound. Drive to the music you love with eight diverse radio stations, or stream your own music collection.

HIRE AND FIRE YOUR FRIENDS

Hire friends to star in your festival and win you more fans. If they're not winning you fans, fire them!

EXPLORE AUSTRALIA IN OVER 350 CARS

Explore the Horizon Festival's largest, most beautiful and diverse open world ever. Choose from an incredible selection of over 350 of the world's greatest cars, all in unrivalled ForzaVista detail.

Features may vary between Xbox One and Windows 10 versions of game. Xbox One game disc for use only with Xbox One systems. Xbox Live Gold membership (sold separately) required for online multiplayer on Xbox One. Cross-device play only in Xbox Live-supported countries, see xbox.com/live/countries. Some music features may not be available in some countries. See forzamotorsport.net.

Forza Horizon 3 is rated 4.5 out of 5 by 519.
Rated 5 out of 5 by Deisellife12 from Awesome Great game stunning graphics and sounds an I love the story
Rated 4 out of 5 by Ronnie from Player player. Enjoying the visualization. Still trying to learn how to play it. i think I'll love it once I'm more versed in it.
Rated 1 out of 5 by egghead55 from could have been a great forza shoulda been called anna horizon 1, it seems like they implemented nag ware just to annoy the gamers and ruin the experience, like every five minutes anna keeps coming up saying you have a bucket list to complete nearby, and the drivatars in free roam kept crashing into me when i just wanted to enjoy the cars in the game in peace, it made me want to take the game out and break it, at least horizon 4 has the option to turn off the earsore, but no option to turn off the drivatars, and you cant the sell cars you don't want offline for quick cash, horizon 3 had potential but was ruined.
Rated 5 out of 5 by tanfler from great game i bought the game it was amazing the graphics and every thing if you like open road games bye this one
Rated 3 out of 5 by ScooterYeet from Kinda repetitive Very fun game and can be extremely immersive but can get very repetitive or boring during the campaign
Rated 5 out of 5 by John Rowen from Forza horizon 3 Probably one of my favorites in the Forza horizon series . Not only can you do race events in the game . You can also do stunts and other stuff in the game .
Rated 5 out of 5 by Stormedtrooper from A great title that blossoms with the expansions A great game that really shines once you venture into the expansions. The Hot Wheels expansion in particular spoke to my younger self and was a childhood fantasy come to life.
Rated 3 out of 5 by Grizzlies00 from Main Things Driving is smooth and has realistic sound effects. Sometimes the camera from the drivers seat doesn’t give you a clear view of your mirrors which is frustrating as you don’t have easy-to-use directional looking. I did enjoy being able to modify the cars and even races. Lastly, I thought the other events like Hot Wheels should have been included gameplay with the game.

Can the Xbox one game, Forza Horizon 3, be compatible with the Xbox 360?

Is this a demo or is it the actual game

Asked by: EvanC
This is the actual game and you should consider buying the digital copy because it will kick you out because it&rsquo;s a old game
Answered by: Haydenhdog09

Can you play Forza Horizon 3 offline?

Hi for forza horizon 3 pre owned can i trade fifa 15 16 and 17 deluxe edition for forza?

Asked by: Johnnyalv12
No, old fifa aren&rsquo;t worth that much, even deluxe editions
Answered by: TacoCat354

Do you need Xbox live gold membership to be able to play?&nbsp;

Asked by: BaxterEh
No, only need gold for online, you can stil play by yourself
Answered by: TacoCat354

Why every time I play Forza Horizon 3 it kicks me out and brings me to Xbox Home?

Does this game come on ps4

Asked by: Rica
No. It is an Xbox only game
Answered by: Wrenchdave89

How many players can play at a time on this game? 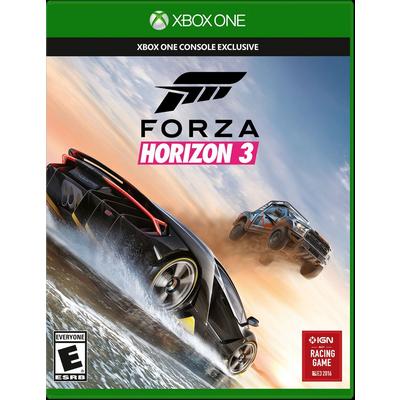