FREE SHIPPING ON ORDERS OVER $45 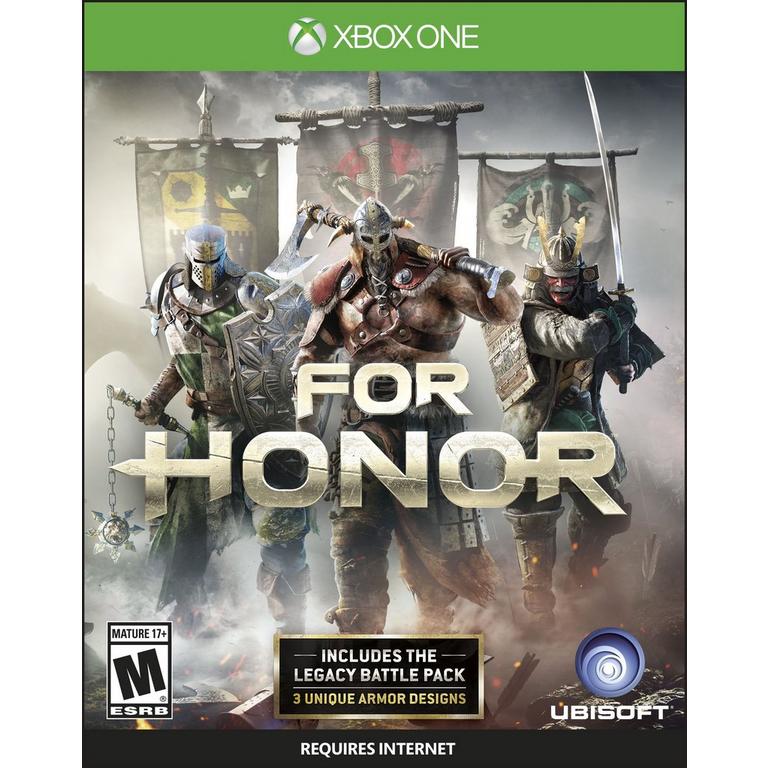 Enter the chaos of war as a bold Knight, brutal Viking, or deadly Samurai, three of the greatest warriors of legend.

Wield your blade like never before with the innovative Art of Battle combat system that puts you in total control of your warrior. Master the sword, and fight in brutal, fast-paced melee combat across an engaging story campaign and groundbreaking multiplayer modes.

Discover the world of For Honor and live the history behind the war between the Knights, Samurai, and Viking factions as you carve a path of destruction through an intense, believable battlefield.

The world of For Honor is harsh, yet filled with beautiful wildlands, grandiose landmarks, and majestic ruins. Its hardy inhabitants eke a living as they can in spite of living in a state of near perpetual war. A cataclysm struck a millenium ago, nearly destroying all civilizations. Homelands were sundered, empires burned, and whole nations exiled themselves. From the ashes of this catastrophe, the Knights, Vikings, and Samurai rose again. They struggled to rebuild their nations, trying to recapture the glory of their ancestors.

Carve a path of destruction through vivid, larger-than-life battlefields in For Honor, a ground-breaking action game developed by Ubisoft Montreal in collaboration with other Ubisoft studios.

The Art of Battle, For Honor's innovative control system, puts you in total control of your Heroes. Each has distinct skills and uses unique melee weapons. Combat is designed to deliver the feeling of true dueling without sacrificing accessibility and simplicity. It has been created through motion capture by real martial artists and professional stuntmen to bring the action to life like never before.

THE KNIGHTS OF ASHFELD ARE BRASH PARAGONS OF MIGHT.

They were sent by the Iron Legions to pacify the land. They've since acquired a taste for freedom and have made Ashfeld their home. They believe that many – if not all – of the ancient ruins that cover their lands were built by the Great Empire, the precursor of the Iron Legion.

Disorganized for centuries, Ashfeld's Knights have mostly been a collection of petty warlords and roving bands of mercenary knights. In the last decade, they have been corralled under a single banner, often at sword point, by Ashfeld's Blackstone Legion, led by Apollyon.

So far, the Knights have managed to defend Ashfeld from Vikings and Samurai attacks. Apollyon argues that a threat of war is imminent and tells stragglers that joining her Legion is the only guarantee they will hold onto their lands.

Conquerors are ex-prisoners and forced conscripts who have risen to the rank of elite soldier. They destabilize and overcome opponents through multiple defensive abilities and infinite attacks.

The Wardens are powerful, noble warriors dedicated to the defense of their land and their people. Wardens are jack-of-all-trade knights who roam the battlefield with their impressive longswords.

HISTORY HAS NOT BEEN KIND TO THE SAMURAI.

Originally from a land far away across the seas, they tell a tale of an Emperor and a homeland lost to sea and fire. Nearly a millennium later, the nomadic nation has ceased its wandering and built a new empire near the reclaimed homelands of the Vikings and the contested lands of the Knights.

Having spent the last decades acclimating to the marshy hills known as the Myre, they flourish but remain vastly outnumbered by their neighbors. They have to rely on greater martial skill, cunning, and devotion to their culture in order to survive – for they may be the last of their kind.

The Orochi are the Imperial assassins of the Samurai. They roam the battlefield like ghosts, terrorizing and slaughtering those unfortunate enough to cross their path. They offer a good mix of harassment and counter-attack abilities but require skill and timing to have an effective defense.

Kensei are the living incarnations of Bushid?, the samurai way of the warrior, or as close as one can get. They are slower than other units but have longer melee range.

THE VIKINGS VANISHED CENTURIES AGO, FLEEING THEIR CRUMBLING HOMELANDS FOR SHORES UNKNOWN.

Those left behind were conquered by the Knights and assimilated into their cultures.

The Vikings returned in great numbers a few centuries ago. They came from far across the sea to where they have established a new homeland. They retuned for many reasons, but mostly to reclaim their ancient homeland in the North: Valkeinheim. Hundreds of Viking clans now coexist in relative peace in the frozen tundra. To the outside observer, however, they seem to exist in a state of perpetual civil war.

Vikings are the undisputed masters of the sea and fresh water. When this raucous nation gathers together in massive armadas of dragon-headed ships, they are fearsome to behold and nigh unstoppable.

Berserkers are chaotic and brutal dual-axe-wielding Vikings. Their savage love of combat strikes fear into the hearts of most, friend and foe alike. They combine close-combat harassing abilities and have infinite chain attacks that can be initiated many different ways.

Fighting with heavy two-handed axes, Raiders are always found at the forefront of the Viking horde, hacking through enemies crazy enough to stand in their way. Raiders are the Viking's archetypal warriors.

Playable as single-player and two-player co-op. The For Honor campaign is an immersive tale of larger-than-life warriors plunged into one of the bloodiest wars between Knights, Vikings, and Samurai in recent history.

Hundreds of years after a cataclysm reshaped the world, Knights, Vikings, and Samurai have adapted and thrive once more. Each now has the power to defy the other factions, tipping a fragile equilibrium into all-out war.

Embodying the greatest warriors of each faction, players experience some of the defining moments that led to the war. Dealing with manipulation, betrayal, and catastrophic reversal, they will need wits and skills to ensure victory.

Storming castles and fortresses, turning the tide of key battles, and defeating deadly bosses in intense duels, players will incarnate as battle-hardened heroes who will shape the course of a violent history.

THE WARDEN IN THE STORY CAMPAIGN

The Warden is a courageous and talented young knight from the southern lands of the Iron Legion. Wardens are expected to be noble and brave – the living embodiments of classic chivalry – and this one has the potential to be a true hero, a rare occurrence in these violent times.

After years of fighting sterile battles in the Iron Legion's lands, the Warden wandered north seeking a purpose and a cause worth fighting for. That search might have come to an end in Ashfeld, as the Warden faces the Blackstone Legion for the first time.

THE OROCHI IN THE STORY CAMPAIGN

The Orochi was a rapidly rising assassin in the Emperor's service. An unfortunate habit of speaking out of turn put an end to a promising career and sent the assassin to languish in captivity. Fortunately, the Orochi's deep loyalty and good spirit earned allies keen on seeing their friend's honor restored – as soon as the small matter of springing the assassin out of prison has been dealt with.

THE RAIDER IN THE STORY CAMPAIGN

The Raider is fearless, idealistic, and tired of seeing Vikings spill each other's blood. Though he is as bloodthirsty as other raiders, this exceptional warrior is driven with an immense desire to bring peace back among the Vikings. Whether by force, guile, or sheer determination, the Raider intends to bring the clans under a common goal.

In this 4v4 battle you must break the opposing team's morale and then eliminate them. You do so by scoring points through killing enemies, capturing specific areas, and controlling them over time.

Once a team reaches 1000 points, the opposite teams breaks and can no longer spawn unless they kill opponents or recapture areas. A team wins by killing the last hero of a breaking team.

Battle it out against a single opponent in a three-round fight in an arena! Use your mastery of your hero's moveset to slay your opponent. You must do so without feats or radar to pinpoint your opponent's position.

Be on the lookout, and tap into your skills!

This is a 2v2, three-round battle to the death. Each hero spawns at a different point of the map. A team wins a battle when they've eliminated the last hero of the opposing team. There are no respawns.

Battle arenas are filled with traps and ledges, so exploit your environment to your advantage!

For Honor is rated 4.1 out of 5 by 213.
Rated 5 out of 5 by Green Chaser from My review Great game kinda difficult but makes you want to play it more and beat the game
Rated 4 out of 5 by Willyboo from Good Very beautiful game. Hard for newcomers but worth the effort
Rated 5 out of 5 by ShadowbladeX22 from Clash of warriors ! Love it ! Great fun game though maybe frustrating at first but once ya learn how to defend and get tactical it’s great! I play online all the time lol go samurai !
Rated 5 out of 5 by Beastman43 from Great Online Fighter!! This game is well supported and has an excellent controll system! Great multiplayer online fighting game!!
Rated 2 out of 5 by TidusTheCloud from Meh. Not really a huge fan of combo/reaction time games, anyway. Too much for me, personally.
Rated 5 out of 5 by OMEGAgc from best game ever One of the best games I've ever purchased, no regrets, great combat system, community is still large, and graphics are just wow
Rated 5 out of 5 by KN1GHTMARE1227 from Pretty good game Its a fun game. But the game is broken in some aspects. Guard and parry system is somewhat unconsistant. Ubisoft could fix some things though
Rated 5 out of 5 by Contra7789 from For everyone who likes fast paced action games Great game for fans of an old fighting style with weapons made in a historial date fast pace

Is there a story mode?

Asked by: Ndjdjdjdjdnjd
Hey there! Yes there is a Story Mode.
Answered by: UbisoftProductExpert

Is this game offline?

Asked by: FoxyBoy
Hello. This game requires an online connection.
Answered by: UbisoftProductExpert 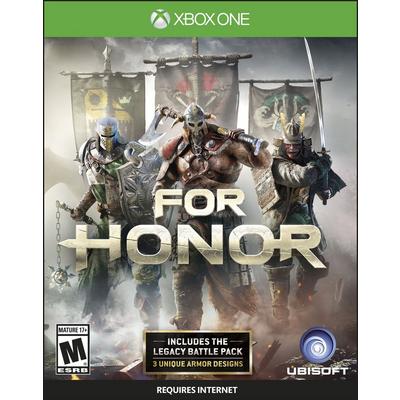