Powered by Frostbite™, EA SPORTS™ FIFA 20 for the PlayStation 4, Xbox One, and PC brings two sides of The World’s Game to life - the prestige of the professional stage and an all-new authentic street football experience in EA SPORTS VOLTA. FIFA 20 innovates across the game, FOOTBALL INTELLIGENCE unlocks an unprecedented platform for gameplay realism, FIFA Ultimate Team™ offers more ways to build your dream squad, and EA SPORTS VOLTA returns the game to the street, with an authentic form of small-sided football.

EA SPORTS VOLTA takes football back to the streets, representing the authentic culture, creativity and style of the small-sided game. Build your character, express your style, and play various forms of free flowing-football in environments all over the world.

Experience FOOTBALL INTELLIGENCE, a complete rethink that unlocks an unprecedented platform of football realism. FOOTBALL INTELLIGENCE elevates every living moment on the pitch: on-the-ball, off-the-ball, and through-the-ball. Built on three core pillars: Decisive Moments (on-the-ball), Authentic Game Flow (off-the-ball), and Ball Physics (through-the-ball), this approach is intended to put the user at the centre of every match.

Authentic Game Flow: Awareness of time, space, and position are fundamental intelligences of world class footballers. With Authentic Game Flow every AI controlled player will operate in a manner that considers these components, delivering an environment that creates more time and space, putting greater emphasis on user-controlled play.

Decisive Moments: Football is made up of a series of pivotal moments that determine the outcome of a match. From Composed Finishing in the final third to Controlled Tackling in the back, matches will be won or lost through user controlled Decisive Moments.

Build your dream squad from thousands of players and compete in the most popular mode in FIFA. Featuring content from UEFA Champions League and Europa League, the world's most prestigious club competitions come to life with live content in FIFA 20 Ultimate Team.

FIFA 20 Ultimate Edition is rated 4.1 out of 5 by 1237.
Rated 1 out of 5 by Disappointed128 from They have the audacity They have the audacity to charge full price for a roster update.
Rated 1 out of 5 by Pokrmstr from Garbage I have bought and played fifa for the last 8 years but this game is trash. Nothing works in the game. If you don’t get called for a foul by doing nothing, then the rebounds from defense will just go right back to the opponent. Goal keeper only catches the ball half the time and you will only pass to who you are aiming to half the time. The other half the keeper will just punch the ball right back to the opposition for an easy goal and then the other half you will just pas the ball to someone completely in the opposite direction. Complete waste of time to try and play. STAY AWAY from this game!!! Save your money. Just awful. I’ve also noticed hardly anyone rated this game above a 1 Star with all bad reviews so that really says something.
Rated 1 out of 5 by Jackaboi from Worst FIFA game in history The worst game I have ever played. It amazes me how ea can release such garbage and get away with it
Rated 1 out of 5 by NYC3917 from Utterly Disappointing I am one who considers giving games the benefit of the doubt until all the patches are released. Even so, this is the worst game to come out of the series ever. And this is going to deter a lot of the people from buying the game next year.
Rated 1 out of 5 by Purgatory450 from Do Not Buy I’ve bought FIFA year after year, and I regret this purchase more than any game I’ve ever bought. It is so broken on all levels, that I’d have to write a novel to tell you all about it in this review. If you don’t already know, checkout any FIFA player on YouTube and you’ll hear from them first hand how bad it is. Yes, the people who make money to play the game even dislike it. Awful. Not buying again. Be strong, don’t buy this or the next edition. Your wallet and sanity will thank you.
Rated 1 out of 5 by Danielv666 from Glitches The worst FIFA game hands down wanted to believe this game was not as bad as people made it out to be but man what a let down EA . The glitches are ridiculous in this game The game play is good but that’s about it the glitches and all the little annoying bugs ruin this game.
Rated 2 out of 5 by Bfarley1121 from Decent game Graphics and gameplay were good. But I don’t know a thing about soccer so everything else was confusing
Rated 2 out of 5 by Claretny from Same as always I’ve bought this game since 2006 and since 2015 they had been pretty much kept everything the same but added little things after the next release

what commentator languages does this one have? I am frustrated that some versions support those, some these.

Asked by: Peter9
Not possible to download languages. I see on EA website many complaints, too, about this with no answers from EA. Fifa 18 had more languages.
Answered by: Peter9

Does this has the womens teams on it too?

Can I use this with my lite?

Asked by: dianam6
I think you can, but I&rsquo;m not sure.
Answered by: Miguel20

Is this the physical game or code ?

What type of special content does the Ultimate edition have in compared with the standard edition?

Will the Bonus Code be provided when I pick up the game?

what's the difference between fifa 20 and fifa 20 champions edition 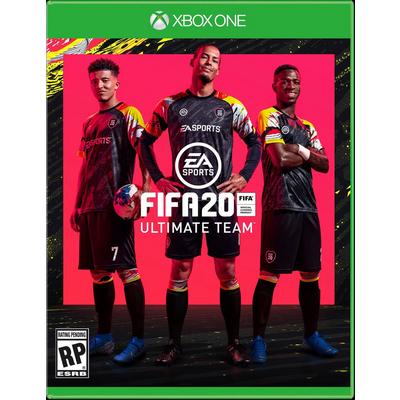