Blood and Gore
Drug Reference
Intense Violence
Strong Language
Use of Alcohol
Fallout 76 Tricentennial Edition is rated 3.1 out of 5 by 224.

Blood and Gore
Drug Reference
Intense Violence
Strong Language
Use of Alcohol
Fallout 76 Tricentennial Edition is rated 3.1 out of 5 by 224.
Bethesda Game Studios, the award-winning creators of Skyrim and Fallout 4, welcome you to Fa Read More
$13.97 - $79.99

Get it this way:
Free pick up at store with delivery@door
at
Out of Stock at .
Check other stores
Everyday Free Shipping $35+
DELIVER TODAY NEXT DAY
($8.99 FEE PER ORDER)
Learn more
Deliver to
Verify Address Change
Please provide your address to verify you are within our delivery area.
Select Condition For Availability
Buy Together
Bethesda Game Studios, the award-winning creators of Skyrim and Fallout 4, welcome you to Fallout 76, the online prequel where every surviving human is a real person. Work together, or not, to survive. Under the threat of nuclear annihilation, you'll experience the largest, most dynamic world ever created in the legendary Fallout universe.

Reclamation Day, 2102. Twenty-five years after the bombs fall, you and your fellow Vault Dwellers—chosen from the nation's best and brightest – emerge into post-nuclear America. Play solo or join together as you explore, quest, build, and triumph against the wasteland's greatest threats.

Celebrate 300 years of freedom with the all-new Fallout 76 Tricentennial Edition, commemorating the opening of Vault 76. Our good friends at Vault-Tec have pulled double shifts, working around the clock to assemble this one-of-a kind compilation…for you! Be the talk of the town when you emerge from Vault 76 fully prepared and patriotically styled in the new American frontier!

The wait is almost over. Soon new faces will flow into the wilds of West Virginia and it will be up to you to welcome them with open arms (or loaded weapons). We are excited to share that Fallout 76 owners will be able to experience the Wastelanders expansion for free on April 7 on Xbox One, PlayStation 4 and PC through Bethesda.net. Fallout 76 will also be coming to Steam on April 7, and Wastelanders will be available to anyone who purchases the standard or deluxe editions of the game. In addition to introducing fully voiced NPCs to the world of Fallout 76, Wastelanders brings a brand-new main questline, new locations, new enemies, new weapons, a new reputation system and much more. Get ready for Wastelanders with a new trailer and learn more about how you’ll be able to play it on April 7.

The following bundles will be available for purchase by Fallout 76 owners:

Does this come with a physical game map that is folded up and put in the case with the game?

Asked by: Moleratstew
It does not come with a map.
Answered by: Wesley19

Is there a disc or is it just a code

Asked by: Plzhelpmeinpumkin
I bought the game and it was the Disk. Depending on which version you buy might be some downloadable content which will be a code.
Answered by: The Jar

this is the Season Pass version right?

Asked by: Jote
No this does not come with the season pass. Just extra cosmetic content in game.
Answered by: Wolfangseven

Is it single player

Asked by: Taeganmaster123
No, its a multi player online game that looks like a single player.
Answered by: dkf89

How much better is the tricenttenial version of Fallout 76 then the regular?

Asked by: ArchieM
It isn't. All of the editions for any game released these days barely have a difference as far as content other than a minute insignificant digital downloadable waste of money. All of these different editions are designed to grab more money out of the consumers hands and offer barely an equivalent to what you have spent. In all actuality majority games released today are broken and half built but with the promise of being completed as long as you as the consumer pay your share into the facade that they call a well worth the money, &quot;complete,&quot; game. And you allow the devs to patch work your &quot;complete&quot; game for years to come as they are already onto the next money grabber...
Answered by: DIRTYYETTI32
Fallout 76 Tricentennial Edition is rated 3.1 out of 5 by 224.
Rated 1 out of 5 by addbc from Useless Employee didnt bother to inform me that it doesnt work without xbox live never even opened it and took it back
Rated 5 out of 5 by Shelley o from Love this game Love this game and the store helped me purchase the steal book case version thanks game stop;)
Rated 1 out of 5 by PMSS from Run far away buy any other game! This is my second time buying this game. Decided to give it another try. Still unrealistically hard with no difficulty level setting. If you get killed during game play be ready to redo some events because game play is not saved very often and no user save feature is available. Even though you have to do your battle scene over again they did manage to be sure any ammunition you used before you got killed isn’t returned! Then you are expected to redo your battle with less ammunition. Very disappointed the game is also all over the place with no clear path to follow. Glitches still abound the worst are when you are at a work station trying to craft something and the game freezes up. Your only recourse is to shut off the system. Then you are left backtracking trying to make up some progress. I tried to trade in the game I got on sale for $39 but they would only give me $6 in credit. I asked why so little in credit the store told me because they are overrun with used copies of the game no one wants them. From a great lot of fun with Fallout 4 to this terrible disappointment.
Rated 4 out of 5 by TimothyC from Locked Great online play. Too many items are level or blueprint locked.
Rated 5 out of 5 by deBrig from I've been pleasantly suprised I've never been an online gamer. I've always preferred to game at my own pace in my own world. This has been a whole new experience for me and I have to say, I don't hate it. It's quite a bit different but enjoyable. The game itself is amazingly beautiful. I've always been a major Fallout fan so I had to have it, of course.
Rated 4 out of 5 by RedSkull1938 from Getting started The game is glitchy, but it has a lot of potential
Rated 4 out of 5 by Big Poppa Pump from Not a bad game. Saw a lot of bad reviews about this game which stopped me from getting it on release. Glad I waited because it looks like updates have improved it. There is still some minor issues but I have been enjoying it so far.
Rated 2 out of 5 by TankerMedic from Not a true fallout game. Wish I could get a refund. This is not a true fallout game. I’m tired of these “online only” games where it is nothing more than a large shoot-em up arena. 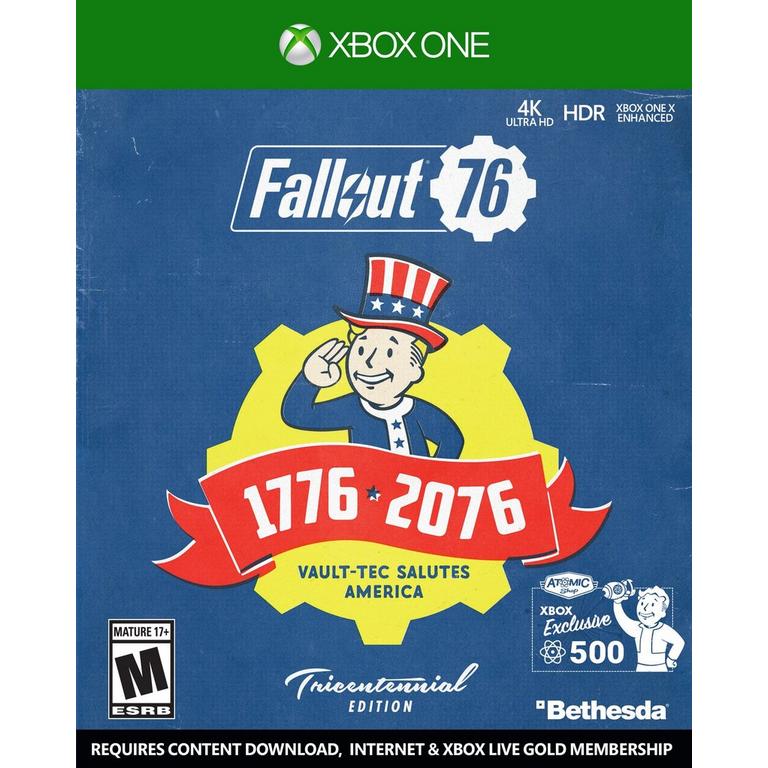