The world's most powerful console.

Games play better on Xbox One X. With 40% more power than any other console, experience immersive true 4K gaming. Blockbuster titles look great, run smoothly, and load quickly, and you can bring all your Xbox One games and accessories with you.2

Games play better on Xbox One X. Experience 40% more power than any other console.

Unleash 6 teraflops of graphical processing power. Games play better on Xbox One X than they ever have before. Maximize game performance with the speed of 12GB GDDR5 graphic memory. And see every frame with 326 GB/sec memory bandwidth.

Lose yourself in worlds built for true 4K gaming, where action is brought to life with 2160p frame buffers. Enjoy brilliant graphic details in light, shadow, and reflections with High Dynamic Range7 and Wide Color Gamut. Experience premiere sound that puts you in the center of Spatial Audio. Stream and record game clips in 4K at screaming-fast 60FPS.

You can only play 4K games like Forza Motorsport 7, Super Lucky's Tale, Crackdown 3 and Sea of Thieves, the way they're meant to be played on Xbox One X.6

All games look and play great on Xbox One X. But select titles are optimized to take advantage of the world's most powerful console. These games are Xbox One X Enhanced.

Find friends, rivals, and teammates in the best global gaming community. Enjoy dedicated Xbox Live servers maximize performance by ensuring stability, speed, and reliability. Compete, connect, and share across platforms with gamers on Xbox One and Windows 10.8 And get 2-4 free games each month with Xbox Live Gold5

Watch Blu-ray™ movies in stunning 4K Ultra HD. Stream 4K video on Netflix, Amazon, Hulu, and more.1 Whether you're playing, watching or streaming, Xbox One X delivers brilliant graphics with HDR7 technology. See your TV in a new light—games on Xbox One X look great even on a 1080p screen.

Compatible with everything Xbox One

Your Accessories All the Xbox One accessories you've got now work with Xbox One X. No adapters, no hassle just play.

Your Community Easily bring along your Xbox Live friends, clubs, game saves, and achievements to your new console.2

Your TV See your old TV in a new light—games on Xbox One X look great even on a 1080p screen.

Xbox One X 1TB Project Scorpio Edition is rated 4.6 out of 5 by 106.
Rated 2 out of 5 by Videogames82 from Works great when it works. I bought the Xbox one x Scorpio edition about 4 months ago, it works the same as my old Xbox one S did however my one S did not freeze 1/5 games I played of multiplayer. I have not noticed any resolution improvement, (may or may not be my TV). My console had entirely shutdown mid-game, froze the game, and has overall been glitchy in game since I have owned it. I would not recommend this console to any serious gamer.
Rated 5 out of 5 by unit00000000001 from Now I need a 4K TV My favorite feature is the backward compatibility. But it's also got some kick, and an expansive library. The backwards compatibility is limited, especially on the original xbox games. But I only have so many HDMI's.
Rated 3 out of 5 by 0ns1aught from No exclusives, haven’t even touched it yet Bought this months ago, and wonder why I ever did. It’s a good Blu-ray player
Rated 1 out of 5 by pplzlbow from Stopped working after 2 months. My system wouldn’t turn on after 2 months. Even though it’s under warranty, I have to wait 14+ days to get it back. I’m thinking Gamestop sold me a lemon
Rated 5 out of 5 by IBangedYourMom from People love to hate this, not me. Best console out I traded up from the One S, and thought it was only going to be a minor improvement. I was very wrong. Every game is better, even if they aren’t One X enhanced.
Rated 3 out of 5 by Crunky 101 from Lots of issues and bugs but..... Power up issues right out of the box. It dislikes ANY USB accessories when starting...as in it will flat out refuse to power on until the device that hurt its feelings is removed. It will lose the wireless link with the controller from time to time, lose connection when the controller is connected by cable, randomly shut down whenever it feels like it. Still, for all of its flaws, games and movies look amazing!
Rated 5 out of 5 by Nwb559 from 4k Excellent gaming experience from loading to picture quality
Rated 5 out of 5 by ItsTheSeabass from Awesome I've had an xbox since gen 1. Great upgrade from the standard xbox one. Love it

Hi, I&rsquo;m looking to buy this for my boyfriend on our 1yr anniversary. I am just curious if this comes with controllers? I have been trying to find if it does or not and I can&rsquo;t get a clear answer.&nbsp;

Asked by: Nyx2
Yes, one wireless Controller which says &ldquo;project Scorpio&rdquo; on it.
Answered by: Ctowndrama

What is the difference in the scorpio addition and a normal xbone One X with 1tb of memory?

Asked by: Shaw55
Only Aesthetics.. performance and spec wise, there is no difference. You also get a &quot;scorpio edition&quot; matching controller.
Answered by: Aki002

Asked by: Jackson R
It comes with the trials for game pass and live gold. The project Scorpio does not come with any games in the box.
Answered by: Beephee

What&rsquo;s the difference in this Xbox and the normal one

Asked by: 0568Yeet
The Project Scorpio Edition is merely an appearance package. Internally it is the same as a normal Xbox One X. Scorpio has an array of alternating light and dark gray squares across the top of the console, giving it a textured look; it's subtle. It also says &quot;Project Scorpio&quot; in green lettering right above the opening of the disc drive and also vertically right in the middle of the controller, below the home button. The controller also has smoked out ABXY buttons. Oh, it does come with a stand to put the console vertically if you choose, which is like a $20 item, so that's cool, and the box everything comes in had a different overall look than a standard box. Hope this helps.
Answered by: shirleyjp86

Is this project Scorpio new or refurbished?

Asked by: Wcollins4148
Just bought one Tuesday, and it's slated to be here this coming Tuesday. So, I'll let you know then. The description here SAYS new, but if it's not, rest assured I'm making a stink out of it. I'm not paying full price for a hand-me-down.
Answered by: shirleyjp86

What is the difference between this and a normal Xbox one X?

Asked by: CT33
Currently available at GameStop Online. I wouldn&rsquo;t expect them to be around much longer despite the few &ldquo;in stock&rdquo; pop ups that occurred randomly
Answered by: Ctowndrama 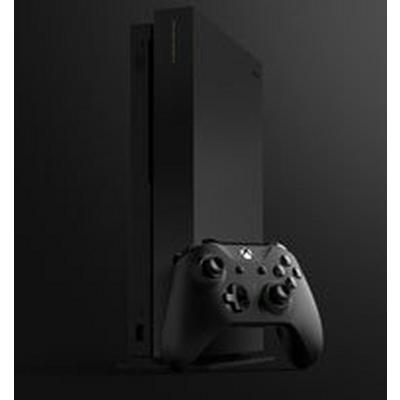