The TURTLE BEACH® STEALTH 600 is the latest gaming headset for Xbox One, debuting Microsoft's new Xbox Wireless direct to console technology and Windows Sonic surround sound, plus an all-new modern style with a flip-up mic and an abundance of features, including ProSpecs™ glasses friendly design, Superhuman Hearing™, audio presets including Bass Boost and much more…

Xbox Wireless provides you with a best-in-class wireless gaming audio experience on Xbox One (and compatible Windows 10** PCs) by letting you connect your headset directly to your Xbox One without an adapter, the same way your Xbox One wireless controller connects to the console. Xbox Wireless automatically configures the headset’s connection, so just turn-on the headset and start playing. **May require Xbox Wireless Adapter for Windows (not included).

With Turtle Beach's exclusive Superhuman Hearing® sound setting, you'll have the competitive advantage by being able to hear all the subtle yet game-changing sounds, like enemy footsteps sneaking up on your six, other players reloading their weapon for an ambush, and vehicles off in the distance approaching with reinforcements. It's vital intelligence for the split-second, life-or-death decisions that elevate great gamers above the rest. Hear Everything. Defeat Everyone.®

15-Hour Battery Life
An onboard rechargeable battery delivers up to 15-hours of gaming per charge, so you'll always be ready to play.

Glasses Friendly
The latest version of Turtle Beach’s patented ProSpecs™ Glasses Relief System features dual-foam ear-cushions, with softer foam in the section of the ear-cushions that rests against your glasses, alleviating pressure and allowing gamers with glasses to play in comfort.

Flip-up Mic
Turtle Beach’s renowned high-sensitivity mic takes on an all-new form, picking-up your voice loud and clear to ensure your commands are always heard. Plus, it flips up out of the way to Mute when not in use and blends into the headset’s design.

Mic Monitoring
Say it… don't shout it, thanks to the ability to hear the volume of your own voice inside the headset to avoid shouting at teammates and other players.

What's in the Box 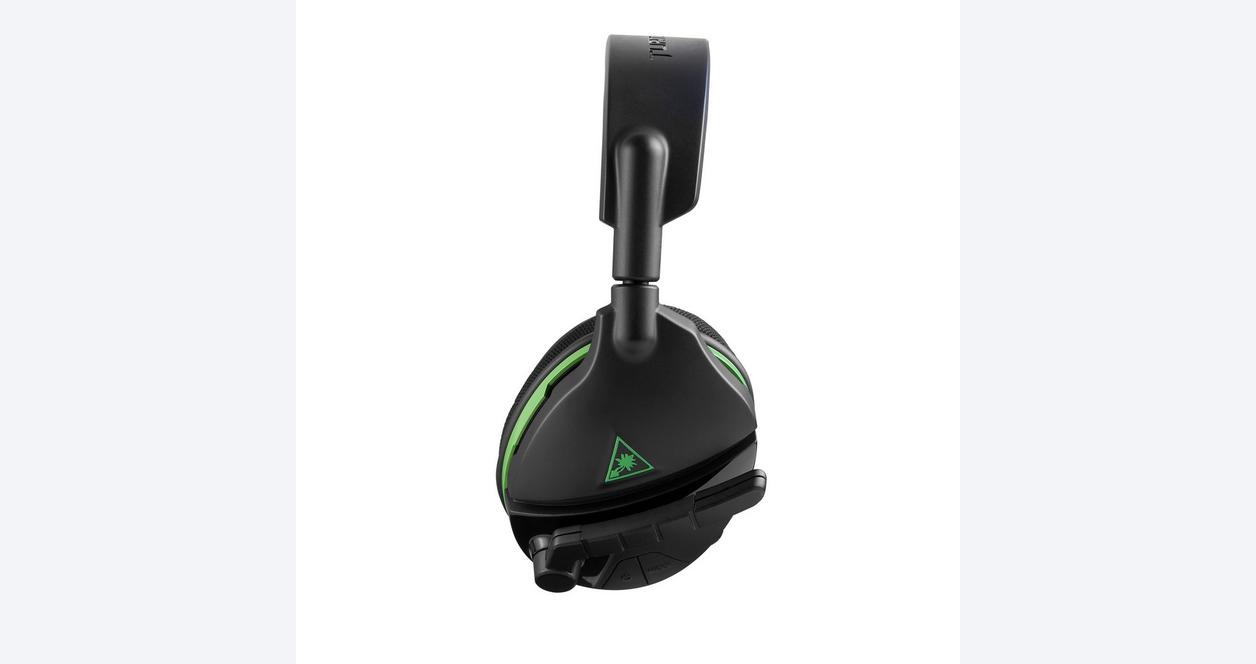 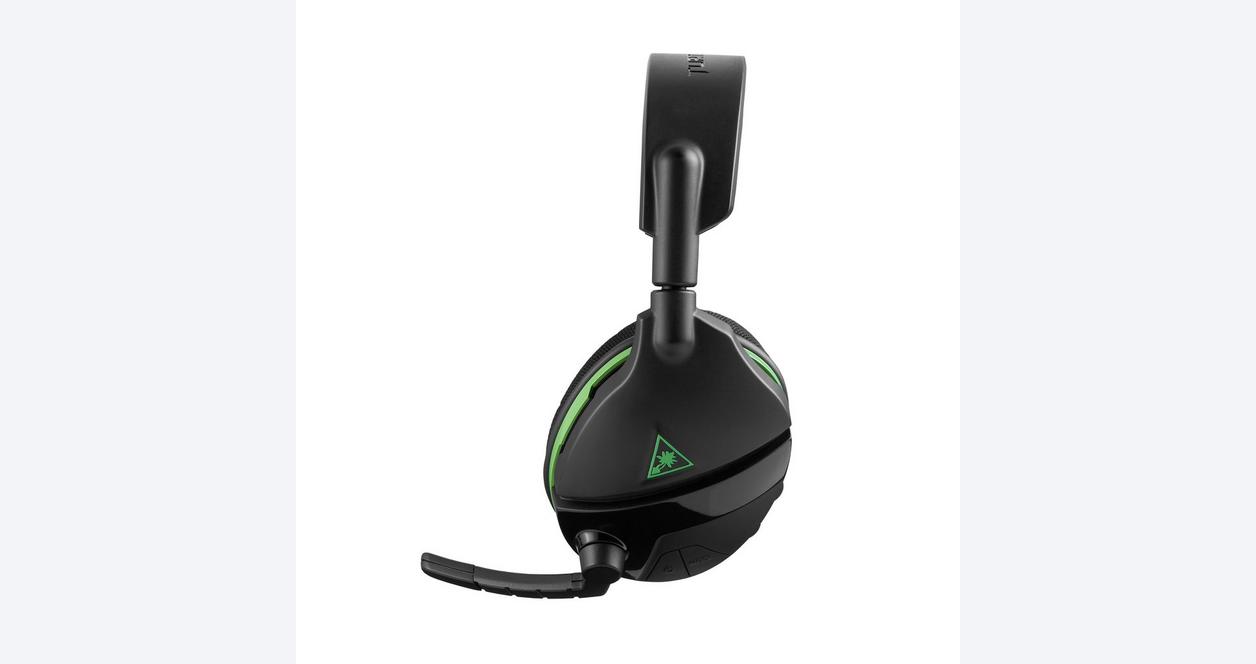 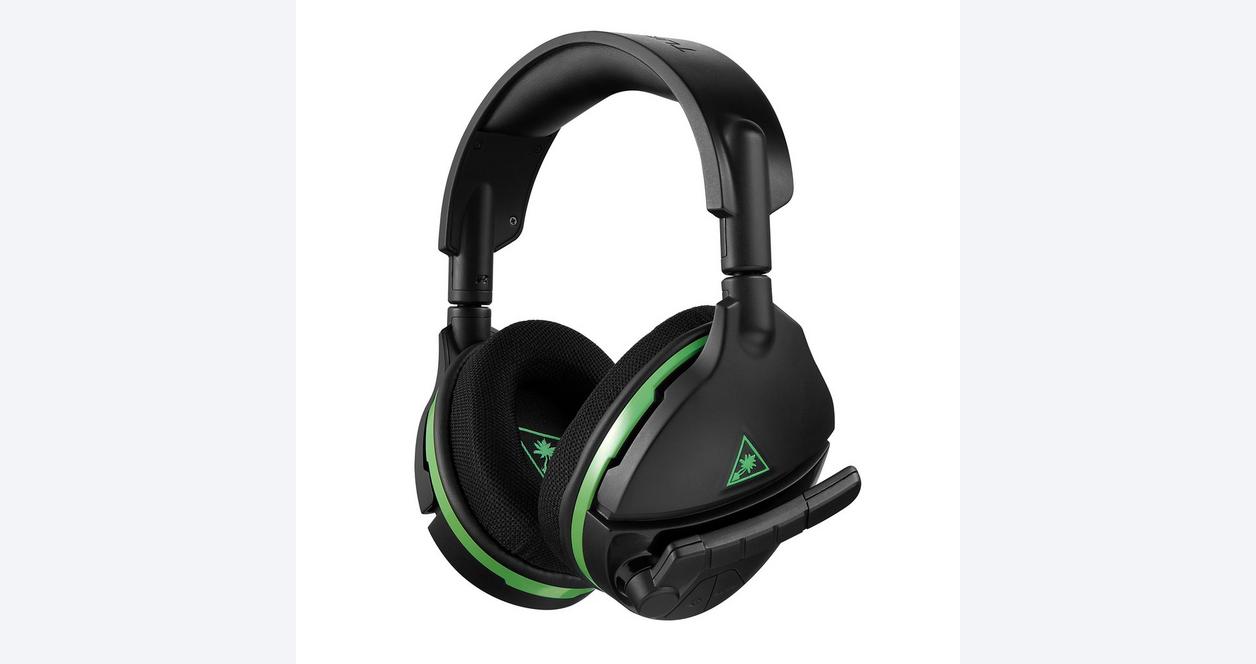 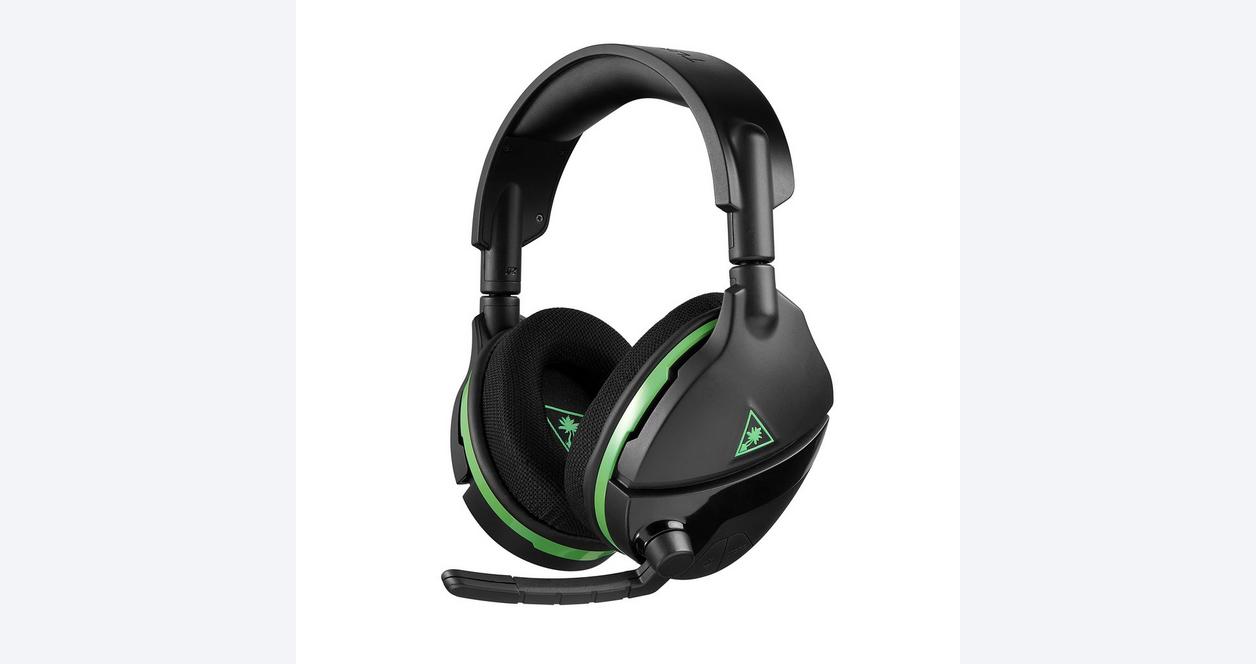 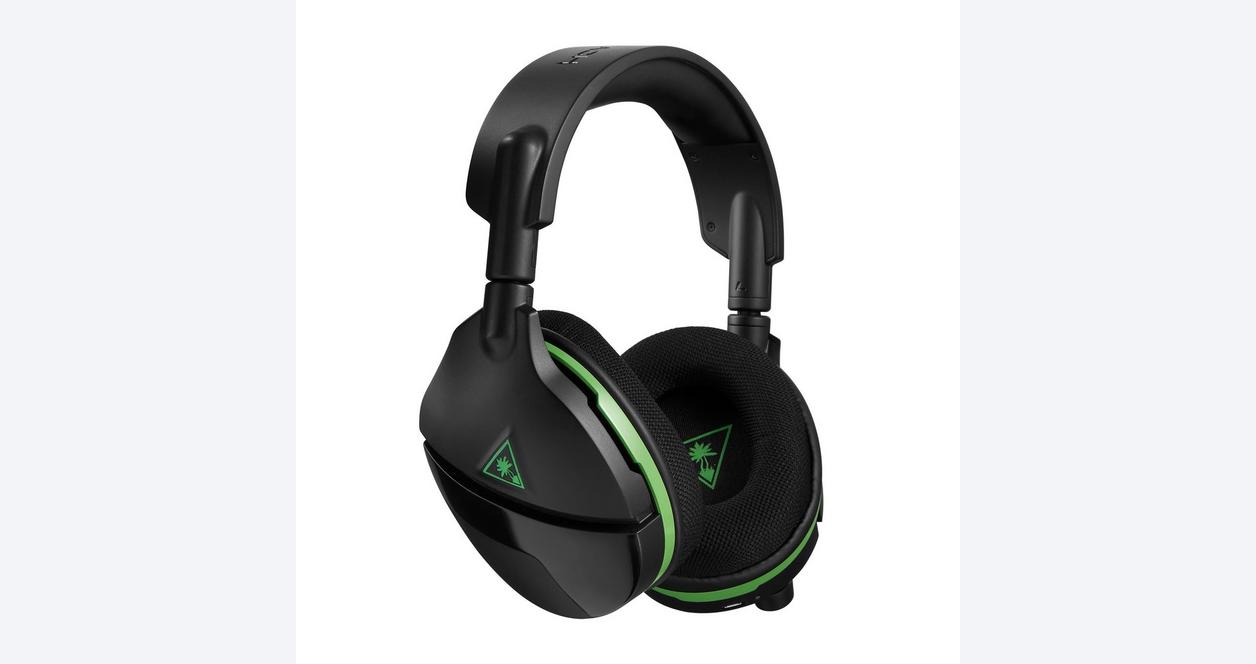 Xbox One Stealth 600 Black Wireless Gaming Headset is rated 4.4 out of 5 by 1356.
Rated 1 out of 5 by Budocha from Xbox one stealth 600 It’s very tight on the head. A lot of pressure after a wile.
Rated 4 out of 5 by Raider Boom from I bought this like 4 months ago. It was great. The right side like broke off down to just the wires holding it on. Plastic is definitely pretty cheap. I would recommend this headset!
Rated 4 out of 5 by GAARmachine from Not bad, not great, but not bad A nice headset, but you can tell the plastic is a bit on the cheap side. Seems like one or two drops would probably break them. The sound is good though and the price for wireless is competitive.
Rated 5 out of 5 by Inialator from Awesome sound and features! Great sound and by far the best headset that ive owned. The dual audio volume is a great feature to be able to control mic audio of other players and the control for just the game itself. The audio sound presets are really nice too.
Rated 1 out of 5 by allthenamesareused from What a joke I got this for my birthday and ever since December it's decided to suck. It randomly cuts out, mic is trash, buggy and annoying, mic is in a weird place, sometimes the mic won't mute, its "superhuman hearing" I more like "Make your ears bleed for 24 hours and oh yeah you can't hear extra stuff like advertised. You may still want to buy this mic after all of the things I said because of all the other reviews, go ahead, but don't be surprised if it starts doing the things I mentioned.
Rated 5 out of 5 by Navia290 from Love it They last almost all day. I have brought this same one before and it doesnt disappoint.
Rated 2 out of 5 by AlanJW from Meh.... When I first bought this it wasn't terrible, but shortly after I started to notice the flaws. I wanted to use this headset for both my Xbox AND my PC which I knew was possible, via a headset adapter, but this adapter is possible the worst product I've ever used. The button on top would hardly click and if it did, I couldn't tell. There a was hardly visible light that would blink, but it seemed like you had to be in pitch black to see, and even then you had to be two inches away and squinting. Even when pressing the button on the adapter, it wouldn't engage and start syncing. I soon gave up and bought a separate headset for just my computer, but continued to use this one for my Xbox. After awhile I wasn't very pleased with the headset overall. After the whole experience with the adapter I already wasn't a huge fan of the headset, although I guess I was more mad at the adapter, and then after I ordered a new headset I realized just how uncomfortable and low quality this mic really is. The ear pads always feel awkward and uncomfortable on my head, especially after a long period of time. The mic is just not the greatest mic to ever exist, and was told how much better my new mic is, than this one, after I got it. The cushion for the ear pads aren't even that soft, which I know seems picky, but coming from a guy with glasses, this is kind of a big deal. I guess, overall, my experience with this headset was just not a good one, in fact I've heard first hand that some people like it but I guess it's just not for me. This is just my opinion, I would not have bought it, even though having a Bluetooth headset seem nice, and maybe some other ones are, do no let that influence your decision for this purchase. I, personally, would not recommend it to anyone, even though I did not completely hate it, I just think there are other, better, options out there that are more worth both mine and yours money.
Rated 5 out of 5 by Porkchopper from Great Headset! Good sound quality for someone as myself who is half def from all the kicker subs back in the day... lol

Are these glasses friendly?

Dose it come with a charging stand for it

What is the range distance?

Asked by: TerriVal
Depends on the walls and barriers you go through. If you go 2 rooms away it starts to cut out but if you go across 1 wall you can go about 20 ft before cutting out. It isnt the greatest, but it's great for the cost.
Answered by: Sir WB

Do these simply connect through Bluetooth for PC? Or do you need an adapter?

Asked by: Kris Seredis
Works pretty effortlessly with the Xbox, that being said you should just be able to connect the Xbox adapter to your usb and still connect them that way. I don't think they're Bluetooth compatible.
Answered by: NorseGuardiab

The mic on my brothers headphones aren&rsquo;t working. Is it just for show, or is there a way to fix it?

Asked by: Jazzy0215
Run a hard reset on the console. If that doesn't work, ensure the headset is assigned to his profile
Answered by: Chuckielove21

Hey do these come with a headset charger?

Asked by: Anonymous16795433467
In a previous question, no they do not but you can plug them in any USB port.
Answered by: InkyBunBunz

Can these wireless headphones connect with a desktop computer as well??

Asked by: Rayna98
If you have a compatible Windows 10 computer. Talks about it in the description.
Answered by: InkyBunBunz

How do you charg them

Asked by: Logan h
Use any standard USB port and charging cord. I use the port on my tv.
Answered by: SicMonky 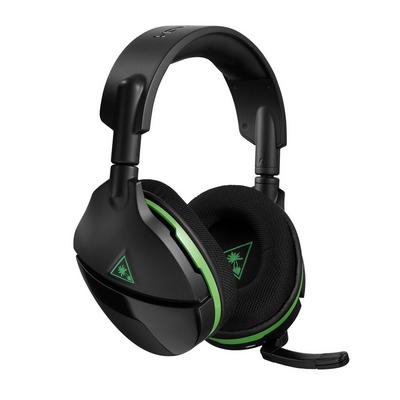