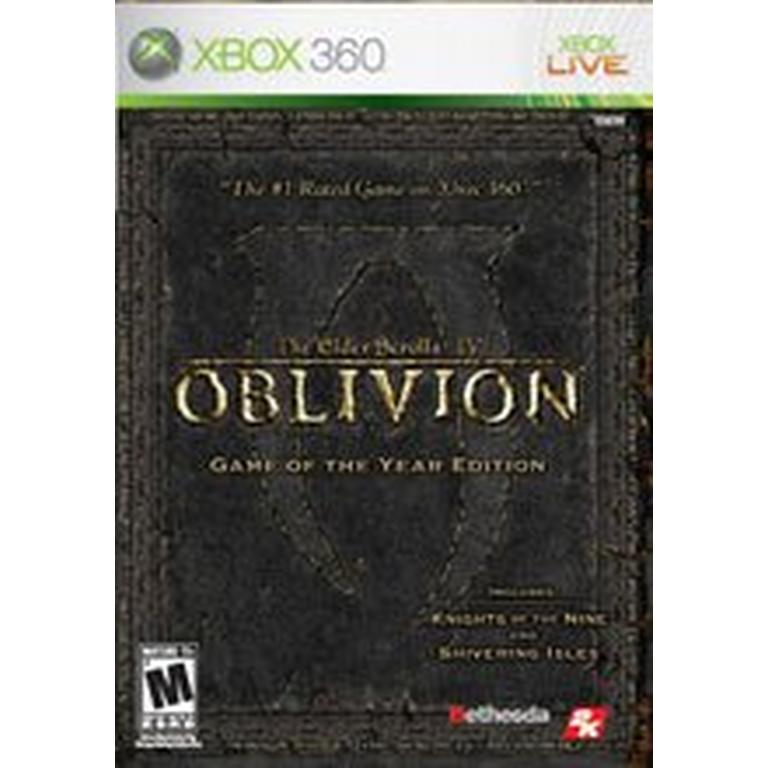 The Elder Scrolls IV: Oblivion Game of the Year Edition

Blood and Gore
Language
Sexual Themes
Use of Alcohol
Violence
Take 2 Interactive
The Elder Scrolls IV Oblivion Game of the Year Edition is rated 4.6 out of 5 by 271.
N/A
Select Condition For Availability
Please Choose An Option

Oblivion is the quintessential role-playing game for the next generation and another leap forward in gaming. Step inside the most richly detailed and vibrant game-world ever created. Oblivion is the latest chapter in the epic and highly successful Elder Scrolls saga and utilizes the latest Xbox 360 and next-generation video game hardware to fully immerse you into the experience. With a powerful combination of freeform gameplay and unprecedented graphics, you can unravel the main quest at your own pace or explore the vast world and find your own challenges.
More Details Less Details

After the mysterious and untimely death of the Emperor, the throne of Tamriel
lies empty. With the Empire ready to crumble, the gates of Oblivion open and
demons march upon the land-laying waste to everything in their path. To turn
the tide of darkness, you must find the lost heir to the throne and unravel
the sinister plot that threatens to destroy all of Tamriel.

In keeping with the Elder Scrolls tradition, players will have the option to experience the main quest at their own pace, and there will be plenty of opportunities to explore the vast world and make your own way. Numerous factions can be joined, such as the thieves or mages guilds, and each contains its own complete storyline and the chance to rise to the head of the faction and reap further rewards.

Oblivion is a single-player game that takes place in Tamriel's capital province, Cyrodiil. You are given the task of finding the hidden heir to a throne that sits empty, the previous emperor having been killed byan unknown assassin. With no true Emperor, the gates to Oblivion (the equivalent of hell in the world of Tamriel) open, and demons begin to invade Cyrodiil and attack its people and towns. It's up to you to find the lost heir to the throne and unravel the sinister plot that threatens to destroy all of Tamriel.


Live Another Life in Another World. Create and play any character you can imagine, from the noble warrior to the sinister assassin to the wizened sorcerer.

* Next Generation Graphics. Pixel-shader effects and high definition televisions are fully supported to create unprecedented visuals, including lifelike towns, dungeons, and the most realistic forests ever created in a game.

* First Person Melee and Magic. An all-new combat and magic system brings first person role-playing to a new level of intensity where you feel every blow.

* Radiant AI. This groundbreaking AI system gives Oblivion's characters full 24/7 schedules and the ability to make their own choices based on the world around them. Non-player characters eat, sleep, and complete goals all on their own.

* Realistic Characters. Oblivion's features over 1,000non-player characters who come to life like never before with facial animations, lip-synching, and full speech. They even engage in unscripted conversations with each other and you.

* Open-Ended Game Play; Short Challenges. The enormous world of Oblivion is open for you to explore at your own pace, and shorter challenges such as fighting bandits, mixing potions, creating magic items and persuading friends keep the challenges coming.

The Elder Scrolls IV Oblivion Game of the Year Edition is rated 4.6 out of 5 by 271.
Rated 3 out of 5 by Hadium762 from None So I bought this approximately 3 days ago and I just noticed the first disk is scratched everywhere (can't use photo it's dark)
Rated 5 out of 5 by McSteezzyy from A legend Amazing game, still loads of fun after all this time
Rated 3 out of 5 by MIllusion1992 from Feels like PC not Xbox 360 Not the same as it felt when i was younger the game seems boring to me and it almost feels like its not elder scrolls to me i bought the game because i love the rpg mode but it feels like i am playing a pc game and not 360.
Rated 3 out of 5 by Robert Pardee from A good RPG for killing time. It has it's pros & cons like any game, but once I got the controls set to my liking it's an enjoyable game. Learning some basic game lore helps, I think.
Rated 3 out of 5 by Monkey127 from Horrible graphics Don’t like the graphics. You run and it’s like you are sliding over the ground instead of walking on it.
Rated 5 out of 5 by Bufordspta from Very good game. One of the industries finest games well worth the recognition of game of the year.
Rated 4 out of 5 by Conrad Z from Elder Scrolls IV: Oblivion Classic Elders Scrolls installment. Amazing game, graphics are very out dated but still very fun.
Rated 5 out of 5 by InnocentDeath5 from All good but graphics were out-dated I Really enjoyed oblivion it was really fun and itwas a great timekiller , the only thing i didnt like was the graphics that about all

Does this come with the dlcs

Asked by: Ossy117
If you have the game of the year edition yes it will have dlc
Answered by: Babe917

Does the pre-owned version have dlc?

Asked by: burgermeister
If the second disk is with it then yes but u have to load the 2nd disk 1st so all the content is in there when u start
Answered by: Rico suave

Is this playable on the xbox one?

Asked by: Chocobboby
Thank you for your question! Yes, this game will work on the XB1. https://www.xbox.com/en-US/xbox-one/backward-compatibility/available-games
Answered by: GameStopTeam23