Mild Violence
Need for Speed Rivals is rated 4.0 out of 5 by 113.
Please Choose An Option

Mild Violence
Need for Speed Rivals is rated 4.0 out of 5 by 113.
Please Choose An Option

Trade Value
Select Condition For Availability
Welcome to Redview County, where a street-racing rivalry between cops and racers never stops as both sides compete in an all-out war featuring the fastest cars, mods and technology in a stunning open-world environment. Play as either a cop or racer, where each side of the law has its own set of high stakes challenges, rewards and consequences. Risk everything in the ultimate high stakes rivalry.

Will You Cross The Line?

Welcome to Redview County, a gritty open road environment where the intensity of the street's ultimate rivalry between cops and racers never stops.

Watch the stakes grow through a new scoring system that lets racers risk their speed points to shoot for higher multipliers and greater rewards, or bank their speed points safely when they return to a hideout. The more risk you take on, the faster you can progress, but get busted by the cops and they take your speed points as a reward. Hundreds of thousands of speed points can be at stake at every turn and at every bust – will you go from hero to zero?

Racers are all-in for personal glory, leaving only exhaust and burnt rubber for their rivals

Have no rules, show no mercy

Cops operate as pack animals collectively locking down their targets

This revolutionary new feature lets you seamlessly join a world where your friends are already racing and chasing. Single-player and multiplayer are no longer isolated game modes. There are no lobbies, no waiting; everything is seamless. You and your friends can all share the same game, same race and same chase. Paths cross and experiences merge: imagine your race and your friend's pursuit colliding creating a world where no two events will ever feel the same. Don't want to play with others? Then simply choose to make Redview County yours alone and dominate the advanced racing and cop AI.

A living world awaits you filled with an overwhelming amount of speed, races, and chases.

Spontaneously challenge a rival or friend to a race or chase instantly.

YOUR CAR, YOUR IDENTITY

Power up your car with the latest upgrades in pursuit technology and personalize your bodywork with fresh paint jobs, liveries, custom license plates, rims, and decals to show off your car to the world. With millions of potential combinations, you can save different configurations and keep a variety of car packages on alert to leave your mark no matter the situation.

Racers are lone wolves out for their own glory; driving agile cars built for high-speed racing and epic chases. Cops work in teams to hunt down and bust racers using the full power of the police force. Intense racing moments are made even more thrilling with access to upgradeable pursuit technology customized to each side. Racers use this technology to evade cops – using techs such as turbo bursts, jammers, and electromagnetic pulses. Cops will be armed for aggressive busts, deploying shockwaves, jammers, and calling in police roadblocks or helicopter support. Each side has a different set of supercars, technology, tasks, and career milestones. Switch sides whenever you want to get that car you need, the tech you want, and the role you crave in a progression system that is different for each side.

The network will be the hub for continuing your racing and chasing with access to stats, leaderboards and content uploads direct from the game. Breakdown what's happening in your friend's worlds in real time, join groups to team and engage on the forums. Share your progress and images with your social networks. Prep for your next gaming session as you build playlists, and add your latest rivals to your friend's list.

Engage with Need for Speed Rivals from the web, tablet, or mobile in Overwatch, a mini-game that connects you with the console/PC game by letting you help or hinder your friends to earn points towards exclusive paint jobs.

Asked by: NayLove
Only one per console but you can play with others through Xbox live.
Answered by: Kim032777

Do you have to be online to play this game

can you play split screen on xbox 360 without xbox live

Do you have to be online to play this

Does this game need WiFi to play it?

Asked by: abe3
Need for Speed Rivals is rated 4.0 out of 5 by 113.
Rated 5 out of 5 by Michael Buckla from Fast, cool , sort of hard to start with Great game ? Looking for xbox 360 console 250 ,500 Mine blew out
Rated 5 out of 5 by falcnfighter19 from Need for speed rivals The absolute best need for speed game I have played yet totally recommend it for everyone
Rated 3 out of 5 by Dannyboy31 from Need for speed rivals It didn't say that I needed a full hard drive to play it
Rated 4 out of 5 by Athomas7713 from Just me In this game you can play both side of the law as a cop or a street racer.
Rated 4 out of 5 by Zach F from Good game Good racing game. Frustratingly smart Cop A.I. though.
Rated 5 out of 5 by Anonymous from SPEED IS HERE ...Kill The Need As soon as i started playing i WAS ALL IN FAST CARS BUILD EM UP AND STR8 DESTROY HIGHWAY whats better than a GREAT STREET RACE .and i WONT DO IT but you can break the mode and go in as a COP and get at the RACERS ...also storyline narrated to you builds play motivation ....
Rated 1 out of 5 by Anonymous from okay when i got it, the disc was so scratched that i couldn't play, even after i got it resurfaced! though, i've played it before, in 2014 and i really enjoyed it.
Rated 5 out of 5 by Smitdagg2 from Great game I bought the game for my nephew and he thoroughly enjoys it. 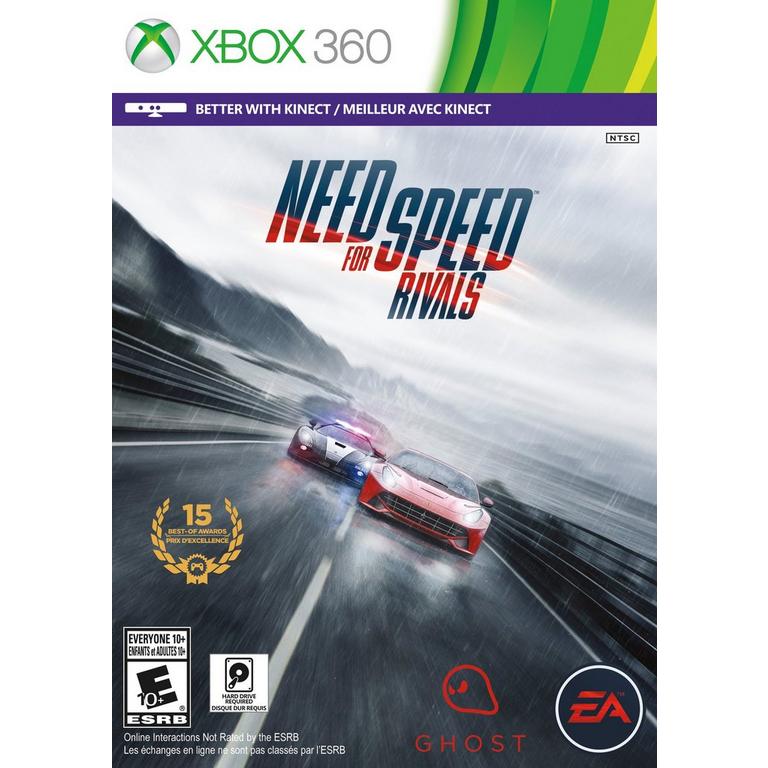