Blood
Suggestive Themes
Violence
Mortal Kombat vs DC Universe is rated 4.1 out of 5 by 256.

Blood
Suggestive Themes
Violence
Mortal Kombat vs DC Universe is rated 4.1 out of 5 by 256.
For the first time ever Scorpion, Sub-Zero and the Mortal Kombat warriors battle with Batman Read More
Please Choose An Option

Get it this way:
Free pick up at store with delivery@door
at
No availability within 15 miles. .
Change Store
Free Standard Shipping $35+
DELIVER TODAY
(FREE on orders > $75!)
Learn more
Deliver to
Verify Address Change
Please provide your address to verify you are within our delivery area.
Select Condition For Availability
Buy Together
For the first time ever Scorpion, Sub-Zero and the Mortal Kombat warriors battle with Batman, Superman and other popular DC Universe Super Heroes. Choose your side and challenge your opponents with a new fighting system including Freefall Kombat and Klose Kombat along with dynamic multi-tiered environments. Plus, pick your favorite character from MK or DCU and pursue a fighting adventure in the new single player mode with an intertwined storyline and two unique perspectives.
Today Midway announced the complete cast of characters in the epic fighter, Mortal Kombat vs DC Universe. Rounding out the powerhouse line-up are the final villains Shao Kahn, Darkseid, Baraka and Lex Luthor. Gaming enthusiasts and comic-book fans alike be warned!

Midway Games Inc. (NYSE: MWY), a leading interactive entertainment software publisher and developer, today announced Mortal Kombat® vs. DC Universe, licensed by Warner Bros. Interactive Entertainment. When a cataclysmic force merges conquerors from two universes, conflict is inevitable. Kombat forces friends to fight, worlds to collide, and unlikely alliances to be forged. In order to save all they know, the heroes and villains of Mortal Kombat must wage war against the combined might of the DC Universe (DCU). How can either side prevail when rage blinds them to the dark threat poised to destroy them all?

For the first time ever Scorpion, Sub Zero and the warriors from Midway's billion-dollar fighting franchise face off against Batman, Superman and other iconic and powerful DC Super Heroes, featuring signature attacks for both sides and a unique and intertwining storyline, written as a collaboration between the Mortal Kombat creative team and top comic scribes Jimmy Palmiotti (Painkiller Jane, Marvel Nights, Jonah Hex, 21 Down) and Justin Gray (Batman: Legends of the Dark Knight, JLA Classified, Punisher Red X-Mas, The Resistance) MK vs. DCU is slated to ship for the PLAYSTATION®3 computer entertainment system and Xbox 360® video game and entertainment system from Microsoft in Fall 2008.

“It is a truly unique and extremely exciting effort to be teaming up with Warner Bros. Interactive Entertainment and DC Comics for the first Mortal Kombat game on next generation platforms,” said Ed Boon, co-creator and executive producer for Mortal Kombat at Midway Amusement Games. “The DC Universe characters are some of the most popular and enduring characters in the world. By combining them with the Mortal Kombat mythology, all new gameplay modes and features, plus a completely unique storyline crafted by top comic writers, players will now be able to answer the question: what would happen if Batman fought Sub Zero?”

“For the first time, players will be able to go toe to toe with DC and MK characters in both arena and story mode,” said John Nee, Senior Vice President, Business Development for DC Comics. “We've worked very closely with Midway to bring an authentic DCU flavor to their Kombat and the result features our characters like they've never been seen before.”

Can this game be played on a xbox one S??

Asked by: Zinger4life
Xbox &nbsp;360 Can be played on Xbox one
Answered by: Hiuiiiiiiiiiiiii bye

Is it scratched up

Asked by: Victor 101
well rarely but you have to check its condition so just check for a very big scrach my mom says that but it might not
Answered by: Jacobthegamer

What does the LIVE mean on the top right side of the box? Only play LIVE??

Asked by: KKAASS
no, it means that you can play online witch its optional
Answered by: y6y7yu

Does it work on xbox1

Asked by: Bmmm
Yes
Answered by: Mega234
Mortal Kombat vs DC Universe is rated 4.1 out of 5 by 256.
Rated 5 out of 5 by Anonymous from Love it Excellent service all the time I order from gamestop regularly never had any issues
Rated 4 out of 5 by Anonymous from Great game! 4outof 5= not backwards compatible yet I like the game and previously had it on my 360. It's my favorite Mortal Kombat game of all time to date! I bought this without checking online to see if it is backwards compatible on xboxone and it sadly isn't! That is the reason I gave it 4 stars and not 5.
Rated 5 out of 5 by Jase Young from Love it I'm been a Mortal Kombat fan since junior high in the 90s. I have to say is by best Mortal Kombat vs ds fighting I ever played
Rated 5 out of 5 by Sundee from MK vs DC Universe Game is for mature ages or pre-teen. My daughter enjoys every character and is fun.
Rated 5 out of 5 by Tdljm143 from Fun game Love it used to have it a few years back on xbox 360 when it first came out
Rated 5 out of 5 by notofman from amazing but could have been perfection batman vs scorpion nothing better. the game has a slight difference in style after Armageddon the fatalities are pretty much the first generation snes version with no real death little sprits of goo blood and highly censored fatalities. the story was fun the game is solid but not work a purchase if you enjoy the violence and death. more for comic fans looking for something capcom vs dc
Rated 3 out of 5 by Anonymous9999 from It’s ok Doesn’t have many characters or many fighting affects.
Rated 5 out of 5 by Cody777 from Great game, great price. I actually bought the game for my roommate. Both me and her love the Mortal Kombat games, and we both played this when we were younger. It's still as fun as ever, has great graphics, an interesting story, and plenty of fighters from both franchises. I purchased this quality game for a reasonable price. All in all, a great experience. 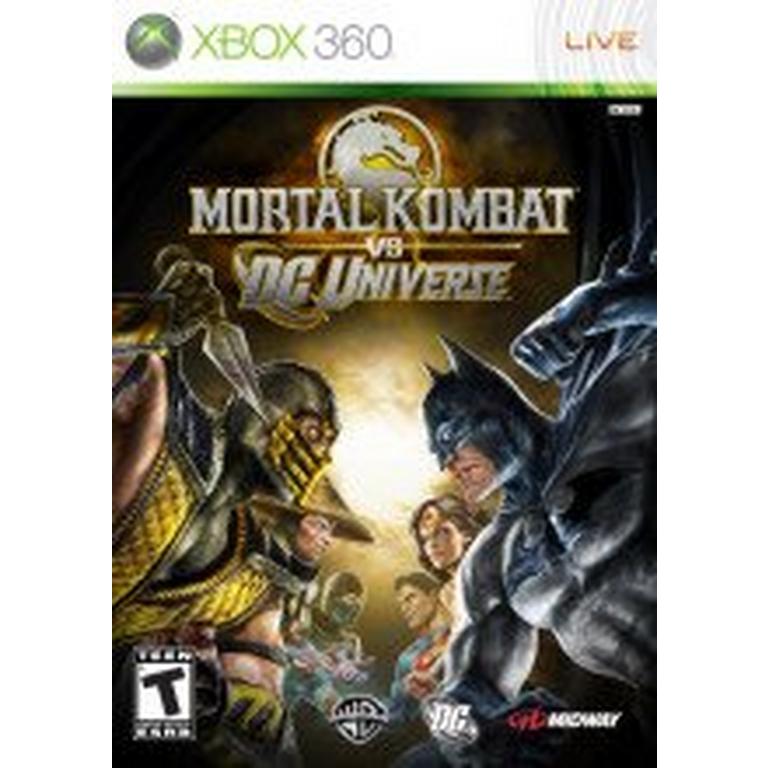