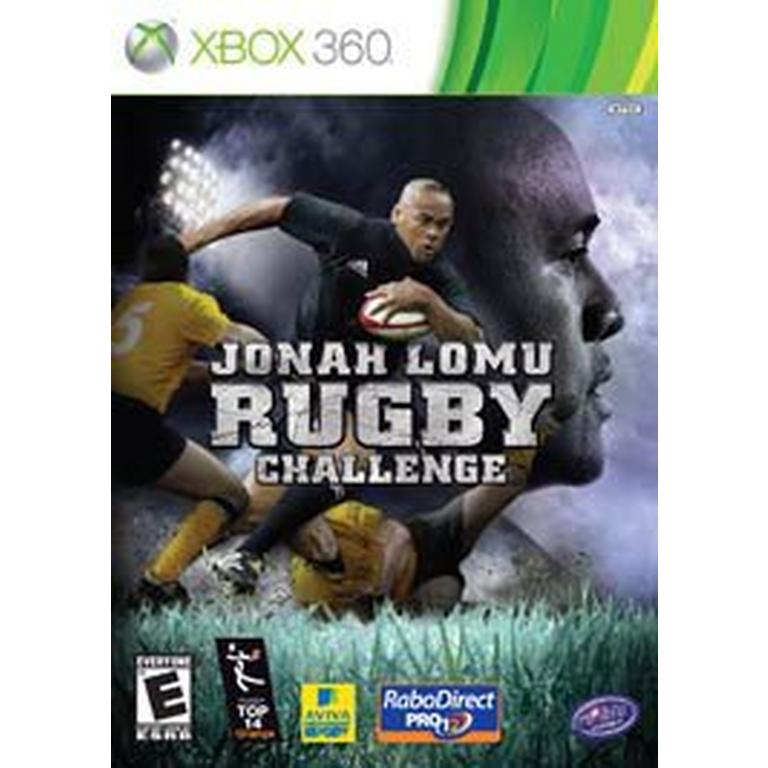 Crouch! Touch! Pause! Engage!Jonah Lomu Rugby Challenge for Xbox 360 is the new title by award winning New Zealand based games developer Sidhe. Rugby Challenge features Jonah Lomu, long regarded as the first true global superstar of rugby union. Experience the emotion and adrenaline of world class rugby union from club rugby through to international competition. Exclusively featuring the All Blacks and Wallabies, the game also includes 91 teams for intense 4 versus 4 multiplayer competitions. Create your own players and teams including an all Jonah Lomu squad. All the passion, all the power, all the precision of the world's best rugby players comes together in the most advanced rugby game ever made.
More Details Less Details

Developed using extensive input from one of the greatest rugby players of all time,Jonah Lomu Rugby Challenge showcases 93 teams and provides 31 stadiums for players to score tries in. Experience the emotion and adrenaline of world-class rugby union from club rugby through to international competition. With a wealth of single-player modes and customization options, plus clashes via the Xbox LIVE online entertainment network,Jonah Lomu Rugby Challenge offers gamers an unrivalled Xbox 360 rugby experience.

No other game provides the means for you to join the scrum as your favorite All Black or Wallaby. Additional team and competition licenses include the USA Eagles, Bledisloe Cup Series, AU/NZ Super Rugby teams, Aviva Premiership Rugby, TOP 14 Orange, RaboDirect PRO12, ITM Cup, Ranfurly Shield and more.

When renowned New Zealand game developer, Sidhe, set out to create the first Jonah Lomu game since 1997, they did so in conjunction with Jonah himself. Trading days on the pitch wearing a uniform for days in the studio wearing a motion-capture suit, Jonah provides gamers with the chance to play as one of the most dominant forces to ever compete in the sport. You can even create your own dream team and choose to have Jonah as all 15 members of your squad.

Pit your rugby skills against online foes in multiplayer matches featuring support for up to 4 versus 4 via Xbox LIVE. With leaderboards which rank your overall point total and also your reliability in completing online matches, you'll always know just how you stack up against fellow rugby gamers across the globe.

Training mode helps those new to the sport easily get up to speed with essential rugby rules, moves and terms, while career mode allows you to control your own team's destiny over the course of 13 action-packed seasons. Jump into a quick single match, or battle in a host of extended competitions like the World Rugby Championship and ITM Cup.

Extensive customization options provide total control over player accessories, appearance and fitness; team emblems, names and home stadiums; competition formats, trophies and point structures, and more. With an in-depth system to adjust nearly every aspect of the game, the possibilities for customization are limitless.

Jonah Lomu Rugby Challenge is rated 4.0 out of 5 by 10.
Rated 5 out of 5 by Anonymous from This game is the best, The best RUGBY By FAR, wow! Well the rugby challenge is a pretty sweet game.I would recomend to a Friend.If anything this is the best.
Rated 4 out of 5 by Kiwi712 from Best rugby game right now, but with some flaws Overall, I think that Rugby Challenge is currently the best rugby game there is to buy. It has a vast variety of tournaments to choose to play in and it has licensing to an enormous amount of clubs. Although internationally it only has licensing to New Zealand, Australia, and USA which is a let down but due to the player customization you are able to go into the customization screen and rename the players on the national teams to their real names. I can't be bothered to rename them all so I just renamed my favorite players from certain countries. The graphics are nice and the commentary is good but it could be better. The commentators are alright but it feels as if they have the commentation abilities of that of 2005 sports games. My biggest con about this game however is the actual gameplay. Rucks, line outs, scrums, and the kicking is all done in a very creative and nice way but the passing is very wierd at points. Your opponents are able to go on massive offloading sprees with no way to intercept the ball. This can become very frustrating. The user passing also takes a lot of time and practice to master because you will often times find your pass going to ground when it seemed like such an easy pass. I would say that you should only get this game if you are desperate for a rugby video game. If not, don't waste your money.
Rated 4 out of 5 by Gary from The Best Rugby Game It is slim pickings for us rugby fans. I have to say this game is far superior to any ofther rugby game I have played. The controls are great. The only things I would change is that I would add a mode where you control one player's career and also some of the animations are buggy. Besides that, this game will keep you busy for days. GO USA!
Rated 1 out of 5 by bosshoss2012 from awful I saw all reviews before me were all 10's so i assumed the game would be good. Oh boy was I wrong. First of all there is no creativity. I thought there would be a lot of features because there is a lot involved in rugby. Wrong! I played 5 games an immediatly threw the game in the trash because I did not feel it was worth returning with the chance of someone else buying it. All you can really do is pass and kick. Thats it. The movement is downright awful. Pretty much everything that could go wrong went wrong!!!
Rated 5 out of 5 by LBrugbyluva321 from Best Rugby game ever! I highly recommend getting this game if you dont hav it. it has fantastic grafics, the controlls are great, it has all the worlds biggest rugby tournaments it has a place were u create ur own character ,team , and tournaments. i love this, in fact i am playing it right now!!!!!!!!!!!!!!!!!!!!!!!!!!!!!!!!!!!!!!!!!!!! i had the world cup 2011 game and it was fun but not nearly as fun as this.
Rated 5 out of 5 by JermJerm from SO much better than Rugby World Cup 2011 I bought both RWC'11 and JLRC. RC makes RWC look like an arcade game. You can tell the developers of RC are big fans of rugby and put a lot of effort and love into this game. So many details, stunning graphics. The only thing missing are national licenses. I mean you get All Blacks, Wallabies and Eagles, plus you can play national teams, but it's awkward hearing the commentators say the fake names for other national team players. But really - those minor details pale in comparison to the awesomeness of this game.
Rated 5 out of 5 by Sketcher1 from Sweeeeeeeeeet! I am absolutely thrilled that I waited and bought this game as opposed to Rugby World Cup 2011. This game is much better, has way more teams and is a lot deeper than I thought it would be. I will be playing this for quite some time. Rugby WC 2011 who?
Rated 5 out of 5 by StonyBrookFan from AWSOME GAME Finally after a long wait, a rugby game worth playing. BEST RUGBY GAME YET!!!

Is this game cross compatible with xbox one?