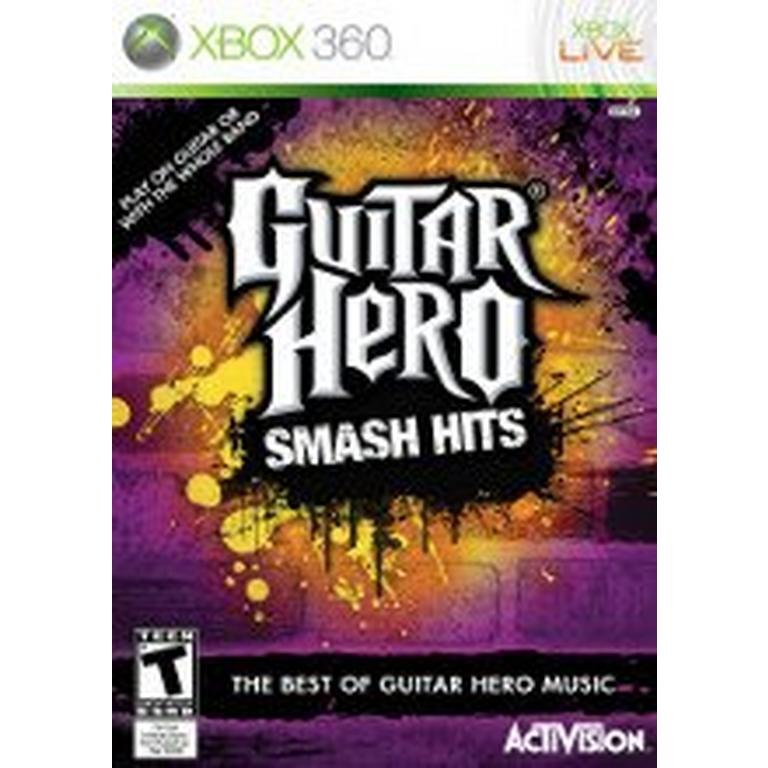 Turn down the lights, crank up the amps and prepare to command center stage with some of the most famous AND infamous tracks from Guitar Hero®, Guitar Hero® II, Guitar Hero® Encore: Rocks the 80s and Guitar Hero® III: Legends of Rock. Step into the spotlight in the most epic, full band jam session to-date -- Guitar Hero® Smash Hits.
More Details Less Details

A Setlist Featuring the Smash Hits of Guitar Hero

Guitar Hero Smash Hits features the most memorable songs from Guitar Hero games together in one epic setlist, comprised of all master recordings including, “Them Bones” by Alice in Chains, Queen's “Killer Queen,” “Nothin' But A Good Time” by Poison, Rage Against The Machine's “Killing in the Name,” “I Wanna Rock” by Twisted Sister, Joan Jett and The Blackhearts's “I Love Rock N Roll,” Heart's “Barracuda” and Guitar Hero III favorite Dragonforce's “Through the Fire and Flames.”

I'm With the Band

Up to 4 players can join together and rock locally, or battle other bands online with up to 8 players. Guitar Hero Smash Hits features the Music Studio, GHTunesSM* and the Rock Star Creator first made famous in Guitar Hero® World Tour. Create your own hits in Music Studio, share them online with GHTunesSM and watch your created superstar shred and drum to your soon-to-be breakout hit. The game also adds another dimension of difficulty with the drum kit controller's double kick-pedal “Expert+” difficulty level first seen in Guitar Hero® Metallica®.

Guitar Hero Smash Hits is rated 4.0 out of 5 by 18.
Rated 3 out of 5 by Samkat from . The playlist is not even close to the best. The rockers list isn't complete either. Seems like this game was either rushed or the developers just got lazy.
Rated 5 out of 5 by Shawn McCombs from Good game Good game but GameStop needs to keep selling older games because some games are still currently online it would bring more revenue and more profit.
Rated 5 out of 5 by The Plant Commander from Great for fans of GH Best Career mode of the series since GH3, and also one of the better soundtracks in the series. Significantly tougher than most GH titles, so be warned. However, for dedicated players, this is a must-have.
Rated 4 out of 5 by Muddogg from We bought this a couple of months ago it's a great game but additional downloads are no longer available
Rated 5 out of 5 by Sue1224 from Great songs I bought this a few weeks back and I love that it has all the songs I loved from other ganes
Rated 4 out of 5 by Metalfan666 from Good for a compilation game I liked this game until I found out that most of these are on Rock Band and that the gameplay of Rock Band is 10x better! I think they should choose better songs. Examples: Iron Maiden's Wrathchild, The Number of The Beast; Black Sabbath's War Pigs, Paranoid, Iron Man; Judas Priest's You've Got Another Thing Comin' among others. I was disappointed in the career mode this game I would only play this game in Quickplay or in Band mode.
Rated 4 out of 5 by bman258 from guitar hero does it again! second best guitar hero in my opinion. ill keep it short and sweet. graphics arent bad but need more work, the songs are amazing if you enjoyed the past games like the first second third and so on, it is addicting since you can play drums guitar bass and sing to the best songs! its easy yet its hard since you must beat every song on the game to beat the career mode. the career mode is beast except for that part. come on buy it only 9 dollars and its worth every penny!
Rated 4 out of 5 by CloseCMBT from Good great songs, but poor graphics and no song support

Does this come with a guitar?

So what all is included in the box?

Guitar Hero: Smash Hits
Xbox 360
Buy a New or Pre-Owned Xbox One, PlayStation 4, Xbox 360, or PlayStation 3 Console, get 5 compatible Pre-Owned Games (valued $19.99 or less) for $50! Cannot be combined with any other offer. Add items to cart for discount.