Blood and Gore
Intense Violence
Nudity
Sexual Content
Dantes Inferno is rated 4.4 out of 5 by 150.

Blood and Gore
Intense Violence
Nudity
Sexual Content
Dantes Inferno is rated 4.4 out of 5 by 150.
An abducted soul. A lifetime of sins. A journey to the depths of despair. Based on the immen Read More
Please Choose An Option

Get it this way:
Free pick up at store with delivery@door
at
Out of Stock at .
Check other stores
Everyday Free Shipping $35+
DELIVER TODAY NEXT DAY
($8.99 FEE PER ORDER)
Learn more
Deliver to
Verify Address Change
Please provide your address to verify you are within our delivery area.
Select Condition For Availability
Buy Together
An abducted soul. A lifetime of sins. A journey to the depths of despair. Based on the immensely influential classic poem, Dante's Inferno takes you on an epic quest of vengeance and redemption through the Nine Circles of Hell. You are Dante, a veteran of the Crusades who must chase his beloved Beatrice and try to free her soul from Lucifer's grasp. As your pursuit takes you deeper into the pits of Hell, you must battle ever more fierce and hideous monsters—while also facing your own sins, a dark family past, and your unforgivable war crimes.

EA's Dante's Inferno will take gamers to the western world's most definitive view of the afterlife as created in the 13th century by the Italian poet Dante Alighieri in part one of his epic classic, “The Divine Comedy.” The game is shipping in 2010 for the PLAYSTATION 3, Xbox 360 and the PSP. EA's Dante's Inferno tells an adapted story that focuses on delivering a blockbuster 3rd person action game experience while bringing Alighieri's depiction of Hell to the medium. Players assume the role of Dante, who descends into Hell after returning home to find his beloved Beatrice murdered, with Lucifer seducing her soul into the underworld. Dante sets out on a rescue mission to save Beatrice, but he soon realizes he is also in Hell to face his own demons and ultimately to redeem himself.

Players will take Dante through nine unique circles of Hell as mapped out and described by Alighieri: limbo, lust, gluttony, greed, anger, heresy, violence, fraud and treachery. Each circle will showcase its own distinct look, with demons, monsters, damned and geography that are crafted straight from the poem's vivid descriptions.

To take down the demons of Hell, Dante is outfitted with two primary weapons: the Scythe he takes from Death and the Holy Cross given to him by Beatrice, which has spiritual powers that will help Dante collect souls and spells from the creatures he defeats on his journey. The game also features a deep upgrade system so gamers can customize their abilities to their specific gameplay style, something they'll need as Dante comes face to face with Hell's fiercest beasts and bosses. If successful, Dante will be able to tame certain beasts, exacting their will and turning Hell's punishments back on itself.

Built on the same technology as the award-winning Dead Space™, Dante's Inferno will deliver a fast, fluid and responsive combat experience running at 60 frames per second, a must-have for the action adventure genre. The game is being built by Visceral Games™, with the same attention to polish the studio has become known for with Dead Space.

Asked by: Jackiel12
Thank you for your question! No, it does not look like this game is backwards compatible. https://www.xbox.com/en-US/xbox-one/backward-compatibility/available-games
Answered by: GameStopTeam23

Can you play this on Xbox one? 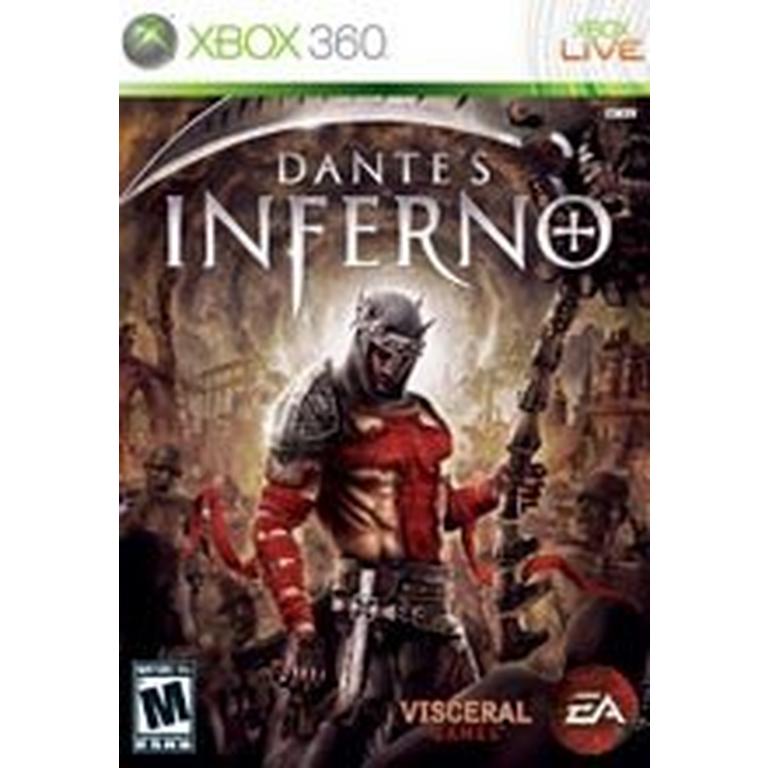