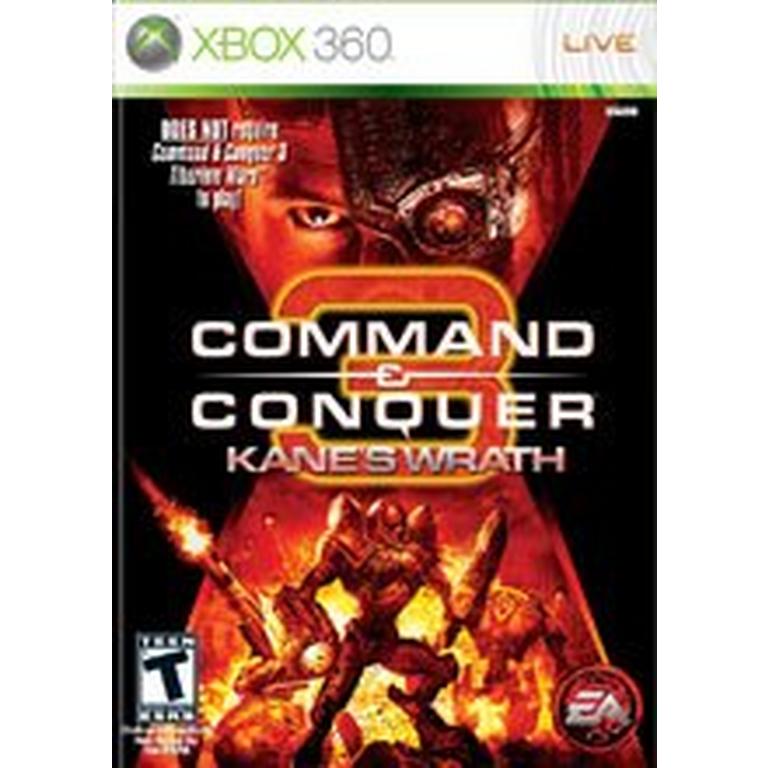 Command & Conquer 3: Kane's Wrath includes all the units, structures, and superpowers from Command & Conquer 3 Tiberium Wars, allowing you to command more than 100 units and structures. Choose from three classic C&C factions – The Brotherhood of Nod, the Global Defense Initiative, and the enigmatic alien Scrin – or choose from one of six all-new sub-factions, each with unique units and abilities. In addition, all-new game-changing Epic Units give you another weapon in your arsenal to wreak havoc on opponents and turn the tide of war.

For the most skilled players, Kane's Challenge is an Xbox 360-exclusive game mode that provides the ultimate C&C test. Choose a side and enter the gauntlet against nine of the fiercest armies the world has ever seen. You can now nuke your friends in the name of Kane across 50 maps in all-new multiplayer action.

Waging epic warfare on the Xbox 360 has never been easier as you execute complex orders from anywhere on the battlefield with the all-new Command Stick. Designed specifically for the Xbox 360, the Command Stick takes RTS controls to a new level, allowing even the most novice players to build, deploy, and attack with great ease.

Your army awaits your command.

Command and Conquer 3 Kanes Wrath is rated 4.7 out of 5 by 17.
Rated 5 out of 5 by HNA Hockey from It's 2018, and still playing! Title is 10 years old, still a favorite. Skirmish mode = different game every time.
Rated 5 out of 5 by BooBoo1997 from Greatest strategy game I've ever played. If you're a big fan of strategy games than you'll like this.
Rated 5 out of 5 by TheOutlaw84 from the best strategy game i played this game im getting addicted to this game this game is better than any xbox 360 strategy
Rated 5 out of 5 by cowardlylionx from Probably almost the best RTS game ever It is probably the best RTS game ever. it si a really awsome game i would recamend to all RTs players
Rated 5 out of 5 by DaGames from Very Good Game If you like halo wars, then you will like this. Allows you to choose from a variety of units and freedom of where to go and what to do.
Rated 5 out of 5 by Qpan from great game This is by far the best RTS series for the xbox 360. Starting back from tiberium wars this game has been great. The controls are very smooth and easy to learn and a big improvement from Command and Conquer 3. I have been playing RTS games for many years on the original console and my PC. There are 3 main factions and 9 total factions. There are many things to keep you occupied in single player mode. There is a decent story mode and a kanes challenge mode which allows you to play wwith all the factions to get used to them. The only problem with this game is that noone really plays it anymore. I think it could be because of halo wars and supreme commander 2 but i dont know. The only shady thing I found in the game is the same as command and conquer 3. The mothership glitch..
Rated 4 out of 5 by xandy92 from A great and easy way to pick up and play I actually went over to my friends house. I saw C&C: Kane's wrath. At first, I watched him play the game. At first glance, it seems way too complicated for the Xbox360. So then I tried it. It was awesome! This game had amazing graphics, the animation reminds you of Halo Wars, and the AI was very smart. There is only one resource in the game (tiberium), which makes it very easy to focus on your military instead of managing too many resources. The next day, I went and bought the game. The achievements are easy to get but are fun to do.Here is what I rate on this game:pros:-very easy to pick up-AI changes to your playing style-easy but fun Achievementscons:-Sub-factions in the game are basically the same-Story sucks-Online is so-soOverall, you need to buy this game!
Rated 5 out of 5 by T87 from Love it: keep the good C&C times rolling Before you ask why I would give the game a 10 but say the AI and challenge are fives, it is because it depends on what difficulty you play the AI on that gives it the challenge. If you paly it on easy the AI is crap and there is no challenge, but on hard the AI and challenge is nice. I love the C&C series and this one is an amazing expansion for an amazing game. The campaign in this is a little dry, but the online is great and there are many things you could do in this game like Kane's challenge. Plus the addition of sub factions was a nice touch (even Scrin did not need them and a group of the sub-faction the Black Hand's avitars that have the upgrade flame can own any army that iis not air based) but other than that this is a awsome game. 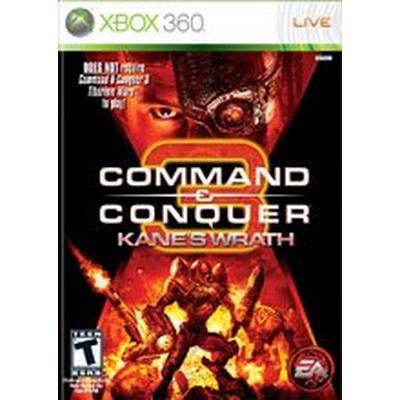