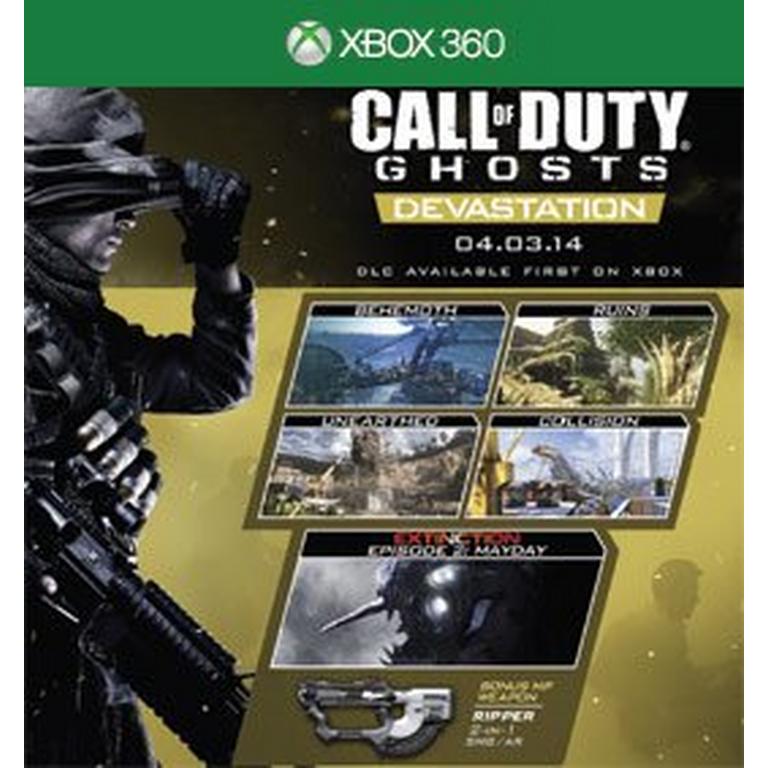 Situated on a massive excavation vehicle, Behemoth is a narrow multi-level map, giving players flanking opportunities with danger around every corner. Complete the map's Field Order and take control of an attack helicopter able to rain down destruction from above with devastating grenade launchers.

A mountaintop Mayan ruin overrun by the jungle, Ruins' skyline is dominated by an ominous volcano on the brink of eruption. This map blends the verticality of a dominant temple with tight subterranean sections.

Inspired by Dome, the fan-favorite map from Call of Duty®: Modern Warfare® 3, Unearthed drops players in the heart of an alien dig site. This small map asks players to navigate through Cryptid artifacts, a mix of high-tech HAZMAT facilities, scientific equipment and vehicles. Players skilled enough to complete Unearthed's unique Field Order will be able to unleash three Cryptid alien creatures, delivering an explosive end to their foes.

The mangled remains of cargo ship crashed into a New York bridge, ripe with burnt out vehicles and shipping containers strewn across the deck, this map provides the ideal theatre for close-quarters combat. Unlock the map's unique Killstreak by completing the Field Order, and use the full arsenal of an A-10 Warthog aircraft to strafe the full length of the map.

The Ripper is the ideal weapon companion for DEVASTATION's mix of multiplayer maps. Providing players with two different configurations: medium to short-range capability as a Sub Machine-Gun (SMG), and medium to long-range as an Assault Rifle (AR). This unique 2-in-1 weapon has the ability to switch from SMG to AR and back again on the fly in the midst of battle, at the touch of a button, giving maximum flexibility to adjust to a variety of map types and tactics.
NOTE: Call of Duty: Ghosts DLC Season Pass holders on other platforms will also get early access to the Ripper, with that timing to be confirmed at a later date.

In Episode 2: Mayday, the Quick Reaction Force team is sent in to investigate a high-tech ghost ship adrift in the South Pacific. To deal with the insidious wall-crawling “Seeder” and skyscraper-sized monstrosity known as the “Kraken,” your team will need new tactics and new weapons.

Call of Duty Ghosts Devastation Map Pack is rated 3.7 out of 5 by 3.
Rated 4 out of 5 by Cool117 from Really fun Really fun to play and nice new extension to the extinction story.
Rated 2 out of 5 by JGamingS from Not very good at all. I did love this chapter of the Extinction story, but found the MP maps to be terrible, and boring and tasteless, as with Onslaught, I found this to be a waste of my season pass.
Rated 5 out of 5 by MARIOFAN25 from THIS IS WHAT GHOSTS NEEDS The devastation map pack for call of duty ghosts is one of the finest map packs in call of duty history. there are 4 new maps a new extinction map and the new DLC weapon the ripper. Ruins is a medium sized map in Mexico. There are lots of corners to watch and lines of sight to look over and observe the map. there are several dark areas but they are short. There are two field order rewards for this map and they are the predator and the volcano. the predator runs fast and can slice and has a rocket launcher. when he goes down, he pulls the ultimate dead mans hand and launches a KEM before he dies. the second causes the volcano to erupt and kill enemy players. Behemoth is a smaller sized map located in Columbia and is on a massive drill. this map is full of flanking routes and close quarter fights. SMG and shot guns are the way to go. the field order for this map involves a chopper gunner to come down and kill enemy players. Collision is a medium sized map located in New York City and it is on a bridge where a large cargo ship has collided with it leaving many destroyed cars and new routes to flank the enemy. all types of weapons can work well on this map. Unearthed is the final map and is my favorite. Unearthed is an alien dig site inspired from the fan favorite dome from MW3. This map is small and has many routes to go and assault the enemy. the field order brings in 3 aliens to explode near enemies. The ripper is quite possibly the most broken gun in ghosts. sporting 900 RPM in SMG mode with great iron sights, and the ability to change to an AR on the go makes the ripper a go to gun for almost any map. so overall devastation is a great pack and is the best way to spice up your ghosts experience. 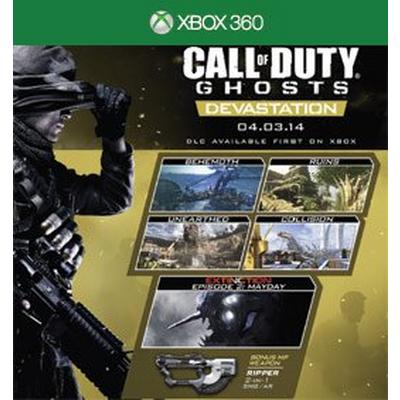