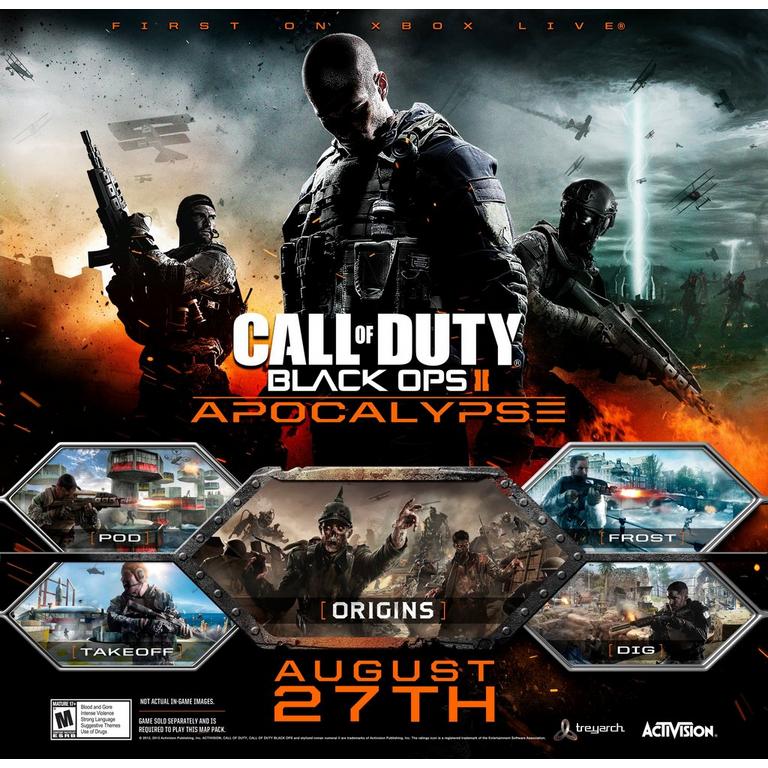 With Call of Duty: Black Ops II Apocalypse, Treyarch reveals Origins, the most horrifying and imaginative Zombies experience yet. Players will be deployed to Dieselpunk-stylized World War I-era France where they will encounter the return of the four original heroes from the very first Zombies map, as well as hordes of zombies that have overrun trenches and fields, as well as the ruins of a mysterious and ancient location.

Unleashed after the Germans unearthed the mysterious new “Element 115,” this next chapter in the Zombies legacy will explore the saga's origins as players reunite with an unlikely band of soldiers that come together to defeat the greatest evil the world has ever seen, using a period-specific arsenal that includes Wonder Weapons that harness supernatural powers, a diesel-drone and Mark IV tank, as well a new perk machine and power-ups – and that's just the start. Players will need all the help they can get to succeed in defeating the undead, as well as evading an unprecedented 1,000-foot tall robot abomination. In this stylized undead adventure, they'll need every advantage if they have any hope of surviving one of Treyarch's deepest Zombies experiences to date.

Call of Duty Black Ops II Apocalypse Map Pack is rated 4.5 out of 5 by 4.
Rated 5 out of 5 by El chapo from Just amazing Ive been playing bo2 for as ling as i can remember and rememver all the great times ive had with it but tbh the game wouldnt be the same without these maps because the maps were made so well that it kept me wanting to play so i highly recommend after many years
Rated 5 out of 5 by Deathray627 from This dlc is AWESOME I recommend you get this DLC. Personally, Origins is the best out of the DLC to me and other people.
Rated 5 out of 5 by DCEPIC25 from EPIC I bought this for me to play origins. Origins is great the robots zombies characters all lovely. I didn't really care about the multiplayer maps but they're great too
Rated 3 out of 5 by Quapaw from The best maps!! I've recently played the zombie map origins with a friend and I have to say the map itself was accelerating, I think this map will have a lot of people in awe in how outstanding it is. I'm going to buy the download with the multiplayer maps and see how good the rest of the maps are!

What maps come with this DLC pack?

Asked by: rdelvento
all-new Multiplayer Maps, two re-imagined fan-favorite Multiplayer classics, and an alternate-reality Dieselpunk Zombies experience that transports players to the undead-infested trenches of a World War I battlefield.
Answered by: Duldras

Asked by: Lonewolf for life
It is a digital code that you can download on you Xbox 360.
Answered by: Yacob the gamer

Hi.&nbsp; Can you please enable world wide delivery? Im in europe and I can&rsquo;t buy this dlc.&nbsp;

What zombie maps does thus come with?

Can i use this code in EU? 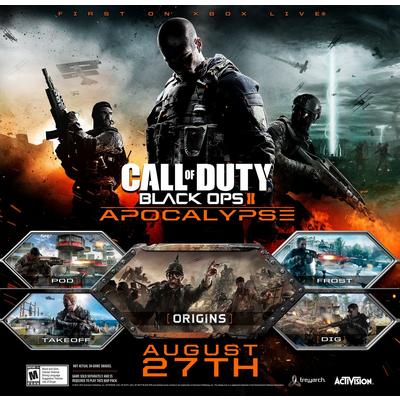