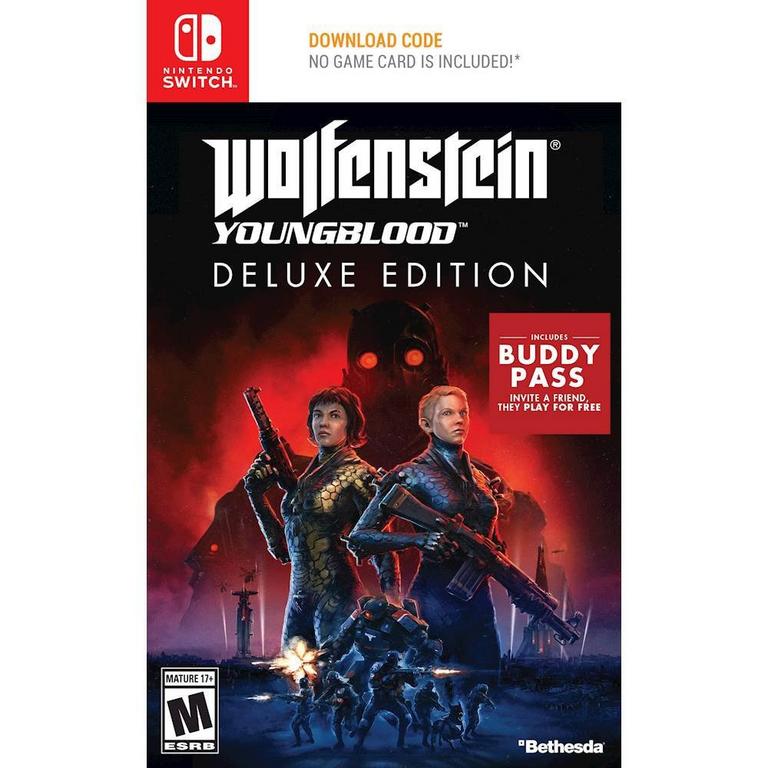 Wolfenstein(R): YoungbloodTM is a brand-new co-op adventure from award-winning studio MachineGames, developers of the critically-acclaimed Wolfenstein(R) II: The New Colossus, in partnership with Arkane Studios(R) Lyon. Play as one of BJ Blazkowicz's twin daughters and undertake a do-or-die mission to find their missing father in 1980s Paris. Wield an arsenal of new weapons, gadgets, and power armor abilities in a fight to kick Nazis out of the city of lights. No cartridge for this game. Code will be packed in box. Internet connection required.

Nineteen years after the events of Wolfenstein II, BJ Blazckowicz has disappeared after a mission into Nazi-occupied Paris. Now, after years of training from their battle-hardened father, BJ’s twin daughters, Jess and Soph Blazkowicz, are forced into action.

Team up with a friend or play alone. Level up, explore, and complete missions to unlock new abilities, weapons, gadgets, cosmetics, and more to complement your playstyle and customize your appearance.

The Deluxe Edition includes the Buddy Pass, allowing you and a friend to play the entire game together, even if they don't own the game themselves.

This edition also features the Cyborg Skin Pack, which includes:

Wolfenstein Youngblood Deluxe Edition is rated 5.0 out of 5 by 3.
Rated 5 out of 5 by blacksamu from Wolfenstein with CO-OP Fun game with great graphics and gameplay. The fact that you can invite a friend to play the game with you even if they don't own it is a great selling point. Hope they continue to bring more Wolfenstein games to the Switch.
Rated 5 out of 5 by Phantomdeath from Amazing game Honestly I think this game is a great game to get, you get a lot more upgrade/ customization options. Gameplay is smooth and graphics are good. I think that it’s awsome having a wingman at your side while killing bad guys!!! You don’t feel out numbered with another super soldier as a wingman. The gun fights are intense as ever. Message to Bethesda: keep up the good work!!! It’s a big upgrade from Wolfenstein 2 The new colossus. You guys are getting a 10/10
Rated 5 out of 5 by Mbird from Buddy Pass I personally love the idea of a "buddy pass". True it can be frustrating for the person who downloaded the trial version just to realize that they can't really play it yet but the idea is amazing for someone wanting to play with a friend who doesn't own it. I kinda hope more games will be like this =)