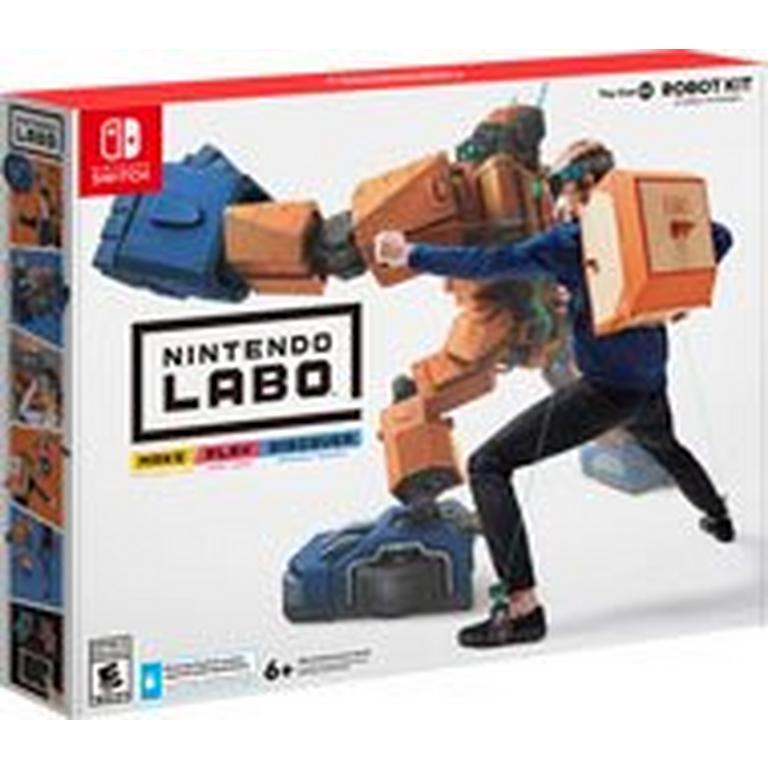 Make a Toy-Con Robot suit…to become a robot in the game! Fold engineered, pre-cut cardboard sheets by following interactive instructions and then suit up to get playing. Wreck in-game environments and beat challenges to unlock powerful abilities. Then, discover how the Toy-Con Robot comes to life with Nintendo Switch™ technology and, in Toy-Con Garage, invent new ways to play!
More Details Less Details 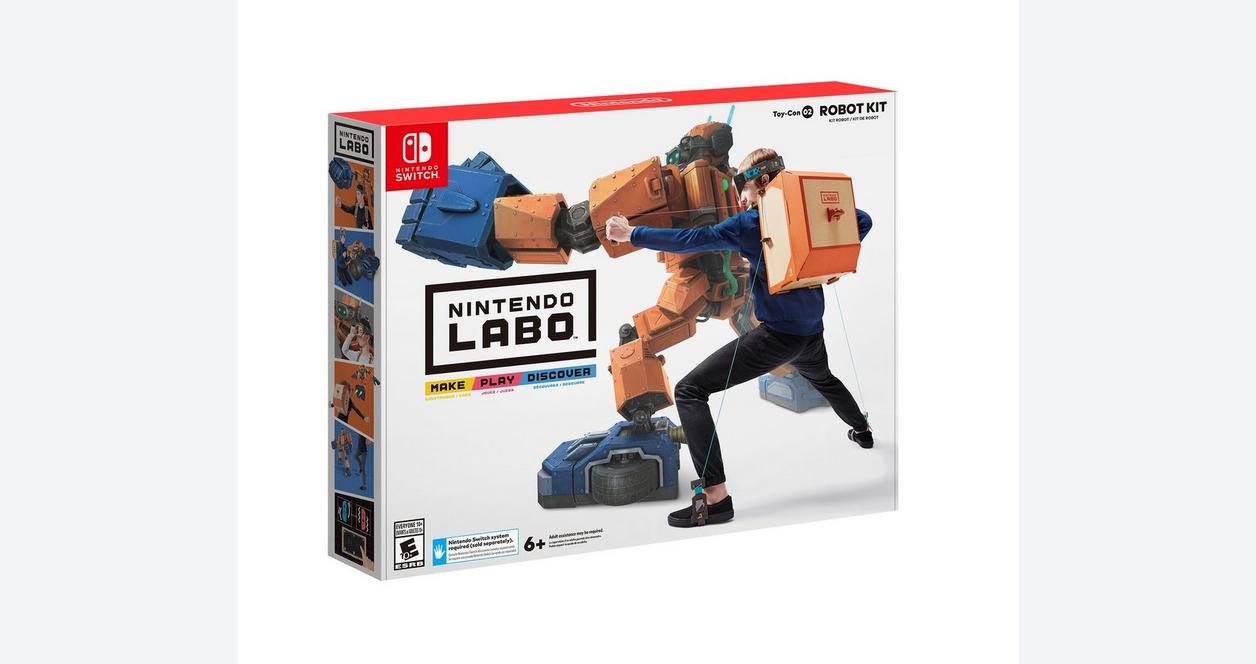 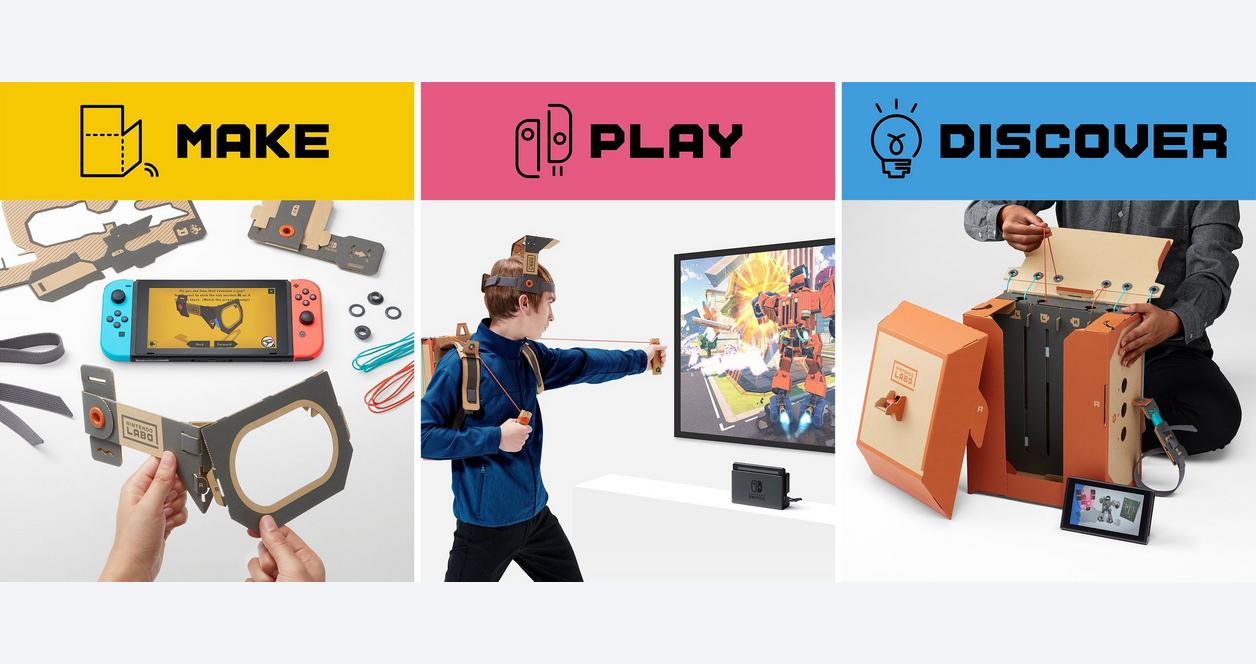 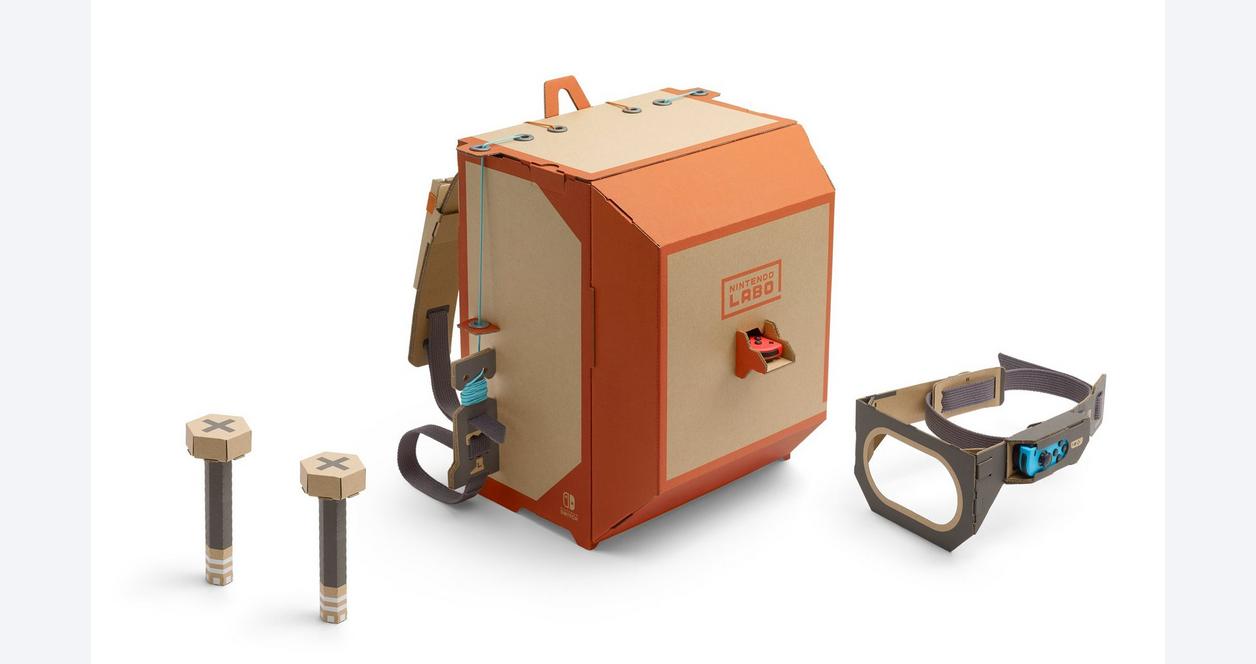 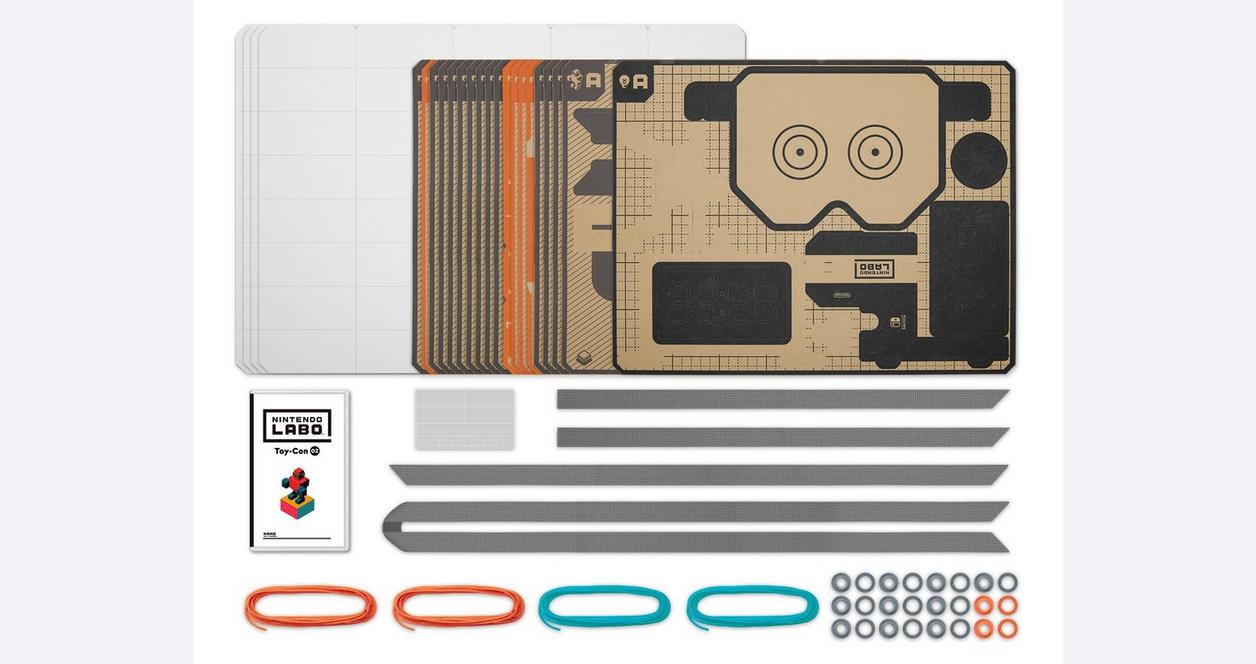 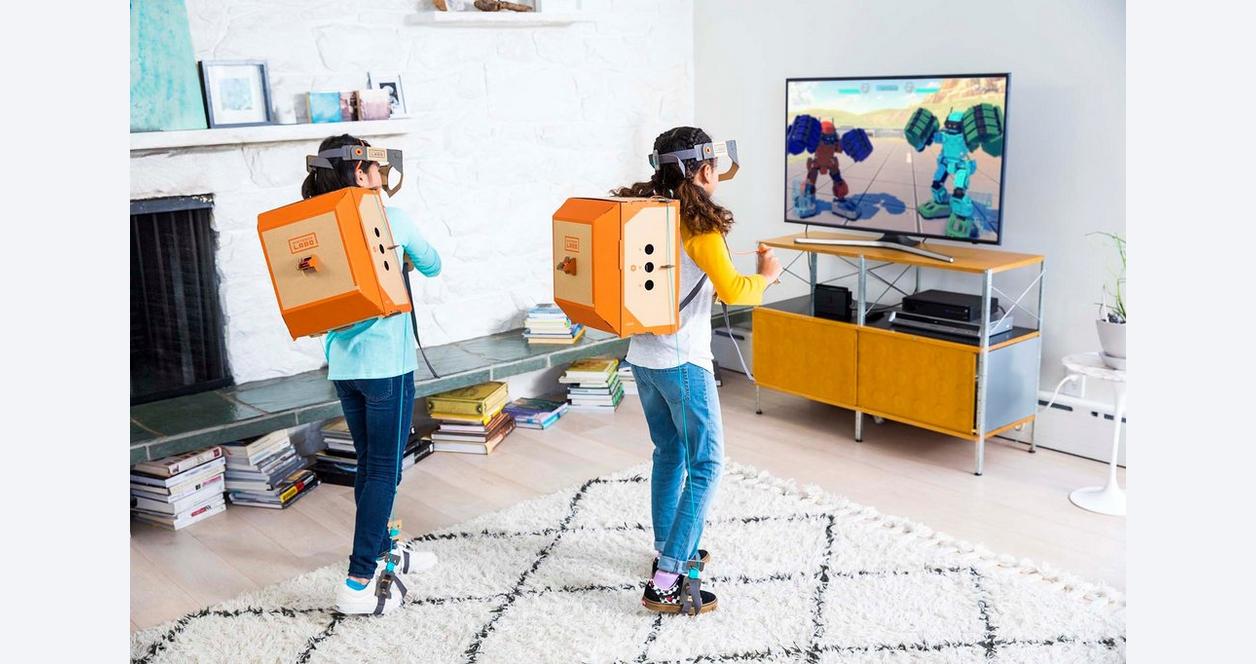 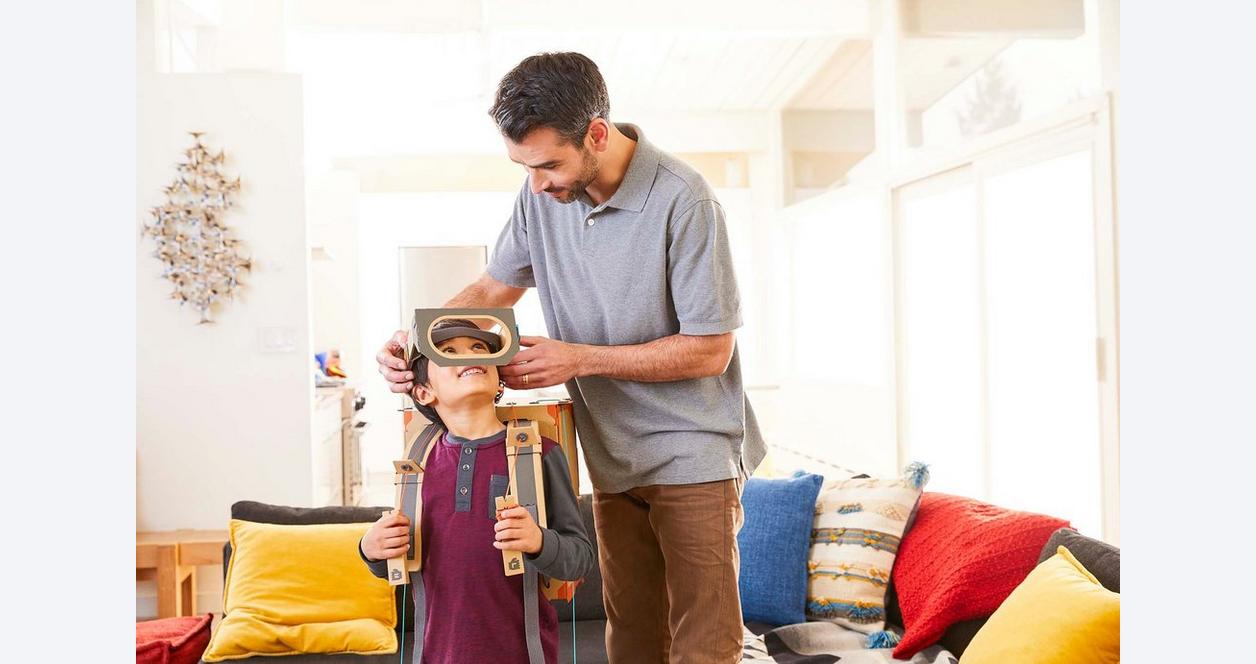 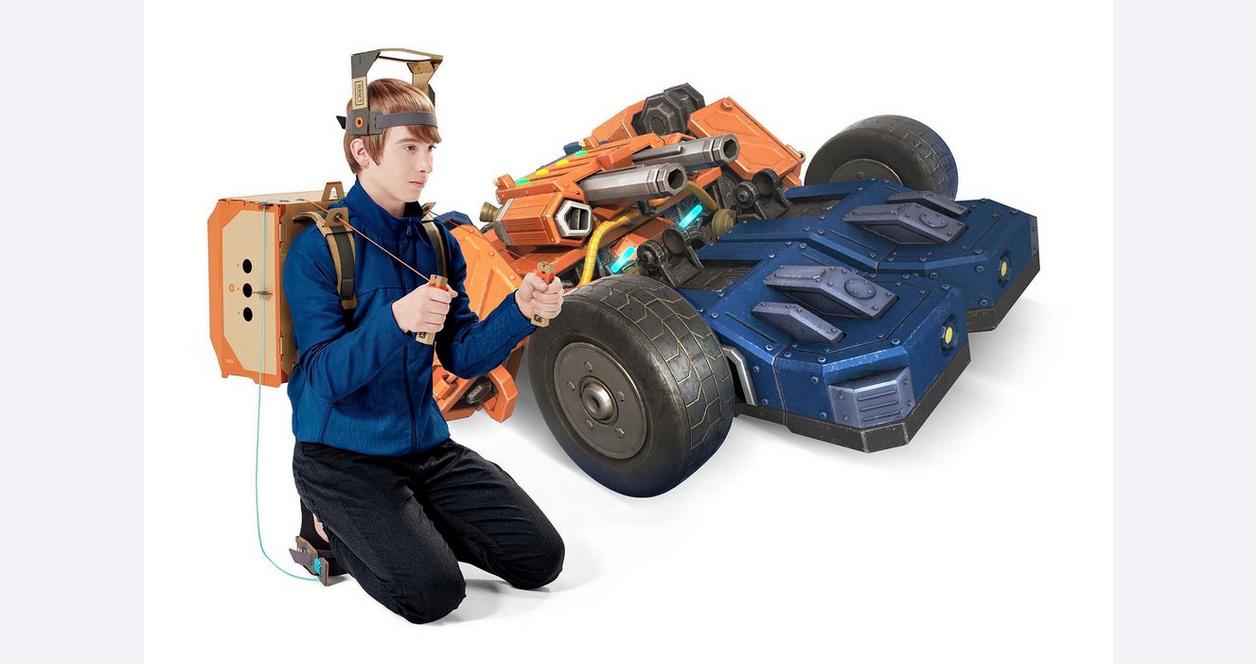 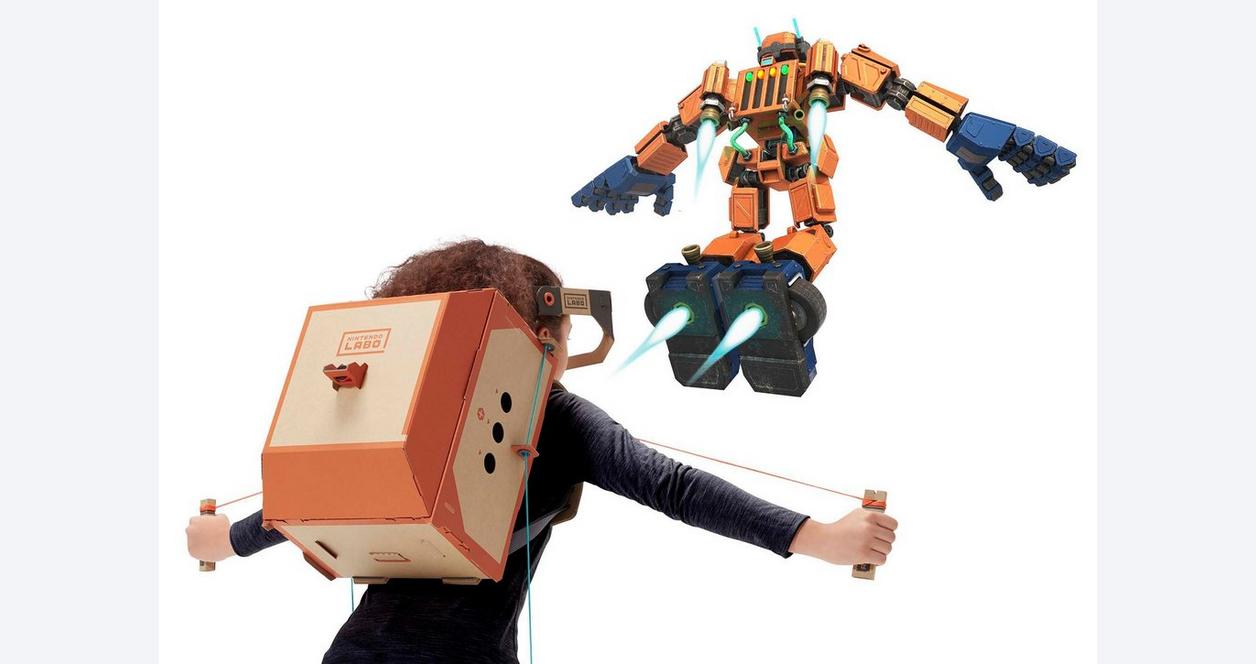 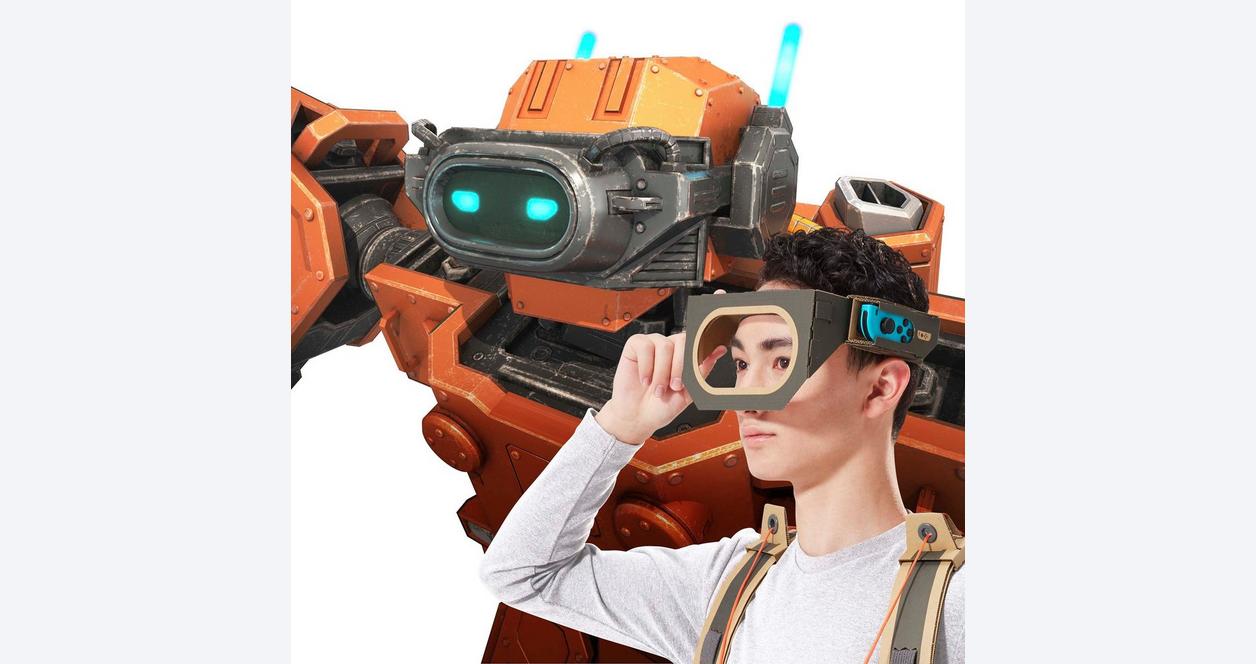 Bust out your own markers, stickers, and more to customize your Toy-Con Robot suit—or enter the Hanger to customize your in-game robot's appearance. By moving your hands and feet, you can maneuver the robot in the game, unleash your moves, or make sound effects! As you play, keep track of your robot's rank, points earned, and unlocked special abilities. Discover the mechanics behind the Toy-Con Robot and how the Nintendo Switch technology brings it to life. If you're feeling competitive, take on a friend with their own Toy-Con Robot* in a two-player battle mode on a single screen! Then go beyond in the included Toy-Con Garage mode to invent new ways to play with your Toy-Con Robot or create your very own Toy-Con projects.

Once you've experienced what it's like to Make, Play, and Discover with Nintendo Labo, use everything you've learned to create your very own projects in Toy-Con Garage! Just take digital building-blocks called “input nodes,” “middle nodes,” and “output nodes” and, with the help of this intuitive tool's visual user interface, combine them in all sorts of different ways. Change a Toy-Con creation's reactions to button presses, movements, and more! Toy-Con Garage includes handy tutorials to get you started. Experiment with your Toy-Con Robot, or craft original designs using your own items like cardboard and plastic cups, as you take your creativity and imagination to the next level!

Nintendo LABO Robot Kit is rated 4.1 out of 5 by 96.
Rated 1 out of 5 by Realize the game from Cardboard Nintendo has found a way to sell you cardboard! Hey, if you want to spend your money on a game that is entertaining for about a day or 2 and play with cardboard then this is for you.
Rated 3 out of 5 by Grant N from Ok but not worth the money So small and took me a week just save up for an oculi us touch
Rated 5 out of 5 by Vito1018 from My review is about Nintendo labo kits! It’s the best thing Nintendo has done not just with that one but all of the labo kits it’s next gen gaming if the other systems can’t figure out to do some thing like this Nintendo will win the gaming war. Plus it’s innovative and helps children learn what they want and like to do for their future selves
Rated 5 out of 5 by 72SuzyQ from Nintendo Labo Robot Kit is a hit! My 12 year old son loves putting the labo kits together and the robot kit is no different. Only drawback is the backpack part takes up quite a bit of space.
Rated 4 out of 5 by Cylenea from Fun Fun Fun Great building project. Once it's built, it's fun to Interact with the game.
Rated 5 out of 5 by RussellW from Great fun It was a blast building it! Its so cool that you can fly too!
Rated 5 out of 5 by Captain JNC from LABO is a great experience ! This was bought for my 9 year old son’s birthday. He had a wonderful time putting it together. Even though it’s a lengthy project (several hours) it was challenging enough to keep him interested but not so difficult that he couldn’t complete it. There are very good animated instructions that you can view from a 360 degree perspective, allowing you to see the project from any angle as you’re assembling it. After it’s completed you get to enjoy your work by playing a game utilizing the project you just built. This is definitely great for anyone that enjoys building and following blue prints. I wouldn’t recommend it for someone that wants a quick assembly project.
Rated 5 out of 5 by Collin2365 from great really fun to build however not really what I expected

Does it come with a game

Asked by: Odawg305
Yes, the Nintendo LABO Robot kit includes a game cartridge. The cartridge is what you play the actual game on, but it also includes the step be step instructions to build the LABO backpack, sensors, etc. To the best of my knowledge, there isn't any other &quot;Game&quot; that works with the Robot LABO kit (unless it another LABO kit, maybe). To be clear, the &quot;Game&quot; element, in which you are a robot which you control with the things you make in the kit, is included. You don't have to buy it separately.
Answered by: A Cool Dude

Can an adult use this without size issues?

Asked by: HyperFrieza
Yea. They come with reajustable straps and ropes for all sizes.
Answered by: Martin Mann

Can you play other Nintendo switch games too?

Asked by: Jack380
Yes,but only if you buy the variety kit unless you mean games without Nintendo labo LOL&nbsp;
Answered by: Diddo

how many joy cons do you need

Asked by: jackson4567890123
Just the two the system comes with. One goes in the head piece and the other in the backpack. :)
Answered by: The Batboy

How much time does it take to build (on average) and how difficult was it to build? 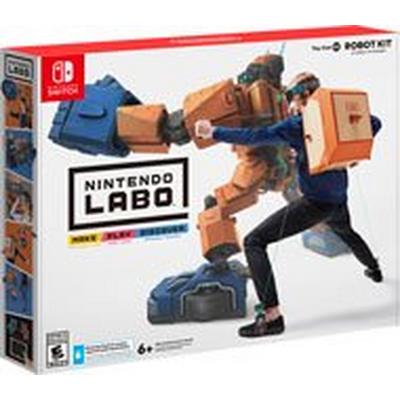