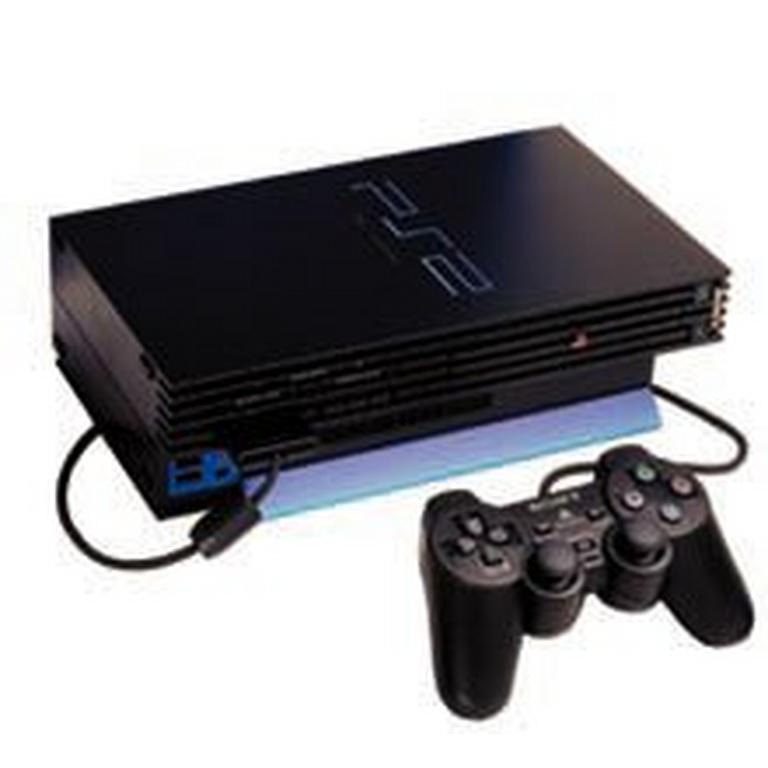 PlayStation 2's 300 Mhz processor delivers enhanced clarity and mesmerizing graphics. What's more, the PlayStation 2 doubles as a CD/DVD player. It also plays most of the original PlayStation games. Step into the 128-bit universe brought to you by PlayStation 2. You'll enjoy the look, sound, and feel of unbelievable, near-cinematic realism as you play. PlayStation 2 offers the most advanced games across every genre, DVD video playback as a standard feature, Dolby Digital 5.1 theater-quality sound, and the ability to play the immense catalog of PlayStation games. So, what are you waiting for?
More Details Less Details

The 128-Bit Emotion Engine is the first chip of its kind. No other mass-market computer technology on the market comes close to its power. In the PlayStation2, this chip is used as the workhorse of the console. It processes all physics and math calculations.

The PlayStation2 has a 128-Bit Emotion Engine. The 128-Bit part of the title means that this chipset both processes information and sends it over a 128-Bit bus (A Bus is the pathway between chips on a circuit board. A wide bus carries more bits of information and is thus faster than a narrower bus).

You may think that your PC has a faster processor, but remember that the Emotion Engine has inherently faster 128-Bit processing and it is just a part of the overall PlayStation2 power.

A small note for the really detail oriented: The reason that the speed is 294.912 MHz, is that it must be a multiple of a required processor speed that supports the DVD ROM operations.

This system boasts 32MB of Direct DRAM. DRAM (DynamicRAM) is much preferred over SRAM (Static RAM) because it is able to store data while transferring other data, making it twice as fast as SRAM. The 32MB of main memory is by far the most for any console on the market. In fact, the amount of memory is even more staggering if you remember that the Graphics Synthesizer boasts 4MB of texture memory on its own.

The PlayStation2 also has a Memory Bus Bandwidth of 3.2 GB per second. This means the memory can store and send up to 3.2 Gigabytes per second. This speeds up overall processor performance.

* Media: PlayStation2 CD-ROM, DVD-ROM, and PlayStation CD-ROM, CD Audio
This means your PlayStation 2 will basically play all your old PlayStation games (but not make them look any better), all music CDs and all North American DVDs.

* Interfaces: Controller Port (2)
These are the same as the controller ports on the current PlayStation.

* Interfaces: Memory Card Slot (2)
These slots are very similar to the ones on the original PlayStation, except they support the new, faster transfer rate.

* Interfaces: AV Multi Cable Output (1)
This is where you plug the cord that goes to the back of your television.

* Interfaces: Optical Digital Output (1)
This port will let you send data directly to a digital receiver. This is perfect if you plan to plug your PlayStation into a DTS or Dolby receiver and get perfect sound.
If you don't use digital output, your data will be converted to an analog signal and then be converted back to digital at the receiver.

* Interfaces: USB Port (2)
USB enables you to connect any number of devices to your system with a high-speed data link.

* Interfaces: I.Link (IEEE1394) (1)
The IEEE139 port is known by two names: I.Link and for Mac owners, FireWire - there are some minor differences between the two. This high-data transfer port has the advantage of supplying (some) power to devices that are connected. You can expect that an enormous number of hardware devices will use this port including speakers, printers, and other like devices.

* Interfaces: Type III PCMCIA Card Slot.
This slot is a lot like a laptop's add-in slot. Here you will be able to plug in a modem and eventually the connection for Sony's planned broadband network and hard drive.

PlayStation 2 System is rated 4.7 out of 5 by 10.
Rated 5 out of 5 by CrimsonReaper5 from Great Quality I've owned my PlayStation 2 for 15 years of my life (I'm 20 years old as I post this review) and I have to say that it still works in perfect condition from the day I bought it. The PlayStation 2 has given me tons of fun in my past and I still use it to this day. The graphics aren't as good as a PlayStation 4, but the nostalgia that I get playing from my huge games library is real. Overall, a PlayStation 2 is a great, cheap gaming console to pick up for new gamers that need a console for only 50 bucks. I know that my PlayStation 2 still brings me great fun to this day even though I've used it for 15 years now. Some day in the future, PlayStation 2 consoles will become an antique and will be worth something! I'm glad I'm lucky enough to own one.
Rated 4 out of 5 by Colton262 from Best console This is a great console. If your a kid and/or new to gaming dont buy a PS3 or a XBOX 360 quite yet. if i were you id buy a new one. ps2s are quite reliable but with a new one you get warranty. ps2 has great graphics for being released in 2000. Its 2011 and people are still buying them and Sony is still making them. A couple tips; buy your games new ps2 games tend to get scratched easily and buying a used game doesn't help. Take care of it!! one day these things WILL be worth something, since they are the best selling system of our time (much like the NES). If you have an HD television get the component cables for the PS3 (they do work on a ps2, you have my word) You'd be surprised with the amount of ps2 games that are in HD.
Rated 5 out of 5 by Dabala2 from Good i got my ps2 a very long time ago maybe around 6 years ago and i have not once had an issue with it. its never had hardware defects none of the controllers have had any problems as sometimes ps3 or xbox360 can. sure the games dont have as good of graphics as a ps3 or xbox360 but its still nice to have especially for only 50 bucks
Rated 5 out of 5 by Qfactor13 from the best of the 6th generation!! this was my first game system, i got it as a hand me down from my cousin. let me start off by saying this is the best game consul of the 6th generation, unlike the xbox it is more well balenced and has many dirent kinds of games for many difrent kinds of gamers. I've had mine for all most 7 years and it still works great. there's lots of great ps2 games out there like rachet and clank , jak and daxter and sly cooper just to name a few. also you can pike up the games for cheap so you'll have no trouble building up a larg game library. so any way if your a fan of the 6th generation the ps2 is for you.
Rated 5 out of 5 by Dman69 from Playstation 2 This is a very good game system. Very good performance and functionality. If you go and compare this to the Xbox 360 or PS3 then this doesn't have a chance. This is the greatest console that you can start out with.
Rated 4 out of 5 by emokid from works like new got the ps2 for my b-day along time ago and still working like new one of the best systems
Rated 4 out of 5 by Kylenator from PS3 IS BETTER BUT DOES HAVE CLASSICS this is a great system but the PS3 is better this system is good for kids and people who love old games it is durable works ok after a couple of years it takes longer to load but still a great system i recommend it!
Rated 5 out of 5 by name's aren't important from The chevy of the consoles The playstation 2 is a very good system. Its the most reliable system out there. More than the ps3 or xbox 360. Just as proof, my playstation 2 is ten years old. It was a hand me down from my brother. Now, the graphics are good, close to a playstation 3's graphics. The sound is great. It is the most quiet system that i have ever heard. but the thing that makes this thing great is the fact that you can do just about anything that you want to it and it won't stop working. mine has fell at least 6 times from a cabinet. So if you are looking for a system that is good enough to keep you playing and reliable enough to work for as long as you take good care of it. The Playstation 2 in my opinion, is the best choice you could possibly make. p.s it has sold more than any other console has, and probably ever will.

Asked by: Laurenm
I'd suggest giving local stores a call to see if any are available locally.
Answered by: B99z

Does it play movies

Will it be able to play blue ray dvd

Asked by: Savanh23
No, it can only play standard DVD's and CD's. Blu-ray's didn't even exist when the PS2 launched and require a &quot;blue&quot; laser rather than the traditional red lasers everything used before then.
Answered by: B99z

does it work on moives

Asked by: durls1
Yes, it can play standard CD's and standard DVD's.
Answered by: B99z

Does it have 30 day back money back garenty or warenty

Asked by: RAM30
The fat ps3 does
Answered by: Anonymous

Is this item out of stock? I would like 2 of these.

Which stores sell playstation 2 used for 50.00 dollors in Chicago 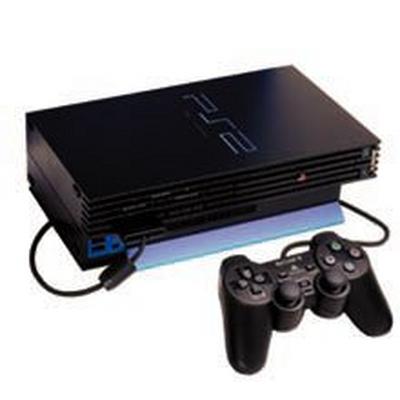