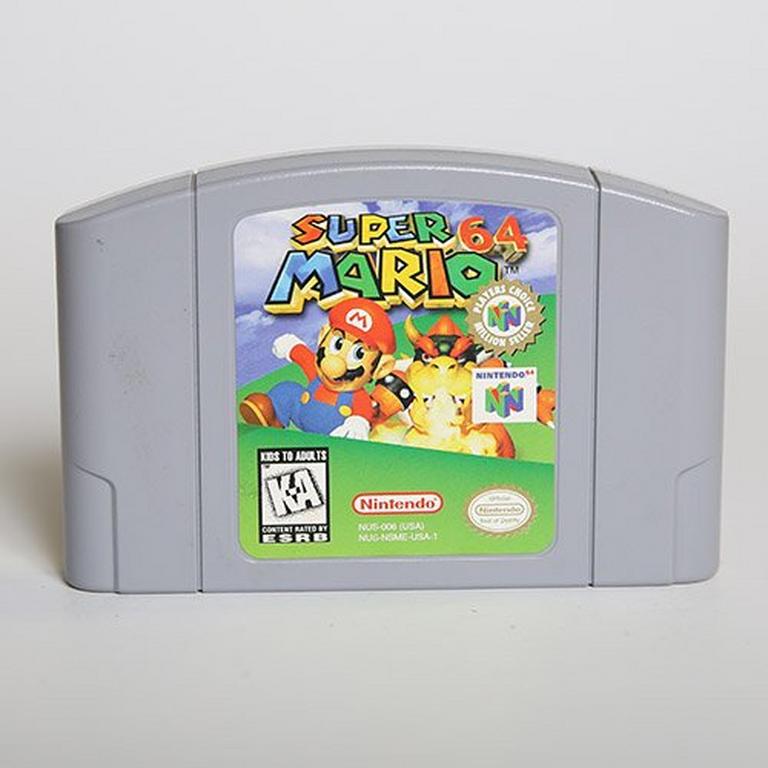 On a bright, sunny day in the Mushroom Kingdom, Mario goes to visit the princess but finds her castle eerily empty. Leaping through pictures hanging from the walls, he enters 15 magical worlds in a quest to collect the 120 Power Stars pilfered by evil Bowser and save the day. The game's vast worlds teem with daunting obstacle courses, hidden items, puzzles and more than 30 types of enemies. Take advantage of Mario's large selection of moves, including running, jumping, swimming, stomping, punching, and even backward somersaulting! Special caps give him short-lived powers, including the ability to fly. Super Mario 64 features unmatched camera control that makes adventuring in its 3D world a snap, even for newcomers.
More Details Less Details

This pre-owned product has been carefully tested, and is guaranteed to work. If you are not completely satisfied, simply return the product within 7 days for your money back. Product may not include original box and instruction manual. Item pictured may not be exact item received.

Welcome to our third entry of The Essentials, our weekly feature looking at the games every person should experience during the course of their gaming life. The games we feature include titles that had a meaningful impact on the author, or releases that blazed trails for those that followed it. Often these features are focused on universally loved games that we here at Game Informer feel should be an important part of your play history.

The Nintendo 64 represented a turning point for video games. Not only was it the final home console to use cartridges, but its technology also brought about dramatic changes for many series and genres. At the forefront of this transition was Mario, the face of the Nintendo brand.

From the moment you turn on Super Mario 64, you're inundated with a sensory assault that has the potential to make the unsuspecting Mario fan giddy. The opening screen's now-iconic introduction of the titular character – “It's-a me, Mario!” – gave many their first chance to hear the delightful Charles Martinet as the voice of Mario. While the lead-up to playing the game was enough to make any gamer excited, the moment Mario emerged from his pipe outside of Peach's Castle to reveal a full view of Mario's 3D model was nothing short of revolutionary.

Even more revolutionary at the time was the player's ability to fully control the camera. Nintendo implemented it using the C buttons to rotate the camera around Mario, essentially eliminating the problem of poor cameras many other 3D games ran into during this time. The controls worked so well that the concept has become a standard for games in nearly every genre, though the camera is now typically mapped to a second analog stick.

The Nintendo 64 controller features but one analog stick, and in Super Mario 64, it's used to control Mario's movement – a substantial change from the d-pad controls in previous games. These controls feature a level of refinement that some franchises still struggle to attain. The control scheme defined 3D games across every genre from that point on and Nintendo's ability to hit the nail on the head so early on is a major reason the Mario franchise's dominance carried over from the 2D era.

The feeling of seeing familiar characters in 3D for the first time was an experience that is difficult to adequately describe to anyone who didn't live through the 3D renaissance.

The camera control and analog stick made navigating Mario in a 3D space a joy. Nintendo used the jump to 3D to toy with the concept of open worlds. Secret stars, hidden block switches, and rewarding encounters with Toad all contribute to driving players toward exploration in what was previously a linear franchise. Even within the levels, Nintendo includes multiple star missions within the same board, encouraging players to explore every inch and giving the world a feeling not present in previous releases.

The missions within the levels are also diverse, tasking Mario with collecting 120 power stars across the 15 stages and within the castle itself. The collection aspect of the stars also plays a powerful role in fostering an engaging environment. Super Mario 64's final boss can accessed with only 70 stars, but the missions encourage players to continue playing and collecting all 120 stars.

The boss battles in Super Mario 64 are more unique and imaginative than anything seen in the series to that point. Many levels have a boss battle of some sort, creating variety in the multi-star setup of the levels within the hub world. Seeing 3D Bowser was almost as spectacular as seeing 3D Mario for the first time.

Mammoth in size and more intimidating than ever, King Koopa was back in full force after letting the Koopa Kids and Bowser Jr. do much of the dirty work in more recent entries. The Bowser battles are a perfect nod to both where the series came from and where the series was headed, as it reignited the rivalry between the two in ways no game had since the original Super Mario Bros.

The Bowser encounters were perhaps the least diverse part of Super Mario 64's design, but each battle got players' pulses racing.

The level design lives up to the pedigree of the Mario franchise, and is another testament to how revolutionary this game's jump to 3D truly was. The game isn't an overtly difficult experience – its charm lies in its mass appeal and accessibility – but it does require players hone their skills over the course of the gradual difficulty curve in order to progress effectively. In this feeling of progression Super Mario 64 is most rewarding.

Every part of Super Mario 64's presentation was groundbreaking; even the soundtrack. From the remix of the original Super Mario Bros. theme on the opening screen to the music playing within the castle itself, the aural experience of Super Mario 64 is an enjoyable one. Nearly every level's song is memorable and has the potential to stay with players long after they exit the game.

Super Mario 64 is perhaps most notable for showing that a series can make the transition from 2D to 3D without losing a step. During this era, countless franchises unsuccessfully attempted to make the jump from their 2D roots to the 3D world, making Mario's first 3D attempt all the more impressive.

Unlike a lot of games from the 2D-3D transition, Super Mario 64 still holds up to this day. The game was re-released again in 2004 as a Nintendo DS launch title, selling more than 6 million copies – an impressive feat for any game, let alone one nearly a decade old. It also went on to become a bestseller on the Wii Virtual Console.

With tight controls that hold up even today, gorgeous graphics for the time, and multiple concepts that changed the course of not just the series, but gaming as whole, Super Mario 64 is a title that should not be missed by anyone.

Learn more about The Essentials at Game Informer

Does it come With the box or just the game ?

Asked by: Tender nugget
No box or guide included. Just the game.
Answered by: Canonicus

Does it actually save after saving and quitting in game? Because I&rsquo;m pretty sure Some Mario 64 cartridges just can&rsquo;t save anymore

Asked by: Hello pls answer
Probably,I don&rsquo;t know,haven&rsquo;t played it,I test it when I get a star
Answered by: SquidwardFan

Is this a reproduction? Or is this authentic?&nbsp;

Asked by: Alex64754
I've never really heard of reproducing video games. Most N64 games you see will all legit be 20 years old, or even older. Just be wary of who you purchase from. Some people may post I nice pic like this, but actually send a game that has no cover, or is beaten up. Purchase from a reputable buyer.
Answered by: Bo Knows

Do you have this in PAL the European variant 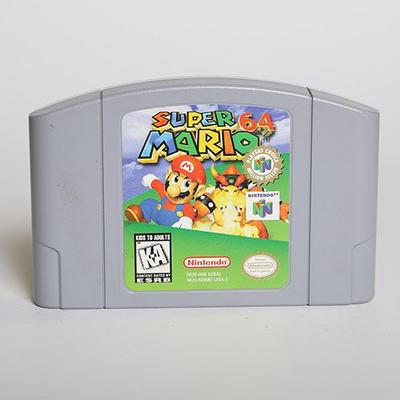