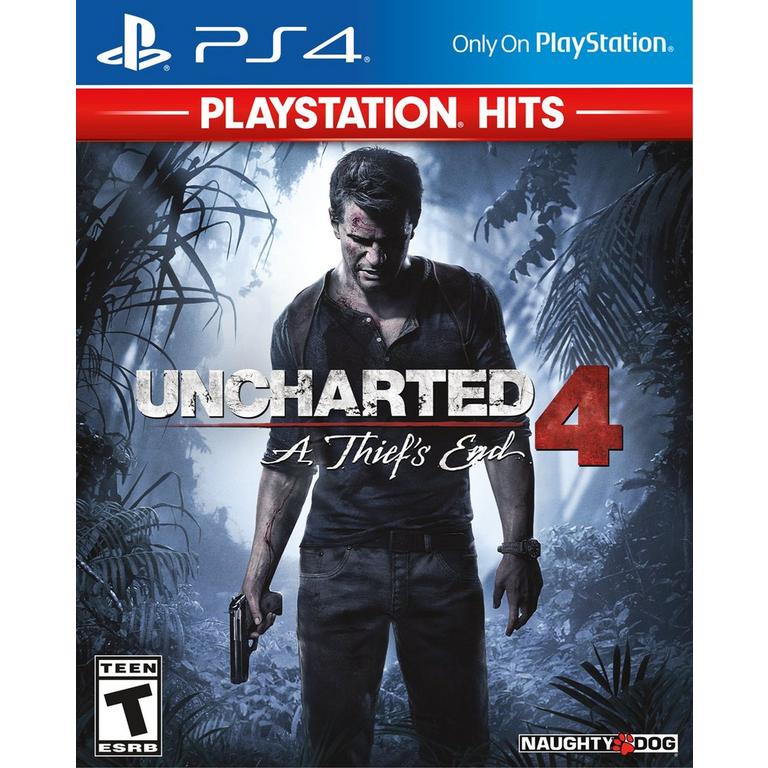 Blood
Language
Use of Alcohol
Use of Tobacco
Violence
Sony Computer Entertainment
UNCHARTED 4 A Thiefs End is rated 4.7 out of 5 by 1150.
$9.99
Buy 2 Pre-Owned Games, get 1 free! Cannot be combined with any other offer. Add items to cart for discount.
Pre-Owned
$9.99

Several years after his last adventure, retired fortune hunter, Nathan Drake, is forced back into the world of thieves. With the stakes much more personal, Drake embarks on a globe-trotting journey in pursuit of a historical conspiracy behind a fabled pirate treasure. His greatest adventure will test his physical limits, his resolve, and ultimately what he's willing to sacrifice to save the ones he loves.
More Details Less Details

Nathan Drake's final adventure is as emotional as it is exciting, a true testament to Naughty Dog's storytelling and gameplay skills

A work of art. Few details are spared in making the characters and world come to life

Nolan North and Troy Baker make a great team, and are almost always cracking wise. The score is also used expertly for tension and drama, sometimes drowning out all sound to heighten a moment

The awe factor of the world blowing up around Nathan Drake isn't what it once was, but the combat is better, and the exploration offers more gameplay and discovery

The best Uncharted yet. It hooks you emotionally early on and keeps you locked in place as the thrill of the hunt for a lost treasure takes shape

The Grim Reaper's scythe rarely falls upon treasure hunters. The earth collapses beneath their feet, arrows fly from walls, and giant boulders give chase, but these adventurous souls cannot be stopped until they locate an ancient secret. Their expeditions are brimming with rollicking fun, but their stories always end the same way: They live another day, and one less treasure is lost to the world. We know what we're getting from these serialized stories, and we love them for it. But unlike Indiana Jones (who is still chasing myths and legends at age 73) and Lara Croft (who is turning back the clock), Naughty Dog has said Uncharted 4: A Thief's End is Nathan Drake's final chapter. The subtitle alone paints an ominous picture for the famed hero, but what is it hinting at? Does he die? Disappear without a trace? Retire atop a mountain of gold?

That question turns A Thief's End into a ticking time bomb of a narrative. As this story unfolds, we see Drake's entire life come into frame – from key moments in his childhood that helped shape him to the ordinary days he spends at home with his wife, Elena. We get to know Drake intimately; we know what he's sacrificing and what drives him....

Multiplayer Worth Your Time

Uncharted 4 offers a fully featured multiplayer experience, complete with weapon leveling and a bevy of fun unlockables, like gear for all of the playable characters. The combat makes use of the same mechanics from the core game, including the grapple, which can be picked up and used as melee weapon. Thanks to nice map designs, the cover-based combat exchanges are fevered, and rarely experiences lulls in the matches. Currency earned mid-match can be used to purchase power-ups, such as henchmen that fight at your side and strange magic objects like towers that shoot ghosts at enemies.

I'm not a fan of the magical element, but I had a blast with the combat, and felt the urge to play more to unlock new content. My multiplayer time occurred solely on pre-launch servers, but even with hardly anyone playing, pre-match loading was extensive, and I was booted from queues numerous times. Here's hoping the pre-match functionality performs better post-launch. Uncharted 4 excels as a single-player experience, but make sure you give the multiplayer a whirl.

UNCHARTED 4 A Thiefs End is rated 4.7 out of 5 by 1150.
Rated 5 out of 5 by Chula8082 from The Hunt of a Lifetime Best graphics out of all 4, gameplay and plot line are incredible and keep you highly interested. The flashback gameplay makes everything more relevant, not to mention the plot twist in the end. I wouldn't and couldn't peel my self away....other than to attend my job. I stocked up on snacks at went in for the discovery and hunt of a lifetime. Worth every dime and all the time.
Rated 4 out of 5 by Horace15 from Uncharted 4 The game grabbed my attention from the beginning it’s a great action/Mission game!!
Rated 5 out of 5 by Kadosho from One more adventure The return of the epic treasure fam. One last time. Or is it? And also it's about family
Rated 5 out of 5 by Karuccci from Great game Awesome game. This might be the best story and game play if them all
Rated 5 out of 5 by tiwandavis23 from Great Game I love Uncharted 4 a well put together story, gameplay & a good way to end Nathan Drake's Journey
Rated 5 out of 5 by DEE ROCK from Awesome Love the game very much..
Rated 5 out of 5 by Tonyp904 from Good game It’s a awesome game I beat them all had to play it again
Rated 5 out of 5 by Benekeef from Draks Great series. Never going to forget this game. Can't wait to play lost legacy.

Asked by: Rware75
Well I buy a couple of games like that, and always work pretty good
Answered by: jvost

Does it have a single player game mode?

Asked by: Dakota65
Yes it does
Answered by: Richmaster87

Is it a two player game?

Asked by: Tdhum11
No, but it sure is fun trying to get through the game with friends.
Answered by: KULEBRA

Does this pre-owned game come with a game case?

Is this game multiplayer on 1 screen

How can I fix the problem reading the disc?

UNCHARTED 4: A Thief's End
PlayStation 4
Buy 2 Pre-Owned Games, get 1 free! Cannot be combined with any other offer. Add items to cart for discount.