Blood and Gore
Sexual Themes
Use of Alcohol
Violence
The Elder Scrolls Online Tamriel Unlimited is rated 3.8 out of 5 by 429.
Please Choose An Option

Blood and Gore
Sexual Themes
Use of Alcohol
Violence
The Elder Scrolls Online Tamriel Unlimited is rated 3.8 out of 5 by 429.
Please Choose An Option

Trade Value
Select Condition For Availability
Experience one connected world and stay up-to-date with everything your friends are doing in one of the most socially enabled games ever. Whether you play with your friends or adventure alone, the game's innovative mouse-driven combat system allows you to focus on action and tactics, not the user interface. Use any weapon or armor at any time and customize your abilities to play the way you want as you uncover the mysteries of Tamriel and seek heroic quests on your own terms. Explore the far reaches of Skyrim, the mysterious lands of Morrowind, the sprawling metropolis of Daggerfall and beyond. The choices you make, from the alliance you join to the battles you fight, will shape your destiny and the world of Tamriel.

After 20 years of best-selling, award-winning fantasy role-playing games, the Elder Scrolls series goes online like no massively multiplayer online game before it. Experience this epic adventure on your own or together with your friends, guild mates, and thousands of alliance members. Explore dangerous caves and dungeons, embark upon adventurous quests across Tamriel, and engage in massive player versus player battles, where the victors reap the spoils of war.

With an enhanced Elder Scrolls mouse-driven combat system, engage in real-time targeting and strategic attacks and blocks. Use any weapon or wear any armor at any time, no matter what type of character you play and develop your own style with deep character customization and abilities.

With ESO's shardless Megaserver technology you no longer choose a server, but instead play in one connected world. The game seamlessly integrates with the social media sites you already use to automatically place you with friends, guild mates, people you've encountered before, and other like-minded players. Simply jump in and begin your adventure.

Your Quest to Save Tamriel

A stolen soul. An undead army rising. A quest to recover that which is uniquely yours. Explore the hidden secrets of Tamriel at your own pace using the game's compass to guide you to areas of interest. Save the world from the evil machinations of the Daedric Prince Molag Bal and his henchman, the first necromancer, the Prince of Worms, Mannimarco.

The drums of war have reached a fever pitch, calling the warriors of Tamriel to the field of battle. The Daggerfall Covenant, the Ebonheart Pact, and the Aldmeri Dominion will take up arms and fight for control of Cyrodiil, the Imperial City, and the throne of Tamriel.

Featuring three-sided Player vs. Player (PvP) gameplay, The Elder Scrolls Online supports hundreds of players on screen at once in an open world fight for control of Cyrodiil. Seize, hold, and control the resources of massive strongholds. Utilize massive siege weapons to crumble fortress walls and smash through fortified gates. Conquer the Imperial City, and your alliance's top player could even be crowned Emperor!

Get ready for the most intense online PvP experience ever created, with The Elder Scrolls Online.

In The Elder Scrolls Online, players choose to become members of one of three alliances. Each alliance has a unique story and specific goals.

The Daggerfall Covenant is comprised of the two Provinces of northwest Tamriel: High Rock and Hammerfell, home to the Bretons and the Redguards. The Covenant has also offered the Orcs the opportunity to return to their ancient homeland of Orsinium in exchange for their support. Working together, the three races have formed a powerful alliance that aims to restore the Second Empire and bring peace and prosperity back to Tamriel.

The Ebonheart Pact is the most tenuous of alliances, consisting of former enemies turned allies in northern and eastern Tamriel. The Nords, Dark Elves, and Argonians of Skyrim, Morrowind, and Black Marsh fight to restore stability to the Empire and ensure their own autonomy.

The Aldmeri Dominion is composed of the three races of southern Tamriel: the Wood Elves of Valenwood, the Khajiit of Elsweyr and the leaders of the Pact, the High Elves of the Summerset Isles. The Aldmeri Dominion fights to stop the dangerous machinations of humankind, and restore the Elven dominance in Tamriel.

The Elder Scrolls Online features the largest PvP battles seen in a major online RPG. The game supports hundreds of onscreen players in epic battles. Swords and axes collide, spells and powers illuminate the ground and sky, and fires rage on embattled stronghold walls. Will you survive these epic battles? Can your overwhelming force take the keep, or will you be forced to retreat?

The Elder Scrolls Online is built to accommodate hundreds of players onscreen at once.

The three alliances do battle in the region of Cyrodiil, seeking to control the Imperial City and with it, the Ruby Throne of Tamriel. Each alliance must wrest control of strategic territories from the others, including massive fortresses, each with supporting farms, lumber mills, and other valuable resources.

Battles are concentrated around these resources and strongholds. Control of certain resources will extend the alliance's influence in the region and help them take control of the Imperial City, and ultimately, control of the Ruby Throne itself.

Can you seize enough territory to control the Ruby Throne?

Elder Scrolls are artifacts of immense power that aid an alliance in the ongoing battle to control Tamriel by conferring bonuses to every member of that alliance. Each alliance has a special stronghold in Cyrodiil where their Elder Scrolls are kept and protected – but enemy alliances can break in and take them if they are not guarded properly. Once access is gained and a Scroll taken, it must be taken back across Cyrodiil and placed in the alliance's stronghold. Only then are the bonuses of the Scroll bestowed upon all the members of that alliance.

Capture an Elder Scroll, protect it, and return it to your alliance's stronghold to wield its power and gain bonuses.

Player vs. Player (PvP) in The Elder Scrolls Online is fun, rewarding, and accessible for PvP veterans or new players with no PvP experience.

The collapse of the Second Empire has left a vacuum of power in the Imperial City, and three alliances battle for supremacy. Whoever controls the Ruby Throne will crown an Emperor, and their alliance will rule all of Tamriel.

The Elder Scrolls Online features a battle leveling system that temporarily increases a player's combat effectiveness to compete against higher level players, ensuring that everyone enjoys the experience, from players who have never experienced PvP combat, to seasoned veterans demanding a deep, rewarding PvP experience. Players may join the PvP action as soon as they reach level 10, and jump right into the action without fear.

Whether you're a veteran or a rookie, you'll be able to fight as a valuable member of your alliance and perhaps even lay claim to the throne.

Do you have to have the internet to play it?

Hello! Does this game require a playstation plus membership to play the game?

Asked by: Bethany B
Yes this is a online game that needs the plus membership to work
Answered by: Tabby937

Hello Is this like the base version where you can add on additional side quests like Morrowind, Summerset and the new Elsweyr Expansion ?

Asked by: Stevorhino
This is the very basic version of the game without the expansions. You can add on Morrowind, Summerset, the new one and any other extras for the game. They are available for separate purchases or are all available with the subscription.
Answered by: raevien

does this include morrowind or is that a separate expansion pack you got to get.

Asked by: chris is awesome 1
No, this is just the base game. Your best bet is to get the one titled &quot;Summerset&quot; as it's the newest version. However, the expansions are tied to a digital code so DO NOT buy used or you could risk wasting money!
Answered by: GhostPHL

Asked by: Mykal
No. The game has a free to play option. You get more perks with a subscription but the game is just as fun in free to play.
Answered by: raevien

Can you play with someone that has the game on a xbox.

What is the best guide book for this game?

Asked by: Nicole162404
The Elder Scrolls Online Tamriel Unlimited is rated 3.8 out of 5 by 429.
Rated 3 out of 5 by JMcIntyre from So-so It's not a bad game, it's just not great. It doesn't do anything extremely well, but it's free and it's kinda pretty.
Rated 5 out of 5 by Rocky_513 from Elder scrolls online Got this game for something online for me and a few friends. Tons of quests, plenty of different ways to play and characters/builds u can use and play. Highly recommend
Rated 1 out of 5 by Chris fumo from Can’t play free version that I was told I could tr Can’t play free version that I was told I could try out
Rated 3 out of 5 by Anonymous from Could be worse, could be better The base game is fine, but it really shines with the expansion packs. The presentation can feel very reminiscent of Skyrim, and not always in a good way, but the world itself is large and interesting, even if the things to do in said world aren’t.
Rated 5 out of 5 by Aaron husch from Elder scrolls online Way better than when it was initially released! So much improvement.
Rated 3 out of 5 by Cody Gawthorp from A Case Would Be Nice Kind of dissappoimted that it did not come.with the actual case and the gamestop one broke not too long after opening it. I had to put it in a CD case to protect it. I di get the game at a deal so i can not argue agaisnt that. I have not played the actual game yet so I hope it is good. Overall a good experience. 8/10
Rated 3 out of 5 by JaHoy99 from Frustrayee Hated the fact the box said all you need is a EOS account to play, but when you pop the game in it makes you purchase a Playstation Plus membership.
Rated 5 out of 5 by 3xAaa from Never ending This game hasn’t never ending quest so there’s ALWAYS something to do! They do update the game all the time so that’s a good thing. One down fall is that the extras are way pricey 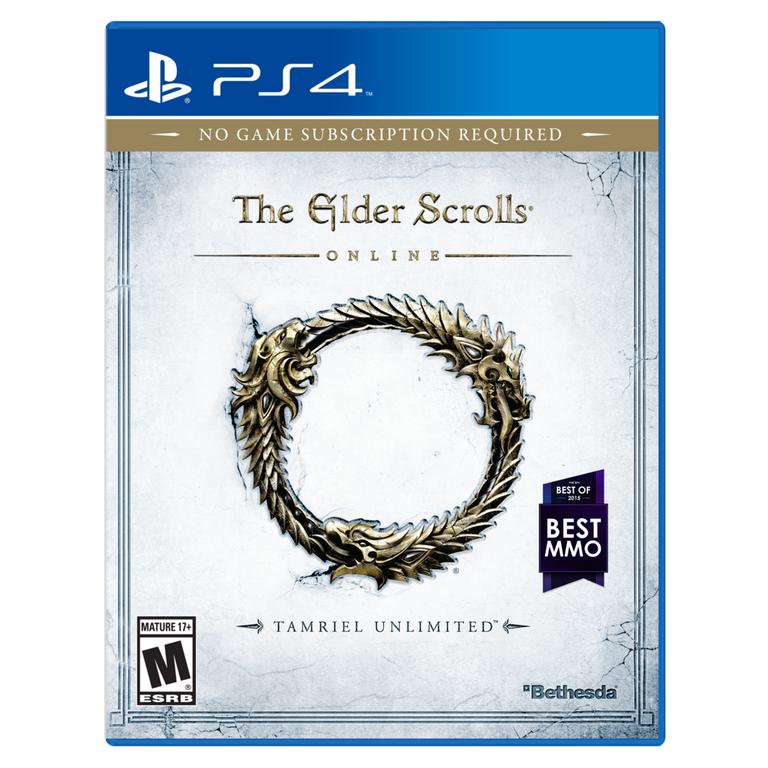