Cartoon Violence
LEGO Marvel Super Heroes is rated 4.4 out of 5 by 223.

Cartoon Violence
LEGO Marvel Super Heroes is rated 4.4 out of 5 by 223.
When the villainous Doctor Doom and Loki attacked the space-faring Silver Surfer, his board' Read More
Please Choose An Option

Get it this way:
Free pick up at store with delivery@door
at
Out of Stock at .
Check other stores
Everyday Free Shipping $35+
DELIVER TODAY NEXT DAY
($8.99 FEE PER ORDER)
Learn more
Deliver to
Verify Address Change
Please provide your address to verify you are within our delivery area.
Select Condition For Availability
Buy Together
When the villainous Doctor Doom and Loki attacked the space-faring Silver Surfer, his board's shattered remains rained down upon an unsuspecting Earth. Now the race is on to recover the powerful Cosmic Bricks that once comprised the board as Nick Fury gathers the Earth's mightiest heroes to recover them – all before Loki, Doctor Doom and their cabal of villains can assemble their Super Weapon and take over the world. Meanwhile, Silver Surfer's master, the planet-eating Galactus, comes in search of his Herald and his next meal… Earth.

When the villainous Doctor Doom and Loki attacked the space-faring Silver Surfer, his board's shattered remains rained down upon an unsuspecting Earth. Now the race is on to recover the powerful Cosmic Bricks that once comprised the board as Nick Fury gathers the Earth's mightiest heroes to recover them - all before Loki, Doctor Doom and their cabal of villains can assemble their Super Weapon and take over the world. Meanwhile, Silver Surfer's master, the planet-eating Galactus, comes in search of his Herald and his next meal... Earth.

Smash, swing and fly with over 100 playable heroes and villains from the MARVEL Universe. Leave damage in your wake with Big LEGO Figures like the Hulk and Abomination.

BATTLE WITH ALL THE POWERS OF MARVEL'S GREATEST HEROES

Soar through the air as Iron Man, spins webs as Spider-Man, and bring the thunder as the mighty Thor. Discover LEGO MARVEL Manhattan and travel to other iconic MARVEL locations such as Asgard, Asteroid M and the X-Mansion.

Bitten by a radioactive spider, the teenaged Peter Parker gained incredible arachnid-like abilities. Knowing that with great power comes great responsibility, he has dedicated himself to protecting innocents, saving lives, and battling an ever-growing gallery of super villains.

With the help of a dose of Super Soldier Serum, the puny-but-patriotic Steve Rogers was transformed into Captain America! Clad in red, white and blue and carrying an indestructible shield that he can throw to knock down his foes, the First Avenger has just recently arrived in the modern world after decades in deep freeze.

Taken prisoner by criminals, billionaire industrialist and inventor Tony Stark built a metal suit to escape. Now he fights evil all around the world as Iron Man, the Armored Avenger! With an ever-evolving series of hi-tech armor powered by the arc reactor in his chest, and a team of trusted friends to back him up, Iron Man is always on the cutting edge of justice.

With a past shrouded in mystery and a temper barely held in check, the man called Logan is a savage and relentless fighter. As Wolverine, his retractable claws make him one of the most formidable members of mutant heroes known as the X-Men.

Belted by gamma rays, brilliant scientist Bruce Banner discovered that whenever he lost his temper, he transformed into a giant green creature of unstoppable strength and power &amp;amp;ndash; an incredible Hulk! On the run from those who would capture him and lock him away, Doctor Banner has tried for years to control the raging beast within.

Natasha Romanoff has trained all of her life to be the world's greatest spy. She's traveled the globe under many different names, discovering secrets and reporting them back to S.H.I.E.L.D. A skilled infiltrator, she can take on an entire new identity without ever losing track of her ultimate mission!

Exiled from his home dimension of Asgard, the legendary god of thunder had to learn the true meaning of being a hero. Though he once sought to escape the world of mortals, now Thor protects it with all of his superhuman might &amp;amp;ndash; and the power of his mystic Uru hammer Mjolnir, with which he can control the storms and lightning. When evil threatens the Earth, the mighty Thor has sworn to defend it!

Victor von Doom is one of the world's most brilliant and dangerous super villains. As the supreme ruler of the nation of Latveria, he always has a clever scheme, invention or back-up plan to ensure his ultimate victory. Doom never reveals the scarred face behind his mask.

Occasionally a hero but more often a villain, Magneto is one of the most powerful mutants on Earth. In order to protect mutants from oppression, he believes that they should rule over all of humanity, and he will stop at nothing to make his dream a reality.

Wade Wilson, the &amp;amp;ldquo;Merc with a Mouth&amp;amp;rdquo;, is unconventional, unpredictable, and almost totally unhinged. As a mercenary, he sells his formidable combat skills to the highest bidder, distracting his opponents with jokes and seemingly inane prattle to throw them off their guard.

Once Thor's adopted brother and closest friend, the discovery of his own secret Frost Giant ancestry drove Loki mad. Now, twisted by evil, he seeks only power and revenge. A master of magical illusions, tricks and sorcery, the god of mischief will stop at nothing in his quest to conquer the world &amp;amp;ndash; or see it destroyed!

I was wondering that if this game is worth replaying because I played it on my PS3 and finished the story mode. I don't know if I want the Lego superheroes 2 game because it doesn't have fantastic four or X-Men

Asked by: Jespinoza2
LEGO Marvel Super Heroes is rated 4.4 out of 5 by 223.
Rated 5 out of 5 by Queenbeemommy from Fun for all ages even adults I like the lego marvel game and any other lego action games. The action, comedy and the challenges of the game are well worth the buy. My 10 year old son and I play this game together. We have a lot of fun
Rated 5 out of 5 by Wonge from Lego I bought for my son and he loves it. He plays it all the time whenever he is free.
Rated 4 out of 5 by Christopher Masters from True MCU While I appreciate that this game is essentially fail proof with infinite lives for your characters on every level. The game does not do a very good job of instructing you how you are supposed to beat those particular levels so you’ll need all of those lives in order to figure it out. Players coming to this from the Harry Potter Lego adventures might be a little taken back by the intense action that this game provides As the Harry Potter installment was more puzzle solving and platforming. That said this is a true marvel universe game as it contains almost every character you could think of from the avengers to the X-Men the fantastic four and several other characters from the Marvel universe. And although the Lego characters do fight and occasionally explode I would have no problem allowing a young child 8 to 9 years old to play this unsupervised.
Rated 4 out of 5 by OmniSovereign from Cool Little Game. Kids love it. Kids love the game. Story is funny and entertaining. Plenty of characters to play as. With a variety of abilities. Also is 2 player and has character creation allowing for some mixing and matching of abilities Also a good game for platinum hunters.
Rated 4 out of 5 by Hope4humanity from You get to fight bad guys...really bad guys! It’s good! Per 7-year-old, hard to please Kingston!
Rated 5 out of 5 by Jennifer Fisher from N/A Great game . Loved all the characters you can play
Rated 1 out of 5 by Loons from Don’t bother Difficult to play - bought it for my 10 yr old bit even I couldn’t pass the 1st level. Waist of money
Rated 5 out of 5 by Djentleman from Great game! Great game, tons to do. Played it with my wife and we thoroughly enjoyed it. 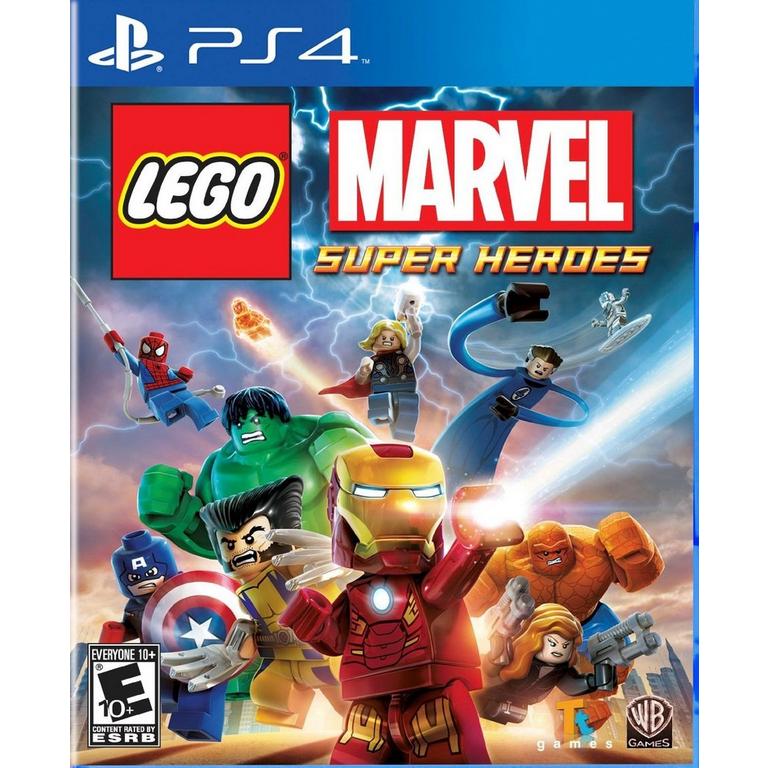