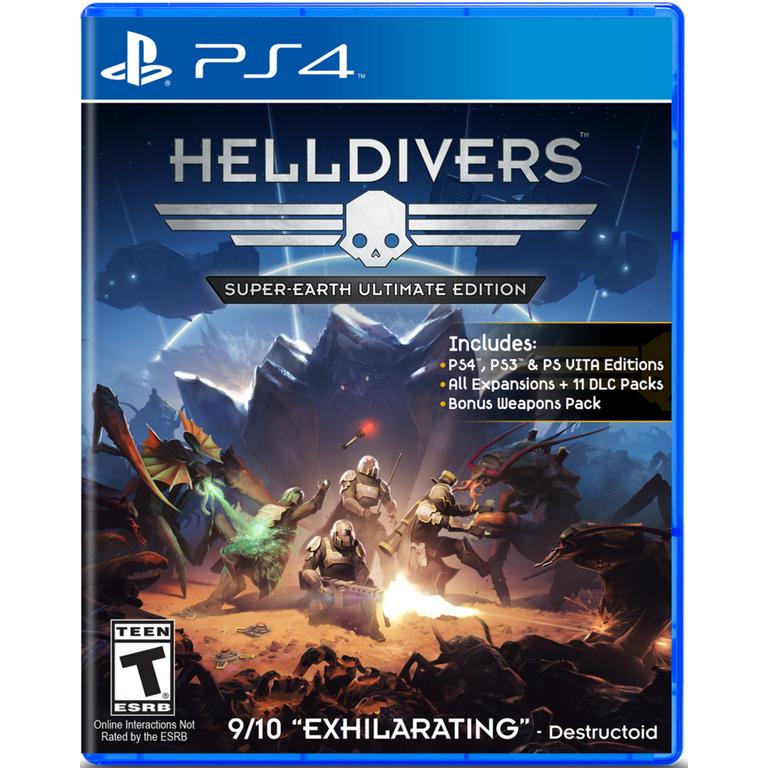 HELLDIVERS is a hardcore, cooperative, twin stick shooter from the creators of Magicka. As part of the elite unit called the HELLDIVERS, players must work together to protect SUPER-EARTH and defeat the enemies of mankind in an intense intergalactic war.

Upgrade and operate over 70+ overpowered weapons and vehicles

Rise through the ranks and call in devastating military support

Turning Up The Heat Expansion

Masters Of The Galaxy Expansion

LAS-16 ‘Sickle': A carbine based on laser technology, modified to behave more as a regular assault rifle. It overheats quickly but well placed shots do excellent damage and the virtually unlimited ammunition is invaluable in tight situations.

AD-289 ‘Angel': A backpack drone system, with an automated healing and repair drone that will try to help all friendly targets in its vicinity. It will land in the backpack to refill the restorative substance.

CR-9 ‘Suppressor': A semi-automatic rifle firing small fragmentation grenades. It is a volatile weapon but capable of devastating large masses of enemies, hence the nickname ‘Suppressor'.

AD-334 ‘Guard Dog': A backpack drone system, featuring an automated defensive combat drone armed with a small submachinegun. The drone circles ahead, firing at targets of opportunity and will land in the backpack to reload.

SMG-34 ‘Ninja': A silenced, compact, submachinegun with short reach and good accuracy. The silenced aspect has been debated much and there is no proof that it actually reduces the risk of detection.

MLS-4X ‘Commando': A multiple missile launcher system similar to the one used on the EXO-44. From its four barrels it fires seeking missiles at a high rate of fire primarily an anti-personnel weapon, it can be upgraded to have limited anti-tank capabilities.

Close Air Support: An 'Eagle' delivers a powerful strafing run followed by a pair of anti tank missiles. Effective at damaging almost all targets it does however have the drawback of being slightly unpredictable.

AC-5 Arc Shotgun: A further development of the Arc technology, the AC-5 fires a wide, short range cone and damages everything covered by the static discharge. The charge up is much faster than the original Arc Thrower but the discharge is not quite as powerful.

EXO-48 'Obsidian': A powerful exosuit with two double autocannons. The firepower contained in this walking monstrosity annihilates light and medium infantry, and the two magazines allows for both maximum firepower or conserving ammunition. The only downside to this mech is its distinct lack of anti-tank capabilities.

AR-14D 'Paragon': A heavy semi-automatic rifle firing rounds similar to the AR-20L 'Justice', but without the penetrating capabilities. Instead the rounds are filled with a neurotoxin, causing targets to become slow and sluggish.

MG-105 'Stalwart': A light machinegun based on the AR-19 'Liberator'. It's very powerful when used in sustained fire, but the initial recoil is often hard to handle resulting in unpredictable spread.

REC-6 'Demolisher': A remote Explosive Charge capable of destroying both objectives and heavily armored enemies. The user can decide when to detonate the charge by pressing the detonator, often referred to as a Satchel Charge.

AT-47 Anti-Tank Emplacement: A well armored emplacement that has to be operated manually. Initially it was controlled by the standard Helldiver issue turret AI, but it was deemed far too lethal for automated operation.

Anti-Personnel Barrier: An airdropped barbwire fence capable of slowing incoming enemies. The barbed wire itself does very little damage but will entangle pretty much anything before it can power through. Eventually things do get through, but hopefully the barrier will have bought the Helldivers some extra time to deal with the threat.

SH-32 Directional Kinetic Shield: This pack projects a shield in front of the wearer that slows down incoming projectiles, significantly lowering their damage potential. While very powerful, it is limited in that it only protects its wearer from one direction.

P-6 ‘Gunslinger': A heavy six-shooter revolver. The aptly nicknamed 'Gunslinger' revolver might seem flashy, but packs a proper punch and comes with built in laser sight.

FLAM-24 ‘Pyro': A compact flamer with the same power as the unupgraded FLAM-40. It has shorter range and very limited ammunition compared to its larger cousin, but is very handy when you're on the move.

PLAS-3 ‘Singe': A plasma pistol based on the experimental technology of the PLAS-1. It fires superheated gas that explodes on contact with its target. Not recommended for point blank range, but a powerful weapon in its own right.

MC-109 ‘ Hammer': A sturdy combat motorcycle complete with sidecar. This is a lightly armored vehicle with high speed, excellent for when you want to move fast. Upgrades with a standard machine gun, though it provides some firepower it's more for self-defense than attack.

EXO-51 ‘Lumberer': An anti-tank specialized exosuit incorporating a 90mm cannon and a flamer. Though the cannon is very powerful, it has a low ammunition supply and some severe accuracy issues unless standing still.

PLAS-1 ‘Scorcher': The first ever Helldiver issued plasma weapon. This primary weapon fires bolts of superheated plasma that explode on impact. To ensure that the weapon is safe and reliable to operate, Super Earth scientists had to remove the full auto fire mode.

M-25 ‘Rumbler': The ‘Rumbler' is a heavy portable mortar firing three round bursts of 80mm grenades. Though heavy and prone to ammunition shortage, the 'Rumbler' allows the user precise control of where the shots land.

AC-22 ‘Dum Dum': The AC-22 is a 20mm cannon commonly found in the Helldiver arsenal, though usually mounted on vehicles. This is a shoulder carried version that allows Helldivers on foot to carry a very powerful weapon that is excellent for taking out medium armored targets.

HELLDIVERS is a top-down squad shooter set in a dystopian future where mankind is ruled by a managed democracy. As part of the elite unit called the HELLDIVERS, players must work together to protect Super Earth and defeat the enemies of mankind in an intense intergalactic war. Available exclusively as a cross-buy on PS4, PS3, and PS Vita systems, HELLDIVERS features cross-play and cross-save.

Masters of the Galaxy

Turning Up the Heat

Helldivers Super-Earth Ultimate Edition is rated 4.3 out of 5 by 27.
Rated 5 out of 5 by Elqueysolo from Whole family loves it Great game for team play. Have to work together and strategize to beat the missions. Real exciting game.
Rated 4 out of 5 by Executionr from Couch co op yay Had a lot of fun with this game it's really a good change of pace from the standard fps game great couch co op 5star
Rated 5 out of 5 by Gesacus from Great Game I'm not much of a twin-stick shooter aficionado but HellDivers had me hooked right from the beginning. The action was crisp and fresh and even the tutorial was pretty fun. Great game.
Rated 3 out of 5 by Lemunso from Pure mayhem! I enjoy this game quite a lot. I got it because it looked fun and different then what I had been playing and it was. All in all I am please and would get a 2nd installment if they made it.
Rated 4 out of 5 by gamerforlife420 from Awesome co-op game! Not great in solo mode. When playing with friends/family in co-op mode, this game is amazing and worth 5 stars. Single player is another story at closer to 2 stars so I gave the game an overall rating of 4. Looking for a fun local-multiplayer game, this is it!
Rated 5 out of 5 by Grissm from Tons of Gameplay I bought this a few weeks ago as a couch co-op for my friends and I. The learning curve is pretty low tbh. But, there is a TON of gameplay to be had. 3 different alien worlds, a massive amount of unlocks, tactics, etc. We're gonna have prob over 100 hours on this easily.
Rated 3 out of 5 by DerekDomo from Ugly cover I order a new CD. But when I received it, it turns out it is a pre-owned one. I am very disappointed.
Rated 4 out of 5 by fusionXshotzzz from What a Fun Suprise This review is much late due to the fact that I had promised to report on how good this game was to gamestop on the the day it came out, which was the day I bought it. Now that I have played this game for some time I have enough experience to write an honest review. Helldivers is as exciting and wild as its name suggests intertwining humor and overhead shooting into a great combo. In Helldivers you are a protector of super earth who goes on a galactic conquest taking over what ever planets you wish. In your spaceship you have the choice of landing on hundreds of different planets and complete a variety of tasks in order to claim that planet for super earth and give your enemies a taste of democracy. The game stands out compared to other games like it in the aspects of gameplay, characters, and playing with your friends, This is a game by all means that you would get the most fun out of by playing it with your friends. The most fun that comes out of this game is the hilarious results of attempting to use teamwork and combined knowledge with your friend to take out the enemies. One instance was when my friend and I dropped a tank on the battlefield to take out the more powerful enemies. I jumped in the driver seat while my friend jumped in the turret to shoot down the enemies yet the controls of the tank were so strange that I ended up driver both of us off of a cliff several times. The most fun that comes out of playing this game with friends is if you have your friends with you in person, and the more people playing, the better. The gameplay of this game is very, very good. It is a well thought out top down shooter strategy game, that truly tests your wit. With possibly hundreds of procedurally generated planets the atmosphere of this game never dries , which also helps keep the gameplay fresh. There is a variety of enemies to hunt down from three different races, The bugs, Cyborgs, (and my favorite) the illuminate ( which include giant eyeballs). The variety of guns keep you having fun along with the ingenuities stratagems ( which I don't want to spoil). Overall the gameplay is very fun and unique in relation to other strategy games. This is a very good game an the verdict represents that. Always remember to play this game with a large group of friends.

Does the prepaid version come supplied with the dlc codes for the content?

Asked by: Dibz781
No, you don't have to download anything extra. All the content comes unlock in-game already.
Answered by: Kkshi

I am trying to find the PS Vita version to Helldivers, Does this include that? 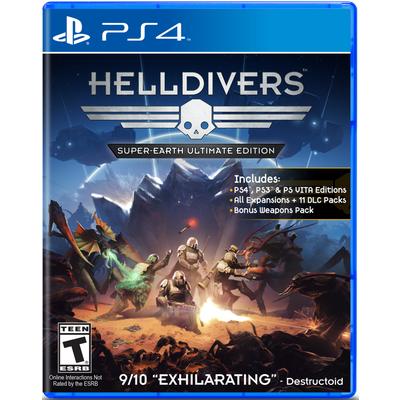