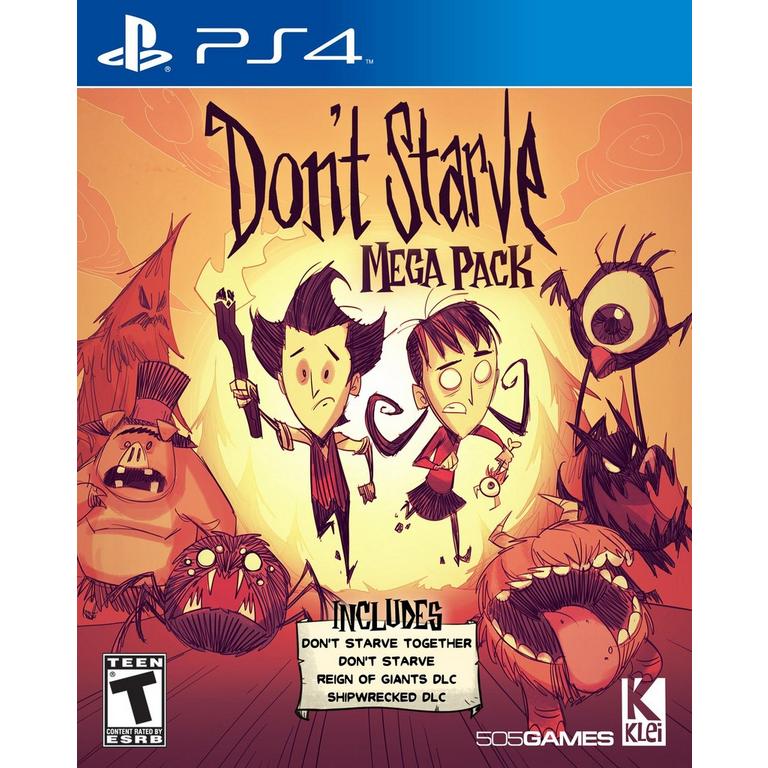 Don't Starve: Don't Starve is an uncompromising wilderness survival game full of science and magic. You play as Wilson, an intrepid Gentleman Scientist who has been trapped by a demon and transported to a mysterious wilderness world. Wilson must learn to exploit his environment and its inhabitants if he ever hopes to escape and find his way back home. Enter a strange and unexplored world full of strange creatures, dangers, and surprises. Gather resources to craft items and structures that match your survival style. Play your way as you unravel the mysteries of this strange land.

Don't Starve Together: Don't Starve Together is the standalone multiplayer expansion of the uncompromising wilderness survival game, Don't Starve. Cooperate with your friends in a private game, or take your chances with strangers online. Work with other players to survive the harsh environment, or strike out on your own.

Reign of Giants: Reign of Giants is an expansion pack that adds new characters, seasons, creatures, biomes, and other challenges to Don't Starve and Don't Starve Together. The entire world has been expanded and is now even more uncompromising! New biomes have been filled to the brim with new creatures and gatherables that will either help you survive - or kill you. New mysteries, challenges and scientific innovations await your discovery. Manage your resources well, because the wilderness of Don't Starve has learned some new tricks.

Shipwrecked: Craft a boat and set sail for adventure! Shipwrecked is a single-player expansion to Don't Starve where Wilson finds himself stranded in a tropical archipelago. He must learn to survive all over again in this new environment filled with new biomes, seasons, and creatures. Scavenge for new sources of food and craft recipes to build an array of new gadgets to help yourself survive these harsh islands. Don't let the tropical breeze lull you into a false sense of security - the world might be different, but it is still equal parts unforgiving and uncompromising. You will quickly find these islands are full to the brim with things that want to kill you.

Dont Starve Mega Pack is rated 4.2 out of 5 by 91.
Rated 4 out of 5 by Dat1B00tyEater from A surprising twist A simple, yet interesting game. The game has more depth than I intended.
Rated 5 out of 5 by Geo Garvey from Addictive as can be! I remember playing this a few years ago at a buddy's house. Recently I saw it in store and instantly wanted to buy it! I love this game. I found it really easy to play and survive, but littler children may have an amount of trouble at first (as did my smaller sibling). Graphics add A LOT to the game in my opinion. This game is going to rack up a lot of hours for me.
Rated 4 out of 5 by Rudiger Shabadu from Highly addictive Couch co-op What a great game to play with friends! Every play through is a different experience and the open gameplay will have you in the “one more round” loop. One downfall is the lack of labelling within the crafting menu, forcing you to remember what is what
Rated 3 out of 5 by Andrewme from Better for multiplayer than single player Hard long term single player. Has local multiplayer which is fun and easier to play through the game.
Rated 5 out of 5 by MK18 from Great for 2 Players Great for two players!! Amazing game, smooth gameplay and structure.
Rated 5 out of 5 by Yggdrasill from Fun coop with a challenge Got this for coop play and it’s been great fun while still being challenging.
Rated 5 out of 5 by Demononz from Great game for 15 year old and under I bought this for my nephew at the same time as buying him Far Cry New Dawn. He loved both games, but spends way more time playing this one. It doesn't look like something I would enjoy myself since I am more of a Skyrim/Witcher III kind of guy, but for a 15 year old kid this seemed to be perfect.
Rated 5 out of 5 by ShyChey from Fun game Its fun to play with friends and just a nice game overall

How do you access the single-player DLCs included with this &quot;mega pack&quot;?

Does this disc have the DLC &amp; don't starve on it?

Asked by: Meepthesheep
You have to use the dlc codes that Gamestop provides on the receipt to gain the rest of the content. If you want a physical disc that actually holds all the game content instead having to download, you have to contact Klei Entertainment from their site and give them the dlc code from your receipt so they'll mail you a game disc with everything on it. Although, they were doing this for customers a while back, so just check with them to be sure they're still doing that for customers.
Answered by: Veek

Why is it called &quot;Mega Pack&quot;? 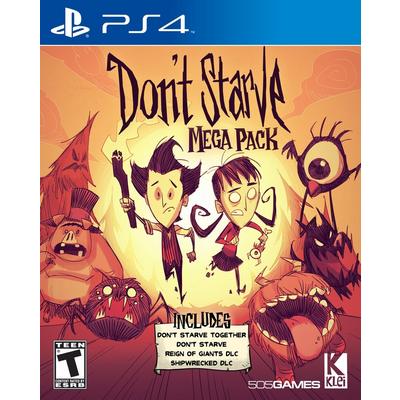