No Descriptors
DiRT Rally is rated 3.6 out of 5 by 52.
DiRT Rally captures the essence of what makes rally unique – that sense of trying to remain Read More
Please Choose An Option

Get it this way:
Free pick up at store with delivery@door
at
Out of Stock at .
Check other stores
DELIVER TODAY NEXT DAY
($7.99 FEE PER ORDER)
Learn more
Deliver to
Verify Address Change
Please provide your address to verify you are within our delivery area.

Everyday Free Shipping $35+
Select Condition For Availability
DiRT Rally captures the essence of what makes rally unique – that sense of trying to remain in control, as you hurtle along dangerous, undulating roads at breakneck speed, aiming to squeeze everything out of your car whilst knowing that one crash could irreparably harm your stage time.

Taking The Hard Road To The Top

The regular rally racing is gorgeous, but I encountered dropped frames during the multi-car rallycross

Listening to a car game usually gets old fast, but I don't think I'll ever get tired of the cacophony of an engine popping and crackling, the crunching gravel, and screeching tires

Dirt Rally isn't deep in every area, but the gameplay alone makes this my favorite rally game

It's easy to approach a rally game as if it's another racing title. Speed, fighting for control, and a strong competitive spirit rule both, but rally racing is a different breed. If the focus of regular racing is primarily the finish, then rally racing is a marathon where you die and are reborn a million times before you reach the end. Corners aren't the only place where you gain or lose time. Every second is an attempt to conquer a growing fear. Victory at the finish line – and knowing the dangers you pushed past to get there – is an exhale of relief as much as jubilation.

To tap into the moments that make rally racing so exhilarating, you need a game that isn't just about sliding around hairpin turns. Dirt Rally's superior car handling communicates the vibrancy and challenge, creating an unparalleled experience. Dirt Rally isn't alone in translating velocity, physics, weight transfer, traction, and other intangibles into a video game package. However, the way it taxes these elements every second you're on the course in a flurry of ever-changing demands is what elevates the genre.

For example, I get a little air coming over the crest of a hill, which is not a fist-pumping moment. Being that the crest itself is at a slight angle, I have to prepare my takeoff angle before I go airborne, and once I land I'm immediately trying to gather the car back up and get ready for the bend ahead. I'm on light gravel so I shouldn't expect too much of a slide or spin of the tires, but I also have to flirt with when and how much brake I apply versus maintaining speed. Throw in a rock on the outside of the already-narrow bend that will likely destroy my car if I'm not careful. This isn't some big setpiece in a boss battle of a track; it's just a typical sequence you have to deal with that feels wonderful in your hands.

The co-driver is good about calling out what lies ahead through a sometimes complicated lexicon (but when he says Don't cut for a corner, that's a clear directive). You cannot ignore any of it, nor listen to all of it. The sweet spot occurs when you get into that auto-pilot zone, internalizing the next 100 or so yards while also focusing on the danger at hand. This is gaming as tense and demanding as you've ever known it.

Built by Codemasters and road tested over 60 million miles by the DiRT community, DiRT Rally is the ultimate rally experience. It captures the essence of what makes rally unique like no other game – that sense of trying to remain in control of your emotions, as you hurtle along dangerous, undulating roads at breakneck speed, aiming to squeeze everything out of your car whilst knowing that one crash could irreparably harm your stage time.

Every stage tests you differently, as you race on the edge of control across varying surfaces in a range of environments such as snow, ice, tarmac and dirt and as you tackle a variety of weather types. As the car suffers attrition, you need to account for mechanical damage whilst your dedicated rally team tries to keep you competitive with time-limited repairs. Stages string together and each rally becomes a marathon-like test of concentration and skill as you trust in your co-driver, chasing that ever-elusive perfect run.

DiRT Rally also includes officially licensed World Rallycross content, allowing you to experience the breathless, high-speed thrills of some of the world's fastest off-road cars as you trade paint with other drivers at some of the series best-loved circuits, in both singleplayer and high-intensity multiplayer races.

Asked by: Jhaofallu123
If you have a PlayStation plus membership yes, online.
Answered by: I searched with Bing
DiRT Rally is rated 3.6 out of 5 by 52.
Rated 1 out of 5 by Anonymous from Unable to rate - did not receive a working copy. Unable to rate - did not receive a working copy. Unfortunately I cannot rate the game. Wife bought this game for me as a B-Day gift. It did not work when it arrived, so back to the store for a trade. When we took the second copy home ... that did not work as well. Returned that copy to the store and they did not order me a new copy .... just processed a refund. Sent a note to Game Stop on this issue and have not heard anything back from them. So, again, not able to actually rate the game for game play ... but can indicate that the quality control on games is rather low.
Rated 5 out of 5 by AdaMitch from REAL Rally As realistic as it gets! Best rally game available...hands down!
Rated 5 out of 5 by Mr Obnxus from Great simulation game Very realistic, good selection of cars and tracks !
Rated 5 out of 5 by Volta from Best rally game Real racing sim not a game to mess around but that’s what I wanted the sounds of real rally
Rated 4 out of 5 by Mikeymike4784 from Car driving and handling The handling and the way the car feels, it feels right like a real car.
Rated 4 out of 5 by Whitedeath _36 from Dirt rally Its controller friendly , some of the game mechanics is basicly like dirt 4 , graphics aren't as good
Rated 5 out of 5 by Sljdriver from Best Rally game. Feels realistic as possible. Recognizes Racing wheels and provides options.
Rated 5 out of 5 by Ace3581 from Good game I bought this for my boy he is just now getting in to racing game. He likes it so far. 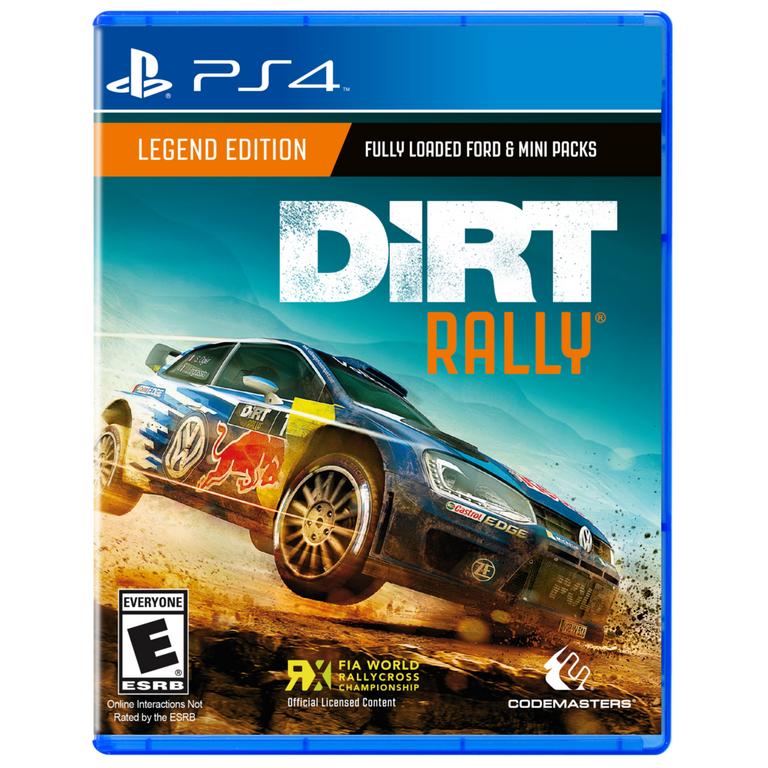