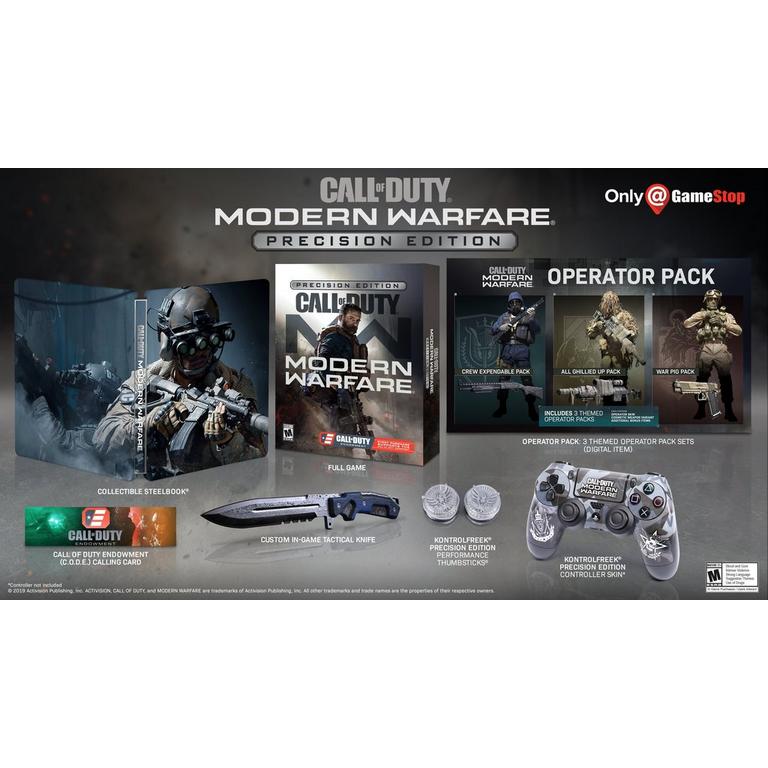 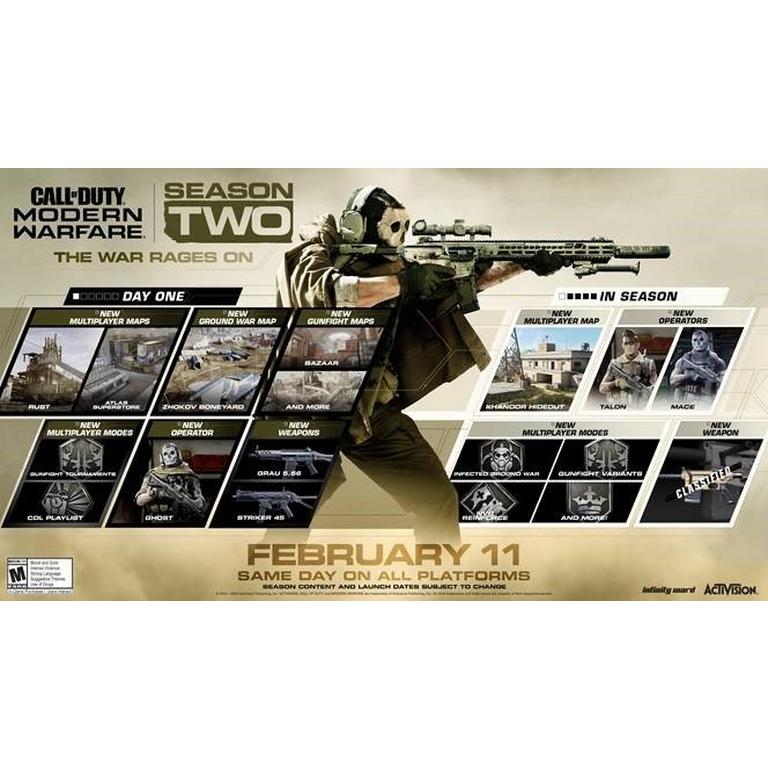 Blood and Gore
Intense Violence
Strong Language
Suggestive Themes
Use of Drugs
Activision
Call of Duty Modern Warfare CODE Precision Edition Only at GameStop is rated 4.4 out of 5 by 8944.
$79.97
New
$79.97

Only at GameStop, get an exclusive GameStop C.O.D.E. Calling card with purchase of the game. For every copy sold, GameStop will donate to the Call of Duty Endowment, which helps find high quality jobs for unemployed veterans

*While Supplies Last. Not included in Pre-owned or DIgital.

Online Customers: Code will be packed with your game.

Store Customers: Code will be packed with your game.

Prepare to go dark, Modern Warfare(R) is back! 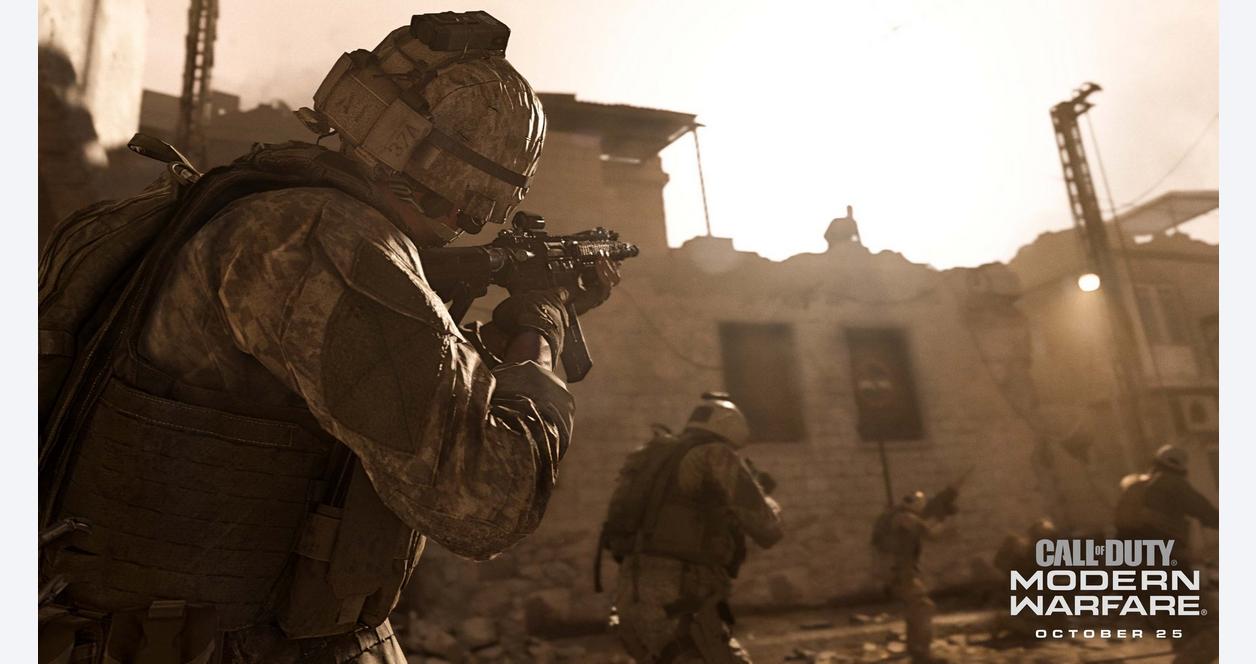 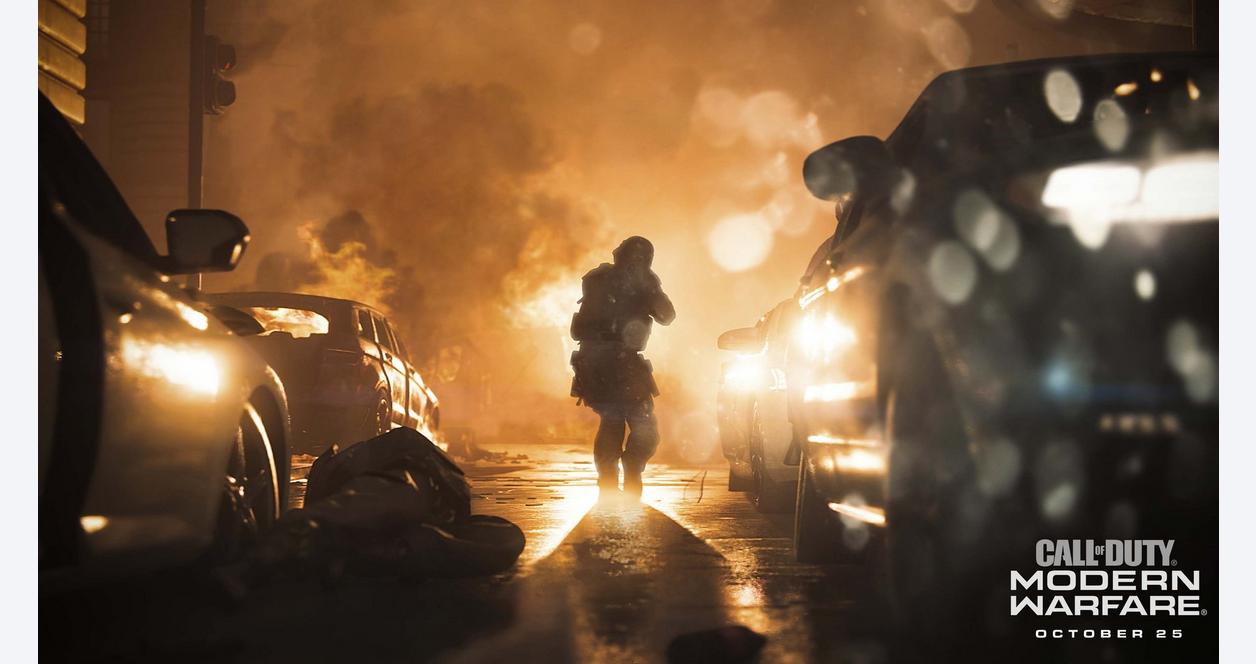 A New Theater Of War

Modern Warfare is familiar in name, but its content carries a different tone and flow than we’ve come to expect from the annualized Call of Duty series. Developer Infinity Ward takes big chances in both multiplayer and the single-player campaign, and while some of the ideas hit with deadly precision, others fall flat.

A three-headed experience that succeeds in multiplayer, gets lost in the dark in single-player, and misses the mark completely in cooperative play

Infinity Ward’s new engine delivers a high level of realism in the lighting and character models, but the environments are mostly mundane given the focus on smaller conflicts

The music, voice acting, and rattling gunfire are all excellent, heightening the intensity in all modes

The pitch-perfect gunplay is joined by a wide selection of multiplayer modes that give players variety, including short and fun 2v2 fights

Leveling up guns is ridiculously fun, and the breadth of modes keeps this experience from feeling repetitive. This is a game you can sink tons of time into

Call of Duty Modern Warfare CODE Precision Edition Only at GameStop is rated 4.4 out of 5 by 8944.
Rated 1 out of 5 by BQ117 from Large maps, slow game pace, camping every corner With large maps, darks areas, long corridors, 3 way maps, this game promotes camping very easily. Other call of duty games have been great with large maps but this because the game play is much faster, players can use specialist to get around. But in MW, campers have an absurd advantage of camping corners or rooms. They can hear you coming and mount, they can go probe and hide. Meanwhile the pusher is trying to get to an objective or flank and gets killed at the same corner or room. Also the campers are not revealed on the mini map like other cod games. When they shot, players see where the shooters’ general vicinity is, but not where they are. This leaves the players having to check every corner and every door. This game has potential to be amazing but with slow game play and way too many ways to camp, it is a poor game.
Rated 3 out of 5 by Atreyu504 from Fun game, keep your political opinions to yourself The game is pretty good. I could do without all the political pandering. I play CoD to take a break from everything going and just relax. It's a game. I don't need to pay a multimillion dollar corporation to preach to me about their political beliefs through load screens. The campaign was a lot of fun and warfare is really good time. All around solid game.
Rated 1 out of 5 by jh1965 from This game is garbage. I can't even play due to internet required. What a ripoff
Rated 5 out of 5 by Bryan Jiménez from Call of Duty Modern Warfare I really like this game it's a lot of fun. I have a great time with my friends while playing online with them I wish I would update it more often.
Rated 3 out of 5 by Bloodpheen from Huge updates are annoying The updates they keep bringing out are way to big. I don’t have time to play as much as I use to, but when I do I just spend it updating.
Rated 2 out of 5 by thebandman from unplayable at times Spawns can be atrocious at times. Shoot someone ten time they hit u with 3 and u die
Rated 2 out of 5 by MikeSUGARLAND from Disc vs digital Its hit or miss on actual ps4 disc. Much better on digital download on COD Modern Warfare
Rated 1 out of 5 by Tony6363 from Horrible game Very difficult to constently ger kills on multiplayer. You could have your gun built up to the highest level with everything unlocked and still have trouble killing someone. I hate this game so much I deleted it. Bring back modern warfare 2 with quick scopes much better than this trash game. Very frustrating game to play.wish I could give a zero stars the older call of duty games much better than this one,

Asked by: Bohemio
No, Call of Duty is a first person shooter only. It&rsquo;s a great game though I highly recommend you pick it up if you like shooters.
Answered by: rayaaxe

Can I play offline with game.

Asked by: elpaso
You can&rsquo;t play online but you can play the campaign&nbsp;
Answered by: Daniel molina

Can you play in 3rd person

Asked by: Dave08
I&rsquo;m sorry but that&rsquo;s a no.
Answered by: Ninjaboi2341

Can you play multiplayer offline on one system.

I got this game for Christmas and it says it will come with a code packed with the game and I didn&rsquo;t get the code wtf . I would like my code please how do I get it or redeem it ?

Asked by: NeedaCleanRoom
Most codes are usually printed on the receipt.
Answered by: xRaZoRv

Is this game a single player game as well as online?

Asked by: Jmack114467
Yes there is a single player campaign as well as multiple multiplayer modes. Enjoy!
Answered by: Cyclops_hammer

Is the campaign split screen&nbsp;

How many gb does it take for Xbox one&nbsp;

Asked by: Matthew Duran
Thank you for the question, This game requires 150GB of free space. (subject to change)
Answered by: GameStopTeam

what is the storage needed for this game

Asked by: Hgreen71
Thank you for the question, This game requires 150GB of free space. (Subject to change over time)
Answered by: GameStopTeam

Will Campaign be playable offline?

Will the campaign be playable offline?

Asked by: JOrtiz33
Yes, you can play the full story offline.
Answered by: rayaaxe

Do I need access to internet to play this game? I prefer that it does not have this requirement.

Asked by: The esplanade kid 280
For multiplayer, which is part of the game yes.
Answered by: Mom2019

Is Survival mode missing or do you get the full experience at launch compared to the ps4 ?

Is one bundle better than another.

Asked by: whydoooooo
yes and no if your looking for just the base game the just buy the base game but if you want the extra skins you could buy the operator pack if your asking if this game has a bundle that gives you guns at the beginning (pay2win) then no, there is no pay2win mechanics (from what it looks like)
Answered by: Ayden B Sullivan

Asked by: Agos
If I am not mistaken the physical copy comes with the thumbsticks and controller skin along with the downloadable knife and other content. The digital copies don&rsquo;t look like they come with any physical items.
Answered by: Bulge3626

Asked by: Nick044
I dont think so. I pre ordered the game on may 30th and i didnt get any of that stuff
Answered by: Thinknoodles879

Do I need the disk to play this game when beta is over?

Asked by: Ags88
Unless you buy the actual digital copy of the game than yes
Answered by: NxtLvlGaming101

Does it come with poster?

Asked by: Bloodhound007
If it doesnt say that it comes with a poster than it prob. doesnt come with a poster...
Answered by: NxtLvlGaming101

Will the kontrolfreek extras also be included in the 'Dark Edition' of modern warfare?

Asked by: edavid5
Most likely not, items usually shown in the picture will be the only things that you'll get within that bundle. They may change the bundle to include more items if the dark edition doesn't sell.
Answered by: RLVGaming

Are the &quot;Call of Duty&reg;: Modern Warfare&reg; Precision Edition Performance Thumbsticks&quot; by kontrolfreek that are part of the Precision Edition preorder currently the ones that are on sale? Or will they be completely different?

Asked by: Daftmunkey
Read the description. It says KontrolFreek
Answered by: Knot666

Does this come with the XRK weapons bundle?

Will there be zombie's or some form of zombie mode

Does the precision edition come with a season pass or is that extra? It says full game but I'm not sure what that means.&nbsp;

Does the precision edition include multi languages?

how many gb does it take up

Is the game Multiplayer can u play wit friends too at home&nbsp;

Which edition do you recommend?

If I get the physical copy, will there be a download? And how much GB on the ps4?

Do you need to download updates to play the game, and if so, how big is the download?

If you are a fan of the Call of Duty franchise, check out all the latest Call of Duty: Modern Warfare games, accessories, and collectibles available at GameStop.