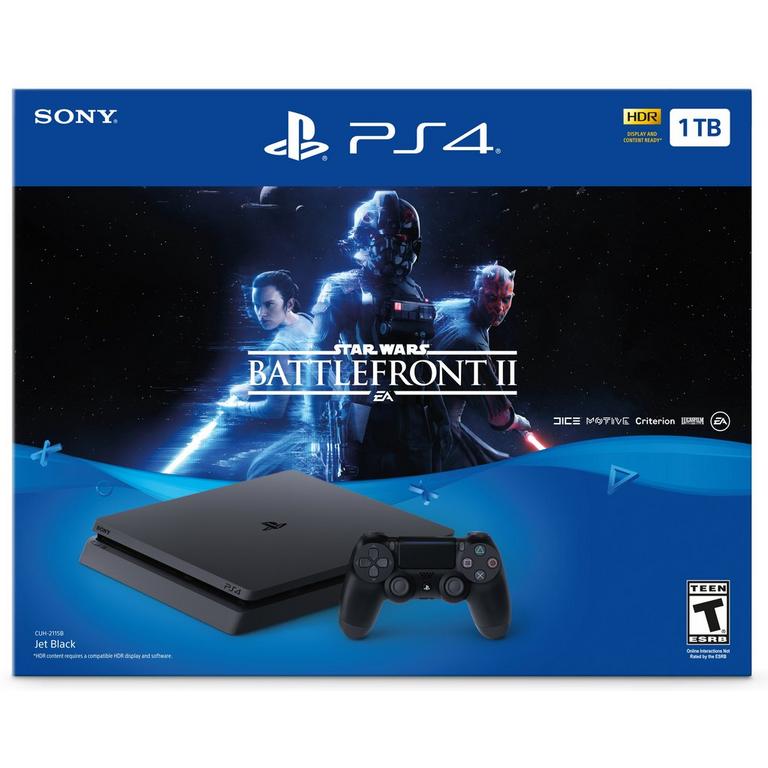 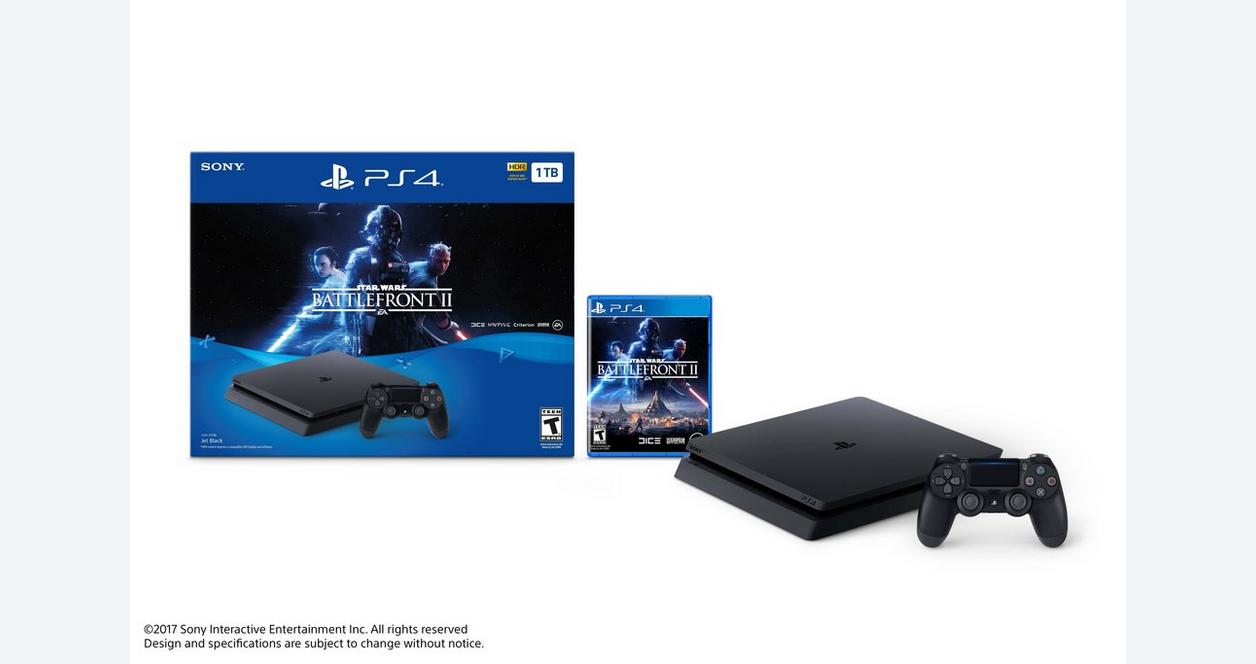 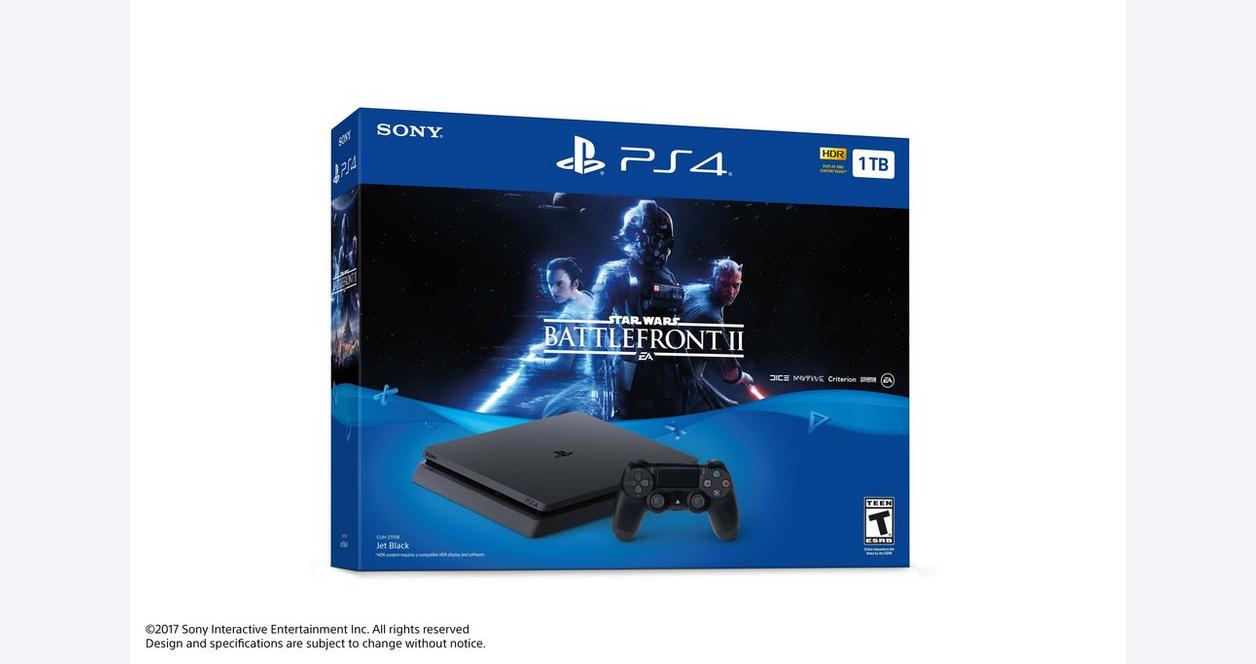 This bundle will vault you into the greate

Get it this way:
Free pick up at store with delivery@door
at
Out of Stock at .
Check other stores
Everyday Free Shipping $35+
DELIVER TODAY NEXT DAY
($8.99 FEE PER ORDER)
Learn more
Deliver to
Verify Address Change
Please provide your address to verify you are within our delivery area.
Select Condition For Availability
Buy Together

This bundle will vault you into the greatest galactic battles in the Star Wars universe. Featuring a Jet Black 1TB PS4 and a DUALSHOCK®4 wireless controller, there's no better place to be a hero and dominate the galaxy. Crush the Rebel Alliance, or fight for freedom from the Empire. Dismantle the Resistance, or protect it from the First Order. The choice is yours in an all-new playground of intense galactic struggle. From epic ground assaults to stunning vehicle play and heart-pounding aerial dogfights, dominate every game mode in battles that span across all eras of the Star Wars universe.

The slim PlayStation®4 system has a 1TB hard drive for the greatest games, TV, music andmore.

The biggest names of the gaming world come alive on PS4 like the breathtakingintergalactic warfare of Star Wars Battlefront II.

Something new and amazing is always in reach. Find what you're looking for and get it atthe touch of a button via PlayStation entertainment options like PlayStation Vue andmore2.

Embark on an endless Star Wars™ action experience from the bestselling Star Wars HDvideogame franchise of all time.

Rush through waves of enemies on Starkiller Base with the power of your lightsaber inyour hands. Storm through the jungle canopy of a hidden Rebel base on Yavin 4 with yourfellow troopers, dispensing firepower from AT-STs. Line up your X-wing squadron for anattack on a mammoth First Order Star Destroyer in space. Or rise as a new Star Wars hero–Iden, an elite Imperial special forces soldier –and discover an emotional and grippingsingle-player story spanning thirty years.

Experience rich and living Star Wars multiplayer battlegrounds across all three eras:prequel, classic, and new trilogy. Customize and upgrade your heroes, starfighters, ortroopers, each with unique abilities to exploit in battle. Ride tauntauns or take control oftanks and speeders. Down Star Destroyers the size of cities, use the Force to prove yourworth against iconic characters such as Kylo Ren, Darth Maul, or Han Solo, as you play apart in a gaming experience inspired by 40 years of timeless Star Wars films.You can become the master of your own Star Wars hero's journey.

Asked by: QuestionMan
The slim PlayStation&reg;4 system has a 1TB hard drive for the greatest games, TV, music and more
Answered by: fionita00

Asked by: Hhans
The PS4 pro is only for gaming and streaming but has awesome graphics, whereas, the PS4 is for gaming, as well as watching TV/YouTube.
Answered by: DolphinQu33n625_YT

I want to get my son a PS4 for Christmas &amp; I don't know much about video games,etc. I noticed there's more then 1 kind of PS4. I'd like to know which would be the best for him. (Slim,1TB,500GB.) He doesn't down- load many games at all. Please help me! Tha

Asked by: Soccermom1225
Always go with the larger space if you are able. Free PlayStation plus games are digital, so something to keep in mind because you will definitely need room for those. You also need room for game updates which are fairly frequent. Good luck!
Answered by: Starkiller24

I was wondering if the controller takes batteries or does it have a charger? Also if it does take batteries what kind

Asked by: Noah123
No batteries for this controller, it comes with a charging cable or you could use a phone charger. I use the cable for my galaxy.
Answered by: Ninjennga

Is the ps4 in the battlefront 2 package a ps4 slim or is it a regular ps4. I do not want the slim.

Asked by: Christjan
It is a slim, they have stoped making the regular ones. There is however, a ps4 pro version of this bundle
Answered by: ΔΡΞΧ_ZAID

Asked by: Alisa
Thank you for your question! Yes, this system is new.
Answered by: GameStopTeam23

Does it come with PlayStation plus

Asked by: Jacob estrada
No, playstation plus is a monthly or yearly subscription and is not part of this bundle.
Answered by: CT7567

Asked by: watergirl96
Yeah, only some are backwards compatible.
Answered by: Macaulay
PlayStation 4 Slim Star Wars Battlefront II Bundle 1TB is rated 4.2 out of 5 by 12.
Rated 5 out of 5 by Vandallfett from Starwars battlefront II Wonderful game great exclusive content. Plus the ps4 has always been a must have
Rated 5 out of 5 by Scrogs28 from Excellent game and phenomenal console! I've had the product for two weeks, and I am very pleased! Could not believe how quick I had received it! Excellent service.
Rated 5 out of 5 by Reviews89 from Smart Choice Excellent gaming system. It looks great on with any tv. The controller is great and the new joysticks feel great.
Rated 5 out of 5 by Barrettfam from Great gaming effects Bought as a Christmas gift and it did not disappoint.
Rated 5 out of 5 by Poodog2000 from Got an 2nd PS4 for Christmas this year for my children so they won't fight over one console, the 6 year loves the Star Wars game!
Rated 5 out of 5 by killalexx08 from Good price for console Bought it just for the console, i saved $50 and got a free game (:
Rated 3 out of 5 by DETH_CREED from Bought it just for the good looking exclusives that I can’t play on Xbox. Cool consol but I’d definitely recommend Xbox over any PlayStation consol. in an unrelated note it took GameStop a week alone to process my order and another week to ship it...
Rated 1 out of 5 by Capsule from Boring Bought it and played it for a few weeks but it wasnt very fun compared to other shooting or action games. Its basically just StarWars fan service...