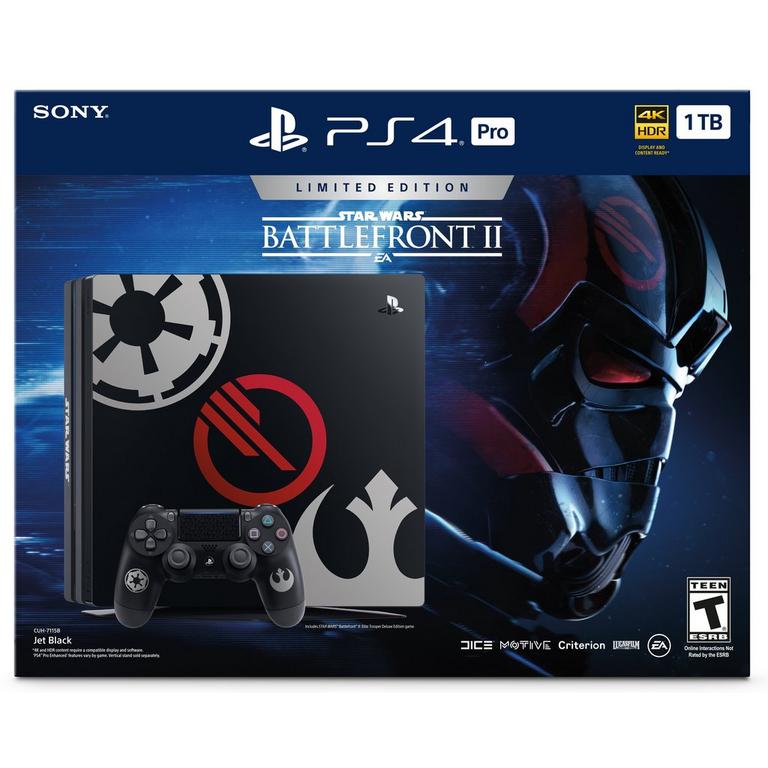 Limited Edition Star Wars™ Battlefront™ II PS4™ Pro Bundle This bundle will vault you into the greatest intergalactic battles in the Star Wars universe. Featuring a customized Jet Black 1TB PS4™ Pro and a matching DUALSHOCK®4 wireless controller, there's no better place to be a hero and dominate the galaxy. Crush the Rebel Alliance, or fight for freedom from the Empire. Dismantle the Resistance, or protect it from the First Order. The choice is yours in an all-new playground of intense galactic struggle. From epic ground assaults to stunning vehicle play and heart-pounding aerial dogfights, dominate every game mode in battles that span across all eras of the Star Wars universe.

The biggest names of the gaming world come alive on PS4 like the breathtaking intergalactic warfare of Star Wars Battlefront II.

Something new and amazing is always in reach. Find what you're looking for and get it at the touch of a button via PlayStation entertainment options like PlayStation Vue andmore2.

Embark on an endless Star Wars™ action experience from the bestselling Star Wars HD videogame franchise of all time.

Rush through waves of enemies on Starkiller Base with the power of your lightsaber in your hands. Storm through the jungle canopy of a hidden Rebel base on Yavin 4 with your fellow troopers, dispensing firepower from AT-STs. Line up your X-wing squadron for an attack on a mammoth First Order Star Destroyer in space. Or rise as a new Star Wars hero–Iden, an elite Imperial special forces soldier –and discover an emotional and grippingsingle-player story spanning thirty years.

Experience rich and living Star Wars multiplayer battlegrounds across all three eras:prequel, classic, and new trilogy. Customize and upgrade your heroes, starfighters, or troopers, each with unique abilities to exploit in battle. Ride tauntauns or take control of tanks and speeders. Down Star Destroyers the size of cities, use the Force to prove yourworth against iconic characters such as Kylo Ren, Darth Maul, or Han Solo, as you play a part in a gaming experience inspired by 40 years of timeless Star Wars films.You can become the master of your own Star Wars hero's journey.

PS4 Pro gets you closer to your game. Heighten your experiences. Enrich your adventures. Let the super-charged PS4 Pro lead the way.** 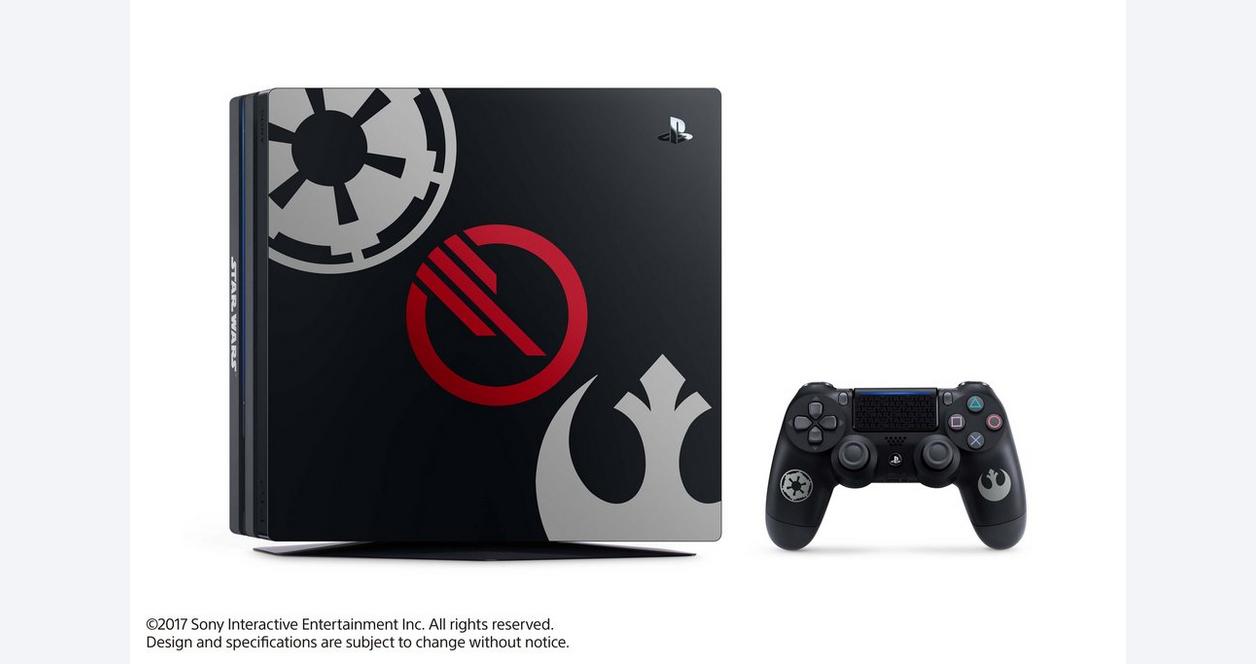 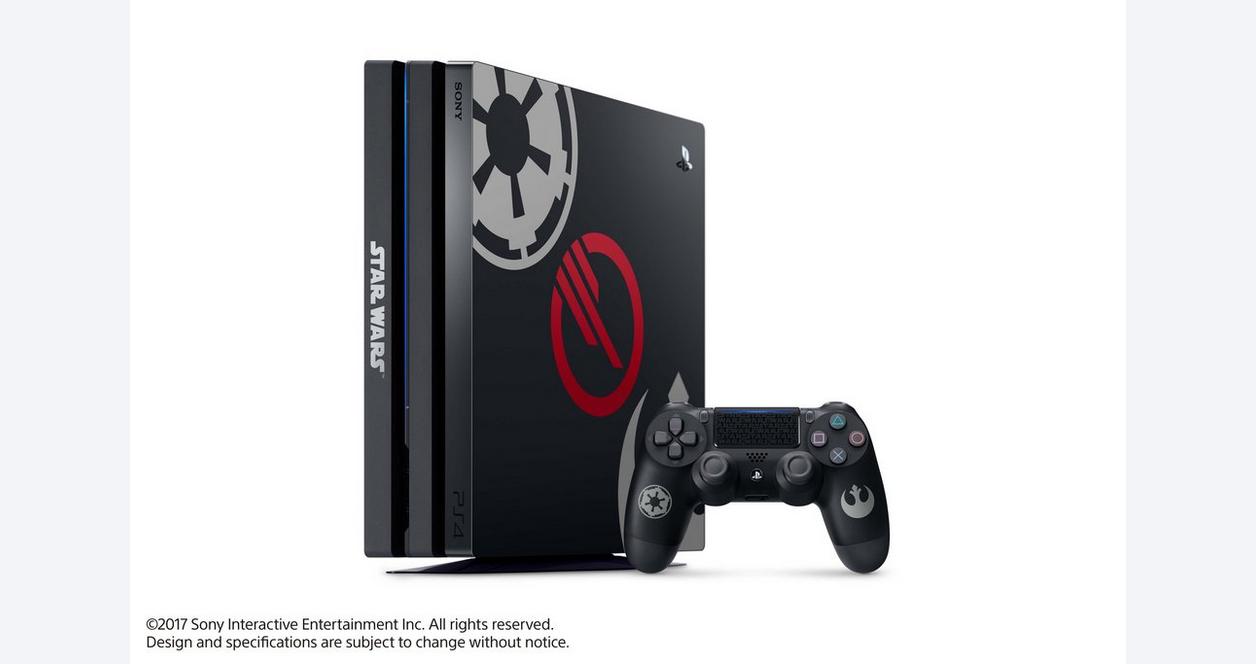 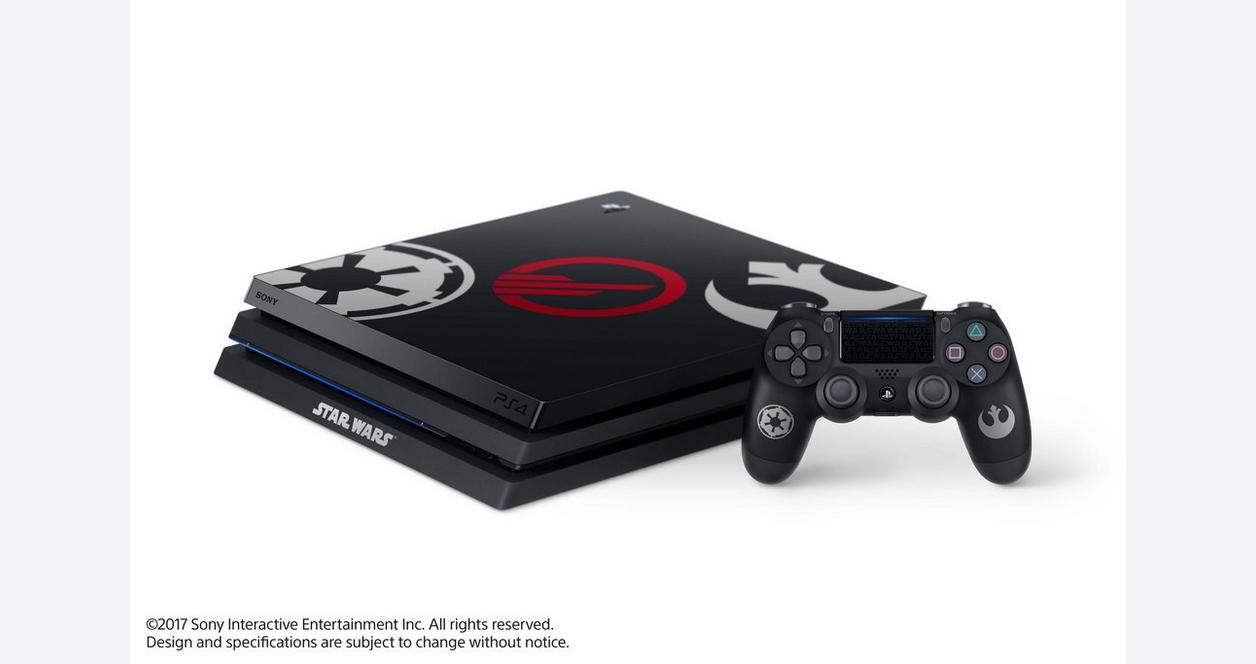 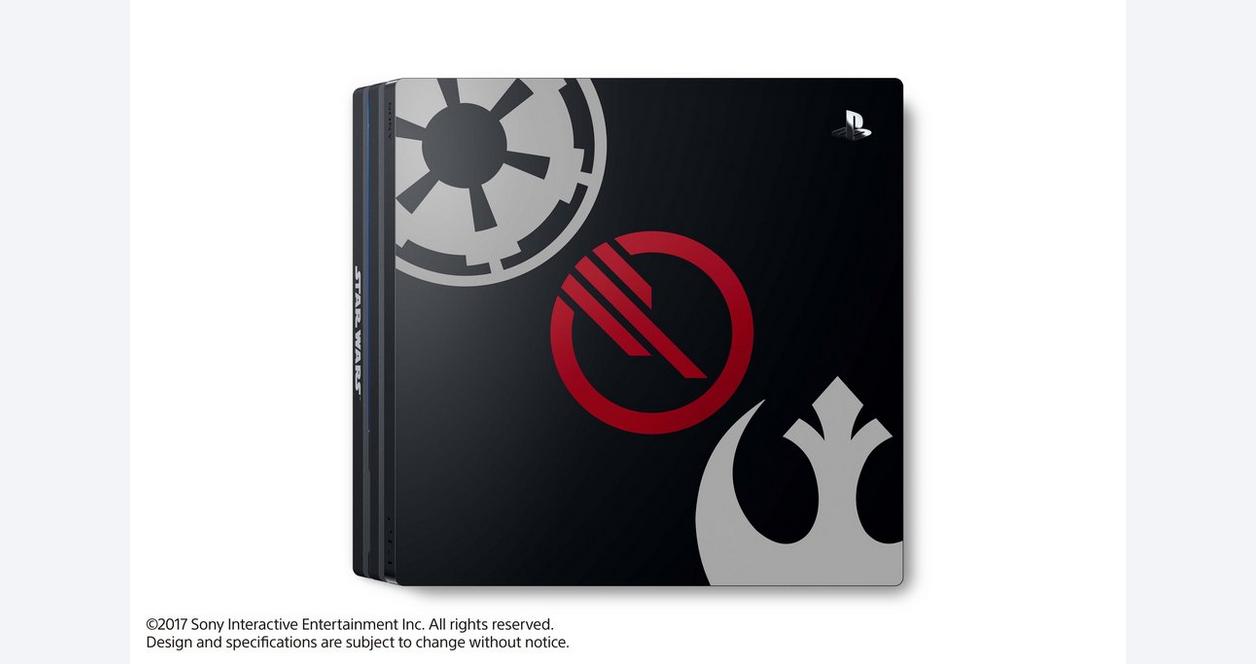 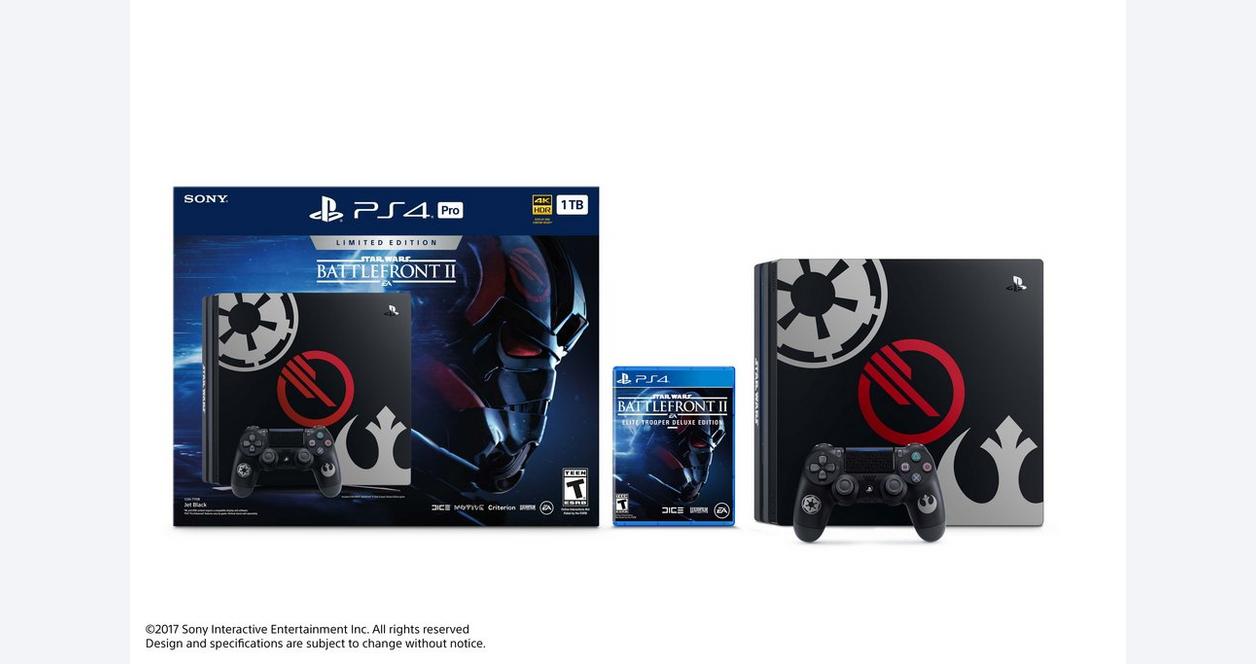 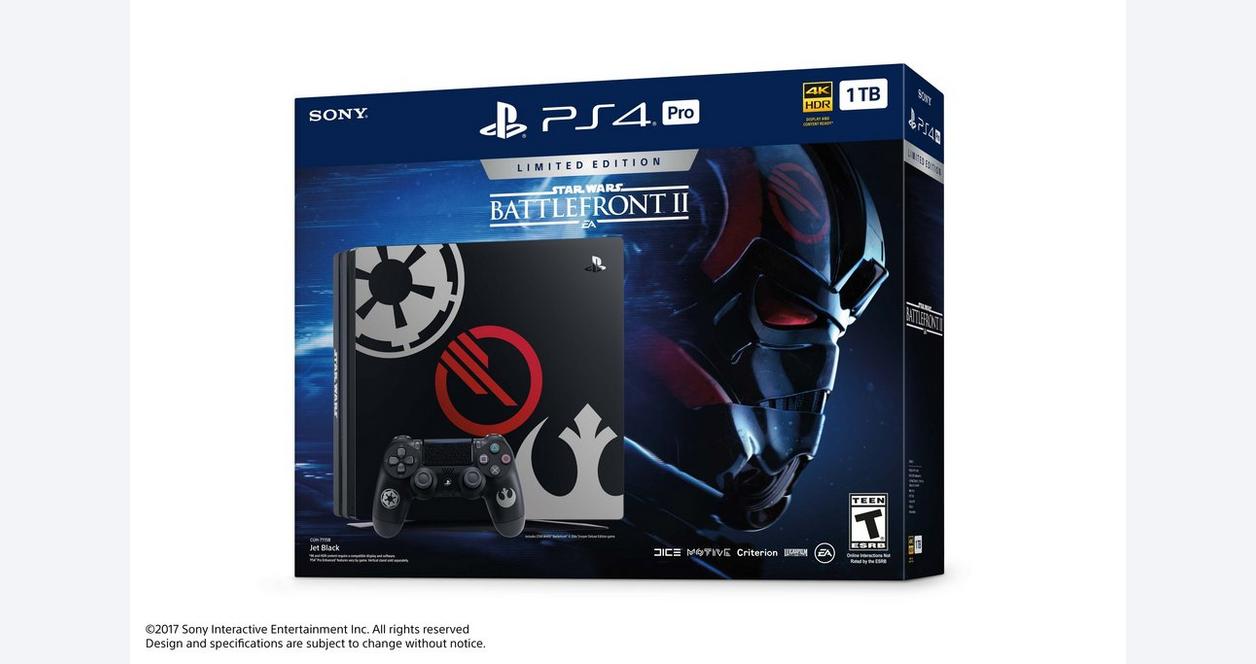 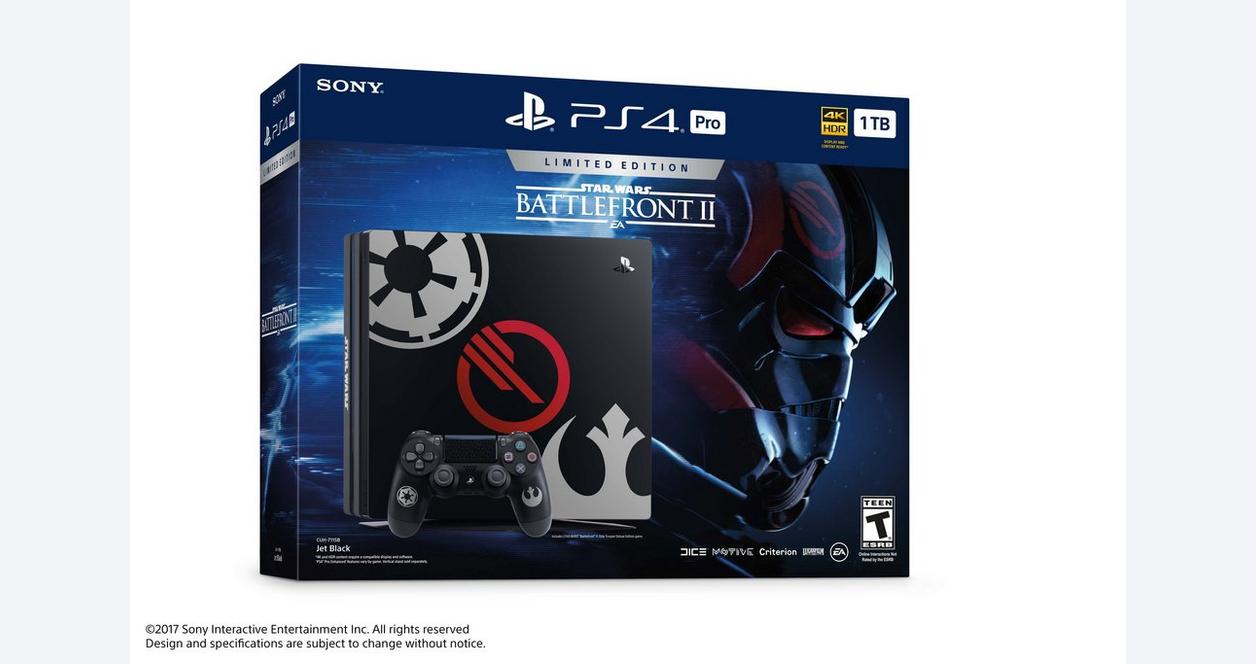 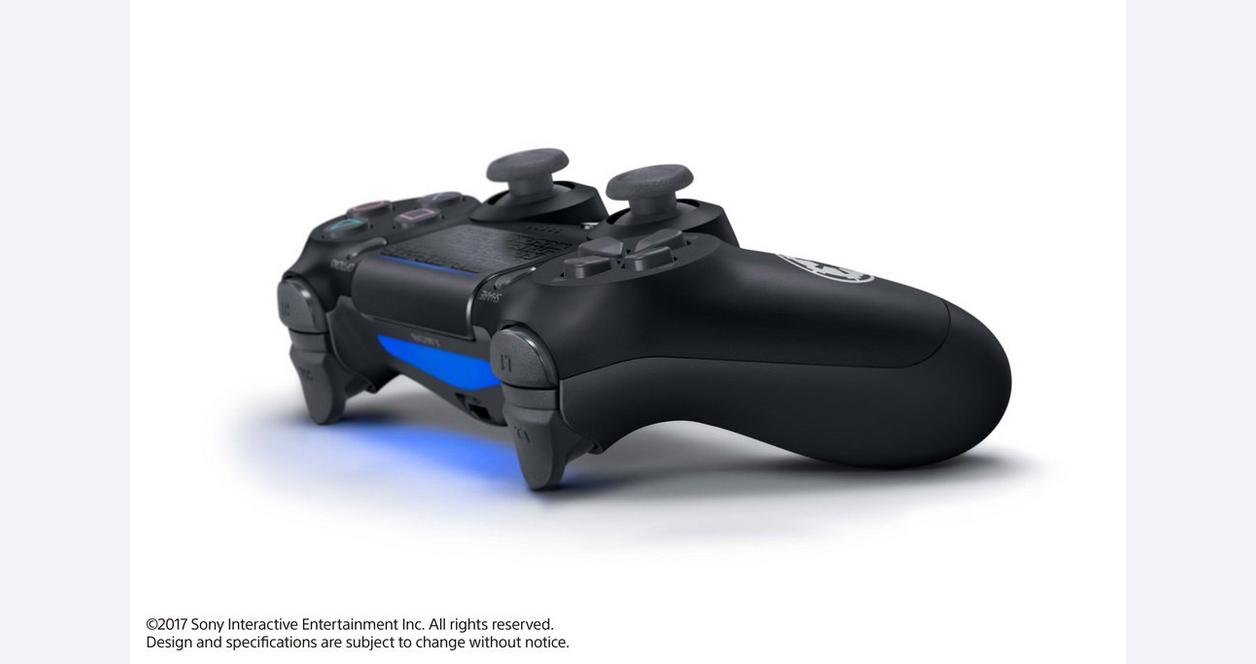 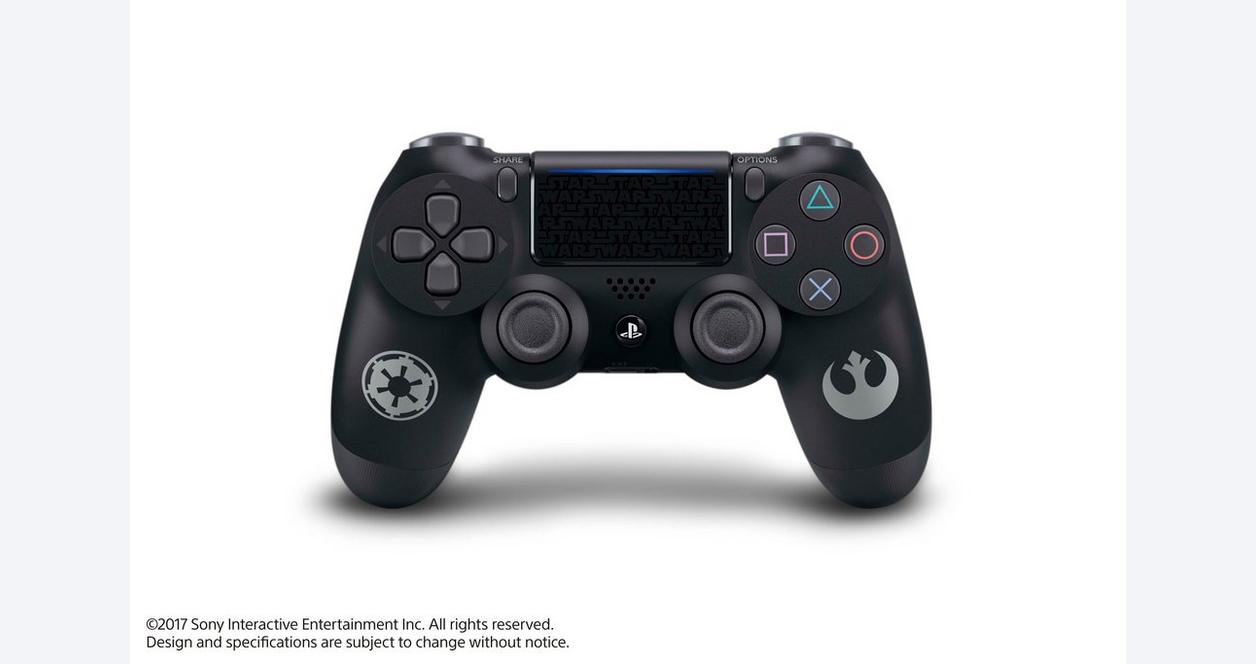 PlayStation 4 Pro Star Wars Battlefront II Limited Edition Bundle 1TB is rated 4.4 out of 5 by 32.
Rated 5 out of 5 by Brian marks from Best console by far Big Star Wars fan even bigger PlayStation fan love this limited edition is truly amazing
Rated 5 out of 5 by NBC23 from Ps4 pro starwars style Any starwars fan will love to add this to the collection
Rated 5 out of 5 by pappysir from great system Glad I got this system however Gamestop's website had very poor performance due to "long running scripts"
Rated 5 out of 5 by Pito79 from Well worth the money I always wanted a PlayStation, but was waiting for the right price, this one was great two games and lots of memory storage, a perfect 10 of a deal.
Rated 3 out of 5 by TheGodFather81 from Runs hot and is very laggy. Runs hot and is very laggy while you are on the home screen and running some of the games. Tried to have it replaced through GameStop but was told there are no more and I would have to just return it for a regular version. But the regular version and the limited edition Star Wars plus the game were the same price. So to go back to just the regular edition was a loss. I’ve adjusted settings and bought a stand with fans and still have the same lagging issues and has even froze up a time or two.
Rated 4 out of 5 by Dan160876 from Nice edition...but Good all knowwn PS$ Pro packed with a battlefront...BUT it could have come with TWO controllers instead of just one...
Rated 5 out of 5 by Midoki123 from It’s great! It came earlier than expected. It’s in great condition.
Rated 5 out of 5 by JimmySmokes213 from Awesome!!! It looks amazing on the Television. Doesn’t play 4K movies blue ray Awesome gaming system.

How big is the hard drive&nbsp;

Asked by: Rentsu
GET UP TO $350 CREDIT WHEN YOU TRADE YOUR XBOX ONE, PLAYSTATION 4, OR NINTENDO SWITCH SYSTEM TOWARD ANY NEW PLAYSTATION 4 PRO Offer valid 1/26/18 - 2/11/18. Valid toward purchase of a new PS4 Pro.
Answered by: AllStarFame

The price is the same if bought on line or at the store??&nbsp;

Does it come with a the physical game?

Does this console include a game of starwars?

Can we do a layaway plan at a local GameStop store?

Asked by: Joemerc76
Yes, but usually they&rsquo;re around the holiday times.
Answered by: Leafy

Does this include the game?

Asked by: Marteen
Yes! It's part of the bundle, not digital download but physical disc!
Answered by: Kylo Ren

Could I do layaway on this item? Also what's the difference between the pro 1 tb ps4 and just a regular 1tb

Asked by: CoyoteUgly
No layaway is not available from GameStop for any product. &nbsp;Pro is a better system and has a better processor and front end memory. &nbsp;The 1 TB is the hard drive size for saving games or movies. &nbsp;So the&nbsp;
Answered by: Lowery1029