Trade Value
Select Condition For Availability
Madden NFL 12 continues the rich tradition of the storied franchise by bringing fans closer to the NFL than ever before. Featuring all 32 teams, stadiums, and your favorite players in the league, Madden NFL 12 is True to the Game.

· All-New Collision System: Now maintain full control of players up to the point of impact – from tackling to blocking – providing the most authentic collisions in franchise history.&nbsp; This new system uses a player's momentum and over 100 new tackle animations, including 40 gang tackles, to provide more impactful hits, stolen tackles, and consecutive hit tackling.

· Advanced Defensive AI: Over 100 defensive A.I. enhancements resulting in the smartest Madden defense ever. Players in zone and man coverage will properly recognize and react to plays, including the ability to break out of assignments when appropriate, resulting in a defensive team that truly works together.&nbsp;

· Custom Playbooks: The #1 most requested feature by fans in recent years, allows you to build the ultimate game plan by modifying an existing playbook or creating your own by selecting up to 400 offensive or defensive plays from 75 different playbooks. Integrate your custom playbook into a game plan for use with the improved GameFlow system, which executes an authentic, situational game plan for you.

· Unprecedented On-Field Authenticity: Hundreds of visual improvements across all areas of the game including: new player equipment, helmet stickers, pylon and ball physics, a player degradation system that affects uniforms and helmets based on weather and field surface, 3D grass, and new player specific animations that showcase the personalities of each NFL player.

&nbsp;&nbsp;&nbsp;&nbsp;&nbsp; · Be a Superstar – Control the growth of your superstar thanks to an all-new progression system that allows you to earn skill points by participating in practice and games.&nbsp; The on-field experience is also enhanced by brand new position-specific coordinator audio that coaches your growth as an NFL player.

Madden NFL 12 is rated 3.7 out of 5 by 180.
Rated 1 out of 5 by jam0725712 from Ok s far Bought this game. Disc was damaged. Traded it in for a second disc and it also would not work. Because this location didnt have a thrid CD, I had to upgrade to Madden 15 in order to play a game.
Rated 5 out of 5 by Maddawg92 from I put The "Mad" In Madden! I Love This Game! I Played it for the first Time in my Life!
Rated 4 out of 5 by socks15 from Madden 12 This game has very good quality and all the players look the par so for any sports fans this is a good game to own
Rated 1 out of 5 by greatgta from THIS GAME SUCKS I wanted a good new madden game since i haven't bought a game since madden 09 , so i look around and the reviews said that this game was good, LIE, First off, The Career seems as if Ea spent 10 minutes on it , For one thing you automatically a starter, for people who play NCAA , or any other sports game you know what i mean by its fun to be on the road to being a starter but your automatically starter, also , if you carry over from NCAA 12 , ITS STUPID , in NCAA i won 2 Heisman and broke every quarterback record in my school and in NCAA records . all that and i'm selected in the 5th round . their is no effort on there part, also the franchise mode is also bad. The game play just feels awkward , the passing is weird, all the camera angles are just bad , everything about is bad, even the music track list sucks. if i was you i would go for either madden 13 or madden 25 because you will be miserable with madden 12
Rated 4 out of 5 by jag4life from Nice Game Madden 12 is definitely the best Madden Game so far. Franchise mode just hit an all time greatness, and the graphics are good. I don't have anything bad to say about this game at all.
Rated 4 out of 5 by Anonymous from Need better graphics Overall, I thought that the game was fantastic, need to fix some graphics though, also the glitch in the tackling.
Rated 5 out of 5 by Anonymous from Best Madden Ever! I have played Madden games all of my life, I have also played a ton of sport games, but this one is by far the best sport game ever! I love the commentators voices, and how EA sports has mastered the voices of the commentators. The graphics are the BOMB! The people on the teams look exactly like the real players. For only $15 for the used version, this game gives you bang for your buck!
Rated 4 out of 5 by Nesfelle from The usual Madden experience Madden 12 is pretty much just another chip off the old block. Not much of the content was new in this year's Madden, pretty much just updated rosters from the previous year. If you have played Madden 10 or Madden 11, then you pretty much know what you are in for. 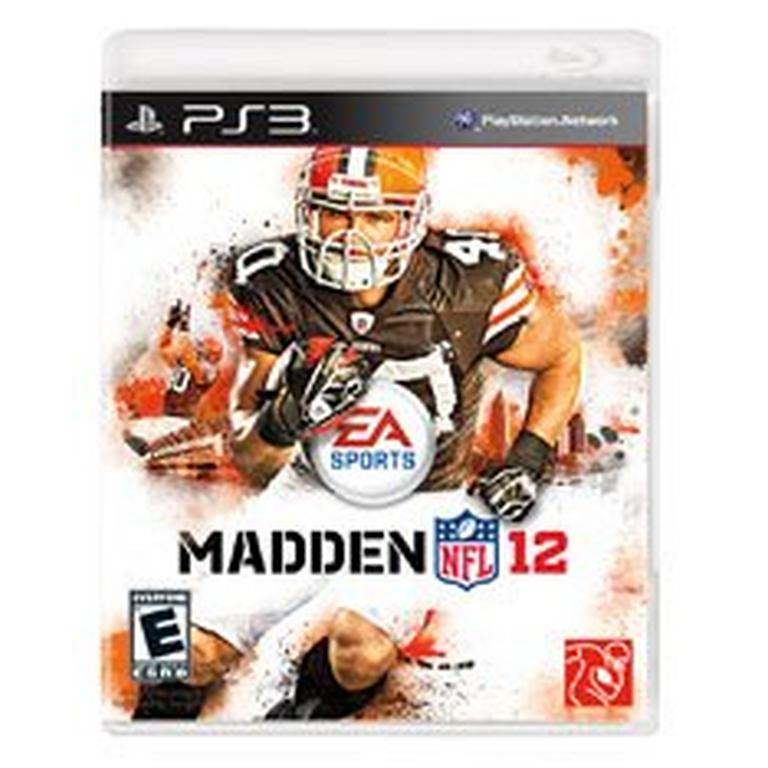