Get it this way:
Free pick up at store with delivery@door
at
No availability within 15 miles. .
Change Store
Free Standard Shipping $35+
DELIVER TODAY
(FREE on orders > $35!)
Learn more
Deliver to
Verify Address Change
Please provide your address to verify you are within our delivery area.
Select Condition For Availability
Buy Together
LEGO® Star Wars™: The Force Awakens™ marks the triumphant return of the No. 1 LEGO videogame franchise and immerses fans in the new Star Wars adventure like never before. Players can relive the epic action from the blockbuster film in a way that only LEGO can offer, featuring all of the storylines from Star Wars: The Force Awakens, retold through the clever and witty LEGO lens. The game will also feature exclusive playable content that takes players on adventures between Star Wars: Return of the Jedi and Star Wars: The Force Awakens, providing additional insight about the new movie and its characters.

New cover-based shooting and building options expand the scope of play and reduce the repetition we typically see in Lego titles. The open-world content is also quite good, giving players a mountain of secrets to unearth

A blast for Star Wars and Lego fans alike

I never thought I would say this, but Star Wars fans should play a Lego game for new Star Wars canon. After finishing up my playthrough of Lego Star Wars: The Force Awakens, I walked away with a better understanding of who Lor San Tekka is, and how he obtained the map leading to Luke Skywalker. I also learned more about two of Maz Kanata's patrons, and the vital role they played in thwarting the First Order's bid for galactic domination. The game also gives us a good look at Han Solo and Chewbacca's smuggling operations, and lets us play through their hunting expedition for the ravenous rathtars. C-3PO's red arm, Poe Dameron's rescue of Admiral Ackbar, and more dangling plot points are explained in fun adventures that are surprisingly faithful to the feature film's core content.

How faithful? Harrison Ford provides a wealth of new voice work, as does Carrie Fisher, Anthony Daniels, Daisy Ridley, Oscar Isaac, John Boyega, and Adam Driver. The content in this game is better than any deleted scene on the Star Wars: The Force Awakens Blu-ray, and is almost encyclopedic in how much of the film is explored. On top of the new story material, the game introduces a wealth of interesting characters and planets, and allows players to thoroughly explore locations that were only briefly shown in the movie.

The content is exciting to dive into, but temper your expectations; as true as developer TT Fusion is to the new Star Wars continuity, The Force Awakens is still a Lego game at heart, and it is every bit as silly and lighthearted as any Lego title before it. That means that Ford was brought in to voice lines about “wookiee cookies,” Chewbacca's favorite treat, which is referenced numerous times throughout the story. The First Order's prized stormtrooper army is composed of a bunch of slacking buffoons, more likely to be seen relaxing in hot tubs than doing their jobs correctly. The takeaway from one level is “I love seeing the rathtar's native habitat,” followed by “I don't think Han Solo would have used a mini Millennium Falcon to capture them.” The game strikes a nice balance between interesting and absurd Star Wars content, appeasing both fans of Star Wars and the Lego games at the same time.

The narrative structure is one of TT Fusion's best, taking the time to tell a story that people can follow, opposed to being just a collection of the highlights of the film, as we've seen in most of the studios' other titles. Some scenes are expanded, again with additional voice work from the cast, and others are altered for the sheer fun of interacting with Lego bricks.

PlayStation 4 and PlayStation 3 players will have access to exclusive downloadable content, the Droid Character Pack and the Phantom Limb Level Pack.

Get comprehensive coverage of the entire game and all Free Play content with the LEGO Star Wars: The Force Awakens Official Strategy Guide!

Trouble finding all the Gold Bricks? - Collect every Red Brick, Gold Brick, Character and more! Along with revealing collectibles level by level, this exhaustive guide also compiles every collectible into one easy-to-use chapter.

Having trouble Escaping the Finalizer? - Take a sneak peek inside the guide to learn how! 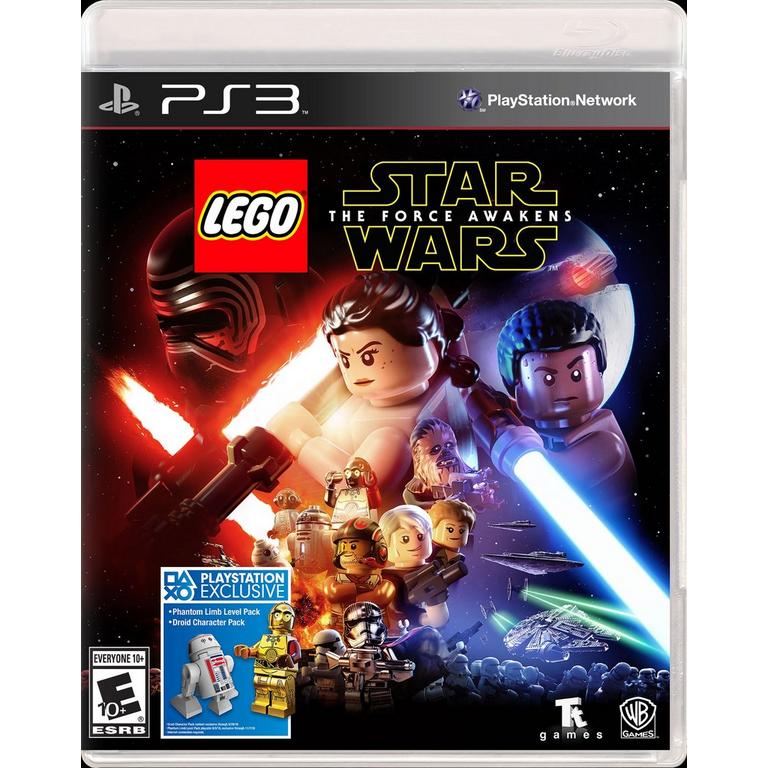