Blood and Gore
Intense Violence
Sexual Themes
Strong Language
Dishonored Game of the Year Edition is rated 4.1 out of 5 by 31.
Please Choose An Option

Blood and Gore
Intense Violence
Sexual Themes
Strong Language
Dishonored Game of the Year Edition is rated 4.1 out of 5 by 31.
Please Choose An Option

Universal
Buy Now
Dishonored is an immersive first-person action game that casts you as a supernatural assassin driven by revenge. With Dishonored's flexible combat system, creatively eliminate your targets as you combine the supernatural abilities, weapons and unusual gadgets at your disposal. Pursue your enemies under the cover of darkness or ruthlessly attack them head on with weapons drawn. The outcome of each mission plays out based on the choices you make.

Improvise and Innovate - Approach each assassination with your own style of play. Use shadow and sound to your advantage to make your way silently through levels unseen by foes, or attack enemies head-on as they respond to your aggression. The flexible combat system allows you to creatively combine your abilities, supernatural powers and gadgets as you make your way through the levels and dispatch your targets. Improvise and innovate to define your play style.

Action with Meaning - The world of Dishonored reacts to how you play. Move like a ghost and resist corruption, or show no mercy and leave a path of destruction in your wake. Decide your approach for each mission, and the outcomes will change as a result.

Supernatural Abilities - Teleport for stealth approaches, possess any living creature, or stop time itself to orchestrate unearthly executions! Combining your suite of supernatural abilities and weapons opens up even more ways to overcome obstacles and eliminate targets. The game's upgrade system allows for the mastery of deadly new abilities and devious gadgets.

A City Unlike Any Other - Enter an original world envisioned by Half-Life 2 art director Viktor Antonov. Arkane and Bethesda bring you a steampunk city where industry and the supernatural collide, creating an atmosphere thick with intrigue. The world is yours to discover.

The Knife of Dunwall - In The Knife of Dunwall, take on the role of Daud, the legendary assassin who killed the Empress. After assassinating the Empress, and forever changing the fate of Dunwall, you embark on a search for redemption. Gain access to Daud's new weapons, gadgets and supernatural abilities as you traverse through parts of Dunwall yet unseen, including the city's whaling center, Rothwild Slaughterhouse, and the heavily guarded Legal District.

The Brigmore Witches - Continue your journey as the legendary assassin, Daud, in The Brigmore Witches. This conclusion to Daud's story will put you at odds with warring gang factions and the dangerous Brigmore witch coven. Journey through undiscovered locales within Dunwall, including Drapers Ward and the Brigmore Manor, where you will be met with supernatural forces that test the limits of your new weapons and abilities.

Dunwall City Trials - In Dunwall City Trials, experience Dishonored's flexible combat system, stealth gameplay, and distinct settings in a whole new way as you make your way through 10 distinct maps that feature a variety of challenges. Put your stealth, combat and mobility skills to the test as you clear demanding objectives, unlock new achievements and secrets, and climb up the global online leaderboards.

What is included in the game of the year edition?

Asked by: fda53215
This complete compilation includes Dishonored, winner of over 100 Game of Year awards, as well as all of its additional content - Dunwall City Trials, The Knife of Dunwall, The Brigmore Witches and Void Walker's Arsenal.
Answered by: T_Bag9000
Dishonored Game of the Year Edition is rated 4.1 out of 5 by 31.
Rated 5 out of 5 by Michaelr1986 from Thumbs up. One of the best throwback games I've played in awhile.
Rated 5 out of 5 by Migi92 from Awesome game! I absolutely loved Skyrim and this one is so much like it. Loved it so much :)
Rated 4 out of 5 by AZscorpion from Great game and very fun! However... This is a great game as well as the add ons that come with it! I have fun every time I play this game! However, I do have to give it a bit of constructive criticism: For the game play, as great as it was, I personally would've put in the option to alternate from 1st person to 3rd person to add a bit more excitement to it. For the story line, they should have put in a voice for Corvo to go with the story line and to hear his thoughts, not only as a character, but also as a vengeful assassin or a man of justice. Also I thought it should have had more depth from the beginning, to middle; from middle, to end, and a plot behind each character as you go through game. The animations in the graphics were well connected, but there is that sense of realism missing toward them. Other than that, it's a great game, very fun to play, and it really brings the intensity through each mission.
Rated 5 out of 5 by Dethbot from I have no issues with the game at all. Just play the game and you'll see how awesome of an game it is. its the greatest stealth game ever made I've played through it at least 10 times.
Rated 4 out of 5 by Corvo203 from It isn't just stealth. Dishonored brings to the ps3 what previous games of the generation hadn't, a solid stealth game with an addictive storyline. Not quite linear yet not quite sandbox, Dishonored's campaign felt smooth and well thought out, and strategic maneuvers on the players part felt rewarding. One of my personal favorite games, I could praise this title for hours on end, especially the GOTY edition. for seven dollars more, the expansion packs add a little more to do once the game is complete, and once it is, it's great because you're left begging for more. New dishonored comes out 2016, so play it now and get ahead of the bandwagon.
Rated 5 out of 5 by iamDTS from A Stealth Game That Defined This Generation I would say that the PS3/360/PC/Wii Generation was lacking of Stealth games. Dishonored comes out full steam ahead with multiple play styles mainly all stealth, just a killing spree or a mix of both. If you are going to buy this game i recommend buying the GOTY Edition instead of just the base game because buying the Game+ DLC seperate already costs more than the GOTY version. Plus you get a cool poster with it.
Rated 3 out of 5 by Anonymous from Fun at first It's really fun at first but after awhile, the story starts lacking and the gameplay is very repetitive.I personally do not enjoy the game. The DLC was decent-ish but it still had the repetitive feel.
Rated 5 out of 5 by SmokeTheirGraves from BEST GAME EVER Dishonored. Do I really have to say it. Great game. Great graphics. Awesome story. And way better than all the Call Of Duty combined.

Dishonored Game of the Year Edition 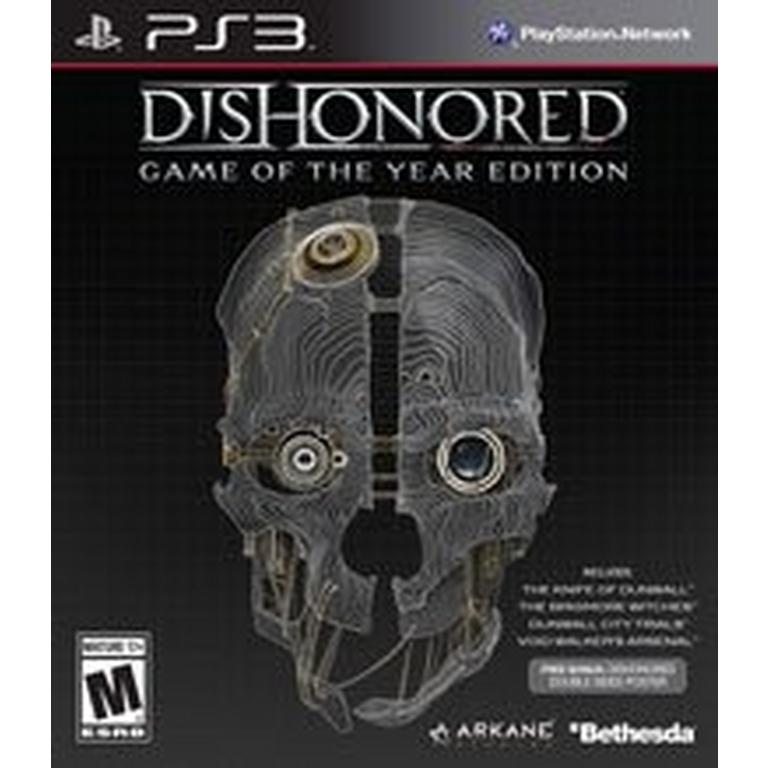 Dishonored Game of the Year Edition