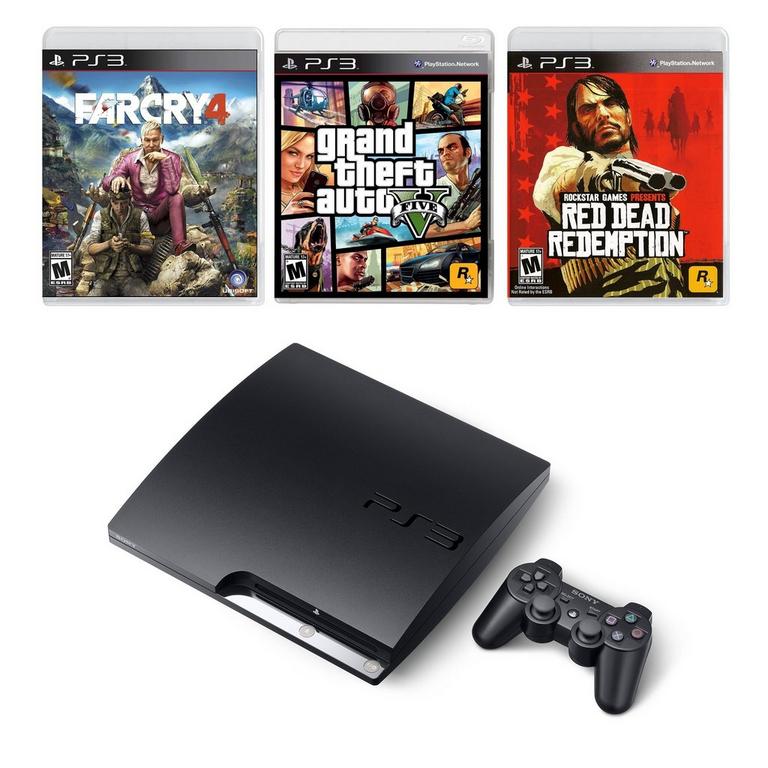 The PS3 system is now slimmer and lighter than ever before. While the form factor may have changed, the PS3 system still comes with free access to the PlayStation®Network, built-in Wi-Fi, and hard disk drive storage for games, music, videos, and photos. Plus, the PS3 system is the only gaming console with a Blu-ray player to give you the best high-definition viewing experience on your television. With five times the capacity of standard DVDs, Blu-ray discs gives you more realistic and immersive gameplay that can only be possible on the PS3 system with games such as Gran Turismo® 5, Uncharted 2: Among Thieves, and MAG.

A young street hustler, a retired bank robber and a terrifying psychopath must pull off a series of dangerous heists to survive in a ruthless city in which they can trust nobody, least of all each other. Los Santos: a sprawling sun-soaked metropolis full of self-help gurus, starlets, and fading celebrities, once the envy of the Western world, now struggling to stay afloat in an era of economic uncertainty and cheap reality TV. Amidst the turmoil, three very different criminals plot their own chances of survival and success: Franklin, a former street gangster, now looking for real opportunities and serious money; Michael, a professional ex-con whose retirement is a lot less rosy than he hoped it would be; and Trevor, a violent maniac driven by the next big score. Running out of options, the crew risks everything in a series of daring and dangerous heists that could set them up for life. The biggest, most dynamic and most diverse open world ever created, Grand Theft Auto V blends storytelling and gameplay in new ways as players repeatedly jump in and out of the lives of the game's three lead characters, playing all sides of the game's interwoven story. All the classic hallmarks of the groundbreaking series return, including incredible attention to detail and Grand Theft Auto's darkly humorous take on modern culture, alongside a brand new and ambitious approach to open world multiplayer. Los Santos and Blaine County The largest open world yet in a Grand Theft Auto title, spanning vastly diverse cultural and geographical areas - the entire world of Grand Theft Auto V is open from the very beginning of the game to explore. Visitors to the greater metropolis of Los Santos and the countryside of Blaine County will encounter faded celebrities, party people, hikers, bikers, and every other manner of colorful denizen. You'll be able to traverse everywhere from the tops of the mountains, through the streets of Los Santos and to the depths of the ocean floor. Heists Petty crimes, hustling, and stealing cars can only get you so far in Los Santos. To score big, Michael, Franklin and Trevor will work together to pull off grand Heists - big, multi-part missions that require careful preparation, recruiting, and precise (and often explosive) execution. Cash is king in GTAV and while there will be plenty of ways to acquire and spend it - heists are the way to earn the big bucks. 'Recreational' Activity The open world of Grand Theft Auto V is not just massive in scale, but will offer more to get into than ever before. For recreation, play a bit of golf or tennis, zen out with some yoga or cycle through the countryside. For adrenaline heads, parachute over the city, or customize your Cheetah and take it to the streets to race suckers for money. Or earn cash the old fashioned way, by taking it - whether by ripping off liquor stores or by buying and taking over businesses that will earn you dividends. Even minding your own business having a stroll you may meet one of Los Santos' weirdos or starlets and find yourself off on a wild misadventure you never expected.

Winner of over 100 Game of the Year awards including Spike Video Game Awards, Machinima Inside Gaming Awards, GameSpot, Games Radar, Spin, CNET, Associated Press and NY Post. America, 1911. The Wild West is dying. When federal agents threaten his family, former outlaw John Marston is forced to pick up his guns again and hunt down the gang of criminals he once called friends. Experience an epic fight for survival across the sprawling expanses of the American West and Mexico, as John Marston struggles to bury his bloodstained past, one man at a time.

Hidden in the towering Himalayas lies Kyrat, a country steeped in tradition and violence. You are Ajay Ghale. Traveling to Kyrat to fulfill your mother's dying wish, you find yourself caught up in a civil war to overthrow the oppressive regime of dictator Pagan Min. Explore and navigate this vast open world, where danger and unpredictability lurk around every corner. Here, every decision counts, and every second is a story. Welcome to Kyrat. SEQUEL TO THE #1 RATED SHOOTER OF 2012* 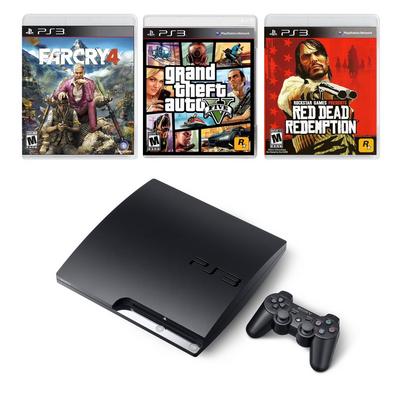