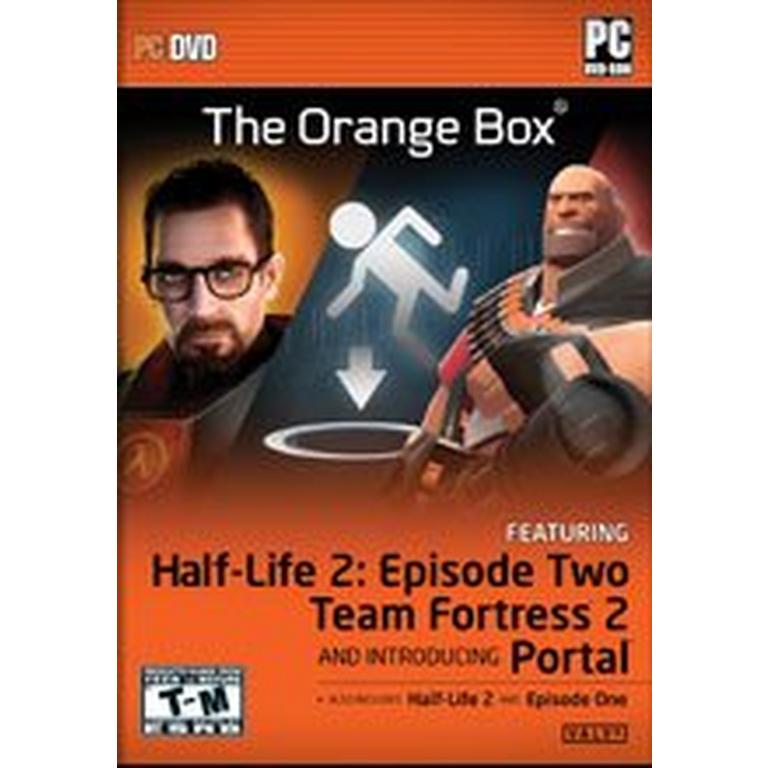 It all started in 1998. Half-Life sends a shock through the game industry with its combination of pounding action and continuous, immersive storytelling. Valve's debut title wins more than 50 game-of-the-year awards on its way to being named “Best PC Game Ever” by PC Gamer. Flash forward almost ten years later. The critcal acclaim has yet to stop. Now, The Orange Box delivers five innovative action games from Valve– creators of the blockbuster Half Life franchise, in one box. The Orange Box includes Half Life 2: Episode Two, Portal and Team Fortress 2 in addition to full versions of award-winning Half Life 2 and Half Life 2: Episode One for an engrossing first-person action experience.
More Details Less Details

Half-Life 2-
The player again picks up the crowbar of research scientist Gordon Freeman, who finds himself on an alien-infested Earth being picked to the bone, its resources depleted, its populace dwindling. Freeman is thrust into the unenviable role of rescuing the world from the wrong he unleashed back at Black Mesa. And a lot of people he cares about are counting on him.

Half-Life 2: Episode 1-
Stepping into the hazard suit of Dr. Gordon Freeman, you face the immediate repercussions of your actions in City 17 and the Citadel. Rejoin Alyx Vance and her robot, Dog, to once again aid the human resistance in their desperate battle against the totalitarian alien menace of the Combine. Episode One exposes Alyx's combat skills and knowledge of City 17 as the player battles side-by-side with her in this 4-6 hour adventure of greater density and detail than non-episodic releases.

Portal-
The game is designed to change the way players approach, manipulate, and surmise the possibilities in a given environment; similar to how Half-Life 2's Gravity Gun innovated new ways to leverage an object in any given situation.Players must solve physical puzzles and challenges by opening portals to maneuvering objects, and themselves, through space.

Half-Life 2: Episode 2
As Dr. Gordon Freeman, you were last seen exiting City 17 with Alyx Vance as the Citadel erupted amidst a storm of unknown proportions. In Episode Two, you must battle and race against Combine forces as you traverse the White Forest to deliver a crucial information packet stolen from the Citadel to an enclave of fellow resistance scientists.

Team Fortress 2-
Unlike other “class-based” games that offer a variety of combat classes only, Team Fortress 2 packs a wild variety of classes which provide a broad range of tactical abilities and personalities, and lend themselves to a variety of player skills. Play as the flame-throwing Pyro, the room clearing Heavy, or the Spy, a master of disguises. Other classes include: Scout, Sniper, Medic, Engineer, Demoman, or Soldier.

All new games in The Orange Box are:

Half-Life 2 The Orange Box is rated 4.8 out of 5 by 12.
Rated 5 out of 5 by iKratos from The Best Game Ever. Period. I have to fill up this blank because I've already said all you need to know. Well... Half Life 2 is easilly one of the best games of our generation. Half Life 2: Episodes 1 and 2 continue the story ark and provide more sweet, sweet Half Life. Portal is a puzzler that will capture your heart (and melt your mind). Team Fortress 2 is my personal favorite - VALVe is a bunch of risk takers, that is for sure. THEY PAID OFF IN SPADES. WITH SOLID GOLD CROWNS. RIDING UNICORNS. ON FIRE. IN SPAAAAAAAAACE. This game went free back when Meet the Medic came out. GET IT. YOU SHOULD NOT EVEN HAVE TO THINK ABOUT THIS.
Rated 4 out of 5 by PartyPoison from Great Games I bought the orange box and i love. Team fortress 2 is my favorite game but portal and half life are both great games. Portal 2 is out now and is also definitively worth checking out. Team fortress 2 is a must have but instead of buying it here, its free on steam.
Rated 4 out of 5 by CinereuS from Great games! All of these games are some of the best. Half Life 2 Episode 2 is somewhat short, however that fact is greatly overshadowed by it's wonderful gameplay and storyline. Portal is also like this, but, Portal, unlike Half Life 2 Episode 2, is more of a puzzle game than action. You use portals to solve complex puzzles. While both of these games are great the first time, neither of them are very good for playing multiple times, because, once you complete all the puzzles and such, it isn't very enjoyable to play it again. And, while there is no multiplayer in either of these games, Team Fortress 2 is all about mutliplayer. Team Fortress 2 uses a class based system to make sure that players use teamwork to complete different objectives agaisnt an enemy teams. Some of these classes are the Medic, Scout, Demoman, and Spy. Since each one of these classes specialize in an ability, teamwork is essential. Graphics and gameplay are great in all 3 of these games, and would highly reccomend them to any audience.
Rated 5 out of 5 by mario3585 from Best game package ever, nothing more. Thiese games are AMAZING, tf2, portal, and hl2, ARE THE BEST GAMES EVER MADE!!!
Rated 5 out of 5 by siebs42 from best bundle ever made 3 of the best games ever made in one bundle is the best thing ever portal is a perfect stratagy game team fortress 2 is just plain multiplayer fun half life 2 is AMAZING
Rated 4 out of 5 by Cesspool from Alot of bang for your buck first you have half life 2 and all the exp i wont lie i didt get far there but it was fun and challenging just reinstalled it then theres portal anyone and everyone should play that the concept is amazing and fun then you got team fortress 2 /facepalm havent touched that yet either :O i know writing a review when i have such little in game play tisk tisk but! its a great bundle and its fun stuff so get it
Rated 5 out of 5 by ctjedi52 from Great Deal This gives you so much in one pack. Portal is amazing and is just really fun to mess around in and is still worth it even though it has shorter campaign. Half-Life is revolutionary and the campaign is worth the value and has great controls for the PC. The icing on the cake is Team Fortress 2. TF2 is a great game and you can play hours on end playing this on Steam with your friends and with all these games being updated constantly you will not have to upgrade to a new version any time soon. The cons are that you need to have an internet connection to play this game ,but frankly don't buy it then. You can only install it once with the disc, but if you upgrade your computer you have it attached to Steam you have it on any computer with Steam. Valve is a dedicated developer and they listen to their fans. What you get is creative inuative games that are balanced and fun online with amazing campaigns.
Rated 5 out of 5 by ummmmm from great this whole game is great only problem i have though is half life 2 and portal get boring after a while 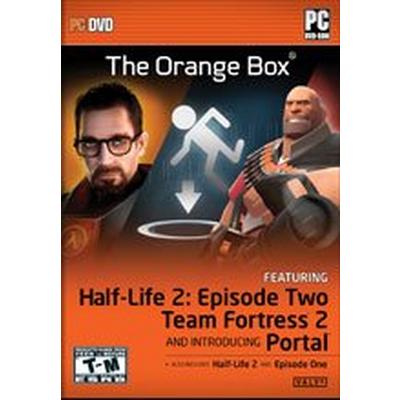