Far Cry is set in a future that features exciting new elements and 3D worlds set in both vast detailed outdoor and indoor areas. Far Cry showcases the latest AI and physics technologies to recreate the most believable character movements, as well as realtime 3D atmospheric sound rendering, weapon bullets and footsteps as if you were there, in the game.
More Details Less Details

A tropical paradise seethes with hidden evil in Far Cry, a cunningly detailed action shooter that pushes the boundaries of combat to shocking new levels.

Venture through an utterly realistic tropical island, with no limits placed on where you can go or how far you can see. Become embroiled in a thriller movie-style storyline, controlling one man in a bid to escape from the island with his life. Encounter and defeat highly intelligent enemies in stunning tropical locations, as you jump into a game world modeled to an unparalled level of detail - with next generation physics-on-demand and a view distance of over half a mile.

The CryENGINE comes complete with all of its internal tools and also includes the CryEDIT world editing system. Licensees receive full source code and documentation for the engine and tools. Support is provided directly from the R & D Team that continuously develops the engine and can arrange teaching workshops for your team to increase the learning process.

The engine supports all video and hardware currently on the market. New hardware support is constantly added as it becomes available.

CryEDIT: Is a real-time game editor offering What you see is what you PLAY feedback.

Network Client and Server System: Manages all network connections for the multiplayer mode. It is a low-latency network system based on client/server architecture.

Terrain: Uses an advanced heightmap system and polygon reduction to create massive, realistic environments. The view distance can be up to 2km when converted from game units.

Tools Integration: Objects and buildings created using 3ds max™ or Maya® are integrated within the game and editor.

Polybump: Standalone or fully integrated with other tools including 3ds max.

Scripting system: Based on the popular LUA language. This easy to use system allows the setup and tweaking of weapons/game parameters, playing of sounds and loading of graphics without touching the C++ code.

* Unparalled long range gunplay: Battle to the ends of the earth with Far Cry's utterly unique, 800-meter scalable view system. Lock into enemies from a distance with motion-sensing binoculars. Then choose your style of attack - from long range sniping to ballistic close-quarter firefights - and everything in between.

* Cunning and complex artificial intelligence: Gameplay never becomes repetitive with units including snipers, stalkers, scouts, and grenadiers engaging you from all angles, distances and terrains in coordinated strikes. Commanders will even call for reinforcements by land, sea or air.

Far Cry is rated 3.7 out of 5 by 3.
Rated 4 out of 5 by HappyGoLucky2099 from Truly An Exceptional Game To Play Introduction: in Far Cry, you play as Jack Carver, a guy who's been hired to sail a mysterious woman around the Pacific. However, Jack's ship suddenly comes under attack. After washing ashore on a tropical island, sans the mysterious woman, Carver must investigate his surroundings so that he can find her and eventually rescue her from an army of heavily armed mercenaries. Game play: during this game you’ll get to drive different vehicles. For every mission you have several numbers of ways to finish it, that’s what I love about this game. You can almost go anywhere, however the level of interactivity is low, especially when compared with Half-Life 2. There is a breath meter, which keeps decreasing as you get tired while running or run out of breath while swimming. The mercenaries are tough and will attack you with a strategy. So be careful and you’ll have to use stealth at times rather than being RAMBO!! The game’s A.I is horribly tough and I doubt if any can finish the game in the last mode (there are Different modes of difficulty in this game) it’s just something realistic. The Binoculars are very handy because it helps you to locate the position of your enemies and keep a track on them. The game has many cool guns all are good especially the MP5 and the sniper. Sniper fans won’t be disappointed. They’ll just be happier because you can zoom more when lying down to take a nice head shot. Graphics: the sceneries are awesome; you’ll love the surroundings, but don’t forget that you are not on a HONEY MOON. Any ways the mercenaries won’t let you have one. The game has a long single loading screen during the start of every mission and there are no quick saves. Even though it is a 2004 game it has graphics that are clear and expectable for today’s standards. It’s just one of the best graphics game to play of it’s genre. Sound: the game has really good sounds and music effects. I decided to turn off the music when I played because I could hear the movement of the mercenaries walking and talking even before they appeared on the screen. Conclusion: overall it’s an awesome game, but it’s tough. But do yourself a favor just get the game and start playing you’ll love it.
Rated 5 out of 5 by FallenCrisis from You can't beat a classic Far Cry is a big leap into open world havock, of course the game is dated due to the fact that it was released more then 5 years ago but the fact is that this game was a future look into what open world games would be like. Since its one of the first in its class there are some bugs but you can barley notice them. The game play is very good, but the AI makes it suffer a bit. You can shoot someone with a silenced machiene gun but all the AI within 20 ft of the target will notice you. The difficulty setting surpasses call of duty, it only takes a couple of shots to die and it takes some well placed shots to kill the AI. There is a lot of action in the game and although some of the tribal theme song kills it when you are playing but the phisics help out a bit. You can take some trucks and gliders in the game, but you spend most of your time in a cave. The story is great till the end, you kinda feel like you were slapped in the face but its a funny thing. Anyway if you want it then you made a good choice because its a great classic. 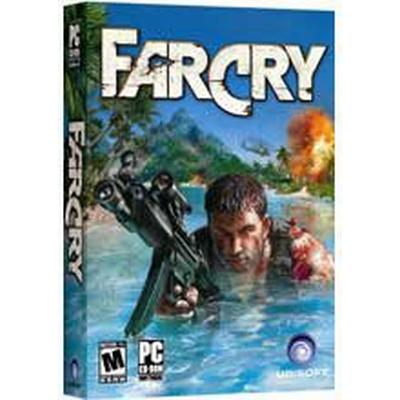