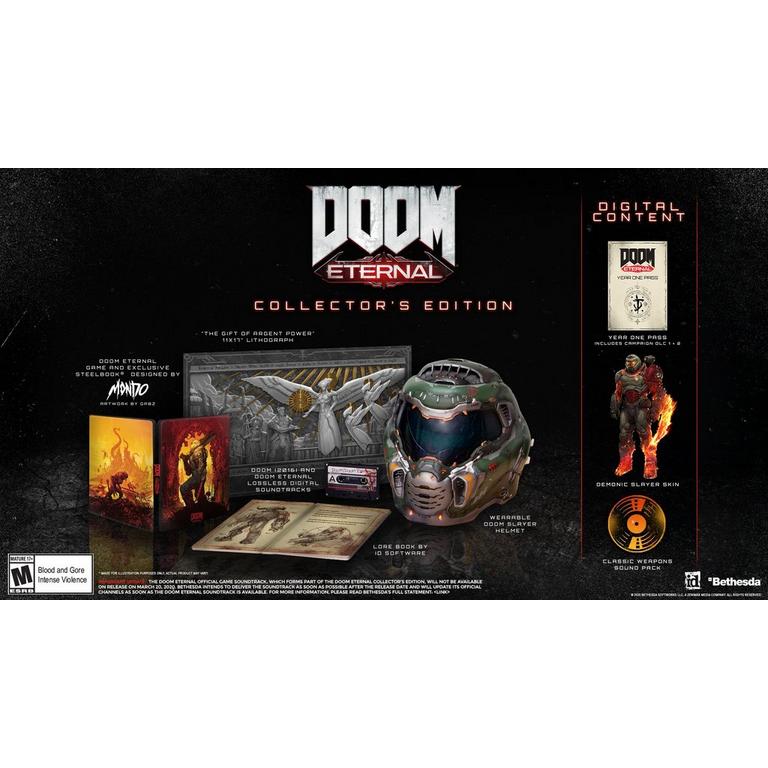 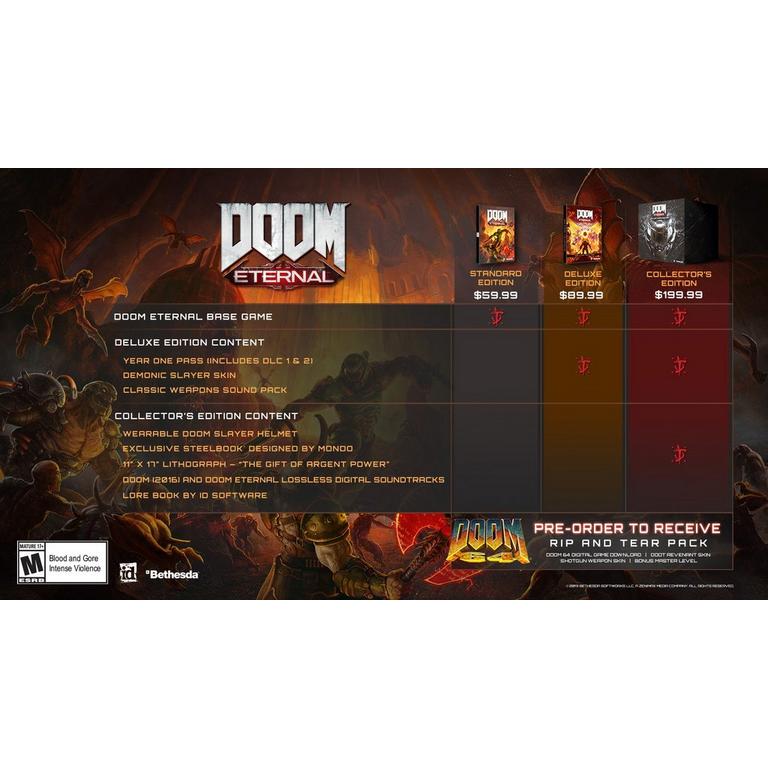 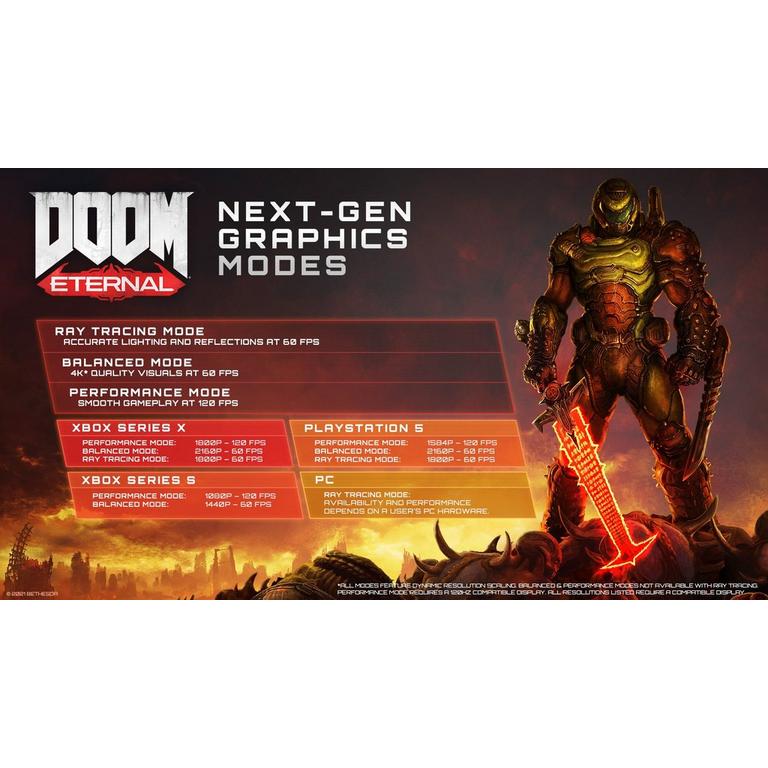 Developed by id Software, DOOM® Eternal™ is the direct sequel to DOOM®, winner of The Game Awards’ Best Action Game of 2016. Experience the ultimate combination of speed and power as you rip-and-tear your way across dimensions with the next leap in push-forward, first-person combat. Powered by idTech 7 and set to an all-new pulse-pounding soundtrack composed by Mick Gordon, DOOM Eternal puts you in control of the unstoppable DOOM Slayer as you blow apart new and classic demons with powerful weapons in unbelievable and never-before-seen worlds. The ultimate bundle for any DOOM fan, the Collector's Edition contains a Deluxe Edition copy of DOOM Eternal and an incredible assortment of goods highlighted by a wearable DOOM Slayer's helmet - a sight that makes Hell itself shudder in fear!

As the DOOM Slayer, you return to find Earth has suffered a demonic invasion. Raze Hell and discover the Slayer’s origins and his enduring mission to rip and tear…until it is done.

The standalone official game soundtrack for DOOM Eternal will not be completed by 3/20/2020. Bethesda will notify you when it is available for download.

Rip. Tear. Celebrate. Doom Eternal is an FPS feast that bombards players with adrenaline-soaked excitement and ridiculous amounts of gore. In this direct continuation to 2016’s reimagining of Doom, developer id Software plays the role of angel and devil, empowering the legendary Doom Slayer with more might, while simultaneously giving the demons more hellish ways to inflict pain. This clashing of titans is a spectacle to behold. Explosions and guts soar across the battlefield as heavy metal pounds to the carnage. No matter who is left standing, the player is the beneficiary of the series’ best combat, which hits an exhilarating fever pitch.

The game roars at a smooth clip and looks devilishly good. The forces of evil are shredded in extreme detail

Mick Gordon’s soundtrack is heavy, yet the beats are catchy. The double bass also lines up with the player’s heartbeat when the fights get bloody

New weapons and enemy types add significant layers of complexity to the combat. It’s fast, fun, and loaded with variety

DOOM Eternal Collectors Edition is rated 4.5 out of 5 by 716.
Rated 2 out of 5 by Edo77 from Not terrible, not great either I pre-ordered it, picked it up upon release and played for about three hours. It's boring and repetitive. Constant resource farming is annoying and the platforming is over used. It doesn't feel like Doom. It's overhyped. I, II, and 2016 are a lot better. Eternal was a disappointment for me.
Rated 3 out of 5 by Jcjf from Disappointed 2016 was better. I’m a bit of a completionist and I didn’t even play eternal all the way through. I probably will at some point but I was disappointed. Multiplayer severely lacking at launch but may get more diverse. Graphically impressive though.
Rated 1 out of 5 by GinDallas from A waste of money! They should rename this game “Tarzan’s Exploits" because of all of the hopping, swinging, and jumping that’s involved...all of which is very difficult and frustrating, even at the easiest difficulty setting. The problem is, if you don’t master it, you don’t progress. Such was my plight. I got through, probably, what I estimate to be a quarter of the game, and had to quit because it lost all of its enjoyment. Some developer, a frustrated gymnast, no doubt, must be very proud of himself for designing all of the difficult and pervasive “monkey moves“...really dumb!
Rated 3 out of 5 by Smithnya from An ok game. Not good. Not bad. It's just an ok game. There are better shooters out there.
Rated 3 out of 5 by Source from Alright game It’s alright, not the best but still a good game, don’t see what people are raving about
Rated 5 out of 5 by RossPoulin from Wonderful, smooth, brutal Let's just start by saying that this is a fantastic, exhilarating, and brutal FPS. As someone who had not gotten into DOOM before this, I was a little concerned with what I would think, but I loved it. I'll break it down into a few categories: Gameplay, Story, and Aesthetic. Gameplay: This game is so incredibly fluid. The controls make it easy to bounce around the battlefield and destroy demons every step of the way. It's easy to change between weapons, use equipment, and chain together attacks to wipe out the demon hordes. The bosses are challenging, the secrets are fun to find, and slayer gates provide a unique challenge with a promise of reward upon the completion of them all. The only downside that I found is how intense it can be. It's a game that I enjoyed playing for a couple of hours, taking a break, and coming back to, as opposed to grinding it all out in one take. That's just personal preference of a casual gamer though, your experience may differ. 9/10 Story: As I said, this was my first DOOM experience so I didn't know if I would be engaged, but I loved it. The amount of lore hidden around the world was amazing, and truly brought the player into the world of the Slayer. I know some people disliked the use of cut scenes in this game, but I thought they were a pleasant respite from the action and helped to flesh out the story, especially if you didn't feel like reading all of your Codex entries mid-game. The Fortress of Doom also made the character feel more real than I was expecting. 10/10 Aesthetic: Beautiful, brutal, grisly fun all around. Being able to see the damage done to individual demons is incredibly cool, and adds a pseudo-health bar that is so unique. the environments are massive and well thought out. I truly enjoyed looking at this game as I played it and took time to take in the scenery. Plus the music is so intense and perfect for the feel of the game. 10/10 Overall, this is a fantastic game, well worth the money, and has huge replay value as you try to collect everything, play with the cheat codes, and master the game. 9.5/10
Rated 2 out of 5 by maxwellhouseman67 from What happened to game play difficulty Very disappointed in this DOOM game and sad because loved the other doom games for PS3 and PS4. What happened to this one. I don't mean such as the game play but what happened to the difficulty level? On the easiest difficulty I feel like I'm playing it on the hardest as pumping ammo into the easiest enemies and takes them forever to go down. I will keep the game for now but done playing unless they get some updates going to fix the game play the way it should be
Rated 4 out of 5 by Barbariankitty from *shrug* Campaign was great, not as good as Doom 2016, but still great. Multiplayer fell flat for me, only one mode and it wasn't very good.

For digital download, where do we enter our key? The key I was sent does not work with Steam and there are no instructions as to where I should redeem it in the email.

Asked by: Revenos
The code will require you to download and install the Bethesda launcher. The same thing happened to me with Rage 2.
Answered by: ThatGuySanto

Is this for Steam or the Bethesda Launcher?

Asked by: SuperShotgunGod
The code I got was only for the Bethesda launcher
Answered by: JIian1

So, does this game have multiplayer?

Asked by: hobbybobby686868686
Yes it will have multiplayer&nbsp;
Answered by: Avenged GC

Will the pc version still come with the steel book?

split screen muti-player yes or no?

Asked by: Grahamcracker
no split screen but there is multiplayer
Answered by: JTdollarbills

Whats the difference between the standard and the deluxe addition?

Asked by: Robbbbbbbbbbbbb
The deluxe edition comes with the year pass which gets you access to the dlc that comes out on this year and also the demonic Slayer skin, while the standard is just the game.
Answered by: SoupySoup

Will the PC version come with a digital code for the game as well as the disc?

will there be any restocks for the collectors edition for xbox one ? 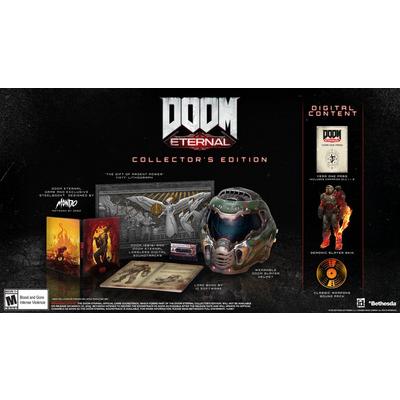 If you are a fan of Doom Eternal, check out all the latest Doom Eternal games available at GameStop.