The Wonderful 101-Nintendo Wii U Alcohol Reference
Animated Blood
Fantasy Violence
Suggestive Themes
The Wonderful 101 is rated 4.5 out of 5 by 30.
Please Choose An Option

Alcohol Reference
Animated Blood
Fantasy Violence
Suggestive Themes
The Wonderful 101 is rated 4.5 out of 5 by 30.
Please Choose An Option

Trade Value
Strength in Numbers Earth is under attack from an invasion of enormous aliens, and the only Read More
Please Choose An Option

Trade Value
Select Condition For Availability
Strength in Numbers Earth is under attack from an invasion of enormous aliens, and the only thing that can protect the planet is a group of unlikely, yet mighty, heroes with special abilities. Unfortunately, the aliens are too powerful for the heroes to fight individually. They must join forces and work together to defeat their common enemy. These uniquely different heroes can morph into powerful weapons to crush the invaders or turn into objects like a giant fist or bridge to interact with and traverse the environments.

Called to stand against an overwhelming enemy, 100 heroes wield the ultimate weapon: Uniting together. Combining their strengths and their very bodies into massive weapons, they can pulverize Earth's invaders with giant fists, swords, and more, transforming to take on any challenge. However, they need one more hero to help Wonder-Red lead all the others: you!

To combat an intergalactic threat, these elite heroes have been strategically deployed all over the world. They have endured the most rigorous training to ready themselves for war. Seeking neither personal fame nor accolades, the Wonderful 100 have sworn never to reveal their true identities.

The heroes join together, transforming into many powerful forms.
They deploy their secret weapon against all invaders—the Unite Morph!

The most powerful heroes bring special Unite Morphs to the battle. Each hero leads with unique strengths to provide advantages that thwart different types of foes.

Wonderful Missions take you through a series of challenging, action-packed stages for up to five players*—or one lone hero. Each player leads a Hero Team into a battle of epic proportions.

The young leader of the Wonderful 100, Will Wedgewood is a primary school teacher, but when he's called into action he dons his CENTINEL-Suit and transforms into the superhero Wonder-Red! He wields the Vulcan Knuckles. While he's generally a polite fella, he's also very determined – which has gotten him into trouble a few times before…

Hooker's a hot-headed detective with the Los Angeles Police Department. In his head he's the typical action hero – cool with an endless supply of one-liners – but that's far from true. His prized Valiantium Blade is said to become sharper with every slash.

There aren't many shooters as sharp as Wonder-Green. He might seem flippant on the surface, but he's a young man with a deep sense of responsibility. With his beloved gun, it's said he can shoot the fleas off a dog's back at 500 yards.

If it's acrobatics you want, Wonder-Pink can deliver: this Olympic athlete is unmatched in her field, yet somehow still finds time to stay on fashion's cutting edge. Enemies suffer by her Beautiful Whip, made of the newly-developed Belmont alloy.

There are more Wonderful Ones to discover on your quest to save Earth. Once recruited, they'll stick with you for the rest of the game, so search high and low to add them and their talents to your roster!

Destroyers of worlds. Obliterators of solar systems. The GEATHJERK have tried to consume Earth once before, but were stopped by the anti-invasion hyper plasma shield known as the “Margarita”. Now, with even more incredible mechanical weapons and countless different alien races in their ranks, they have returned – and only the Wonderful 100 can stop them.

Collect precious O-Parts during levels then spend them in the Wonderful Mart to purchase helpful items, and even upgrade or unlock Unite Morphs. Rumour has it the shop sells even more incredible abilities, but they remain shrouded in secrecy…

The Wonderful 101 is rated 4.5 out of 5 by 30.
Rated 4 out of 5 by Mad Dog Billy from Wonderful 101 An excellent roller coaster ride similar to Viewtiful Joe!
Rated 5 out of 5 by Prino78 from A Platinum Games Gem Fun game with interesting gameplay. This game was different than anythimg i played prior and i really enjoyed it. There is a learning curve but i think it is worth taking the time. Once you get it, it is fun. Also, this game uses the gamepad really well, which turns out to be a real strength of the game. Most games hardly ever bothered, which is a shame. If you still own a WiiU, this game is a worthwhile play.
Rated 5 out of 5 by JMDurden from The shining hidden gem of the Wii U The Wonderful 101 is a fantastic video game that, sadly, fell to the wayside due to both being on a console that under-performed and being a new IP that was tricky to put your finger on at first glance. Developed by PlatinumGames, this video game is essentially the love child of director, Hideki Kamiya's, previous games mashed together into a single one. The art direction that's very similar to Viewtiful Joe, a combat system that's similar to his more well known titles like Devil May Cry and Bayonetta, and a drawing system evoking the brush system in Okami. All of these things wouldn't be expected to come together, especially the Okami drawing mechanics, but they do. Granted, this is a game that takes a bit to get used to. If you're simply expecting this game to be something that you pick up and completely understand within a few minutes, or even the first hour, then this isn't the type of game for you. This game can be best described, combat-wise, as a "series of clicks" where you start to understand various forms of how the game wants you to play it. It offers tutorials at various points, but these are never in your face and are meant to only guide you just enough to where you can dig through the amount of depth the game has to offer to you on your own. I'd describe this game as having a bit of a higher skill floor than something like Bayonetta, but a pretty insane skill ceiling akin to a lot of the titles PlatinumGames has been known to produce. There's very few games like this out there that combine character action with resource management, fun platforming segments, an enjoyable story, and some varying diversions of mixed quality. Is the game perfect in everything it sets out to do? No. It'd be wrong to say that the game is perfect, but for what it is trying to be, it's an amazing experience and not one worth missing. If you own a Wii U and are already familiar with PlatinumGames' previous titles or their more recent offerings and are interested in playing something else that you might have not, then there's no higher recommendation that I can give for The Wonderful 101. It's a blast from beginning to end and a game that you should not miss. Still hoping for that Switch port. Unite up, Wonderful Ones!
Rated 1 out of 5 by NahSon from NAH SON It's hard to see where your character is while playing this game. The direction stinks. Don't even think about trying to play with a pro controller, you'll wanna smash your head against the wall, then set your Wii U on fire. I have one word to describe this game: NAH.
Rated 5 out of 5 by Wonder Racer from It is Criminal This Game Soid so Bad This game rocks without any question. There is no reason why anybody who has a Wii U doesn't own this. Hopefully it gets ported to the switch soon so more people can experience the brilliance that Platinum games achieved with this game. Game play is solid with you making different sized drawings on the screen to use powers. The enemies are good with a fantastic rival character. The main group is fantastically written and voiced well. Some of the camera angles are a bit off but other than that very few complaints. Again IF YOU HAVE A WII U BUY THIS!!!!!!!!!!
Rated 4 out of 5 by MrMegaManFan from Hard to play but fun anyway The controls are a little difficult on the Wii U touch screen but the game is charming.
Rated 5 out of 5 by M Magee from 3rd best Platinum game on Wii-U Need I say more? Seriously though, if you’re a fan of Bayonetta or Platinum in general, it’s a recommendation that doesn’t need a second thought. The control scheme might take some getting used to, but it’s fun once you get the hang of it.
Rated 5 out of 5 by skm1134 from Must have for Wii U Original title made by Platinum only playable on Wii U because of the game pad integration. 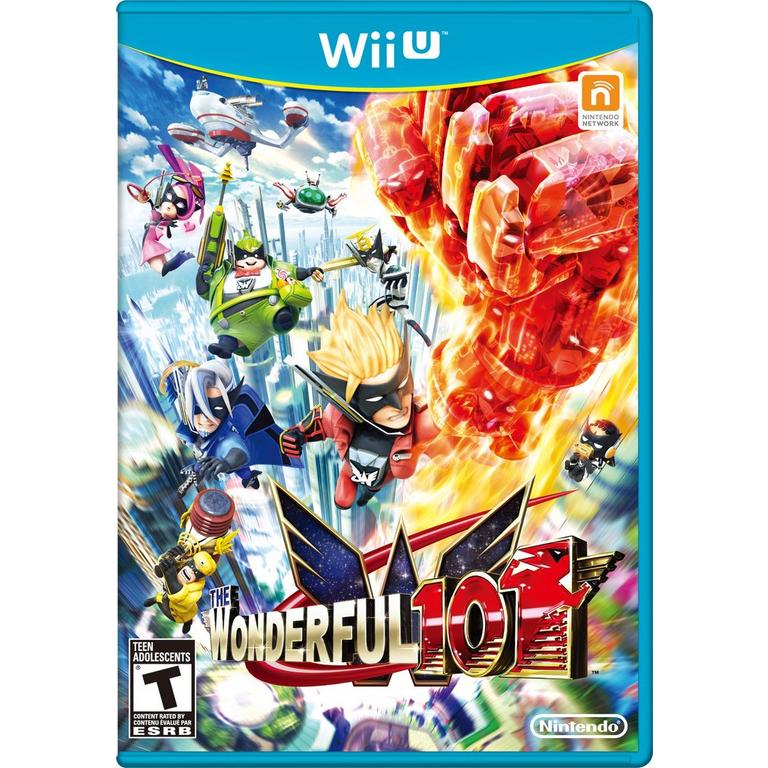