The Nintendo Wii U 32GB Blast from the Past Adventure Bundle includes:

The Nintendo Wii U Blast from the Past 32GB Adventure Bundle includes:

It's an entirely new system that will change the way you experience entertainment. For the first time, experience your favorite Nintendo worlds in crystal clear high definition.

Avengers Assemble! The best-selling LEGO Marvel videogame franchise returns with a brand new action-packed, Super Hero adventure. LEGO Marvel's Avengers features characters and storylines from the critically-acclaimed film Marvel's The Avengers and the smash hit sequel Marvel's Avengers: Age of Ultron, as well as playable content based on additional Marvel Studios blockbusters, including Marvel's Captain America: The First Avenger, Iron Man 3, Thor: The Dark World and Captain America: The Winter Soldier. Play as Earth's Mightiest Heroes in their quest to save the world.

The Legend of Zelda: The Wind Waker HD

The Legend of Zelda: The Wind Waker makes its glorious return on the Wii U console with gorgeous HD graphics and enhanced game features. In this timeless classic with a unique and colorful "toon-shaded" art style, players guide Link as he sets out on the massive Great Sea to find his kidnapped sister. Players will sail the seas in search of lost islands, fight fearsome enemies, take on mighty bosses and seek out the legendary Triforce.

Nintendo Wii U 32 GB Adventure Blast from the Past GameStop Premium Refurbished System Bundle is rated 4.5 out of 5 by 2.
Rated 4 out of 5 by Navyblue from Customer service improved. The bundle shipped was broken, gamepad had 2 bad buttons, the systems disc reader was broken & the system constantly froze. I went to my local gamestop by cal state san bernardino & they swapped it out for me. Ended up buying a warranty for peace of mind.
Rated 5 out of 5 by Shawna McComas from Great place to shop from Product was refurbished but looked brand new. Shipping was fast so my son was able to get it for Christmas. Thanks so much!!!!

Does the console come with the power supply? 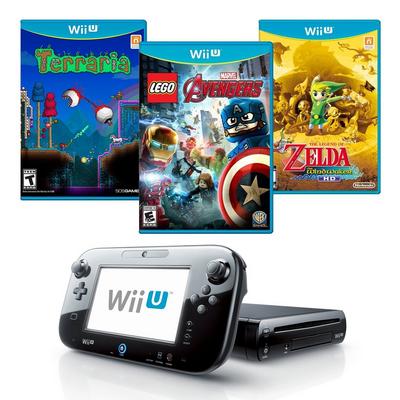