Metroid Prime 3: Corruption set a new standard for first-person motion controls in video games. Now it's bringing those controls to the rest of the celebrated series, allowing players to experience the entire Metroid Prime story arc with the peerless precision of the Wii Remote. Nintendo announces Metroid Prime Trilogy, a new premium three-game collection for the Wii console that bundles all three landmark Metroid Prime games onto one disc and revamps the first two installments with intuitive Wii Remote controls, wide-screen presentation and other enhancements. Each game maintains its original storyline and settings, but now Metroid Prime and Metroid Prime 2: Echoes lets you use your Wii Remote to aim with precision as heroine Samus Aran. Based on the breakthrough control system that debuted in Metroid Prime 3: Corruption, these new Wii controls bring an entirely new level of immersion and freedom to these milestone games

The first entry into the Metroid Prime Saga stayed true to the unique exploration system of the original Metroid game for the NES system, expanding the map area as players find new abilities and adding a host of revolutionary new features. Metroid Prime added new elements like the dynamic feeling of FPS battle, puzzle-solving, with various visors and weapons. A beautiful art style, alternating first-person and morph ball views, and an immersive storyline. In doing so, Metroid Prime created a brand new genre – The first-person adventure. Metroid Prime still stands up several years later as an incredibly immersive gaming experience, and now by adopting unique Wii controls while keeping the incredible gameplay from the original Nintendo Gamecube version, it is even more fun to play. Additionally, now that players can select an easier difficulty level, it is a great entry point for first-time Metroid Prime: Trilogy Players.

In this sequel, Samus heads to Aether, a planet torn into light and dark dimensions by a mysterious meteor. A vicious alien race from Dark Aether called the Ing are threatening the Luminoths of Light Aether with extinction. On this planet, Samus makes first contact with a creature called Dark Samus who looks just like herself. What is Dark Samus's objective? What is the relationship between Samus and Dark Samus? Can Samus defeat Dark Aether and rescue Light Aether? Puzzles in each dimension affect the other, and while players try to solve them, they must battle against creatures from each dimension by switching between different beams. Dark Aether is cloaked in poison, and its denizens can appear at any time in Light Aether to cause havoc. Metroid Prime 2: Echoes is packed with brand-new gameplay elements – including the only Metroid Multiplayer in the trilogy, which supports four players and is made even better with the addition of Wii controls for the release of Metroid Prime: Trilogy.

The final chapter of Metroid Prime: Trilogy includes not only improved control with the Wii Remote but also use of the accelerometer in many places, like swinging the Nunchuk controller forward to attach the grapple beam to a door or an enemy's shield, and pulling back to pull off the grapple item or operating machines with gestures of the Wii Remote. In Metroid Prime 3: Corruption, Samus explores multiple planets to save the universe from an even more powerful Dark Samus and Phazon Contamination. As Phazon starts corrupting Samus, she utilizes it to enter Hyper Mode, which temporarily increases Samus's strength, but can also shorten her life. By working together with the federation, can Samus save the universe from Dark Samus? As she tries, she'll come in contact with other bounty hunters for the first time in this Trilogy.

Metroid Prime Trilogy is rated 4.7 out of 5 by 88.
Rated 5 out of 5 by Casualsabotage from Great game but very rare An amazing collection for a very good and convenient price. Hard to find but worth picking up.
Rated 1 out of 5 by Derek T from Metroid Trilogy not compatible with controllers. Only used with Wii remote and nunchuck. I liked the original game play on gamecube.
Rated 5 out of 5 by Kag30okmai from Classic game on classic system. Controls can be a bit of learning curve, but overall vary enjoyable
Rated 5 out of 5 by Fish Sandwich from A classic collection Going in playing the first two games on the GameCube, I was apprehensive about the motion controls. While the motion controls on the original two Metroid Prime games were something I grew accustomed to, I feel as if they are a great addition to the game and reduce an abstraction between you and the game. All three games are incredibly solid and worth getting your hands on this collection.
Rated 5 out of 5 by Geechy91 from Brings back memories I bought this last week and immediately felt nostalgic when I started up Metroid prime 1. the only thing I had a problem with is the sensitivity of the wii remote is a little finicky, but I think I had placed the sensor bar too close or not level where I was playing.
Rated 5 out of 5 by Kadosho from An unexpected find This collection was something I have been trying to find for a long time. Thankful to finally have it in my collection.
Rated 5 out of 5 by TacoDood from An excellent example of Nintendos greatest work. I grew up playing metroid games and always loved them, it wasn't till I was much older i realized how beautiful these games are. When you take into consideration that the hardware the gamecube and wii were working with its astounding that they were able to pack so much into the scenery. The music is absolutely brilliant and in my opinion is some of the most original music in the Nintendo library. Overall I give this game a strong recommendation.
Rated 5 out of 5 by Corbenik42 from Great Controls Amazing. Plenty of extras, and the best overhaul of the control scheme to match the Wii's controller.

Hello metroid prime trilogy is only &nbsp;disc or With case&nbsp;

Asked by: Daniel7742
Hi, in my case was the original disc with the ugly Gamestop replacement case :(
Answered by: manuzark

Will the metal case be included with my purchase?

Asked by: Jake1993
No :( I was surprised too when I received the game, comes with the generic Gamestop 2nd hand plastic game case without the original cover or anything.
Answered by: manuzark 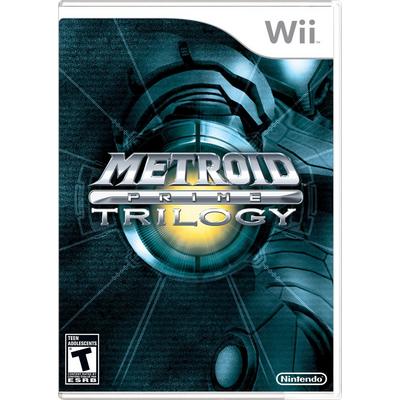